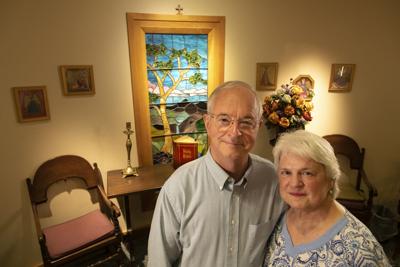 Sometimes when people show up for the Friday night Celebrate Recovery meetings at the Bridge Community Church in Warrenton, they’re hesitant to leave their cars. Greeters are assigned to the parking lot to welcome them.

“People have so much shame and embarrassment and they’re fearful of coming in and exposing too much of themselves,” said Pat Smith. “But that’s exactly what will set them free and put them on a journey to recovery.”

But recovery from addiction is an intensely personal and unpredictable matter. What works for one person may do little to keep another from relapsing. For many years, the treatment model of choice has been built around abstinence and accountability, epitomized by 12-step, peer-to-peer support groups, such as Alcoholics Anonymous (AA) and Narcotics Anonymous (NA). Celebrate Recovery (CR) follows many of the same principles, only with a sharp focus on the scriptures.

In recent years, however, attitudes about recovery have begun to shift, particularly among medical and public health officials. More now advocate combining counseling and behavioral therapy with medication-assisted treatment (MAT), in which addicts are prescribed FDA-approved drugs that reduce cravings and suppress withdrawal symptoms as they try to rebuild their lives. A 2016 report from the U.S. surgeon general’s office, titled Facing Addiction in America, concluded that MAT “is a highly effective treatment option for individuals with alcohol and opioid use disorders. Studies have repeatedly demonstrated the efficacy of MAT in reducing illicit drug use and overdose deaths, improving retention in treatment and reducing HIV transmission.”

For Pat Smith and her husband, Wally, though, the fight against opioid addiction is intertwined with their faith. Both are chaplains at Fauquier Hospital. He is also chaplain for the Warrenton Police Department. Seven years ago, she started a local version of Celebrate Recovery at the Bridge Church. She did so at the suggestion of their son, Brian, who went through numerous treatment programs during a 15-year battle with addiction before dying of a heroin overdose in 2016 at 31. His first exposure to opioids came when he was 14; he was prescribed OxyContin after knee surgery.

“He said, ‘Mom, I’ve been in so many programs, and the best one is Celebrate Recovery because it deals with the entire person,’” Pat Smith recalled. Its focus, she noted, is not just on helping people deal with drug addiction and alcoholism, but also anger issues, food or sexual addictions, even loneliness. After Brian’s death, she started another Celebrate Recovery program for inmates at the Fauquier County Jail.

She believes Celebrate Recovery can be effective because “it’s a safe, confidential space for sharing all the junk in your life. You see how other people dealt with their horrible life issues, and it makes you think, if they can do that, I can surely do it.”

Brian, she said, had been dubious about medication-assisted treatment, which he saw as just using one drug to counteract another. He told his parents that he had been able to trade his prescription medication Suboxone for heroin on the street.

That’s a criticism of Suboxone, the brand name for a drug that is frequently used in MAT. Because it’s dispensed in a monthly supply of either tablets or small strips of film held under the tongue, addicts can trade or sell it illegally.

To prevent that from happening, doctors will require Suboxone patients to follow a regimen that allows their use to be closely tracked. “Patients on Suboxone have certain responsibilities,” said Ash Diwan, a Fauquier physician certified to provide medication-assisted treatment. “Once we prescribe it, we’ll do random pill counts with them to make sure a person is using it as prescribed, and that they still have the rest of the medication they’re supposed to take for the month. We’ll make sure they’re going to counseling. Every four to six months, we’ll try to lower the dosage.”

Suboxone is meant to be a replacement medication that essentially buys time, stabilizing an addict’s overpowering cravings so they can get the most benefit from therapy. Diwan’s goal is to prescribe it for a person for a year or two so “they can get their life back together.”

“Suboxone is a tool, not a cure,” said Alta DeRoo, a longtime obstetrician and board-certified addiction physician who now works in the SaVida Health office in Culpeper. “Opioids have really diseased their brains. They need time to rehabilitate their brains and their habits back to normalcy.”

Since such a high percentage of inmates struggle with substance abuse — the U.S. Bureau of Justice Statistics estimates that nearly two-thirds are drug dependent or drug abusers -- some local and county jails have begun to offer MAT programs. It’s still less than 10 percent, but as jails have become a front line in the opioid epidemic, more are exploring how medications like Suboxone and Vivitrol can help inmates avoid relapses and overdoses when they return to the outside world. Vivitrol, another FDA-approved medication, prevents someone from getting high if they use opioids.

There is some early research reflecting the impact of jail MAT programs. After Rhode Island instituted MAT in 2016, the percentage of fatal overdoses involving people recently incarcerated dropped from 15 percent to 6 percent of the total deaths. In Virginia’s Piedmont, the Fauquier County Jail and the Prince William County Adult Detention Center are setting up MAT programs.

But the majority of those with an opioid addiction aren’t in jail — roughly two-thirds, according to the National Institutes of Health. If they want to try to recover by using MAT, though, it can be difficult to find doctors who can prescribe the medications. One of the ironies of the opioid epidemic is that any doctor can prescribe painkillers, but if physicians want to give patients Suboxone or buprenorphine (one of its principal ingredients) to treat addiction, they must first take an additional eight hours of special training and receive a federal waiver from the Substance Abuse and Mental Health Services Administration. According to SAMHSA, fewer than 7 percent of U.S. doctors have the required waiver.

Part of the reason is that many family-practice doctors haven’t had a lot of experience in treating opioid addiction and may be reluctant to ask patients about whether or how they use opioids.

“There’s been slow progress in the medical community in this regard,” said Diwan. “If you’re not really trained with it and are not really sure what to do, you may avoid screening for this when you meet with patients. But unless you actually screen, you never know who’s in this situation — from the soccer mom to the tree worker to a physician.”

DeRoo said the stigma of addiction also can play a role.

“You have to have buy-in from the doctors,” she said.  “Some doctors will say I don’t want that population in my office. But those people are already in their office. Addicts are people like you and me.”

The region suffers from a shortage of opioid addiction treatment centers