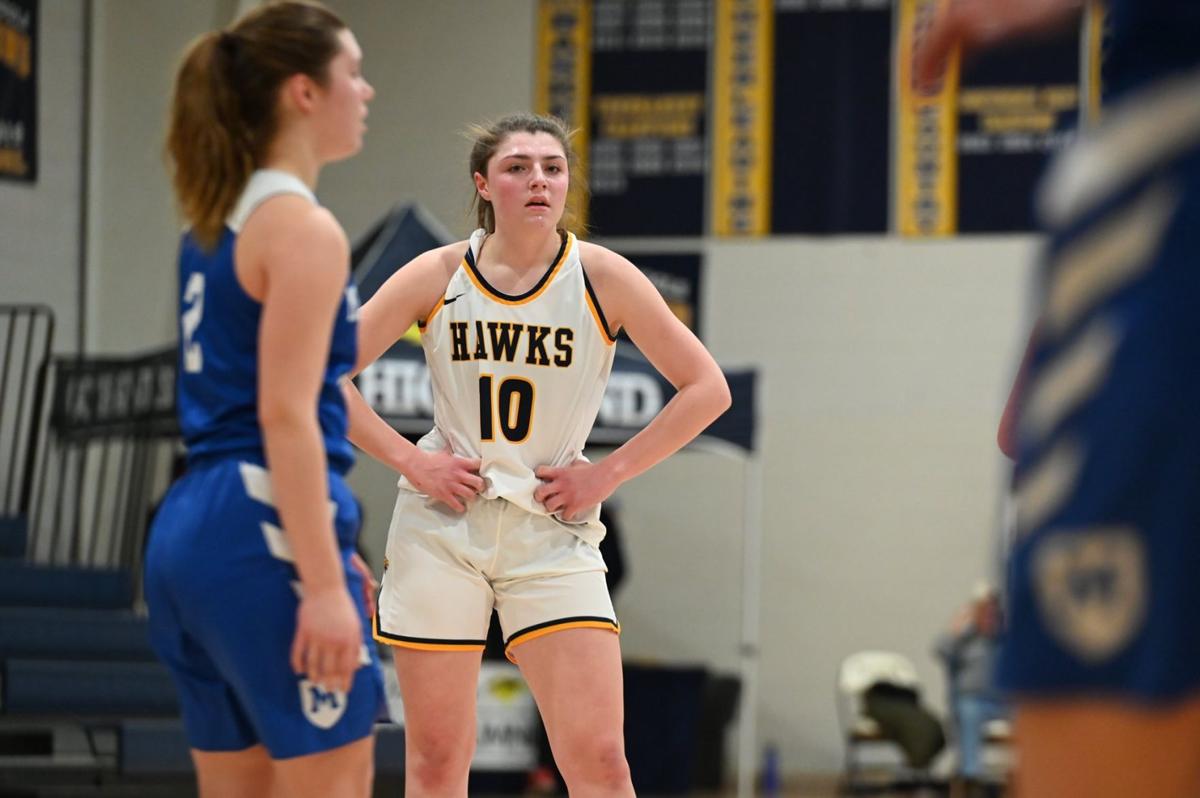 McKenzie Andrews (pictured earlier this season) recorded her fourth double-double of the season Thursday during Highland's 56-34 win over Seton. 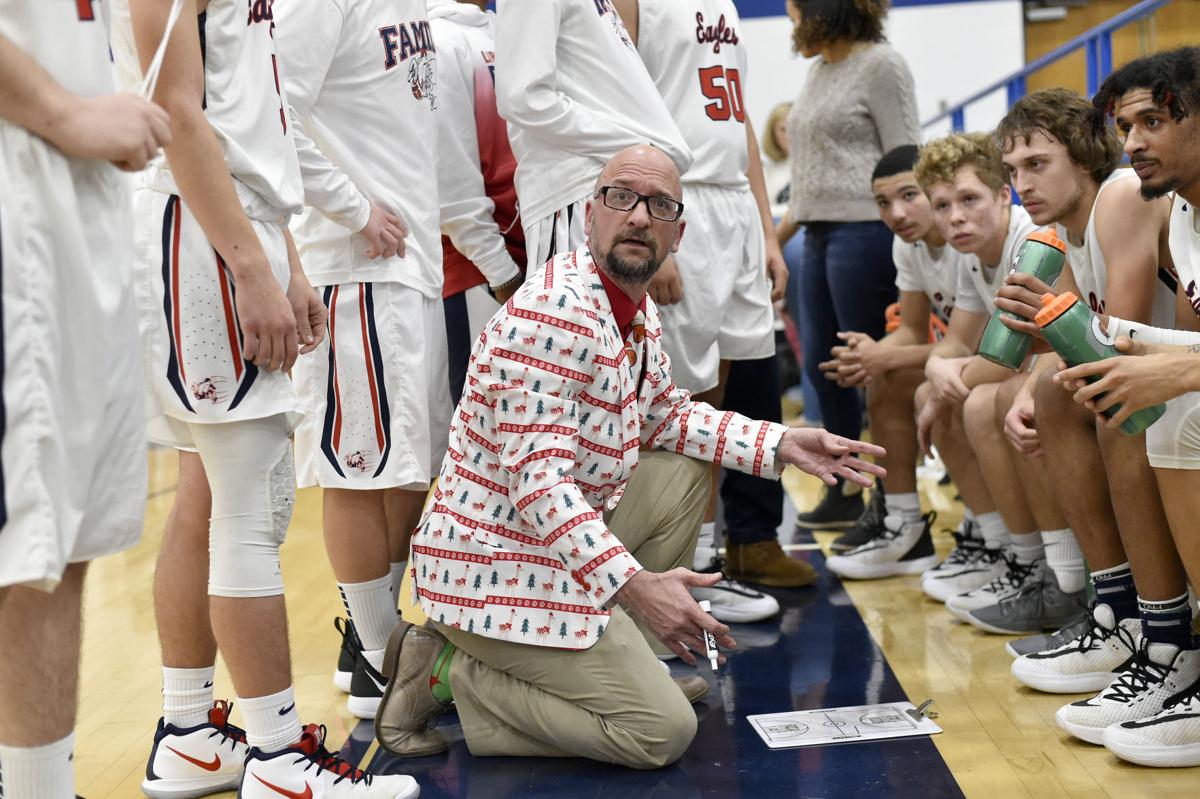 The Highland Hawks’ four swimmers earned six medals in their eight events Saturday with six season-best times during the Delaney Athletic Conference championships at the WARF.

Madisyn Carter led Highland by setting a DAC time record to win the girls 100-yard butterfly and placing third in the 200 individual medley. Paris Thornburg added a pair of runner-up finishes in the 50 freestyle and 100 breaststroke, while Morgan Malinow took third in the 200 free and 500 free.

The Liberty Eagles allowed only eight points in each of the opening two quarter Friday to build a lead big enough to beat Culpeper’s boys basketball team 78-65 on the road.

So they boosted their record to 13-9 overall and 8-6 in the Class 4 Northwestern District thanks to a previous 56-50 win Thursday over James Wood, meaning Liberty finished the district regular season standings tied for second with Handley and Wood. Nonetheless, based on the head-to-head tiebreaker procedure, the Judges received the No. 2 seed for the Northwestern tournament with the Colonels at No. 3 and the Eagles at No. 4.

So Liberty will host No. 5 Fauquier in the tournament quarterfinals Thursday.

Against Culpeper, the Eagles used an early 15-5 run to take a 23-8 lead by the end of the first quarter. They went 4-for-7 on 3-pointers in the period with Russell Morton going 2-for-2 and Bryan Barnes and Dakota Lindsay adding one each to help Liberty build a 50-16 lead by halftime.

“I feel like that is what we’re capable of every night and how we’re supposed to come out,” the Eagles’ Derrick Brooks said. “It was good how the starters come out with the right energy and how the bench came in with the same energy of the starters.”

He finished with 17 points while Morton had 18, Bryan Barnes had 15, Coy Shepard had nine and Hunter Humphries had seven. So Liberty easily won despite being outscored 22-17 in the third period and 27-11 in the fourth.

Previously, on Thursday, the Eagles composed a similarly strong first half for a 28-18 lead on the road in Winchester after losing to the same James Wood team at home Tuesday on senior night, 55-40.

During their 55-40 revenge win over the Colonels, the Eagles used an initial 10-3 run to end the first quarter with a 10-7 lead before going on an 18-11 run as Hunter Humphries made two 3-pointers in the final two minutes of the first half.

Liberty expanded that lead to 39-22 in the third period, but the Colonels ended the quarter on a 13-2 run to cut their deficit to 41-35 going into the fourth. Then Liberty’s Barnes scored nine of his game-high 24 points in the final period to keep James Wood at bay.

“The key was playing our style and speeding the game up,” Barnes said. “That’s when we play best. We also moved the ball well and hit the shots in the flow of the offense.”

Coy Shepard added 12 points for the Eagles while Morton had eight and Humphries had six. Tre White, meanwhile, controlled the paint with 12 rebounds.

“After the James Wood loss on Tuesday, the guys did a great job bouncing back to get two road wins,” Frazer said. “We have a tough road ahead of us [in the district tournament], but we are excited to play at home and can’t wait to get started.”

The Highland Hawks extended their winning streak to four games Friday with a 63-10 win over the Fairfax Home School girls basketball team in Warrenton after exacting revenge against Seton on Thursday with a 56-34 victory over the Conquistadors, also in Warrenton.

The win over Seton gave Highland sole possession of first place in the DAC at 7-1 after the Conquistadors (7-2) previously beat the Hawks 52-49 in overtime Jan. 23. The Hawks also stand at 16-6 overall after they built a 45-27 lead over Seton by the end of the third quarter.

“It was nice to see our kids show great determination and resolve,” Highland coach Diana Martinez said of winning the rematch. “Although we have much to improve upon, we made big plays when they mattered the most.”

Megan Kirby added 20 points with 4-for-7 3-point shooting and five assists while Abby Soltys and Caite Leake had six points each. Soltys also had six rebounds and four assists while Leake had five rebounds.

Andrews made a buzzer-beating 3-pointer in the first quarter to take a 13-6 lead by the end of the first quarter en route to an advantage as large as 27-16 in the second period. Seton narrowed its deficit to 28-21 by halftime, but the Hawks pulled away with a 17-6 run in the third quarter with Kirby beating the buzzer for an 18-point lead.

Against Fairfax, Highland took a 15-4 lead in the first quarter, a 35-4 advantage at halftime and a 55-6 lead entering the fourth period. Soltys had 14 points with 13 each from Kirby and Cochrane, while Gabby Brisbin had seven.

Soltys also had eight assists and seven steals while Cochrane had four steals. Adding seven rebounds each were Ashley Herzog, Andrews and Cochrane.