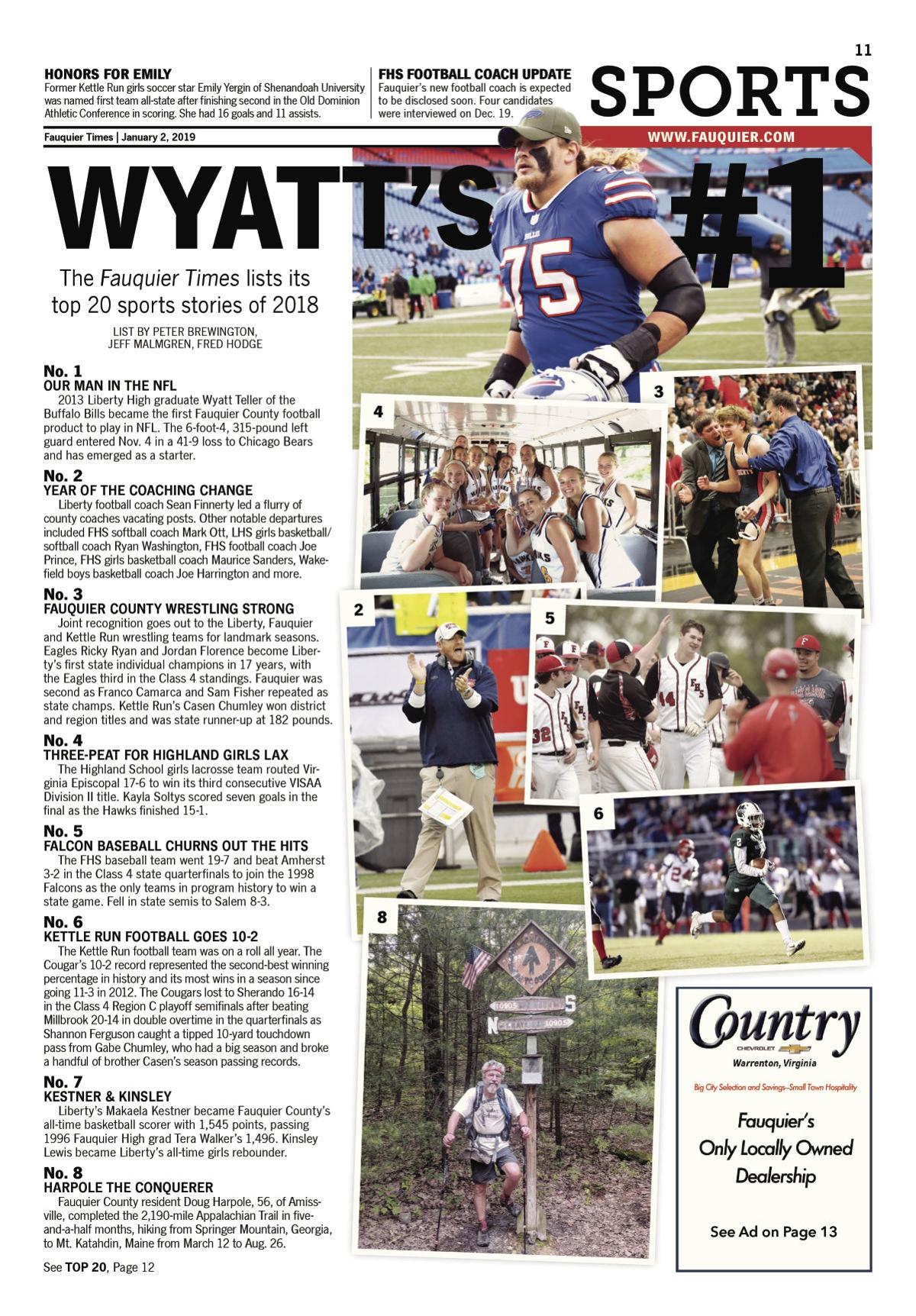 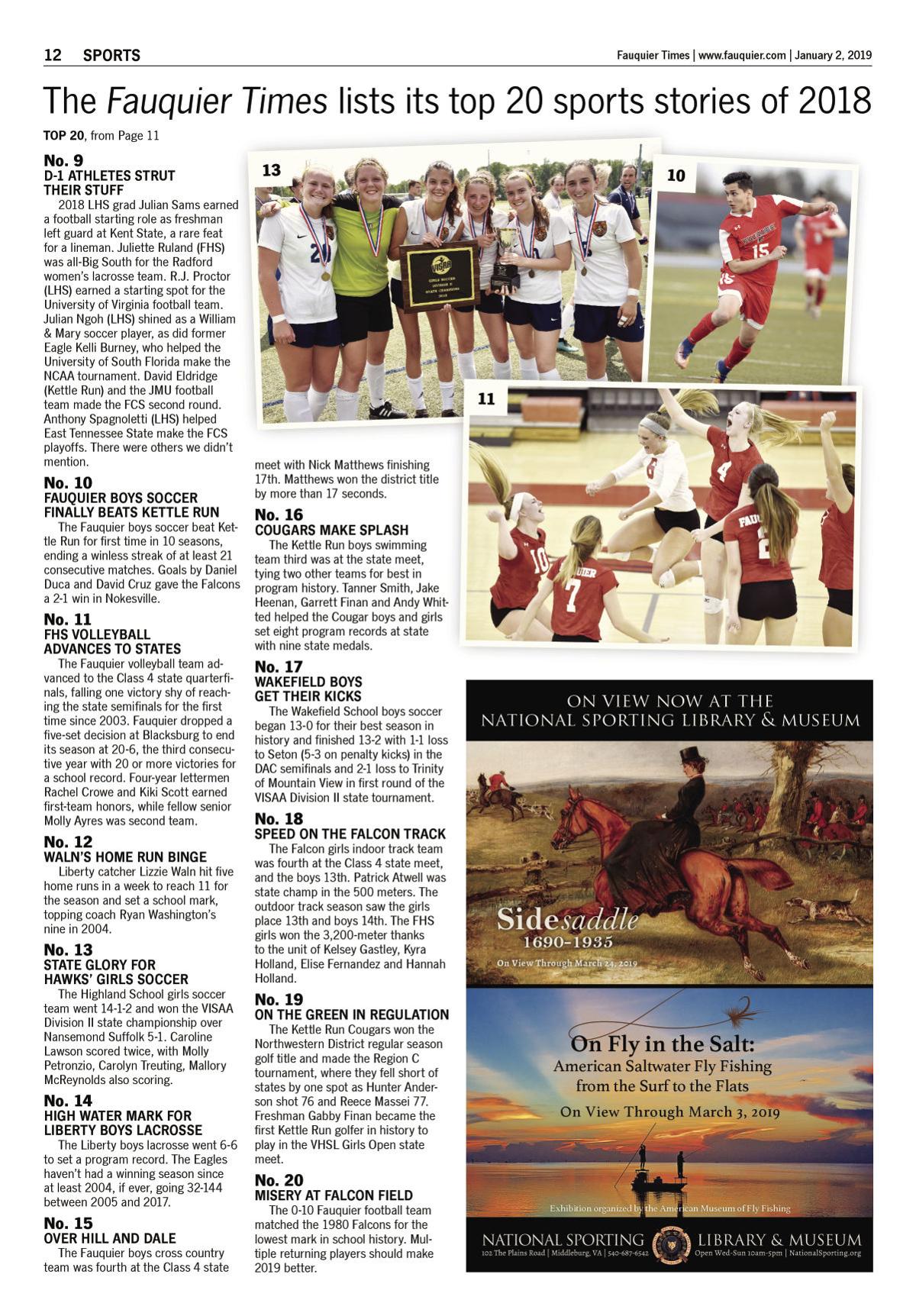 No. 1: Wyatt Teller plays in NFL

The 2013 Liberty High graduate became the first Fauquier County product to play in NFL after the Buffalo Bills drafted him. The 6-foot-4, 315-pound left guard entered Nov. 4 in a 41-9 loss to Chicago Bears and emerged as a starter afterward.

No. 2: Many county coaches leave teams

No. 3: Fauquier and Liberty place top-3 in state wrestling

The Hawks routed Virginia Episcopal 17-6 to win the VISAA Division II championship. They finished with a 15-1 record after beginning the season 12-0 as part of a 47-game winning streak that dated back to start of 2016 season.

The Falcons finished with a 19-7 record and beat Amherst 3-2 in the Class 4 quarterfinals to join the 1998 Falcons as the only teams in program history to win a state game. They lost in the state semifinals to Salem 8-3.

The Cougars’ 10-2 record represented the second-best winning percentage in program history and their most wins in a season since going 11-3 in 2012. The Cougars lost to Sherando 16-14 in the Class 4 Region C semifinals after beating Millbrook 20-14 in double overtime in the quarterfinals as Shannon Ferguson caught a tipped 10-yard touchdown pass from Gabe Chumley, who broke a handful of his brother Casen Chumley’s passing records.

The Falcons ended a winless streak of at least 21 consecutive matches that spanned the entire history of their rivalry with the Cougars. Goals by Daniel Duca and David Cruz gave the Falcons a 2-1 win in Nokesville.

The Falcons lost in the Class 4 state quarterfinals, falling one victory shy of reaching the semifinals for the first time since 2003. Fauquier dropped a five-set decision at Blacksburg to end its season at 20-6, the third consecutive season with 20 or more victories for a school record.

The catcher hit five home runs in a week to reach 11 for the season, topping the nine that Eagles coach Ryan Washington hit in 2004 as a player.

The Eagles went 6-6 after entering the spring without more than five wins in a season. They amassed only a 32-144 record between 2005 and 2017. She helped Liberty finish with a 17-7 record an an appearance in the Class 4 Region C semifinals, falling one win short of the Eagles' first state berth since 2012.

No. 15: Fauquier runs to best region finish in more than 18 seasons

The Falcons finished as the Class 4 Region C runner-up, tying for their best region placement in at least 19 years. Nick Matthews placed seventh to tie for the Falcons’ top boys individual region placement in that same span. Fauquier then placed fourth at the state meet with Matthews finishing 17th.

No. 17: Wakefield sets record for wins in boys soccer season

The Owls began 13-0 for their best run in history and finished 13-2 with a 1-1 loss to Seton (5-3 on penalty kicks) in the Delaney Athletic Conference semifinals and a 2-1 loss to Trinity of Mountain View in first round of the VISAA Division II state tournament.

The Falcons placed fourth in the girls standings of the Class 4 indoor state meet while Patrick Atwell was the boys state champion in the 500-meter run. During the outdoor track season, Fauquier’s girls won the 3,200-meter relay thanks to the unit of Kelsey Gastley, Kyra Holland, Elise Fernandez and Hannah Holland.

With a 0-10 record, the Falcons matched their 1980 team for the lowest mark in the program’s history.