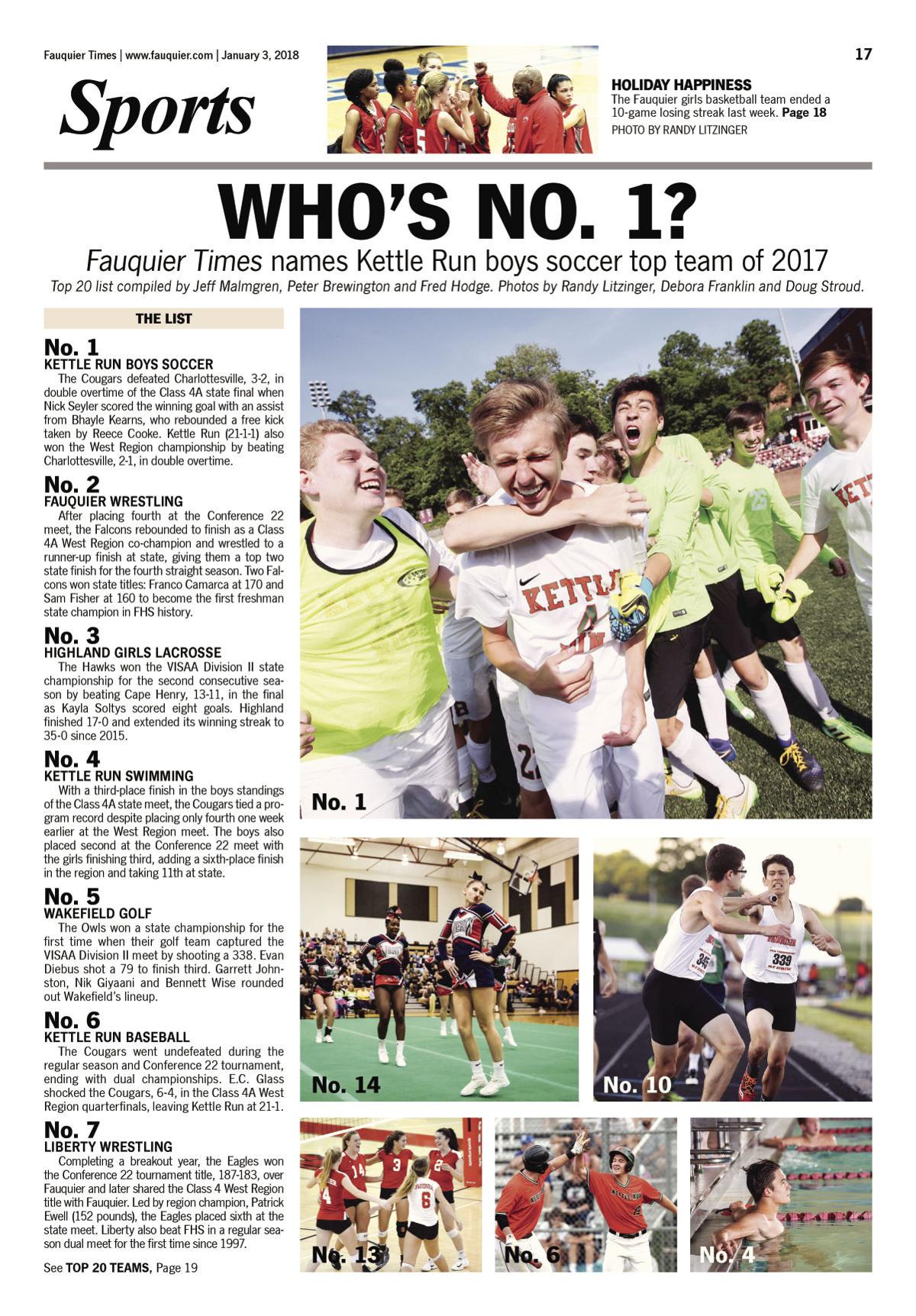 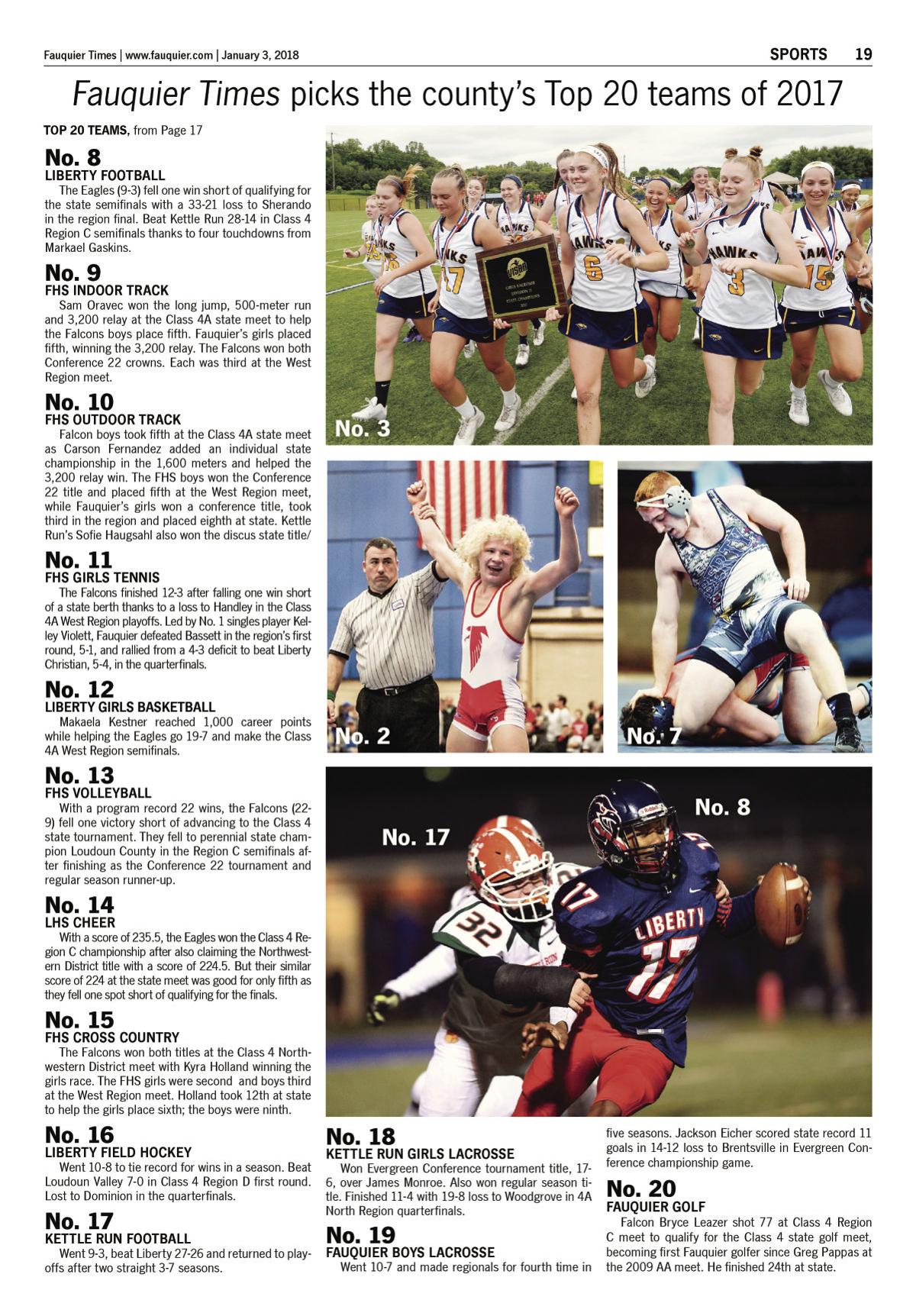 After placing fourth at the Conference 22 meet, the Falcons rebounded to finish as a Class 4A West Region co-champion and wrestled to a runner-up finish at state, giving them a top two state finish for the fourth consecutive season. Individually, Franco Camarca won the 170-pound state title with Sam Fisher winning at 160 to become the first freshman state champion in Fauquier history.

The Hawks won the VISAA Division II state championship for the second consecutive season by beating Cape Henry, 13-11, in the final with Kayla Soltys scoring eight goals. So Highland finished with a 17-0 record and extended its winning streak to 35-0 dating back to 2015.

With a third-place finish in the boys standings of the Class 4A state meet, the Cougars tied a program record despite placing only fourth one week earlier at the West Region meet. The boys also placed second at the Conference 22 meet with the girls finishing third, adding a sixth-place finish in the region and taking 11th at state.

The Owls won a state championship for the first time in its sports history when their golf team placed first at the VISAA Division II meet by shooting a 338. Evan Diebus shot a 79 to finish third individually, while Garrett Johnston, Nik Giyaani and Bennett Wise rounded out Wakefield’s lineup and helped the Owls win their second consecutive Delaney Athletic Conference title.

The Cougars went undefeated during the regular season and Conference 22 tournament, ending with dual championships. E.C. Glass then shocked them, 6-4, in the Class 4A West Region quarterfinals, leaving Kettle Run with a 21-1 final record.

For the first time in their 23-year history, the Eagles won a district-level championship by beating Fauquier for the Conference 22 tournament title, 187-183. They went on to share the Class 4 West Region title with Fauquier as Patrick Ewell became Liberty’s first individual champion (152 pounds) since 2009, and the Eagles then placed sixth at the state meet.

After losing to Kettle Run during the regular season, the Eagles got revenge in the Class 4 Region C semifinals with a 28-14 win over the Cougars thanks to four touchdowns from Markael Gaskins. The Eagles then fell only one win short of qualifying for state with a 33-21 loss to Sherando in the region final, so they ended with a 9-3 record.

Sam Oravec won the long jump, 500-meter run and 3,200 relay at the Class 4A state meet to help the Falcons place fifth in the boys standings, while Fauquier’s girls placed fifth, winning the 3,200 relay. The Falcons also earlier won the boys and girls Conference 22 championships, and they each placed third at the West Region meet.

En route to a fifth-place boys finish at the Class 4A state meet, the Falcons won the Conference 22 championship and placed fifth at the West Region meet, while Fauquier’s girls won a conference title, took third in the region and placed eighth at state. Carson Fernandez added an individual state championship in the 1,600-meter run and helped the 3,200 relay win (Kettle Run’s Sofie Haugsahl also won the discus state title).

The Falcons finished with a 12-3 record after falling one win short of a state berth thanks to a loss to Handley in the Class 4A West Region playoffs. Led by No. 1 singles player Kelley Violett, Fauquier qualified for region play for the ninth consecutive season, defeating Bassett in the first round, 5-1, and rallying from a 4-3 deficit to beat Liberty Christian, 5-4, in the quarterfinals.

Makaela Kestner reached 1,000 career points while helping the Eagles amass a 19-7 record with an appearance in the Class 4A West Region playoffs. They advanced by beating Jefferson Forest in the first round, 67-24, but then lost to Loudoun County, 58-48, in the quarterfinals after finishing as the Conference 22 tournament runner-up.

With a program record 22 wins, the Falcons (229) fell one victory short of advancing to the Class 4 state tournament. They fell to perennial state champion Loudoun County in the Region C semifinals after finishing as the Conference 22 tournament and regular season runner-up.

With a score of 235.5 at the Class 4 Region C meet, the Eagles won a region championship for the first time in history after also claiming the Northwestern District title with a score of 224.5. But their similar score of 224 at the state meet was good for only fifth as they fell one spot short of qualifying for the finals.

The Falcons won both titles at the Class 4 Northwestern District meet with Kyra Holland finishing first individually in the girls race. She then placed fourth at the West Region meet to help the girls finish second (boys third) and she took 12th at state to help the girls place sixth (boys ninth).

The Eagles tied a record for wins in a season by finishing with a 10-8 record. They beat Loudoun Valley, 7-0, in the Class 4 Region D first round before losing to Dominion in the quarterfinals.

The Cougars won the Evergreen Conference tournament championship over James Monroe, 17-6, after also winning the regular season title. They then finished with an 11-4 record after a 19-8 loss to Woodgrove in 4A North Region quarterfinals.

The Falcons qualified for region play for the fourth time in five seasons, finishing with a 10-7 record after losing to Freedom in the Class 4A North Region quarterfinals, 16-3. Jackson Eicher scored state-record 11 goals during a 14-12 loss to Brentsville in Evergreen Conference championship game.

The Falcons’ Bryce Leazer became the first player since 2009 to qualify for a state meet by shooting a 77 at the Class 4 Region C meet. He then finished 24th at state, giving Fauquier one of its best placements in state history.