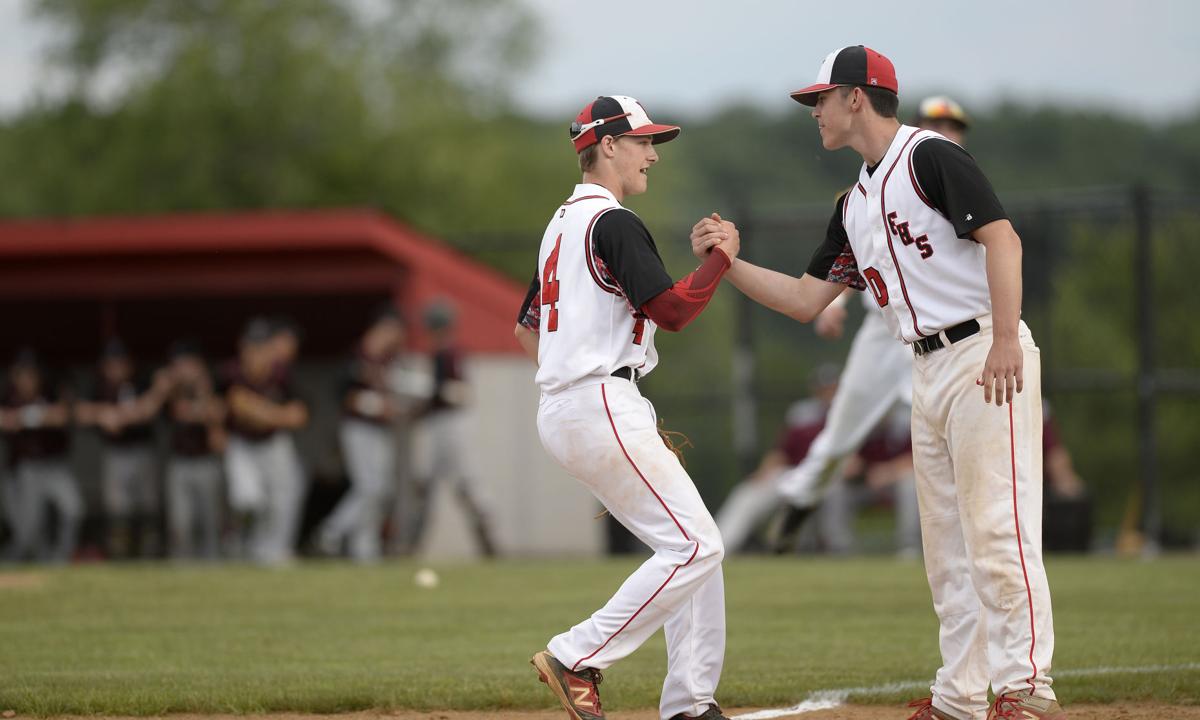 Dustin Donnor congratulates Blaze O'Saben (4) during a 3-2 victory Tuesday over Amherst during the Class 4 state quarterfinals in Warrenton. 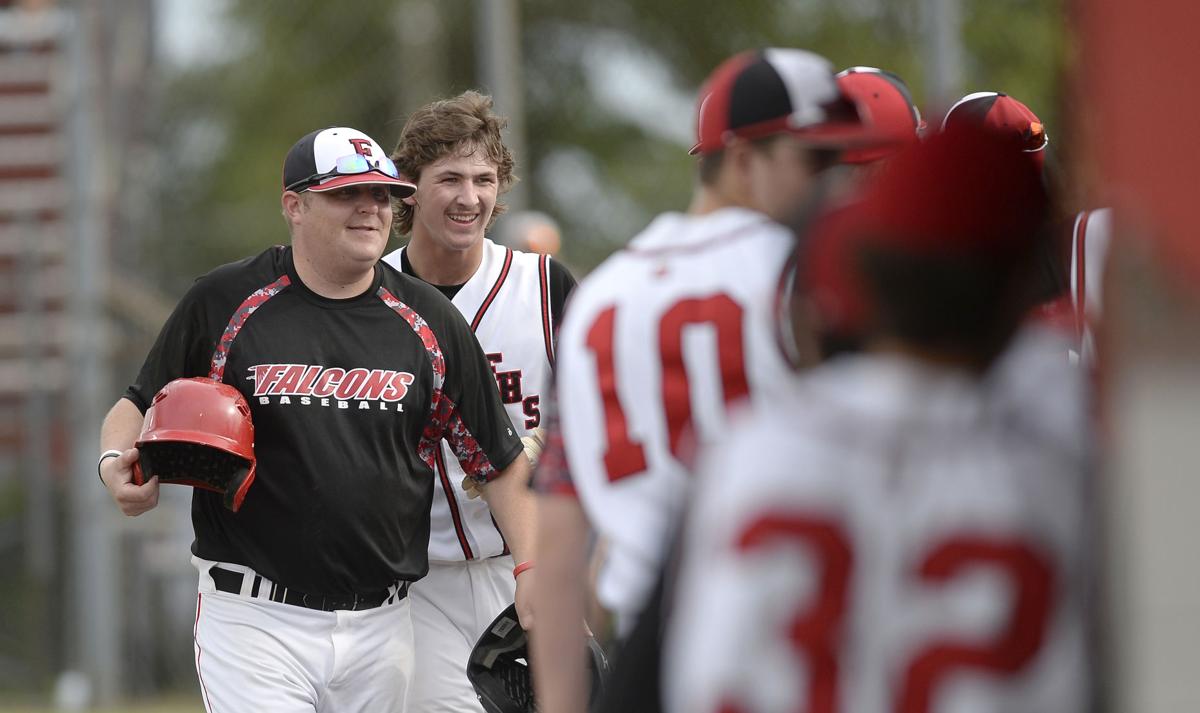 Troy Smith, center, smiles during a 3-2 victory Tuesday over Amherst during the Class 4 state quarterfinals in Warrenton. 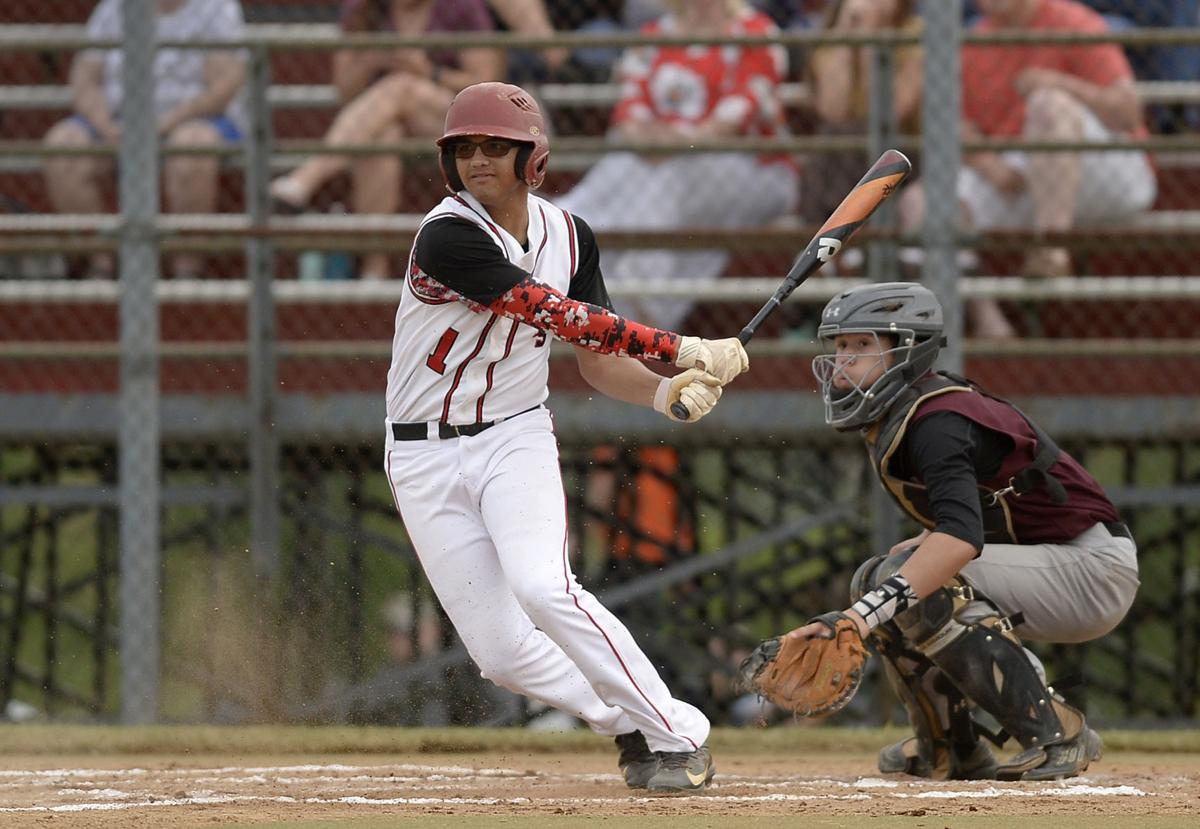 Haiden Smith puts the ball in play Tuesday during a 3-2 victory over Amherst in the Class 4 state quarterfinals in Warrenton. 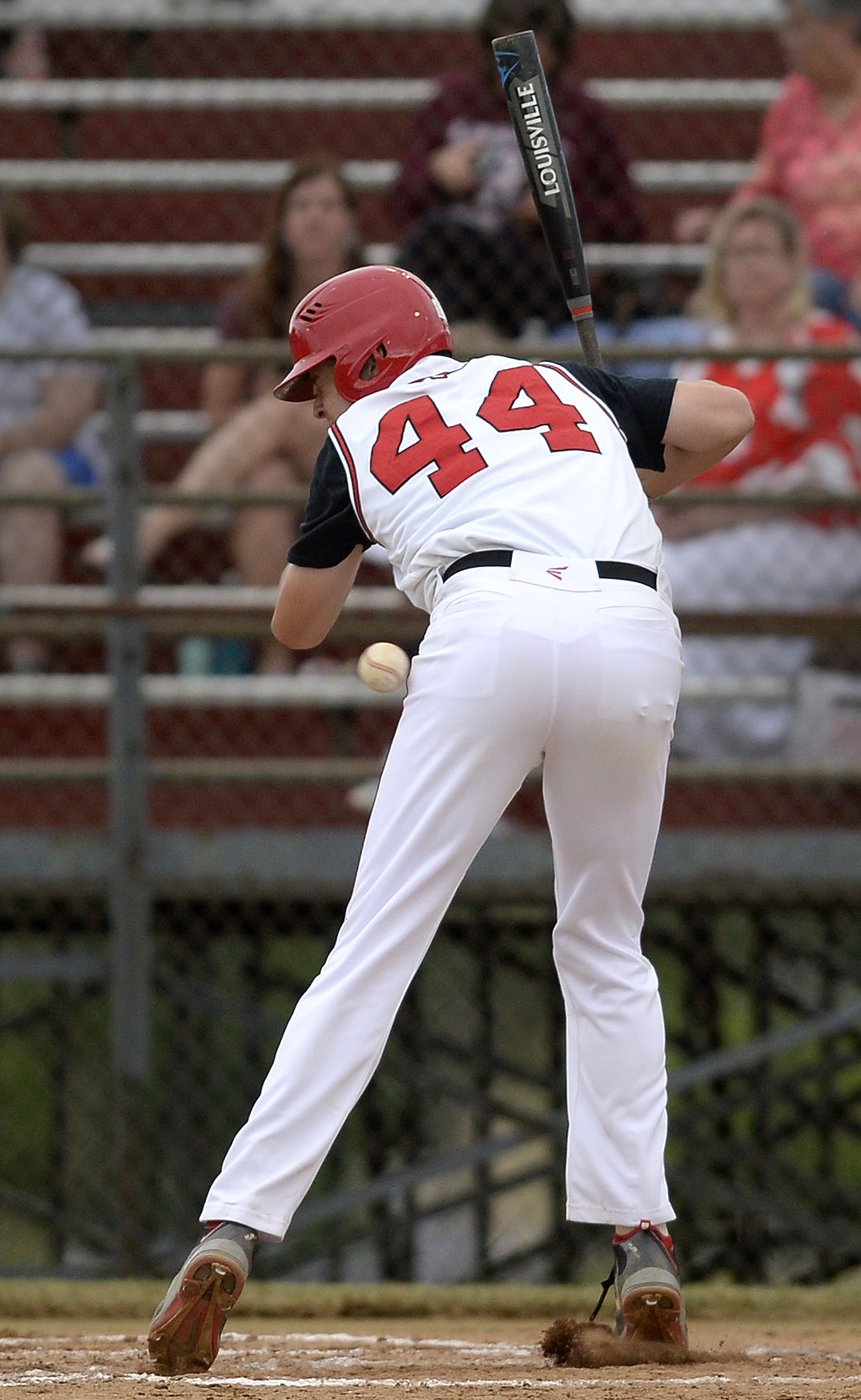 Fauquier's Lane Pearson absorbs a pitch to the body to reach base in the third inning of a 3-2 victory Tuesday over Amherst during the Class 4 state quarterfinals in Warrenton.

Dustin Donnor congratulates Blaze O'Saben (4) during a 3-2 victory Tuesday over Amherst during the Class 4 state quarterfinals in Warrenton.

Troy Smith, center, smiles during a 3-2 victory Tuesday over Amherst during the Class 4 state quarterfinals in Warrenton.

Haiden Smith puts the ball in play Tuesday during a 3-2 victory over Amherst in the Class 4 state quarterfinals in Warrenton.

Fauquier's Lane Pearson absorbs a pitch to the body to reach base in the third inning of a 3-2 victory Tuesday over Amherst during the Class 4 state quarterfinals in Warrenton.

But they made their presence felt Tuesday by beating Amherst, 3-2, during the Class 4 state quarterfinals at home in Warrenton with McCusker hitting a two-run single and pitching 2 2/3 innings for the save. So the 2018 Falcons joined the 1998 Falcons as the only teams in program history to win a state game.

They will do so Friday against Salem during the state semifinals at Kiwanis Field in Salem.

The Falcons also played on that field during the 1998 Group AA state semifinals, losing to Dan River, 3-2, after winning a quarterfinals game against Grafton, 14-3, while making the first state appearance in Fauquier baseball history.

Fauquier returned to the AA state tournament in 2004 but lost in the quarterfinals. O’Saben then led the Falcons to a Class 4 state appearance in 2015, but they lost in the semifinals, which served as the first round of state that season.

So the Falcons have an all-time record of 2-3 at state, but they also have a 19-6 record this season with a run of unexpected postseason victories that have them feeling excited and confident.

“Gotta win it all for the home town,” McCusker said. “We got here, so we might as well finish it off. We’ve got nothing to lose. Nobody expected us to be here.”

The Falcons won the Class 4 Northwestern District regular season championship, but then they lost the district tournament title to Millbrook, 15-11. So they had to play on the road during the Region 4C semifinals against Riverside, a team ranked No. 1 by NOVA Baseball Magazine at the time.

Fauquier, then ranked No. 14, upset Riverside, 8-6, before winning the region final over No. 9 Woodgrove, 9-3, to give the Falcons only their second region championship in program history.

“Maybe at some point in time folks will look at Fauquier [High School] and Kettle Run, and all the other kids that are coming out of this area, with a little more respect for how well we play the game of baseball,” O’Saben said. “You see a lot [of attention given to] all the Prince William and the Loudoun kids, but I kind of feel like a lot of times the Fauquier kids get left out.”

Kettle Run advanced to the 2016 Class 4A state semifinals and has qualified for region play in seven of the past nine seasons.

The Falcons, meanwhile, carried the torch this spring.

“I think these guys take a lot of pride in that, especially because these guys wear ‘Fauquier’ on their chest,” O’Saben said. “They feel that they’re really repping the entire county when they go out there.”

The Falcons found a lot of support in the Athey Field stands Tuesday as they took a 2-0 lead in the bottom of the first inning and responded to an Amherst run in the fourth by scoring a run in the fifth before escaping with a win in the seventh by limiting the Lancers to only one more run.

“This is by far the most people, I think, that have ever been here,” Western said. “A lot louder.”

“This place was packed,” he said. “That was awesome. The parking lot started filling up” early.

Amherst almost made it a long ride home for the Falcons by putting runners on first and second base with only one out in the top of the seventh inning and Fauquier leading 3-1. Tyler Knight then hit a two-out RBI single that narrowed the Lancers’ deficit to one run while advancing a runner to third base.

“Feeling pretty good” at that point, Amherst coach Joey Crawford said. “Because once you get a runner to third [all that’s needed is] a passed ball, wild pitch, a little blooper, anything like that. … I thought we had a really good shot.”

Devin Sandidge stepped to the plate with that runner on third and went ahead in the count, 2-1, against McCusker.

Sandidge did exactly that with a ground-out to Western, Fauquier’s second baseman.

“Relief,” Western said of fielding the ball cleanly and throwing it to first. “But we’ve been in [pressure] situations like that a lot this year. … You kind of get used to it.”

So McCusker earned the save after allowing one run on four hits and two walks while striking out two.

“I don’t know what was happening to me,” the junior said of the seventh inning. “I started babying the ball a little bit.

“Then I just heard Coach Matt yell, ‘Throw it’ from the dugout, because I was aiming it more than throwing it,” McCusker said. “Once I heard that, and got that through my head, I just started … throwing more strikes.”

So Fauquier won a game while scoring fewer than five runs for only the third time this season. The Falcons’ offense has often fueled their success, so they entered the game with a 2-3 record when scoring no more than four runs.

“It’s frustrating,” Crawford said of losing despite allowing only three runs, “but at the same time we understand that’s a really good baseball team. … That’s one of the best teams in the state.”

Amherst struggled to score thanks to Fauquier’s pitching and defense. The Falcons committed only one error while the Lancers made three, and Fauquier starting pitcher Lane Pearson earned the win by allowing only one run on two hits and two walks while striking out three over 4 1/3 innings.

“Both of their pitchers are good,” Crawford said. “They pitched really well, but we had some opportunities and we left some runners on base when we needed to drive them in. That’s ultimately what this game comes down to.”

The Lancers left eight runners on base, but Fauquier stranded seven and hit into two double plays. So the Falcons’ two-run first inning proved important.

Troy Smith reached on an error with one out in the first and Blaze O’Saben moved him to third with a double. McCusker then battled to a full-count against Amherst starting pitcher Tyler Knight. On the eighth pitch, McCusker hit a single off the handle of his bat with it looping over the head of the Lancers’ second baseman for a pair of RBIs.

“Getting those two runs early was key,” Matt O’Saben said. “Really put the pressure on them.

“And I can’t say enough about the leadership that both Troy and Blaze have given us all season,” the coach said. “How hard we scrap and battle, that is 100 percent Troy and Blaze’s personality coming through.”

Western added what proved to be the winning run in the bottom of the fifth inning by hitting a single and scoring on an error. So Knight took the loss by allowing three runs (one earned) on four hits and five walks while striking out five over 5 1/3 innings.

McCusker led the Fauquier offense with two walks and a stolen base on 1-for-1 hitting, while Blaze O’Saben went 1-for-2 with a run, walk and steal.

Amherst’s Tyler Hargis finished with an RBI and steal on 2-for-3 hitting, while Kyle Orme went 1-for-2 with two steals, two walks, one RBI and one run.

Regardless, the Falcons won a state game on their home field after being forced to play on the road during the entire region tournament thanks to their loss to Millbrook at home during the district tournament final.

“The seniors left this field the other night ... not having won their last [home] game,” Matt O’Saben said of the district title game. “I kind of dwelled on that.

“I wanted to send these seniors – who have worked so hard for this program and done so much – out on a win here at home,” he said. “That meant the most to me.”

Salem wins 8-3 after Falcons tie deepest playoff run ever with Matt as coach, Blaze as shortstop