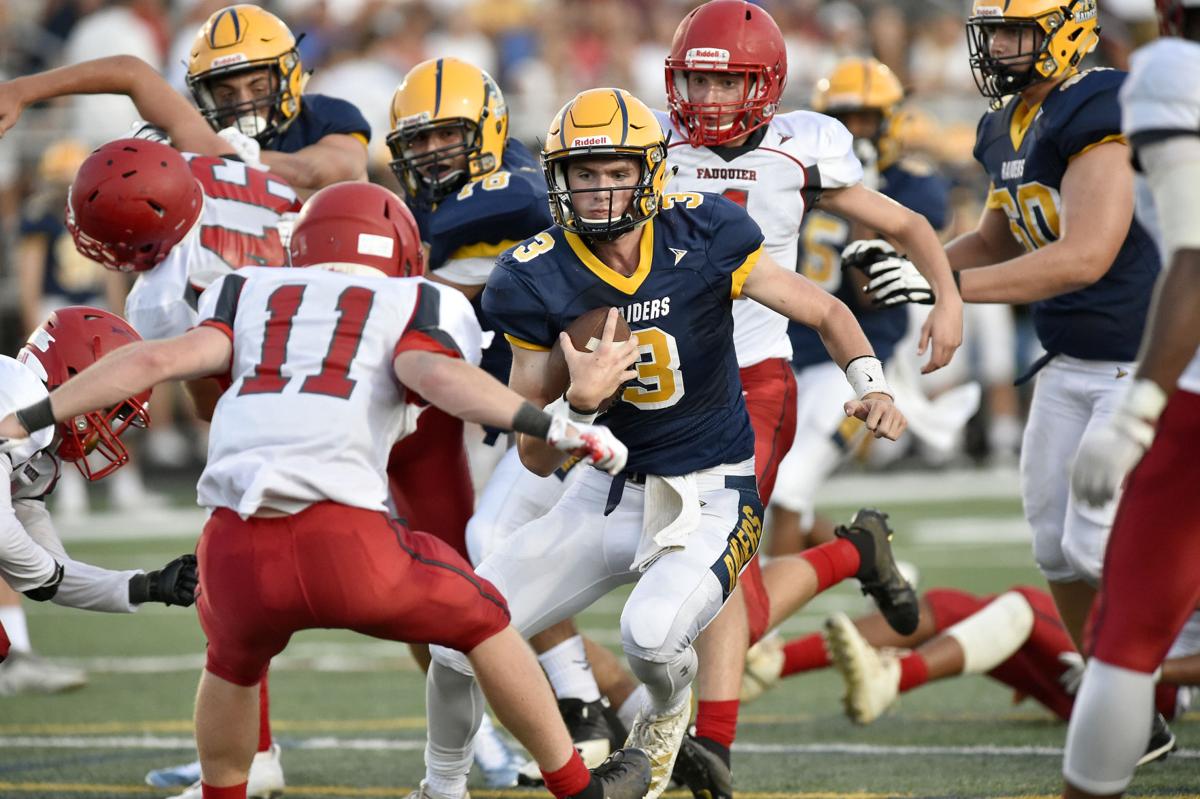 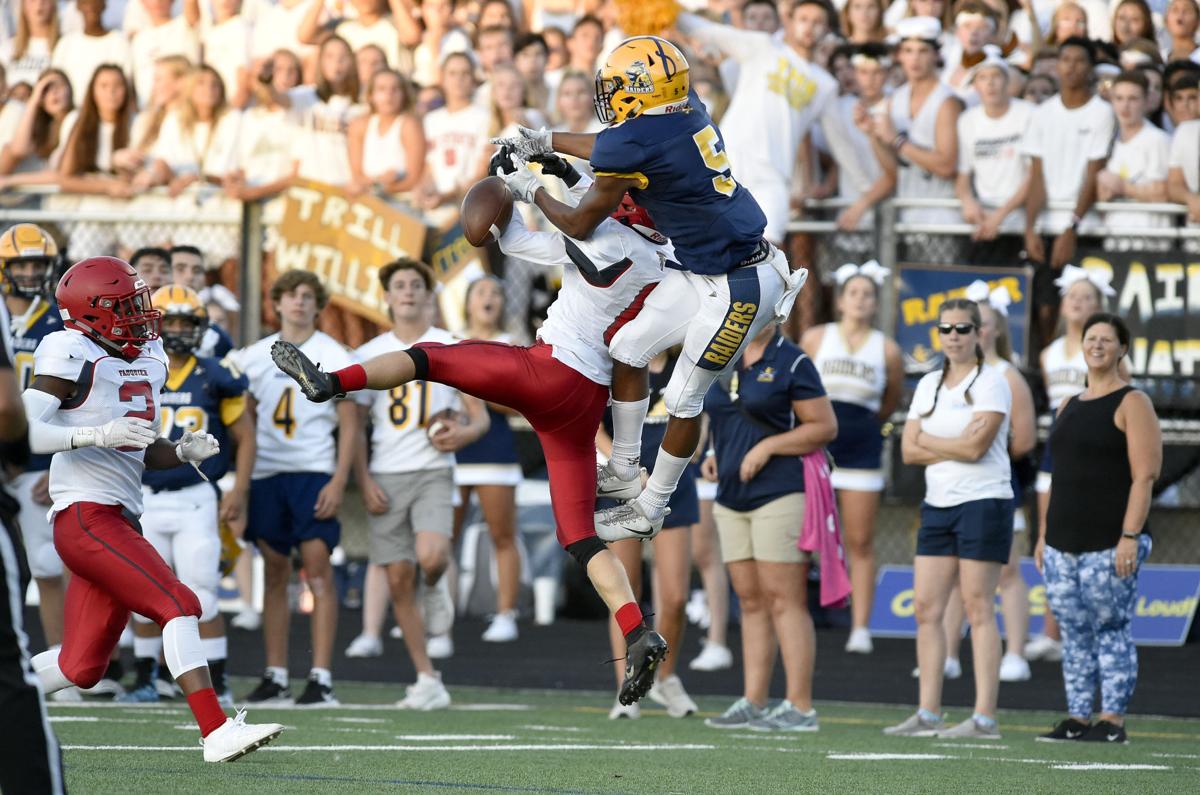 Fauquier's Andrew Oleny and Loudoun County's Tariq Sims battle for the ball Thursday during the Raiders' 31-0 win in Leesburg.

The Fauquier Falcons’ defense shined at times Thursday, once forcing Loudoun County’s football team into a third-and 55 situation and allowing only two touchdowns all night.

But the Falcons’ offense struggled, and their turnovers gave the Raiders a pair of fumble-return touchdowns during Loudoun’s 31-0 victory in Leesburg. That extended Fauquier’s losing streak to 13 consecutive games after it finished last season without a win for only the third time in history, going 0-10.

The Falcons held Loudoun County scoreless over the opening 11 minutes of the first quarter, but then Joseph Groves scored on a fumble recovery with 30 seconds remaining. It took another 11 minute for the Raiders to score again, so they led only 17-0 at halftime, but Fauquier still couldn’t recover.

“We went after them and it showed,” first-year Falcons head coach Karl Buckwalter said.

But “we basically gave up three touchdowns on turnovers,” he said. “It is a good teachable moment.”

When the Falcons forced Loudoun County into third-and-55, one of the Raiders’ most dangerous weapons took the field, punter Jimmy Kibble. He bombed a 53-yard punt to pin the Falcons in the shadow of their own goal post.

“Kibble’s dad was really good too, and he obviously taught him well,” Buckwalter said.

On the next play, Fauquier miffed a handoff and the ball fell into the hands of Groves, an outside linebacker who then scored.

“We had some mishaps,” Buckwalter said. “Our whole defense played really well and flew to the ball. Offensively we have to get some things going.”

Kibble had three punts that traveled over 50 yards in the air, made a 19-yard field goal and hit all three of his extra-point kicks.

Jimmy Kibble "is a great kicker. He is ranked really high,” said Loudoun County head coach Tony Rayburn. “We are lucky to have him. Our coverage doesn’t even have to be that good because he puts everything where it needs to be.”

Early in the second quarter, Groves found himself with another fumble recovery. He scampered 18 yards for the touchdown.

“A great player,” Rayburn said. “I wish we could have more of him on offense. He just makes plays wherever he is.

“Fauquier is a defensive football team that can make you look ugly at times,” the coach said. “We did a nice job on defense too. [But] if we don’t click on offense we are going to have a rough year.”

Fauquier’s offense didn’t record a first down until late in the third quarter, but senior defensive back Hershel Rinker nearly got the Falcons on the scoreboard when he jumped in front of a Gavin Pitts pass for an interception, then broke up the sideline. Unfortunately for the Falcons, Rinker was caught from behind.

“I knew a screen was coming and was able to pick it off,” Rinker said, “but I couldn’t shed the tackle.”

Rinker also deflected a pass earlier in the game, and he finished as one of the bright spots on both sides of the ball for the Falcons.

“I just try to encourage my offensive line and give theme emotional support,” said Rinker, a running back. “I try to give them as much faith as I can to keep everyone motivated.”

Fauquier’s best offensive play of the night came on a scamper from backup quarterback Evan Jackson, but Loudoun County stuffed the Falcons in the red zone.

For the Raiders, Pitts connected with Lucas McAllister for 70 yards down the sideline. Pitts followed it up with a 6-yard touchdown rush. Then back-to-back interceptions by the Raiders’ defense resulted in a 1-yard touchdown run from Josh Pettiford.

So Fauquier will enter next week with a 13-game losing streak and a home game against Brentsville.

“We just have to learn from what we did,” Buckwalter said. “We can’t dwell on what we don’t have.