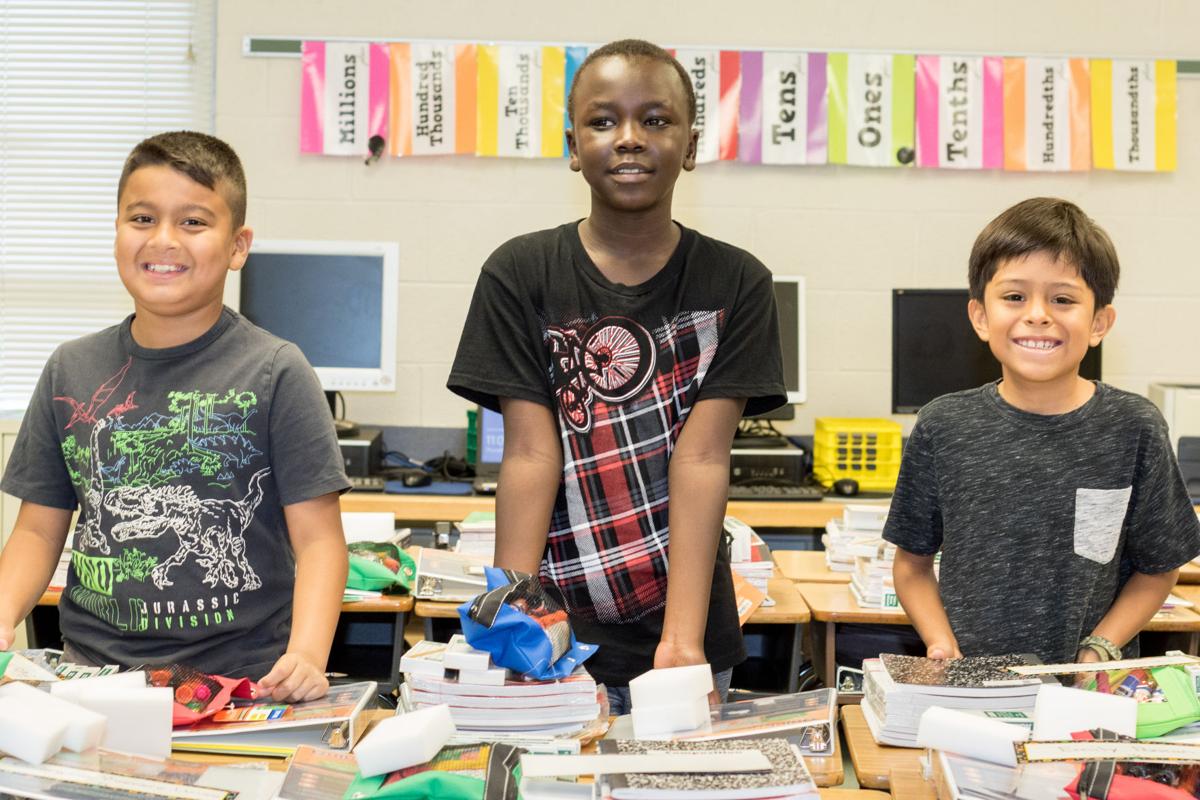 Minnieville Elementary School students get a first glimpse Aug. 24 at school supplies provided at no cost to students and families this year. Pictured, from left, are students Daniel Hernandez, Tuku Sokiri and Brandon Giron. 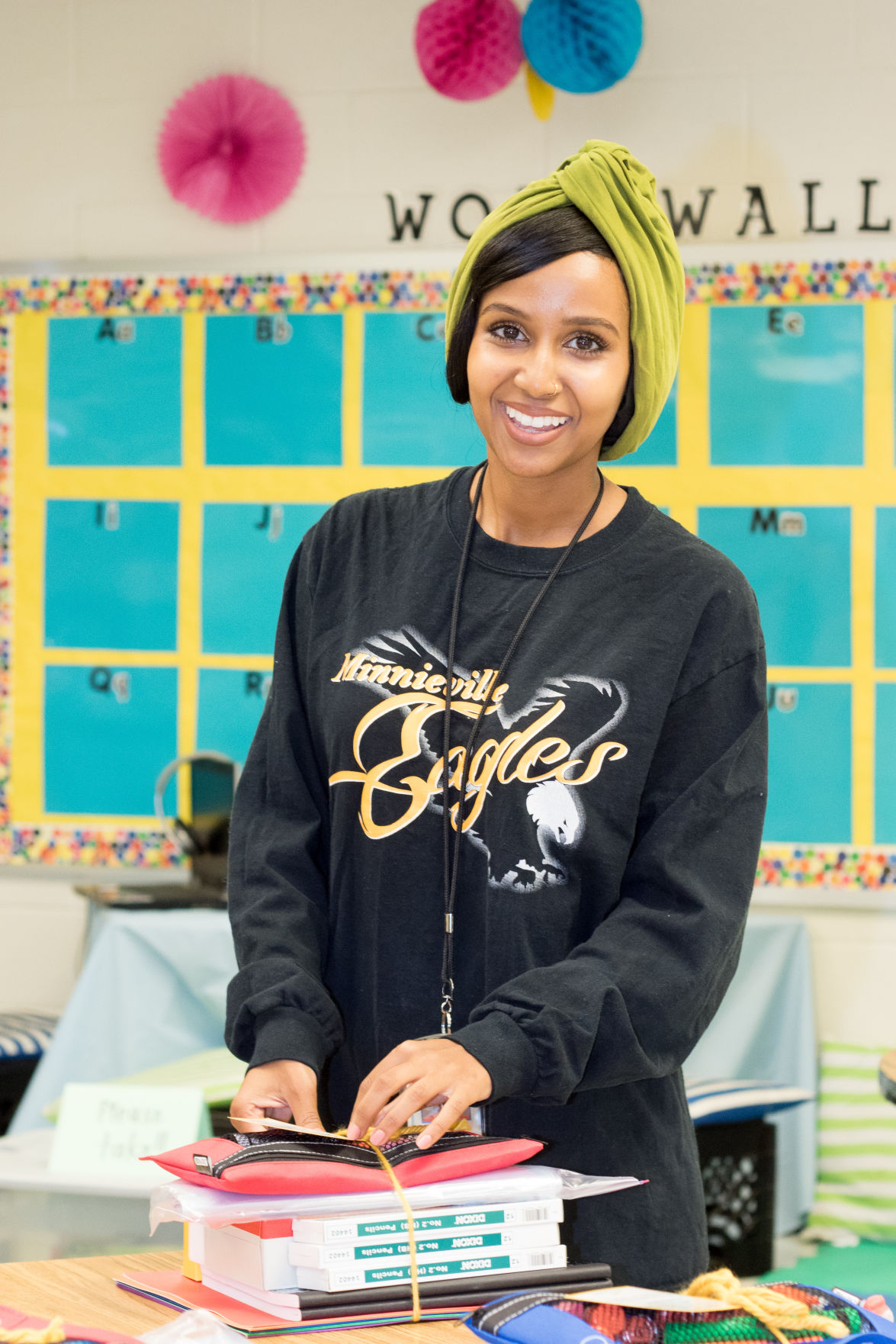 Second grade teacher Fatima Mohammed is happy to have supplies for all students in her class. 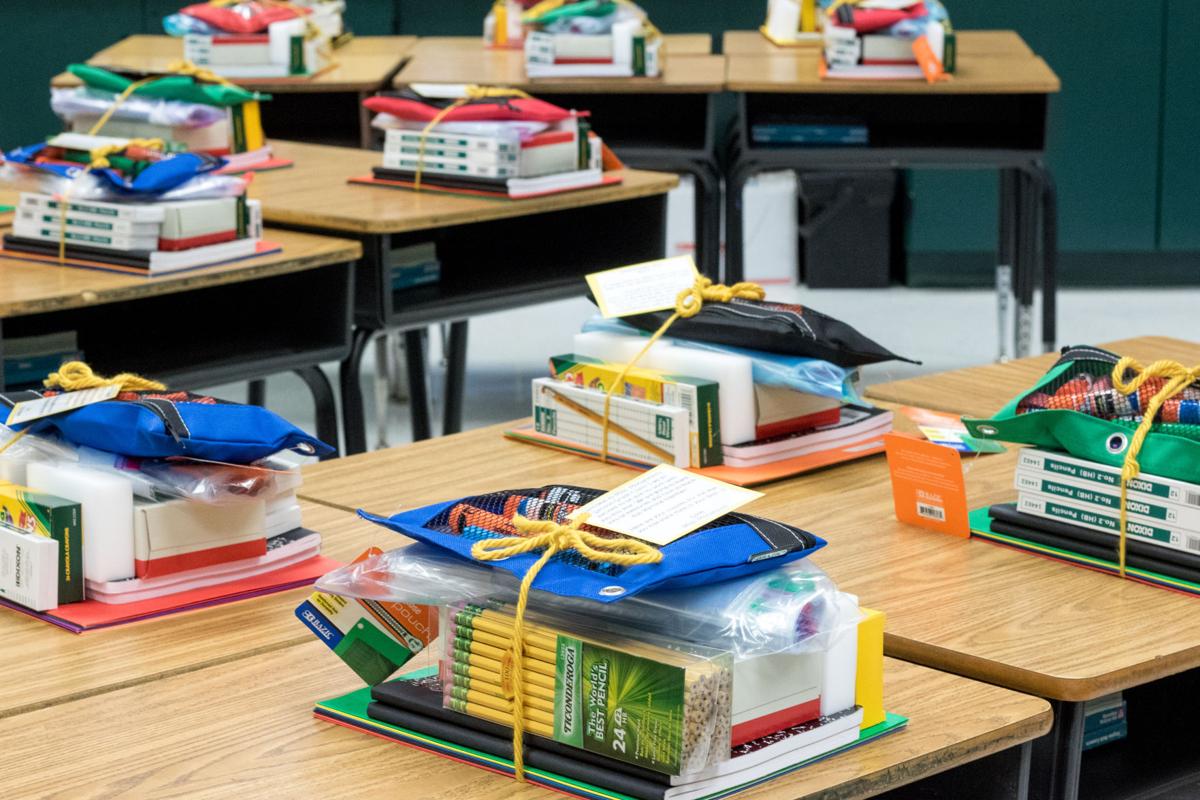 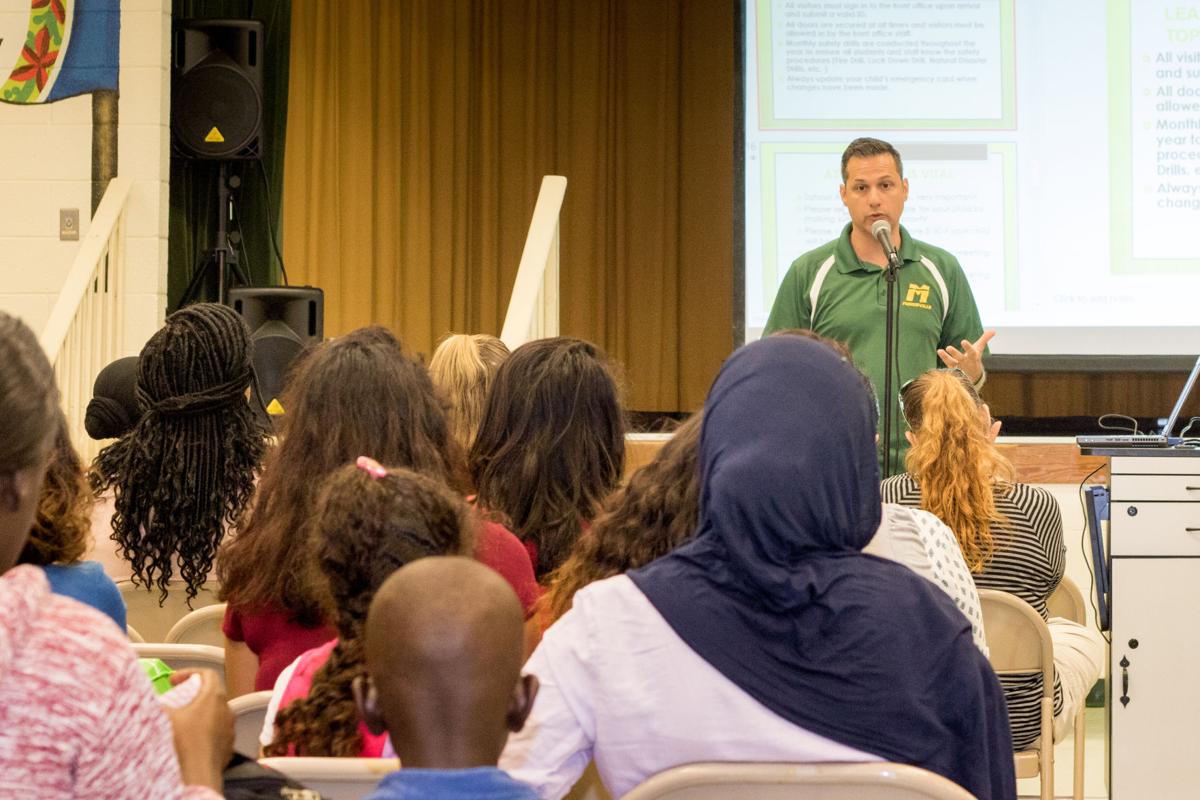 Minnieville Elementary School students get a first glimpse Aug. 24 at school supplies provided at no cost to students and families this year. Pictured, from left, are students Daniel Hernandez, Tuku Sokiri and Brandon Giron.

Second grade teacher Fatima Mohammed is happy to have supplies for all students in her class.

The calendar said August, but it felt more like Christmas, Hanukkah or Ramadan at Minnieville Elementary School last week, where students arrived for orientation to find new folders, binders, notebooks, crayons, pencils and paper waiting for them in bundles atop each desk.

Second-grade teacher Fatima Mohammed tied her students’ bundles with ribbon and attached a note welcoming them to her classroom. The packages contained everything her students need to start the new school year.

Mohammed, who is beginning her third year at Minnievillle, said the free supplies would alleviate students’ stress about not having enough supplies for themselves or their friends.

“Also, for me, now I know exactly what I have and I can figure out how to manage it so kids are always prepared,” she added. “Now I don’t have to worry about anything … because it’s all here.”

For the first time ever, Minnieville Elementary, located in Dale City, provided each of their students with school supplies at no cost. The effort is expected to make things easier for everyone, including students, parents and their teachers, said Principal Nathaniel Provencio, who came up with the idea while shopping for supplies for his own children last summer.

Provencio said the school had always tried to keep their annual supply list reasonable so parents would not have to spend too much. Still, families sometimes struggle to buy everything, something he was reminded of while chatting with a woman in the checkout line. She said her family was having a hard time affording everything her kids needed for the new year.

When he asked where her children went to school, his heart sank. She said Minnieville Elementary. His school.

It was not also not uncommon, he added, for some students to show up empty-handed while others had everything they needed and more. It made things uncomfortable for kids whose families just couldn’t afford to buy the supplies. More than 70 percent of Minnieville Elementary’s students qualify for free or reduced lunches and about 50 percent speak English as a second language.

This year, parents were asked only to provide their child’s backpack. The news was met with relief and sometimes tears, Provencio said.

“We just wanted to make sure that when our students come in, they won’t have to worry about who has this, or who doesn’t have that,” Provencio said. “This way, they’re all on the same playing field.”

For teachers like Mohammed and Andrea Ramirez, who teaches fourth grade, pre-purchasing supplies allows them to better plan for their lessons.

For second-graders, “Magic Erasers,” which enable students to solve math problems on individual white boards or even their desktops, are especially helpful, Muhammed said.

For fourth-grade students who are learning how to organize their schoolwork in preparation for middle and high school, binders and binder dividers are important. But parents sometimes did not understand what the binders were for or where to buy them, Ramirez said.

“Now we’ll know they have them,” Ramirez said of the dividers. “And they are one of the most important things we want them to have.”

Purchasing school supplies for all 510 of Minnieville Elementary’s students was also economical. The school managed to spend only about $5,000, or roughly $10 a child, by buying in bulk through the school division’s suppliers, Provencio said.

The school’s Parent-Teacher Organization paid for the supplies by selling spirit wear and organizing family fund-raising events throughout the year. The group was excited about using their annual proceeds to buy the supplies, said PTO president Gwendolyn Mitchell, even if they didn’t anticipate how much work would be involved to unpack all the boxes and separate hundreds of items for each teacher.

Still, Mitchell said she would recommend the idea to other Prince William County schools and believes the free supplies will help parents better understand the benefits of joining and supporting the PTO.

Like many schools, Minnieville Elementary struggles to attract parent PTO members and volunteers. Mitchell said she agreed to stay on as president this year even though her youngest grandchild, a sixth-grader, has moved on to middle school.

“I think it’s going to help us a lot,” Mitchell said. “I think this will mean a lot for the parents and will really get their attention.”

It appeared to be working last week. Rosa Rosales, who has three school-age children, said the free school supplies are a welcome surprise.

“It’s a big help for people,” said Rosales, who has a fifth-grader, a third-grader and a kindergartner start at Minnieville this week. “Especially for those families who have a lot of kids.”

Students were excited to see the bundles of supplies on their desks. Tuku Sokiri, a third-grader who said he wants to be a scientist, said he thought it was “a great idea.”

“Because now my parents don’t have to go looking for all that stuff in the stores,” Sokiri explained. “Some parents just hate going shopping.”

“We just wanted to make sure that when our students come in, they won’t have to worry about who has this, or who doesn’t have that,” said Principal Nathaniel Provencio. “This way, they’re all on the same playing field.”