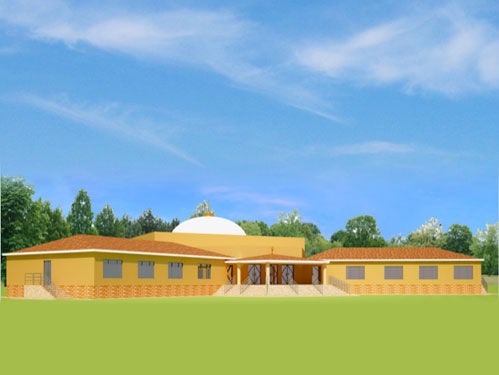 A rendering of the ADAMS mosque in Nokesville. 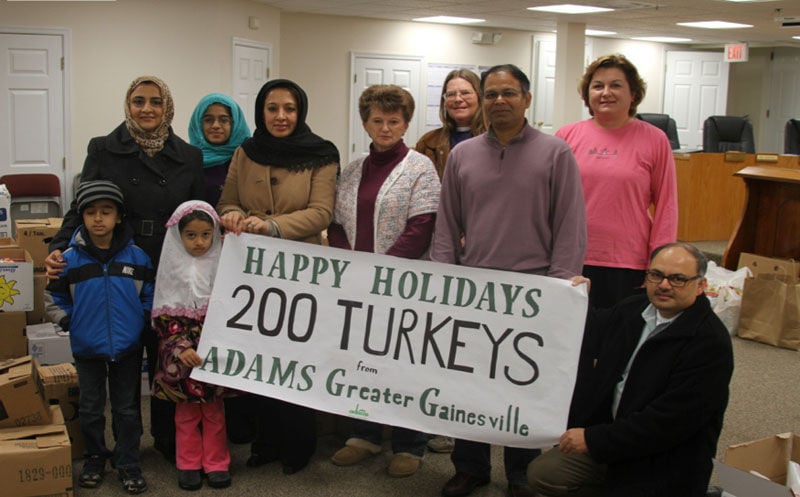 Dr. Syed Murtaza, far right, poses with a group of Gainesville ADAMS members to celebrate a donation to the Haymarket food pantry.

A rendering of the ADAMS mosque in Nokesville.

Dr. Syed Murtaza, far right, poses with a group of Gainesville ADAMS members to celebrate a donation to the Haymarket food pantry.

For an estimated 200 Muslims living in and around Gainesville and Bristow, the mosque recently approved by the Prince William Board of Supervisors will offer a permanent place close to home to worship, gather for social events and teach their children about Islam.

Dr. Syed Murtaza, a board member for the All Dulles Area Muslim Society’s Gainesville branch, said the board’s June 27 vote to approve a special-use permit for their future mosque with a connection to the public sewer line left him feeling hopeful about the group’s future in western Prince William County.

“It’s certainly encouraging for us as a Muslim community. We feel very much included in the community and treated fairly,” he said.

Two supervisors have since asked for a review of portion of the board's vote that granted the mosque permission to connect to the public sewer line. But unless there is a formal motion to reconsider the matter at the supervisors' upcoming July 11 meeting, the June 27 vote will stand.

Congregants belonging to ADAMS-Gainesville branch currently meet for Friday Jummah prayers in area hotel conference rooms and hold Sunday school Quran classes for youngsters at a local public school. The lack of a regular meeting place for the Friday prayer services, the main gathering of the week for Muslims, has been an ongoing challenge, Murtaza and other members of the ADAMS community told the county board.

But all that will change in a year or two, which is when ADAMS Gainesville hopes to complete the first phase of construction on the 22,000-square-foot facility planned for a 14-acre lot on Vint Hill Road between Kettle Run Road and Schaeffer Lane.

Murtaza said the community hopes to have the building completed as soon as possible but acknowledged the sometimes-lengthy process to obtain building permits and complete site work. Fundraising will also take time. Because paying interest on loans is contrary to the Muslim faith, communities generally try to raise money for mosque projects upfront, Murtaza said.

“We wish we will have Ramadan prayers there next year, but that may be optimistic,” Murtaza said.

ADAMS is planning a mosque with two wings and a center hallway. Building will likely be completed in phases, the first of which will be a 10-classroom Sunday school building with a hall to accommodate 150 to 200 people. The entire project to be finished in five to eight years, Murtaza said.

Because the Nokesville site is mostly residential, ADAMS doesn’t expect it will attract a large workday crowd on Friday afternoons like some Northern Virginia mosques do.

At the same time, Murtaza said he expects the mosque membership to gradually grow over time.

“Now that it’s a permanent place of worship, it will grow but it will grow gradually over the next five to 10 years,” Murtaza said.

The board’s decision to allow the mosque to connect to the public sewer line was the most contentious aspect of the supervisors’ public hearing.

Nearly 1,000 people attended the meeting and more than 175 spoke for or against the application for a special-use permit, which is required for religious facilities in areas zoned “A-1” or agricultural. The mosque site is located in the county’s protected “rural crescent,” where connections to the public sewer line are generally prohibited.

The supervisors have made exceptions for both schools and religious facilities, however, most recently in 2013, when the board approved a special-use permit with a sewer connection for Victory’s Crossing Church. The congregation purchased about 18 acres near the intersection of Vint Hill and Kettle Run roads in 2011 and hopes to build a church there in the next few years, according to the church website.

The Victory’s Crossing permit proved critical to the supervisors’ vote on the mosque. Prior to taking a series of votes during which the ADAMS sewer connection was approved, Board Chairman Corey Stewart, R-At Large, confirmed with county attorney Curt Spear that the board approved a sewer connection for Victory’s Crossing in a resolution that noted that septic systems are “ill-suited” for large facilities such as churches.

Stewart said approving a sewer connection for a Christian church but denying it for a mosque would open the county to a lawsuit under the federal Religious Land Use and Institutionalized Persons Act of 2000. Culpeper County was recently sued on similar grounds before reaching a settlement in April to allow a pump-and-haul septic system for a mosque planned for a site outside the town of Culpeper.

Murtaza said ADAMS has not yet conducted a soil test on their site to confirm a septic system would not work. But he said it’s “common knowledge” that the hard, clay soil in the area is generally not conducive to septic systems, which filter waste through a system of underground pipes before releasing it into the ground. The ground must absorb water at a certain rate for the systems to work.

“We did not feel we needed to spend so much time or money on that,” Murtaza said of soil testing. “We have already exhausted our resources with this very long SUP.”

The mosque will be the fourth ADAMS-affiliated Muslim community center in Northern Virginia. ADAMS also has mosques in Sterling, Fairfax and Chantilly. The organization has 10 different branches in the region, but most don’t have their own buildings. They make do with smaller rented spaces or share worship spaces with other faiths. One ADAMS group worships in a Jewish synagogue, Murtaza said.

Murtaza, a psychiatrist who lives in Haymarket, said members believe the congregation’s young people will most benefit from the new Nokesville mosque.

Murtaza called the three years of negotiations with county officials and the June 27 public hearing “the easy part” of building the new mosque.

More difficult, he said, will be overcoming differences with their new neighbors and letting them know the mosque will be open for community use and all are welcome.

As an example of ADAMS’ community work, Murtaza noted ADAMS’ Chantilly mosque offers a clinic where members with medical training serve the uninsured. He said they hope to bring such services to the Nokesville periodically to serve the surrounding community.

“There are more things we have in common than not,” Murtaza said. “We really want to work to find common ground and to be good neighbors.”

Two supervisors ask for a review of mosque vote

UPDATED: After a series of votes taken after 3 a.m., the Prince William County Board of Supe…

Religious freedom is a constitutional protection that I value for all Americans.

We would like to present some objective information about this “septic versus sewer” issue at the heart of this ADAMS application.

The move was prompted by the Prince William board chairman's actions June 28 to usher through a special-use permit for a new mosque planned for Nokesville.