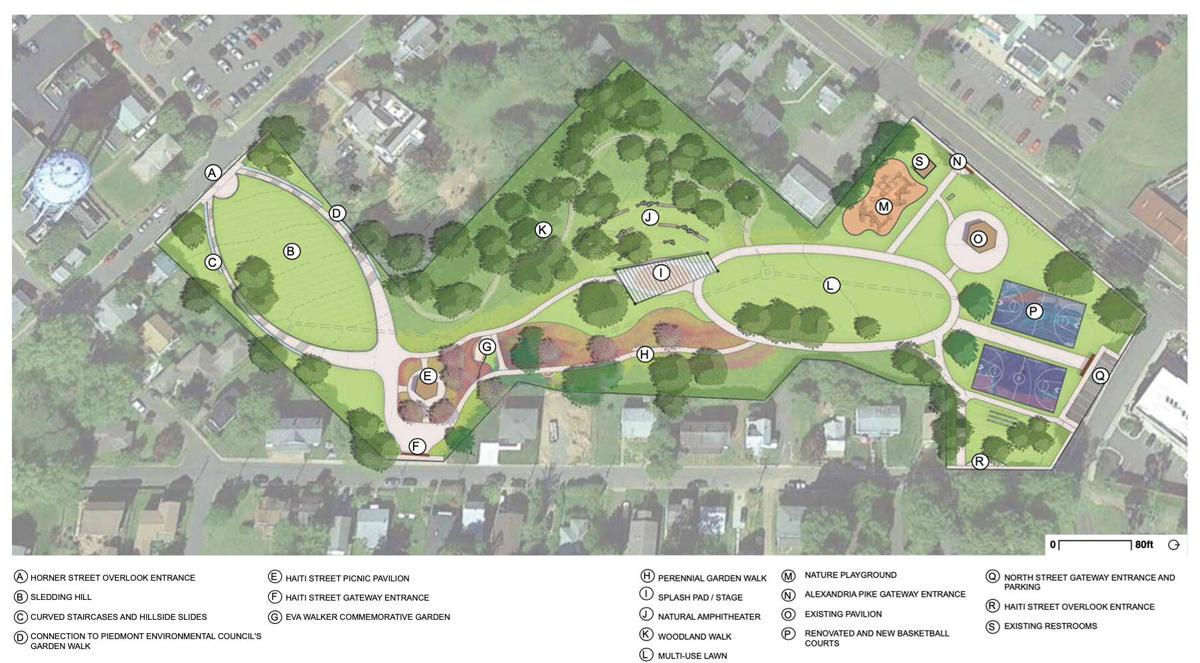 This drawing illustrates the suggested features that could be added to Eva Walker Park. 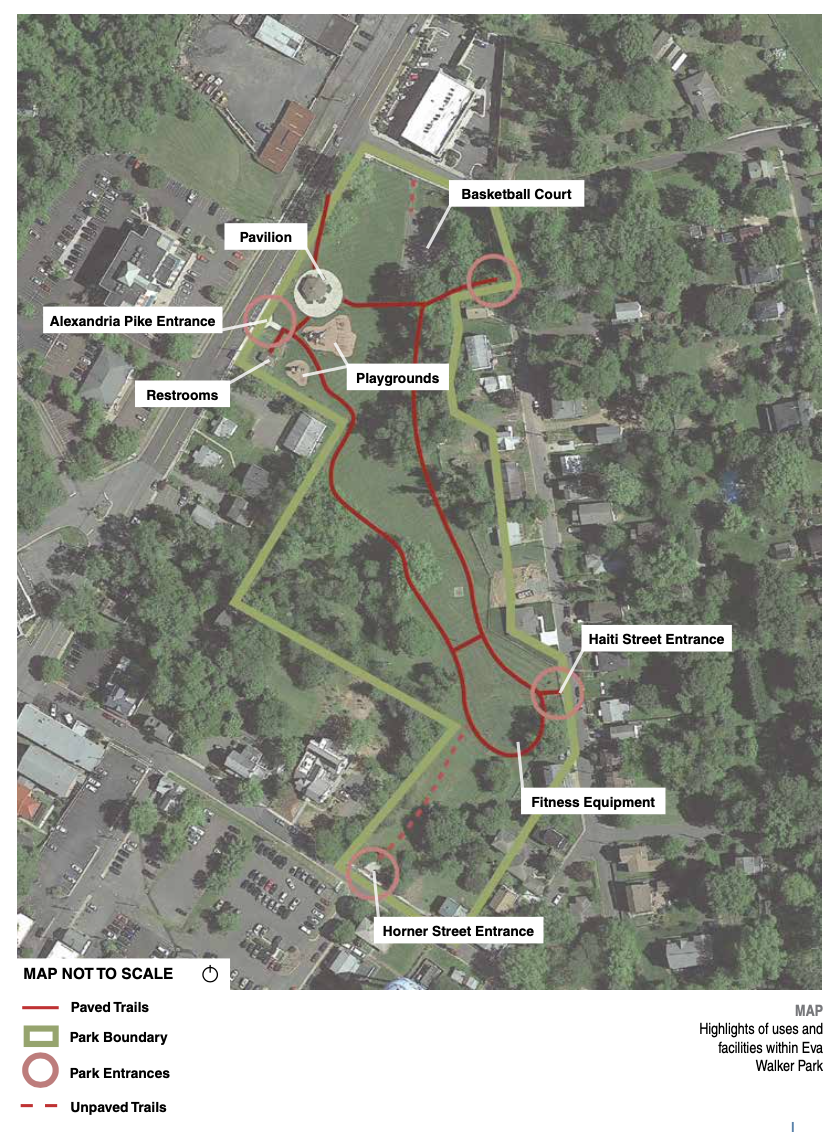 UPDATE: The Warrenton Town Council voted unanimously to approve the master plan for Eva Walker Park. Currently there is no funding set aside to complete the project, but grants and other funding opportunities may be pursued, now that a plan is in place.

ORIGINAL ARTICLE: The Town of Warrenton Planning Commission voted unanimously Jan. 19 to send the final draft of the Eva Walker Park Master Plan on to the Town Council; council members will consider the proposal at their Feb. 9 meeting. The design plan – paid for by the PATH Foundation and completed by Rhodeside Harwell, Inc. a landscape architecture, planning and urban design firm -- is a roadmap of possibilities for the 5.6-acre park in the middle of town.

At this point, no town funding has been allocated to implement the plan; whether taxpayer money should be used to make the proposal come to fruition is ultimately the decision of the Warrenton Town Council.

On Tuesday, planning commissioners were impressed with the design, but some were concerned about the cost. Although there are no solid estimates for the renovations, Denise Harris, the town’s planning manager, said the bare-bones version of the renovated park would cost somewhere around $5 million, while the price tag for the fully built out plan would be closer to $11 million.

The only part of the plan that already has dollars set aside to complete is the Eva Walker Park Commemorative Garden, funded by an AARP Community Challenge Grant. The design calls for curved benches and a series of interpretive panels, with native and flowering plantings. The garden is intended to honor Eva Walker's life and legacy (see accompanying box).

The selected concept for the panels and plantings, called “Parade,” was inspired by the parades that Walker led in the Haiti community as well as her background in dance and modeling. The concept incorporates personal memories of Eva Walker and her legacy.

Other key elements of the park design include a second basketball court; five entrances to the park (two on Haiti Street, one on Horner Street, one on North Street and one on Alexandria Pike); two new parking areas; a natural amphitheater; improved walking trails and a multi-use pavilion.

During a discussion about whether to move the master plan on to the town council, commissioner Ali Zarabi said, “I am delighted to honor the dedication and legacy of Mrs. Walker. Where I do differ a little and maybe I’m projecting, but I think both Commissioner [James] Lawrence and I probably had to take a hard breath when we were talking about the numbers, and the cost of a project like this… I would be remiss if I did not think that we could honor Mrs. Walker, in addition to some improvements to Eva Walker Park, by tending to an Oliver City community that has been living with malfunctioning storm runoff and sewer issues for decades and decades, and yet we are talking about this kind of money on the beautification of a park.

“I don’t know how Mrs. Walker would feel about that, to be honest with you, but I think that part of a living legacy is improving the condition of life for people that were her own, and her community.”

Stormwater and drainage issues have plagued Oliver City, a traditionally African American neighborhood on the east side of town, for years.

Planning commissioner Gerald Johnston agreed with Zarabi. He said, “The priorities of the park should be definitely looked into… but some of that money could be used where he thinks it should go… I commend him for saying that.”

Harris explained that if the master plan for Eva Walker Park were to be approved by the town council, it would be added to the town capital improvement plan and evaluated during the budget process for possible funding. She added that grants might be available to help with the cost.

Reservations about funding aside, all commissioners voted to forward the master plan and park design to the town council for consideration. The final version of the plan may be seen at https://warrenton.novusagenda.com/agendapublic/CoverSheet.aspx?ItemID=3487&MeetingID=1592, under attachments.

If the Warrenton Town Council approves the design plan for Eva Walker Park and adds it to the CIP, the project could be tackled with a phased approach.

Phase 1: Conduct cost estimations and construction drawings for the total master plan concept to determine the relative costs of each proposed element and to understand the comprehensive infrastructure impacts. This phase will also include costs related to necessary site drainage improvements and soil mitigation.

Phase 3: Construct the Haiti Street gateway entrance and picnic pavilion to improve ADA accessibility from the park's south end and to provide the Haiti community with a formal gathering space.

Phase 4: Construct all of the remaining park elements north of the Haiti Street gateway entrance, including the remainder of the Eva Walker Commemorative Garden. This would allow for most trails, landscaping and utility infrastructure to be built all at once to ensure visual cohesion and to limit intermittent construction disruptions within the park's inner portions.

Phase 5: Construct the Horner Street overlook entrance and all of the remaining park elements south of the Haiti Street gateway entrance. This would allow for the sledding hill, curved staircases, hillside slides, and connection to the Piedmont Environmental Council's Garden Walk to be built all at once to ensure visual cohesion of the hillside elements and to limit intermittent construction disruptions at the park's main entrance from downtown.

The history of Eva Walker Park

Eva Walker emerged as a prominent civic leader and outspoken civil rights activist in the 1960s and 1970s. As part of an effort to improve the Haiti community’s public infrastructure, safety and quality of life, she spearheaded the effort to convert the site into a park. This campaign to improve one of Fauquier County’s historically segregated African American communities was consistent with Eva Walker's commitment to the civil rights movement, as well as to Haiti’s children and families.

In the early 1980s, the site where Eva Walker Park is now was a privately owned field called "Horner's Field;" Eva Walker convinced Dr. Aaron Gerber to donate the site to the town. Originally called “Alexandria Park,” the park was renamed “Eva J. Walker Memorial Park” following Eva Walker’s sudden death in 1982, at the age of 48.