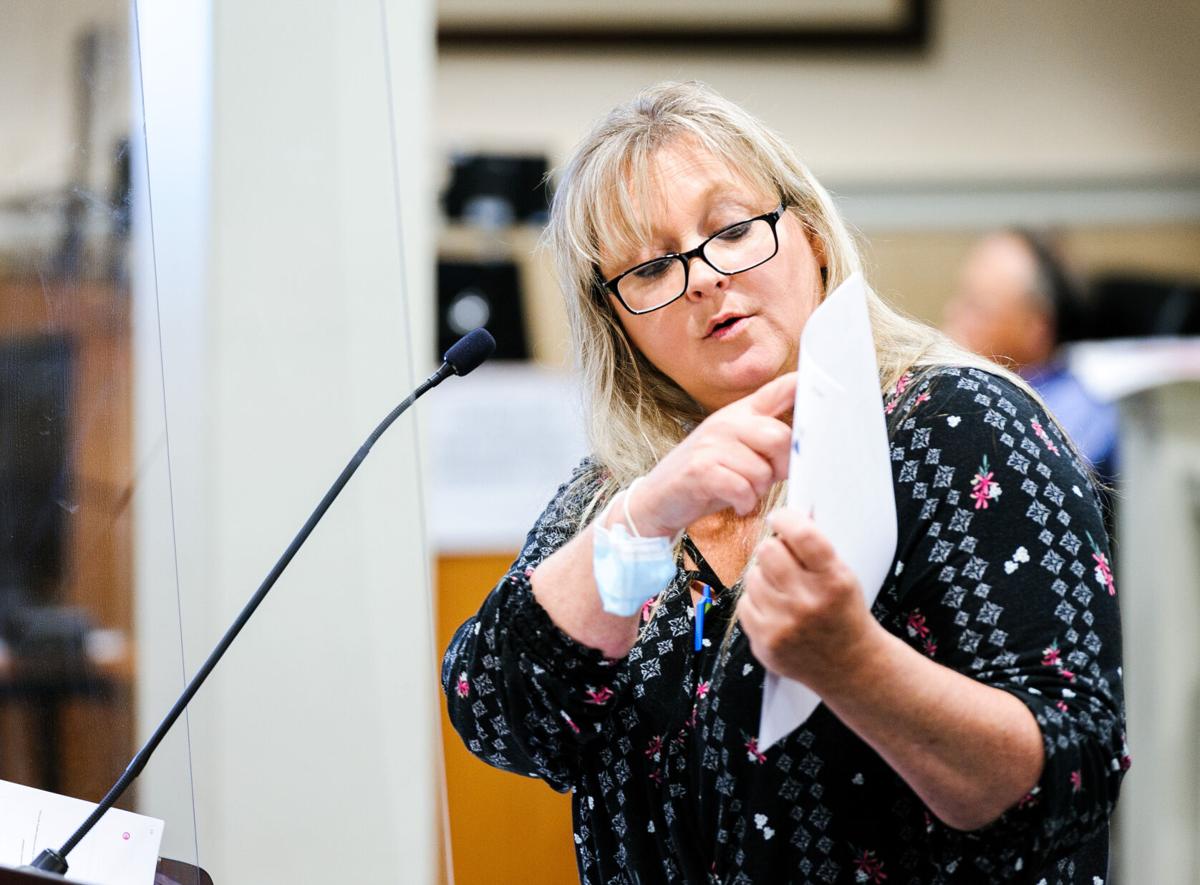 Angela Jrab, owner of The Puppy Shop in New Baltimore, demonstrates one of the documents she is required to have at her business for each animal. 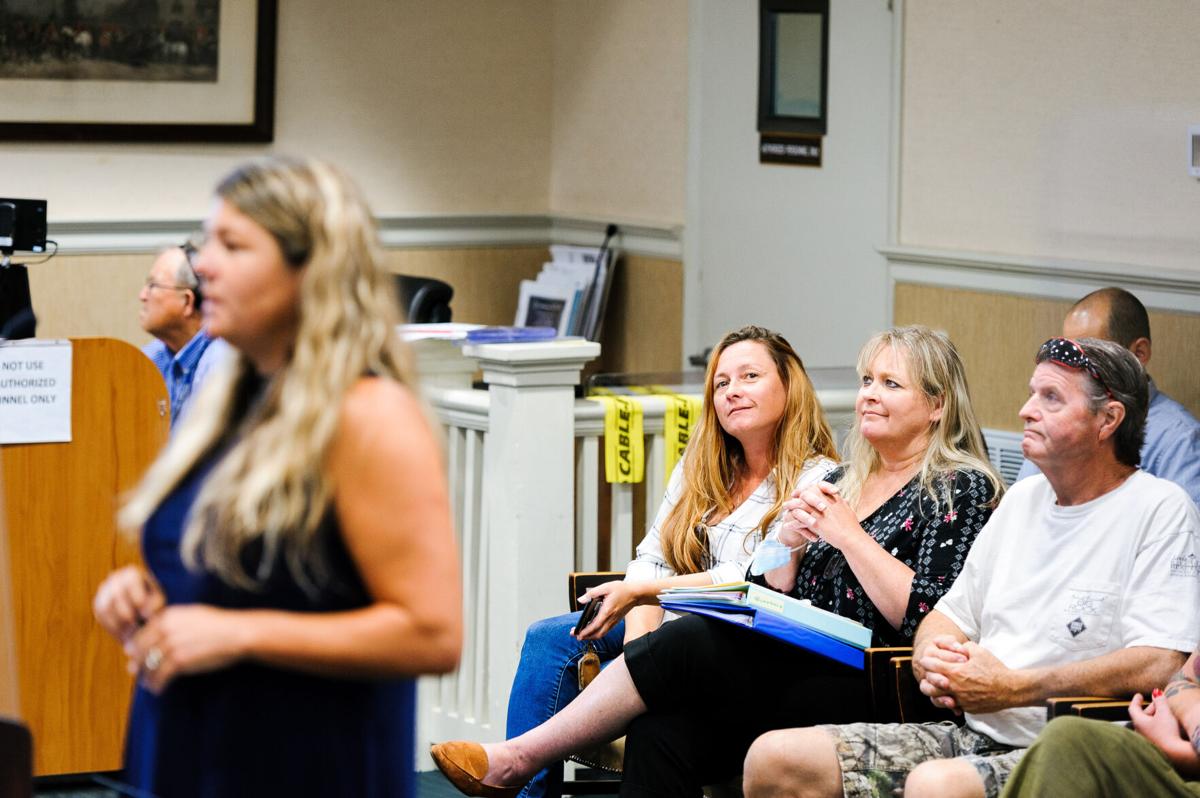 Angela Jrab (seated, in black shirt) looks on as Fauquier SPCA Executive Director Devon Settle (in foreground) speaks at a June 3 meeting of the Fauquier County Board of Zoning Appeals. 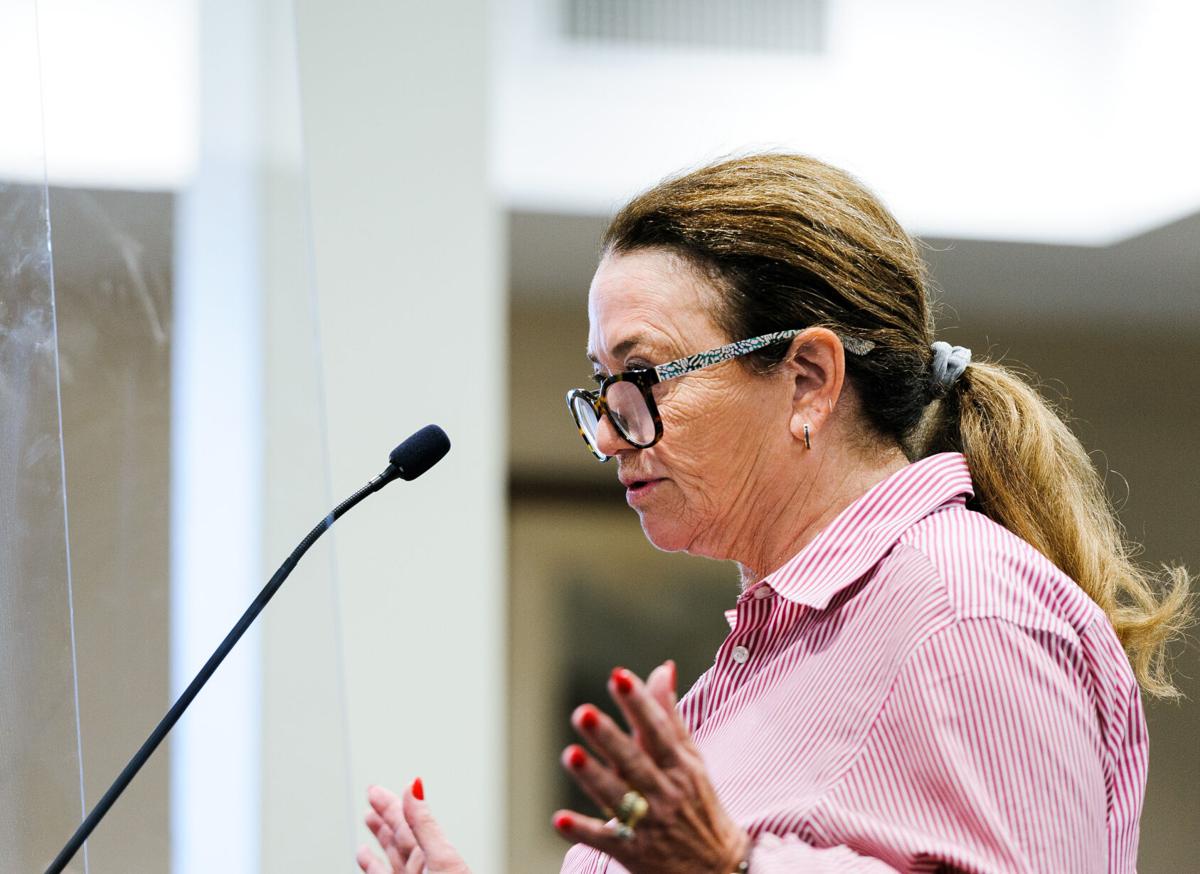 Middleburg Humane Foundation board member Polly Gault speaks in opposition to The Puppy Shop's application for a special zoning permit during a June 3 board meeting. 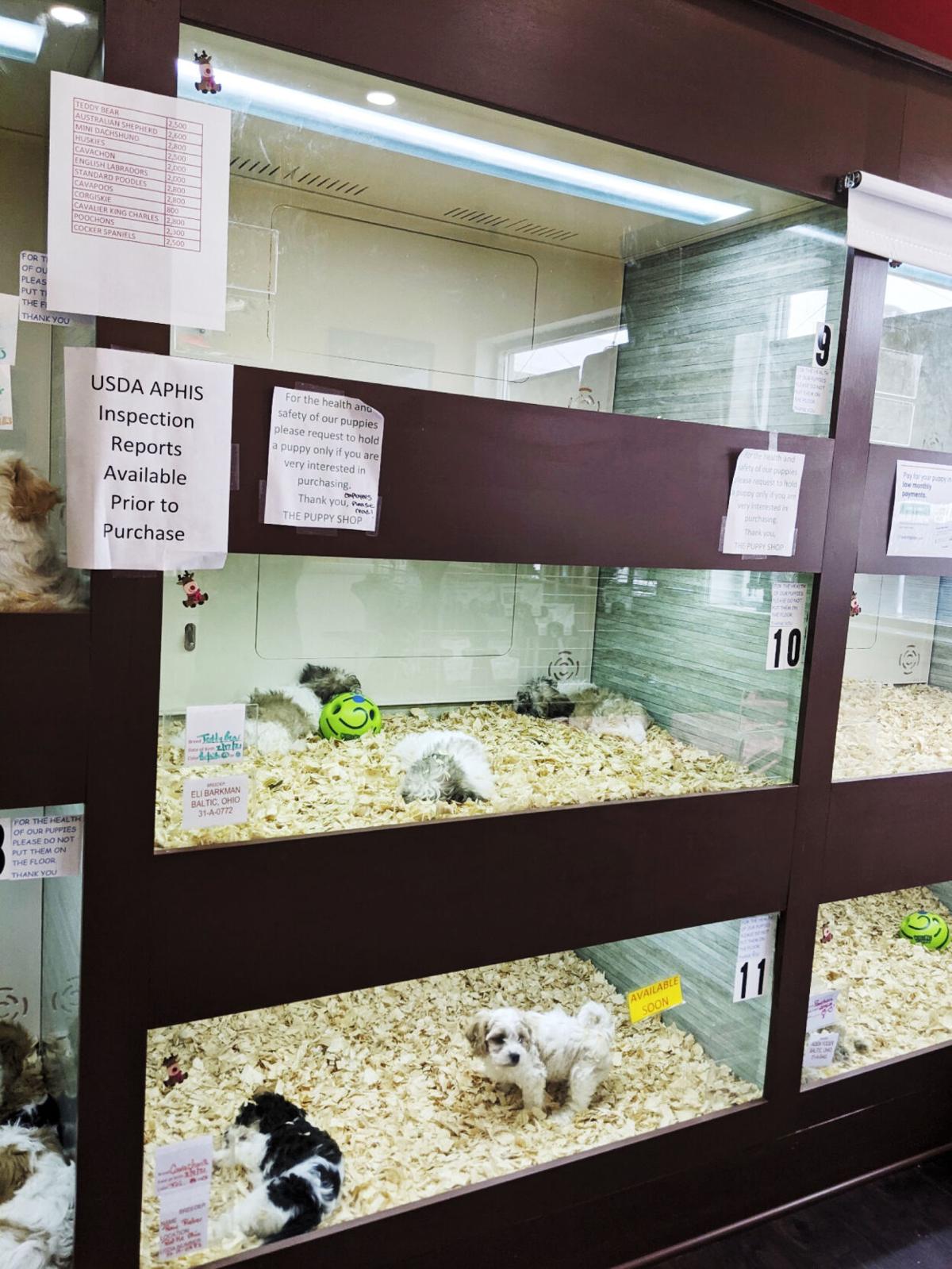 Puppies for sale at The Puppy Shop are contained in glass and Acrylonitrile Butadiene Styrene (ABS) plastic enclosures, according to the Fauquier County Department of Community Development. Each enclosure is equipped with LED lighting, air filters, doors, food bowls and water bottle holders. 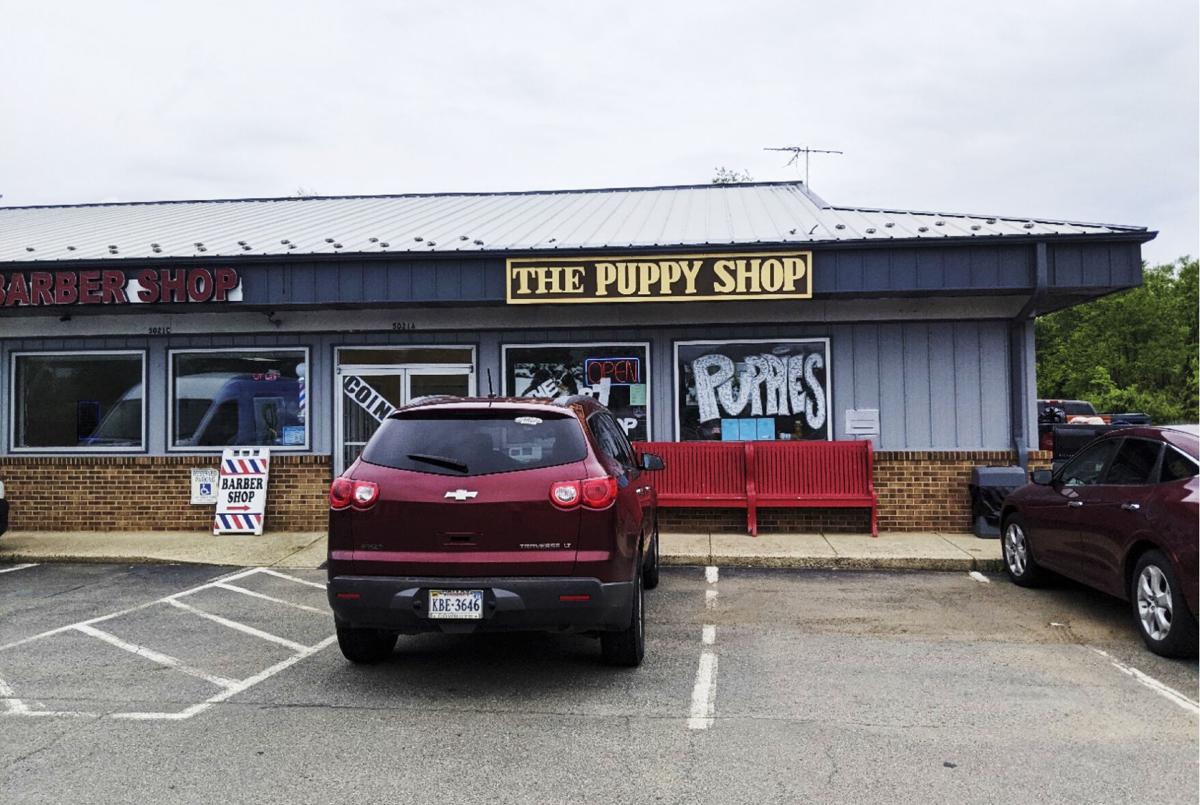 The Puppy Shop is located at 5021-A Lee Highway in New Baltimore.

The Fauquier County Board of Zoning Appeals voted unanimously Thursday to deny a New Baltimore puppy retailer’s request to renew the special permit that allows the business to operate in Fauquier County. The Puppy Shop’s permit expires Aug. 6.

The board received more than 130 written public comments before the meeting opposing the application, most citing opposition to puppy retailers in general. This type of business is allowed under Virginia law, however, and may operate in commercial districts of Fauquier County with a special permit granted by the zoning board.

Board Chairman John Meadows (Lee District) emphasized before Thursday’s meeting that the board could only consider a narrow slate of zoning-related matters in considering the application. “All the board members are animal lovers,” said Meadows, explaining the board couldn’t address the many accusations in the public comments that dog retailers in general rely on so-called “puppy mills” where dogs are bred in inhumane conditions.

Ultimately, the resolution to not renew the permit cited the applicant’s failure to abide by the conditions of the one-year special permit granted by the board last August. The shop, owned by Gainesville resident Angela Jrab, has been cited four times by the county for zoning and building permit violations since it opened in December. The resolution states that, based on the previous violations, Jrab is unlikely to comply with conditions set by the board in the future.

Jrab spoke in defense of her actions Thursday, addressing each zoning and building citation and emphasizing she was in good standing with the Fauquier County Sheriff’s Office Division of Animal Control, which granted her a dealer’s license in December. “You’ll have people trash me to no end,” she told the board. “I’m not hiding anything. … I have no violations from animal control,” she said. “Animal control doesn’t have a problem with us and I don’t know how else I can prove myself.”

Most recently, The Puppy Shop was cited May 21 for having 31 puppies in the store, which the county zoning office found to be a violation of the business’ special permit. The permit allows for up to 24 puppies for sale at any one time and stipulates “There shall be no breeding, grooming, training or boarding of dogs on the property.”

Jrab argued the seven additional dogs were not for sale and therefore did not violate the terms of the permit, claiming the puppies had just arrived from a breeder and were being quarantined. When pressed by Meadows -- “But [the puppies] were there.” – Jrab responded: “They were there. They were not for sale. They were quarantined.” She added at another point: “We had 31 puppies we intended to sell, but not all were for sale.” 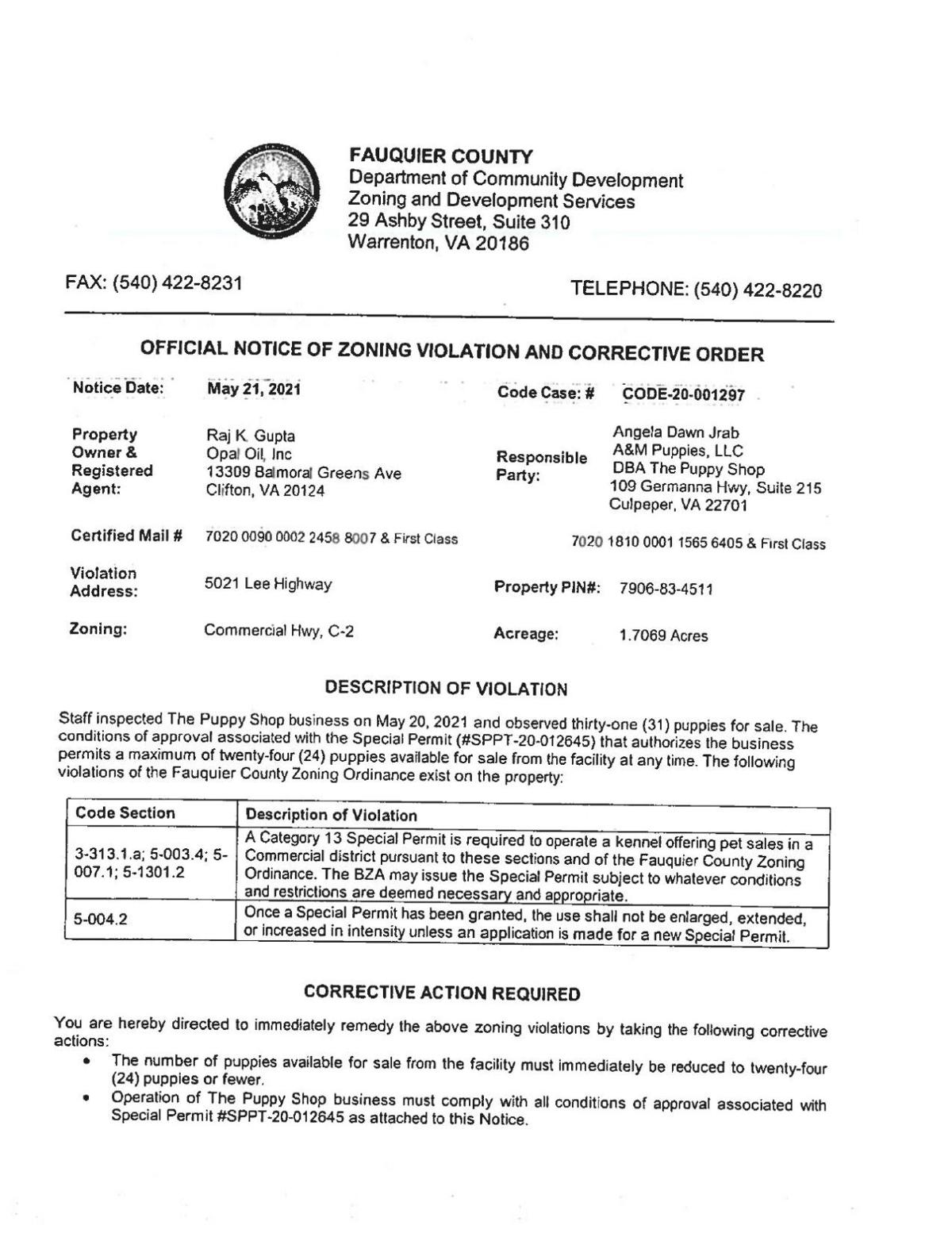 Addressing two zoning citations for unpermitted signs near the store, Jrab argued the zoning department did not hold other nearby businesses to the same standard – businesses that, she claimed, were also violating county sign ordinances.

“Unpermitted and impermissible signs were erected multiple times after notification in writing was provided to the business owner,” says the community development department staff report submitted to the board ahead of the meeting. Verbal and written warnings were issued to Jrab on several occasions, the report notes. Formal notices of violation were issued to Jrab on April 15 and May 3.

Jrab also responded to a stop-work order issued against her business in August 2020, just a week after her initial Fauquier County special permit was approved. The citation claimed work that required a building permit had been performed without one. “It wasn’t like we built out anything,” Jrab said. “We had actually removed what had been there for the cleaners.” (A dry cleaning business operated in the storefront previously.) 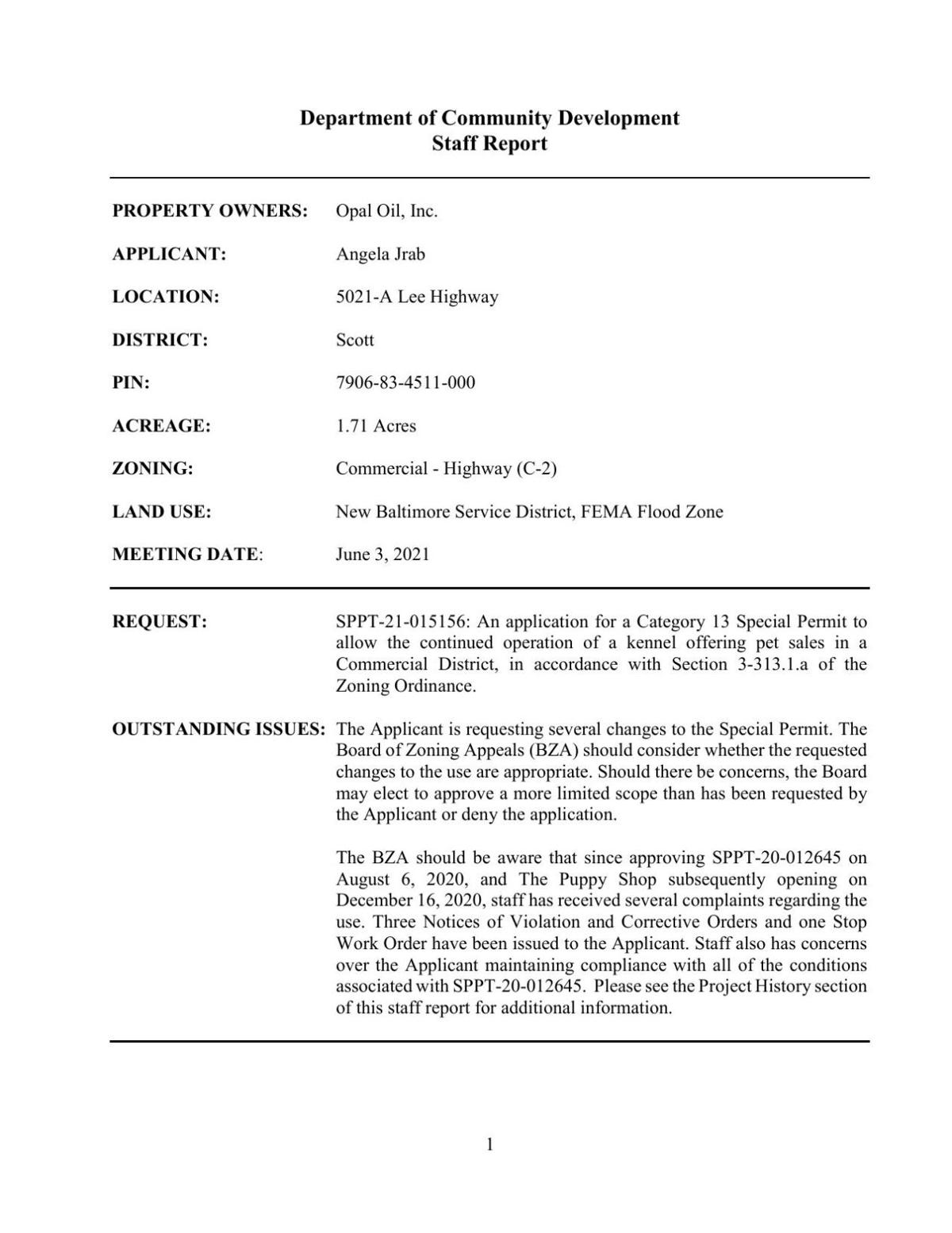 Jrab said the work had started in April 2020 – she signed a lease for the space in March 2020 – but that most of the work entailed tearing out decades-worth of old equipment and involved little actual construction.

She also defended her business against the public comments accusing her of sourcing dogs from puppy mills, detailing each document -- like health certificates and documentation of the puppies’ origin -- she must have for each puppy in the store. She refuses to procure puppies that don’t have a health certificate as legally required, she said. “Animal control can come in any time,” she again emphasized. “They have never written us up for anything.” All of the breeders who supply puppies to the shop do not have USDA violations on record, she said, as required by law.

In addition to the dozens of written comments submitted before the meeting, ten people spoke at the public hearing before the vote Thursday. Like those submitting written comments, all were opposed to renewing the special permit.

Polly Gault, representing the Middleburg Humane Foundation, chronicled to the board the foundation’s years-long efforts to obtain a special permit for its 23-acre animal shelter in Marshall. The facility is allowed to house up to 30 animals at once. “We’re not a storefront in a strip mall,” Gault said.

Addressing The Puppy’s Shop May 21 citation, she added: “We have a whole separate wing for quarantine … and [the quarantined dogs] go toward our animal count” stipulated in the foundation’s special permit.

“It took us years … to get the zoning and permitting for our new facility,” Gault said, emphasizing county staff worked with the foundation to ensure the facility would be a safe place for the animals. “We ask today that you require the same type of requirements for everybody.”

Angie Roeder, the executive director of Washington Area Animal Adoption Group based in Delaplane, argued in a similar vein. The organization’s facility has moved several times, each time requiring a new special permit, she explained. “Each time we get our permit, we follow the rules,” she said, arguing entities that violate the terms of a permit shouldn’t be granted a renewal.

After a lengthy closed session to discuss the legal implications of the issue, board members returned to open session and -- without further discussion -- unanimously approved the resolution to deny Jrab’s request to operate in Fauquier County past Aug. 6.

Jrab did not immediately respond to a request for comment after the meeting.

In response to the uproar surrounding a New Baltimore puppy retailer, Fauquier County supervisors will move to eliminate the allowance for sta…

Did Jrab ever actually state where the puppies came from? All pet store animals come from puppy mills or backyard breeders (smaller versions of puppy mills).

Learn something about puppy mills: https://harleysdream.org/what-is-a-puppy-mill/

Sadly, there are several here in Fauquier County and they are not illegal, just inhumane.

This Puppy Store profits from the sale of these sad, neglected and abused animals.

How many homeless animals are killed every year because there are just too many of them?

What can you do about it?

Never breed or buy, visit your local shelter when looking for a pet. Most have a wide variety of breeds (some are even purebreds) and adopt.

Want a specific breed? Go to a breed specific rescue, just google the breed name with rescue behind it, there are thousands.

https://www.petfinder.com is also a great source for homeless animals.

Most importantly, if you do have a pet, make sure it is spayed/neutered. One cat or dog can have many hundreds of offspring over a few years if it is not spayed or neutered. The lives of these feral animals are miserable and end in starvation, by larger animals who eat them, by vehicles on the highway, or by freezing to death.

The Board did the right thing by denying this permit. Let’s keep Fauquier a humane county.