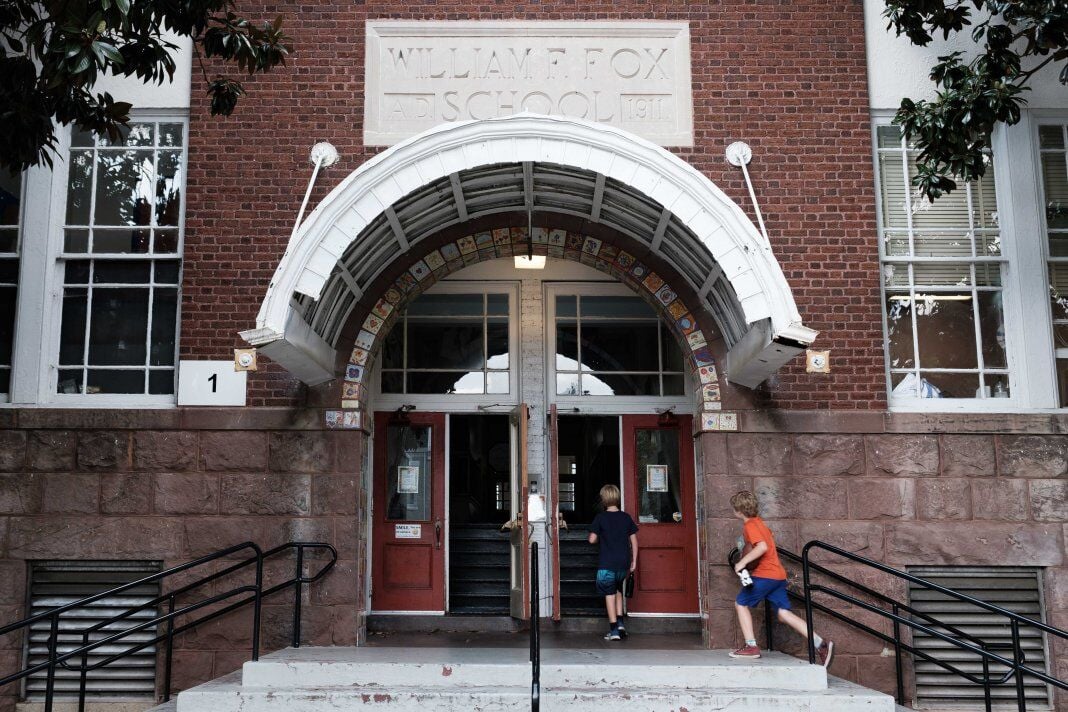 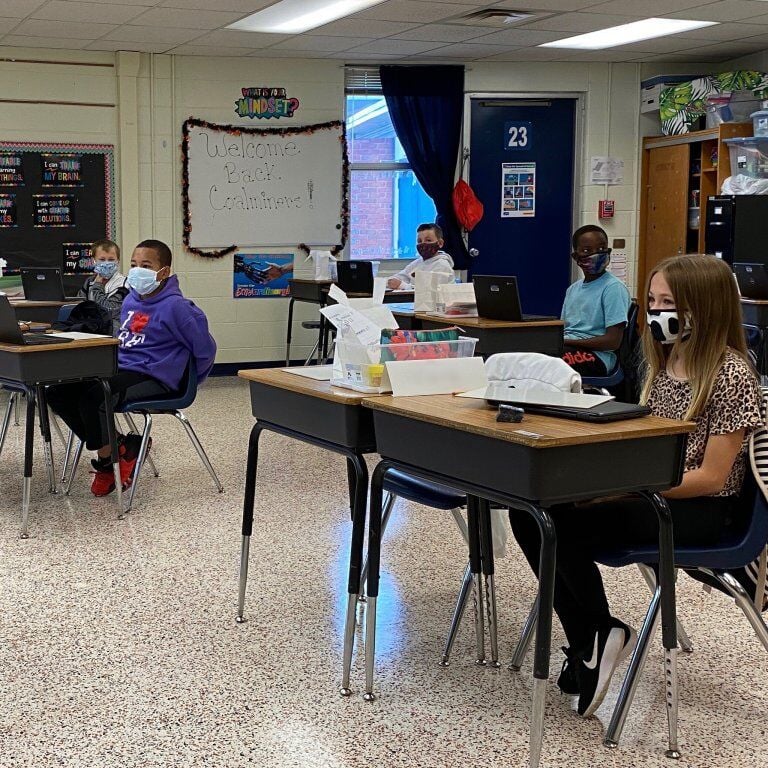 In late September, when Virginia health officials launched a dashboard that detailed outbreaks in K-12 schools across the state, it was applauded as a long-needed step toward more transparency — and a relief for parents hesitant over the prospect of sending their children back to the classroom.

Six months later, the data on reopening has gained even more importance amid a state and nationwide push to return students to the classroom. But there are limits on what it can and can’t tell officials, parents and others looking for answers on the relative risks of in-person school.

As a result, only three of the state’s 132 local school divisions were operating fully remotely as of March 22, according to data from the Virginia Department of Education. Thirty-eight are fully in-person — defined by the agency as providing at least four days of in-person instruction for all students.

According to VDOE, the majority of divisions — 91 in all — define their schedules anywhere from partially in-person to partially hybrid, meaning that some students (“usually the younger grades”) are in person for part of the week while others are still remote. Thirty-four divisions are “all hybrid,” meaning some students are remote and others go in for fewer than four days a week. And some of the state’s largest school divisions, including many in Northern Virginia and in Richmond city, have no plans to bring all students back for five-days-a-week instruction until the fall.

Reopening decisions are still mired in debate. Schools across the Hampton Roads region hesitated to return students to class as cases surged over the holidays. Administrators in Richmond and Fairfax County have argued it’s impossible to phase thousands of students back to the classroom and maintain social distancing requirements in overcrowded school buildings. Since the start of the school year, many administrators have also complained that they’ve been forced to take on the role of public health experts, interpreting a complicated slew of metrics from state and national sources.

Dr. Taison Bell, an infectious disease specialist at the University of Virginia, said the debate will likely extend until children can receive a vaccine — which isn’t expected to happen until at least the early fall. “I don’t really think the conversation will end until that’s achieved,” he said.

In the meantime, the state’s outbreak dashboard is another metric that’s frequently consulted by parents and others looking to glean information about virus transmission risks in schools. And unlike other indicators — such as an “operational strategy” from the Centers for Disease Control and Prevention that includes five different levels of transmission risk based on case rates and test positivity — it’s simple to understand.

The data includes the name of each school, the locality and the number of cases associated with the outbreak (the exact numbers for small case counts aren’t disclosed to preserve anonymity, according to the Virginia Department of Health). The department also lists the “investigation status” for each outbreak — whether it’s in progress, “pending closure” or closed completely.

Based on the data, it’s easy to draw some simple conclusions. As of Friday, six of the 12 schools currently listed with an “outbreak in progress” were private. Five of those six were private, Christian schools. Private schools also appeared to have larger outbreaks than K-12 public schools, whose case numbers — with the exception of Independence High School in Loudoun County — were all small enough that VDH did not include them on the dashboard.

An analysis of every listed outbreak in schools since the start of the pandemic reflects a similar trend. The six largest in the state, in terms of overall numbers, all occurred at private schools. Five were Christian, and two — Fork Union Military Academy and Fishburne Military School — were all-male boarding schools that also admit day students.

Does that mean private schools are more likely to have outbreaks than public ones — or are they struggling more to mitigate the spread? Experts say case numbers leave out vital context. Most private schools, for example, have had markedly different operational strategies from public schools for much of the pandemic. Not only have more been in-person, but they’ve been more completely in-person, while many public schools have staggered schedules to reduce the number of students in the building at any one time. That means trends could shift as more public school students return for in-person instruction.

The state’s dashboard also leaves out information about the overall number of students and faculty relative to the number of cases. That makes a big difference when it comes to assessing the overall burden of disease.

StoneBridge School in Chesapeake, for example, currently tops the dashboard with 59 outbreak-associated cases among students and faculty. But according to its website, the school has a total of 393 students and more than 70 staff — meaning that roughly 12 percent of its overall population was infected.

That’s significant, but lower than other schools on the dashboard with smaller case numbers. Grace Christian School in Hanover had 52 cases, but lists a total of 235 students and employees. At 22 percent, it’s a significantly larger infection rate. Neither school responded to requests for comment.

“What we care about isn’t cases, but case rates,” said Emily Oster, a Brown University economist who’s spent months studying available data on transmission in schools. “One case in a school of 10 people is different than one case in a school of 1,000 people.” She began collecting data on K-12 transmission in late August to address what she saw as a shortage of information on the risks posed by school reopening. One significant question at the time was whether schools could lead to “super-spreader” events — contributing to a rise in cases throughout the community.

“But if you look at all the data — like, for example, a big study that came out of North Carolina — they did really detailed contact tracing and had something like 800 cases in the school population,” Oster said. “Of which 32 were associated with in-school transmission. That kind of ratio suggests that a very large share of the cases we’re seeing are, in fact, not school-transmitted cases.”

Brown’s dashboard tries to incorporate similar context, contrasting case rates in schools with rates in the surrounding communities. The data suggests that case rates over time are generally higher in the community than they are within school buildings (squaring with some administrators in Virginia who say they’ve seen greater numbers of COVID-19 cases among their remote-learning students).

It also indicates that mitigation measures play a strong role in transmission. Consistent mask wearing, for example, tends to significantly reduce case rates among students and particularly staff, who Bell said are at higher risk of contracting and spreading the disease than students.

Experts say that context is important when it comes to decision-making. While the state publicly discloses outbreaks, which it defines as two or more “epidemiologically linked” coronavirus cases among students or staff, local health departments generally won’t discuss them. Multiple districts with large school outbreaks declined to answer even general questions, such as how they started or if there were any similarities in how cases tended to spread.

“I really can’t glean much from the numbers because I don’t have much context for them,” Bell said. But when schools do provide more information on an outbreak, it makes a difference.

Fishburne, for example, was the only school with one of the six largest outbreaks in the state to respond to an interview request from the Mercury. Communications director Chris Richmond said the school’s first outbreak of the school year was confirmed on Jan. 26 — when students returned from winter break just as cases were surging across the state.

“I think it had to do more with the time of year than anything else,” he said. While VDH reports there were a total of 26 infections, the school says that only 15 cadets and one faculty member tested positive when the Central Shenandoah Health District organized a mass screening event on campus.

When the results came back, Richmond said the school transitioned to online classes for two weeks. Students who tested positive were isolated in their own dorm rooms, and Fishburne canceled outside visitation for all but essential deliveries. Since then, the school hasn’t had another positive case, he said.

Experts say those experiences can inform other schools. As more and more teachers are vaccinated, along with the surrounding community, Bell said he’s seen a growing acceptance of returning to the classroom. But there are still some activities that are riskier than others. High community case rates generally translate to more in-school infections. Mask wearing, social distancing and ventilation — either through opening windows or HVAC filters — are other clear ways to reduce the risk of transmission.

Other activities are less obvious. Grace Creasey, executive director of the Virginia Council for Private Education, said many schools believed their outbreaks were linked to recreational sports leagues — where students and parents from different campuses and different neighborhoods gather and play together. Epidemiologist Chtaura Jackson, who leads the Richmond-Henrico Health District’s K-12 response, said some private schools in the area had started pooled testing for children who play on sports teams.

Other high-risk activities include band and choir practice — settings where aerosols have the opportunity to spread within closed spaces. Mitigating those specific risks is a way to refocus the school reopening debate debate, Bell said.

“It’s always been the case that any indoor activity will increase the risk of cases,” he said. “It’s not really a ‘Should we do it or should we not?’ It’s really a ‘What’s our risk tolerance and what are we going to prioritize?’”