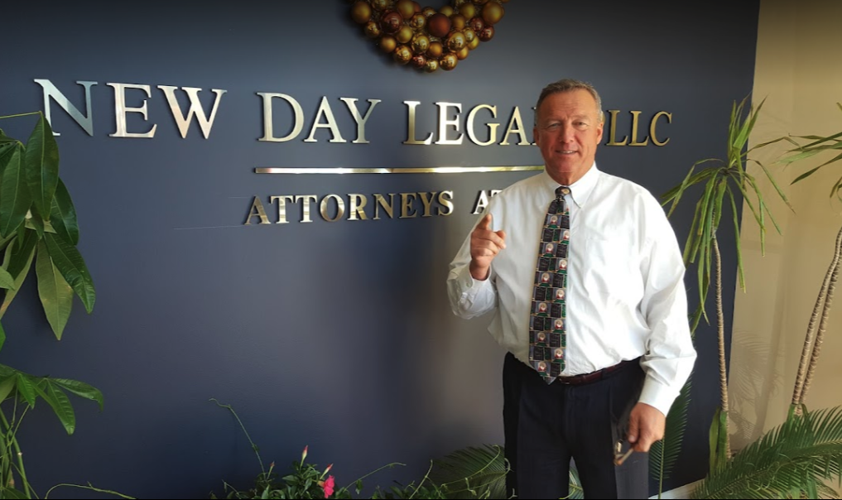 John Carter Morgan, Jr. has been associated with New Day Legal, a Warrenton-based law firm, since 2016, according to state corporation records. On Feb. 7, however, Morgan said he was no longer associated with the firm. 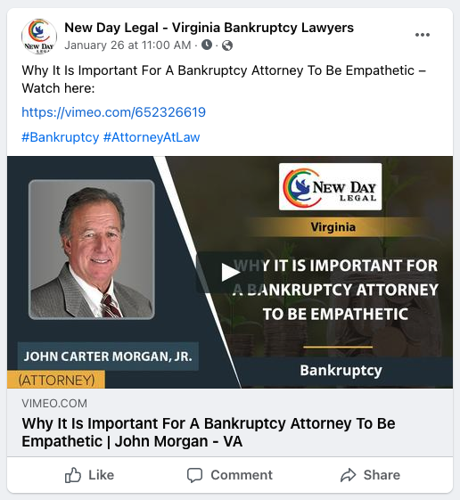 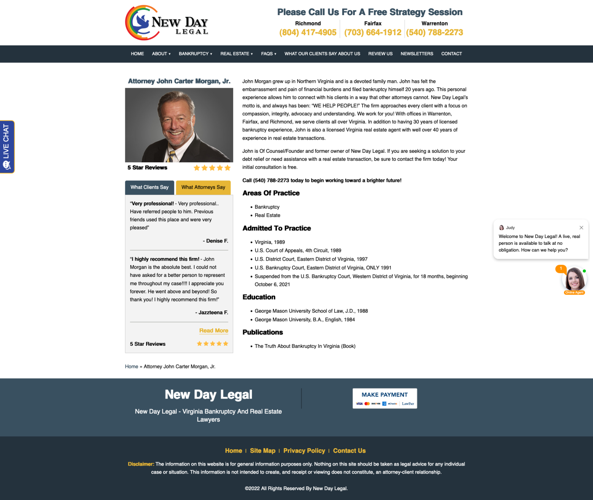 A screenshot taken Feb. 3 shows a page on the New Day Legal website with information about John Carter Morgan, Jr. The page has since been removed.

A three-judge panel in Fauquier County Circuit Court has suspended a Warrenton attorney’s Virginia law license for one year. The action stems from his participation in a multi-state legal services scheme that the U.S. Department of Justice called a “bankruptcy boiler room” and a “telemarketing referral business” that “preyed upon some of the most vulnerable in our society” — those in severe financial distress.

For his role in the scheme, John Carter Morgan, Jr. is forbidden from practicing law in Virginia until Jan. 25, 2023.

Stemming from the same misconduct, Morgan had also been barred for 18 months from filing cases U.S. Bankruptcy Court for the Western District of Virginia following a four-day trial in 2018. That suspension began last year and expires in April 2023. He was also fined $5,000 by the federal court. The judge who presided over the federal misconduct trial said that Morgan was “defiant, unremorseful and wholly lacking in credibility.”

Morgan is associated with two firms headquartered at 98 Alexandria Pike, Warrenton, according to state corporation records: John Carter Morgan, Jr., PLLC — Morgan is the only member listed — and New Day Legal, for which Morgan is listed as a co-owner with Richmond-based attorney Suad Bektic.

On Jan. 26 — the day after the panel of judges suspended Morgan’s license — New Day Legal posted a video featuring Morgan to its Facebook page. The video, titled “Why It Is Important For A Bankruptcy Attorney To Be Empathetic,” made no reference to the previous day’s ruling.

On Monday, however, Morgan said that he is “no longer associated” with New Day Legal. Bektic did not respond to an emailed list of detailed questions — including about his professional relationship with Morgan — sent last week by the Fauquier Times.

Morgan was a “local partner” in a national scheme run by a Chicago-based law firm doing business as Upright Law. The judge fined Upright $250,000 and barred the firm from filing cases in the Western District of Virginia bankruptcy court for five years. Morgan was one of two Upright “local partners” disciplined by the court.

U.S. Bankruptcy Judge Paul Black in 2018 ruled that the company had caused “unconscionable” harm to vulnerable individuals, on many occasions taking money from clients while providing subpar legal services — or none whatsoever. 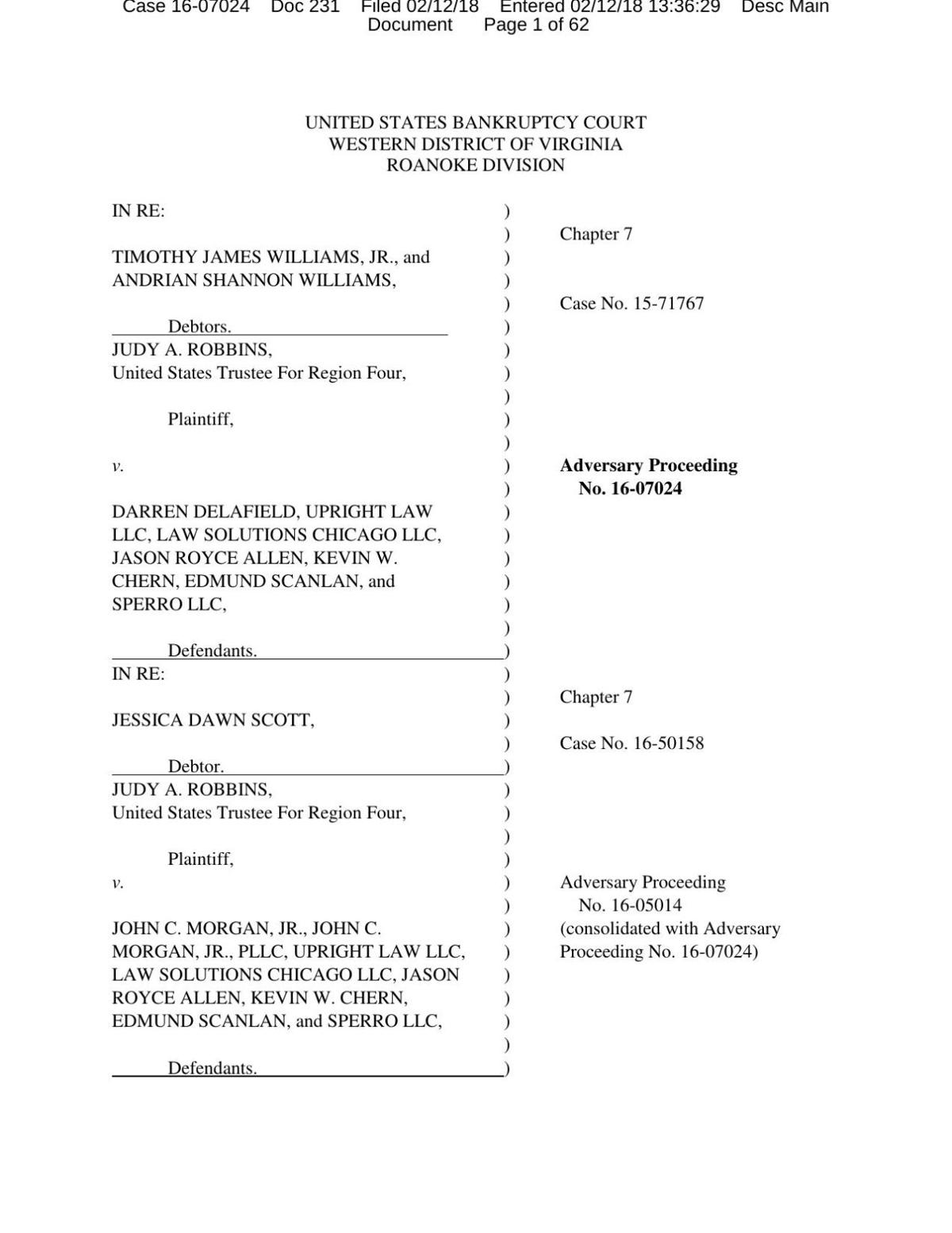 The judge’s ruling described a “playbook” used to train Upright salespeople in Chicago, calling it “replete with high-pressure sales tactics” that are “unsettling to the court.” At times, the behavior of the Chicago-based salespeople constituted the practice of law by unlicensed individuals, the judge ruled.

The judge singled out some of the instructions listed in the “playbook” for particular criticism. For instance, if a potential client says, “I need to pray about it,” salespeople were directed to respond: “I appreciate that. I pray about every decision I make myself. How are you most comfortable praying? Let’s pray together. I trust God won’t mislead either of us. I am willing to accept God’s will for the both of us.”

“Lawyers who inadequately represent consumer debtors harm not only their clients, but also creditors and the integrity of the bankruptcy system."

— Statement from Cliff White, director of the executive office of the U.S. Trustee Program, following the 2018 ruling by a federal judge sanctioning Upright Law

After a successful pitch to a potential client, the federal judge ruled that desperate clients paid — nearly $2,000 in some cases — for services that were never rendered. This was especially harmful in cases where Upright arranged a “payment plan” for a client.

In 48% of the cases filed in the Western District of Virginia, for instance, Upright clients were unable to complete their payment plan and no legal services were provided to the individual, according to the ruling. This was despite the fact that Upright salespeople told clients that “payments made are direct compensation for … work on your case and are generally non-refundable.”

Morgan agreed to become a “local partner” for Upright in 2014, according to records presented at the trial. The case at the center of the disciplinary actions against Morgan involved a client referred to him by the Upright sales team the following year, in 2015, according to the federal ruling.

“I would say that my wife has superior knowledge of the law and the conduct of the signing and the elements of the bankruptcy petition.”

— Statement from John Carter Morgan, Jr., made during a 2018 trial in federal bankruptcy court

In fact, according to trial transcripts, Morgan said that he often asks his wife for guidance on legal matters. “I would say that my wife has superior knowledge of the law and the conduct of the signing and the elements of the bankruptcy petition.”

Later, Morgan delegated his services to another attorney for a client meeting, claiming without any supporting documentation that his client had given him permission to do so, the judge said. “His own time records reflect [Morgan] attended the … meeting,” the judge wrote, “when clearly he did not.”

Morgan’s client was eventually successful in applying for bankruptcy protection, according to the federal court ruling. But along the way, according to the judge, Morgan falsified his client’s signature on a legal document — a document the client did not even know existed until later — and waited months to correct the error-ridden documents prepared by his wife.

‘A scam from the start’

At the heart of Upright’s operation was a concerted effort to pressure customers into giving up their financed vehicle — often one of the last remaining assets a person filing for bankruptcy possessed — as a form of payment for legal services to Upright.

The judge called the arrangement with Sperro “a scam from the start.” While there is no indication in court documents that Morgan had a direct role in facilitating the vehicle-payment program, the judge ruled that Morgan failed initially to disclose that his client had given up their vehicle to the Upright-Sperro scheme.

The individuals affected by the firm’s and attorneys’ misconduct — including Morgan’s client referenced in the court ruling — were harmed “through no fault of their own,” the judge ruled.

“None of the debtors appears to have done anything more than seek out help due to severe financial distress and rely on whoever was advising them what to do — be it an Upright salesperson in Chicago or their local attorney. They did not know where else to turn and it is truly unfortunate they have been drawn into this maelstrom,” the judge wrote.

“After many legitimate appeals, I completely accept Judge Black’s ruling."

Morgan said that he has not been a “limited partner” with Upright since 2016. He said that he “counseled hundreds of people” referred from Upright and filed 63 bankruptcy cases for Upright clients.

He declined to dispute any of the facts asserted in the 2018 ruling that led to his license suspension. “After many legitimate appeals, I completely accept Judge Black’s ruling,” he said.

Despite the temporary loss of his law license, Morgan said that he plans to resume practicing law after he regains his license. “I enjoy helping people. That is what I have built my practice on. So, after I complete the terms of the agreed disposition, it is my intention at this time to continue in the practice of law.”

The disciplinary actions in 2018 and last month are not the first occasions on which John Morgan, Jr. has been disciplined for violating professional rules of conduct.

In 1992, the Virginia State Bar placed him on probation for one year. Then, a panel of judges found, Morgan had interviewed a criminal defendant without that defendant’s lawyer present; Morgan was able to convince the individual to take the blame for a crime that two of Morgan’s own clients were also accused of committing.

In 2000, Morgan himself pleaded guilty to two felony cocaine possession charges, for which he was sentenced to five years in prison — all suspended — and 99 years of supervised probation. His law license was suspended for three years.

Morgan again came before a disciplinary panel in 2016. While the three judges on the panel ruled that Morgan had kept cash payments from clients in a safe — instead of depositing the money into a trust bank account as required by professional conduct rules — they found that the violation was “clearly not of sufficient magnitude to warrant disciplinary action.”

The sanctions imposed by the bankruptcy court for the Western District of Virginia are not the only discipline to which Upright Law and its “local partners” have been subject.

Despite that fact, Upright continues to operate in most parts of the United States — except in specific courts where it has been banned. Upright continues to advertise “over 350 attorneys in cities and towns throughout the country waiting to help you get a fresh start.”

According to a March 10, 2021, statement from the U.S. Department of Justice’s Trustee Program, “Upright has paid or been ordered to pay almost $900,000 in monetary relief, including returning fees to over 500 impacted consumers and paying court-ordered sanctions, attorney’s fees and costs. Additionally, bankruptcy courts have imposed practice bans against Upright in at least four jurisdictions.”

Upright did not respond to a request for comment.

On the New Day Legal website, John Morgan, Jr. claimed as of Feb. 4 to be a “licensed Virginia real estate agent with well over 40 years of experience in real estate transactions.”

Morgan, however, has not held a real estate license in Virginia since 2009, according to the Virginia Real Estate Board. After the Fauquier Times made an inquiry to Morgan, the page had been removed entirely from the New Day Legal website as of Monday.

Morgan addressed the issue in an email Monday to the Fauquier Times. “That website bio is 15 years old, and my bio was recently removed, as I am no longer with the firm. In the past 30 years I have handled real estate closings,” he said.

“I would say that my wife has superior knowledge of the law and the conduct of the signing and the elements of the bankruptcy petition.”

I wonder if he hired his wife pro hac vice for his trial?