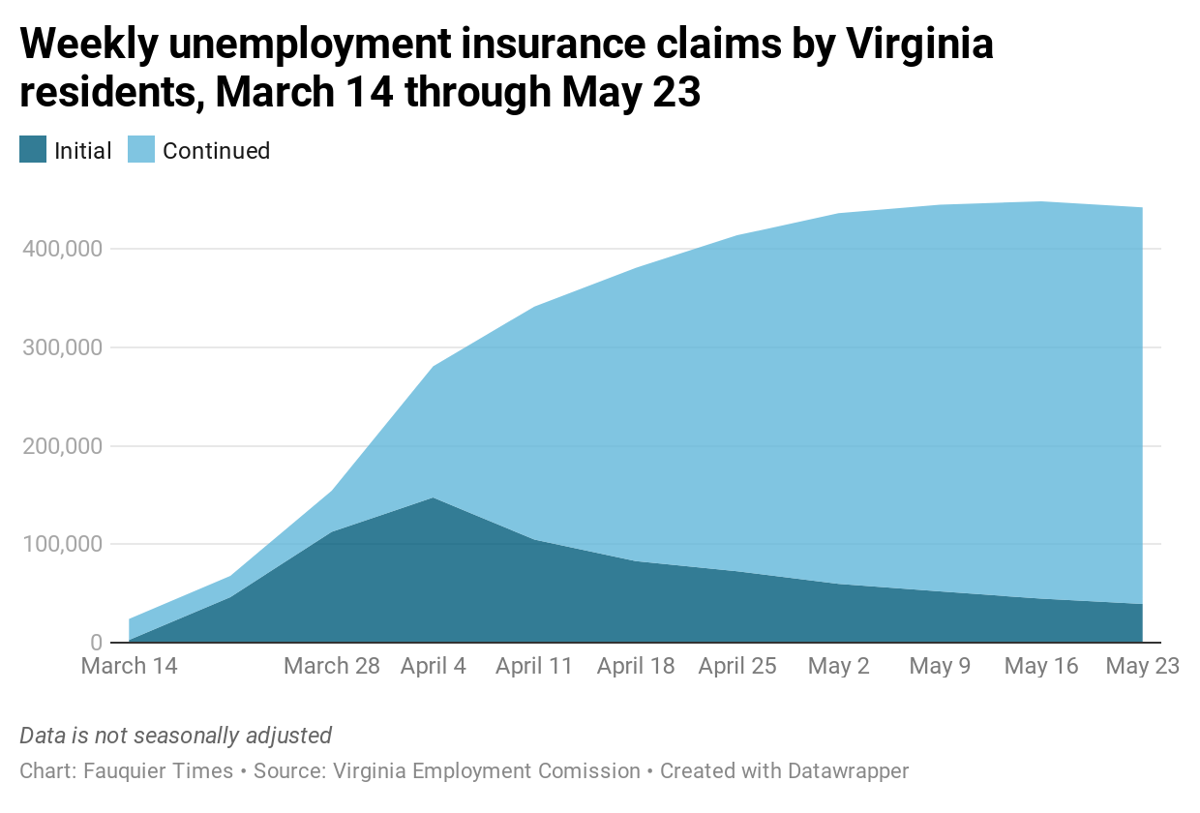 A significant portion of recent claims were made possible by a federal program created during the pandemic, however, so a direct comparison between the current situation and the Great Recession is difficult.

On Thursday, May 28, the VEC released the latest weekly statistics on claims for unemployment insurance by Virginia residents. The latest filing week ended on May 23.

Statistics from that week combined with recent data indicate that the number of Virginia and Fauquier residents who are unemployed has begun to gradually decline but remains at a historically high level.

Continued weekly claims (for those who had already filed for unemployment and been approved) stood at 2,466 in the county as of May 23, essentially the same number as a week previous.

Statewide, in the week ending May 23, 44,699 workers filed initial claims for unemployment benefits, down 12% from the previous week.

Continued weekly claims stood at 402,926 in Virginia, a 0.2% decrease from the previous week and the first time since March 14 that continued claims have declined week-over-week. There were only 18,363 continued claims filed statewide last year during the comparable week.

Phase 1 of Gov. Northam’s plan to lift restrictions on businesses and public gatherings began on Friday, May 15, for most Virginia localities – including Fauquier County – but not for some major population centers in Northern Virginia and around Richmond.

As these major centers of economic activities remain in Phase 0, the beginning of the governor’s reopening plan in some parts of the state does not appear to have changed significantly recent trends in unemployment statistics, either locally or statewide. For localities who remained in Phase 0 after May 15, Phase 1 will begin on Friday, May 29.

Claims made through PUA make up a large minority of claims made during the most recent filing week, accounting for 32% of initial claims and 48% of continued claims.

This indicates that the number of workers officially unemployed in Virginia would be significantly smaller – though still at historically high levels – had the federal government not created the program, making it more difficult to compare the current employment situation to historical data.

Nationwide, the number of seasonally adjusted initial claims for unemployment insurance totaled 2.1 million for the week ending May 23, a decrease of 13% from the previous week’s revised total. The previous week’s total indicates that more than 40 million workers throughout the country have filed at least an initial claim for unemployment insurance benefits in 10 weeks.

The unemployment rate for April was announced by the U.S. Bureau of Labor Statistics at 14.7%, the highest seasonally adjusted rate recorded since that statistic was first introduced in 1947. The household survey, which along with a survey of firms is the basis for the BLS employment calculations, was conducted from April 12 through April 18.

The seasonally adjusted unemployment rate in Virginia, however, was significantly lower, at 10.6%, than the national rate. The state’s unemployment rate ranked as the 13th-lowest among the 50 states and the District of Columbia. In neighboring Maryland, the April rate was even lower, at 9.9%.

The national unemployment rate for May will be released on June 5.