At least for now, Virginia’s mask mandate has survived another legal challenge, the tenth so far. The latest suit was brought forth on behalf of Philip Carter Winery in Hume, and its representative, Philip Strother. On June 29, Judge Jeanette Irby of the 20th Judicial Circuit denied a motion to cease enforcement of the mandate while the lawsuit progressed.

Attorney Matthew Hardin, representing the plaintiffs, filed a suit on June 4 claiming that the provisions of the mask mandate contradicted the Virginia law prohibiting the wearing of face masks in public places, and was therefore not enforceable. He argued that complying with the mandate would mean violating the Code of Virginia.

“The case will proceed, to trial if necessary. The temporary injunction was just a first step. The judge hasn’t made a decision on the merits.”

Irby’s nine-page opinion rejected several points of the plaintiffs’ argument and ruled that the plaintiffs had not shown sufficient evidence that there was a “likely success [of the suit] on the merits.” However, the denial of the temporary injunction does not constitute a dismissal of the case. Hardin said in a July 2 email, “The case will proceed, to trial if necessary. The temporary injunction was just a first step. The judge hasn’t made a decision on the merits.”

At the heart of the case is Executive Order 63, issued by Gov. Ralph Northam on May 26. The order required (with many exceptions) that individuals inside publicly accessible buildings wear a face covering. The order lists the Virginia Department of Health as the only government agency charged with enforcing the order; law enforcement agencies were excluded.

Virginia will move into Phase 3 of Gov. Ralph Northam’s Forward Virginia plan on July 1, he …

The order listed seven categories of exemptions to the mask requirement, including most broadly a provision stating, “Any person who declines to wear a face covering because of a medical condition shall not be required to produce or carry medical documentation verifying the stated condition nor shall the person be required to identify the precise underlying medical condition.”

The order also exempts from the mandate anyone who is eating, drinking, using exercise equipment, has trouble breathing, needs to communicate with a deaf person or is obtaining government or medical services.

As of July 2, no legal action related to EO 63 has been brought against any individual or business in the Rappahannock-Rapidan Health District - which includes Fauquier County - according to RRHD Population Health Coordinator April Achter.

In denying the temporary injunction against EO 63, Irby cited at length the provisions in Virginia law that give the governor the authority to issue a state of emergency (Northam declared a state of emergency on March 12) and to “publish such rules and regulations and to issue such orders as may, in his judgement, be necessary to accomplish the purposes [of the emergency declaration].” Irby wrote that “the Court finds that EO 63 was enacted within the governor’s statutory powers.”

As of July 2, no legal action related to EO 63 has been brought against any individual or business in the Rappahannock-Rapidan Health District - which includes Fauquier County - according to RRHD Population Health Coordinator April Achter.

At another point in the opinion, Irby wrote that “the plaintiffs focus on their fear of prosecution or enforcement of either EO 63 or [the Virginia law that prohibits the wearing of a face mask to conceal one’s identity].” She continued, “The court finds that such harm is purely speculative and is not irreparable. Indeed, the plaintiffs have not alleged that they have been threatened with sanctions, let alone prosecuted.”

Later, Irby claimed that “even the full effects of EO 63 still place very little burden on the plaintiffs compared to the defendants' goal of reducing the spread of COVID-19.”

Hardin disagreed, claiming “Business owners are facing a dizzying array of new orders and regulations, some of which contradict each other. Failure to comply with all of them - which is inevitable given these conflicts - can lead to a business being shut down or even to criminal charges.

“Nobody should have to operate a business each day while facing such obstacles. Honest citizens just need to know what the law is so that they can follow it, and it shouldn’t be a burden for the government to clear up the legal mess it has created.”

Hardin said he and his clients will pursue the suit to trial. “I’m disappointed that we didn’t get a victory on the temporary injunction, but the case was not dismissed, and we look forward to trial. The unfortunate thing is that while we await the full resolution of the case, my clients still have to live in this environment of legal uncertainty.”

Virginia Attorney Mark Herring responded to Irby’s ruling with a June 29 tweet. “I’m really proud we were able to defend this common-sense measure to help stop COVID. Masks save lives,” he said, adding in an attached video, “As COVID cases spike in areas around the country, we know our progress in controlling COVID in Virginia is real, but it requires a sustained commitment to doing things like wearing a mask and social distancing.” 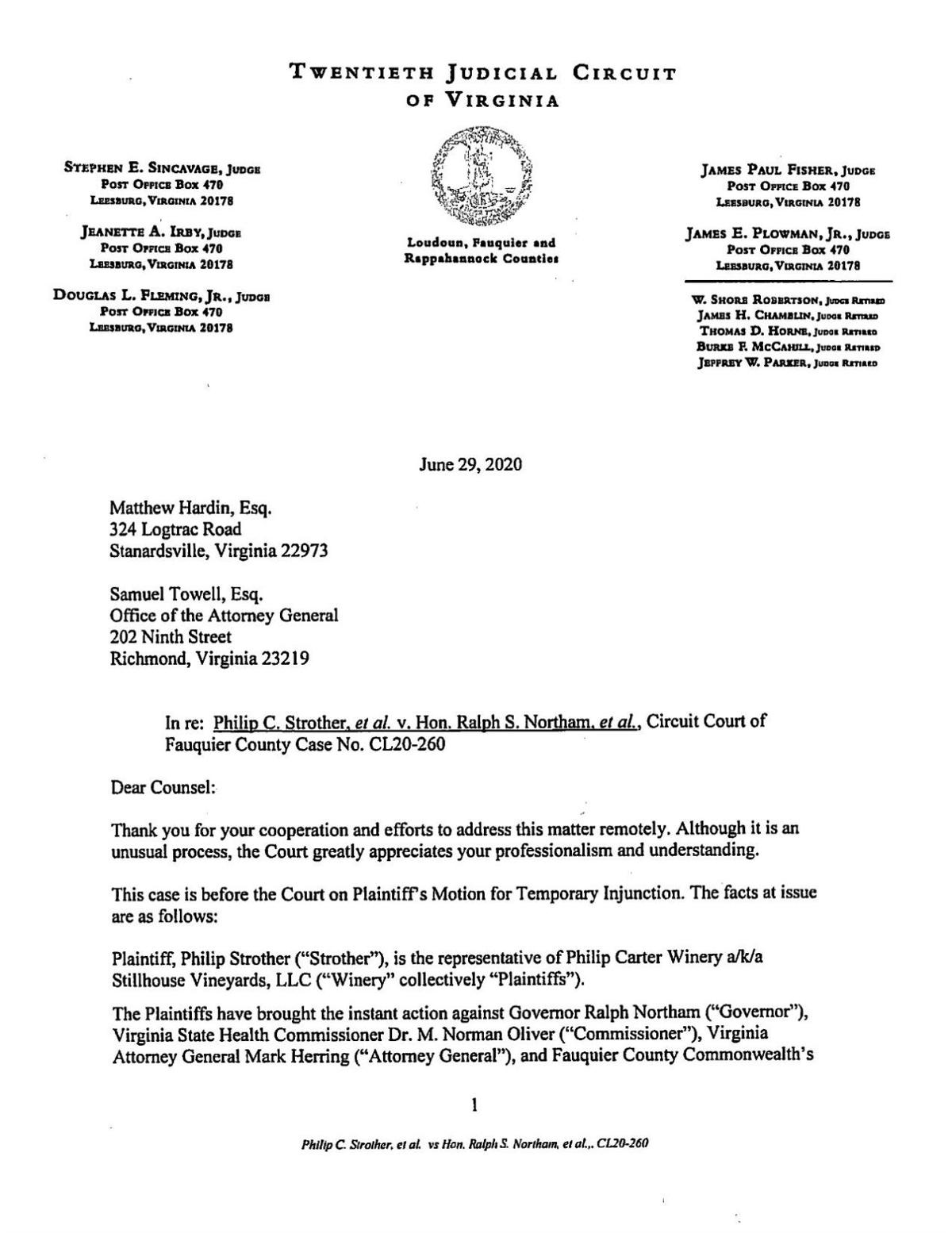