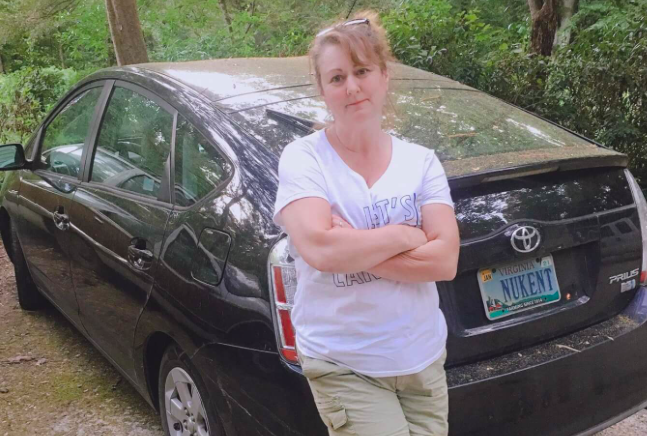 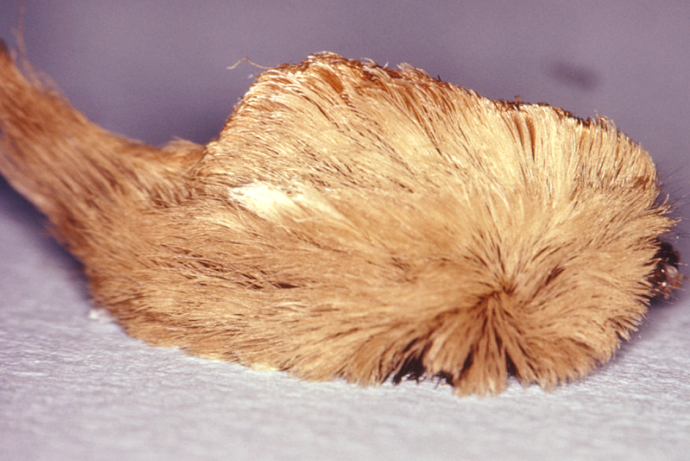 The puss caterpillar, (Megalopyge opercularis) which can inflict a painful sting on people. 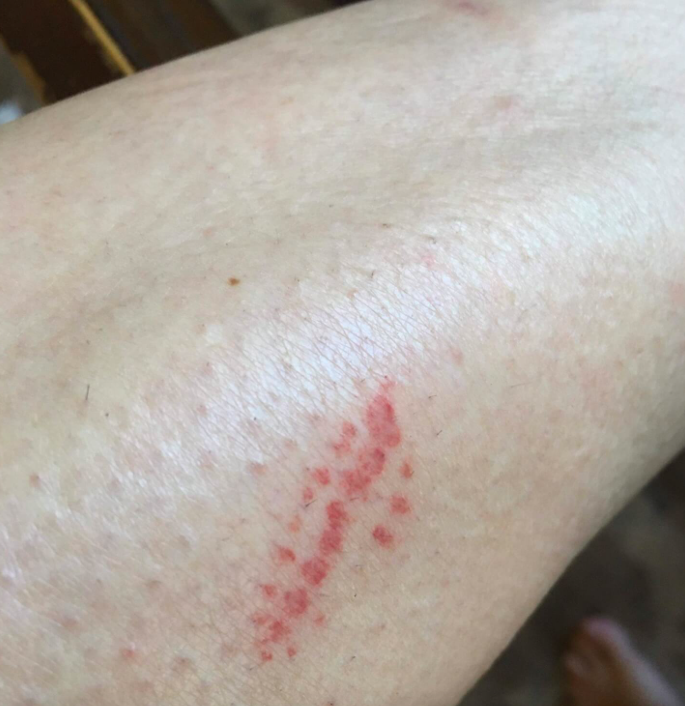 A puss caterpillar left this mark on Crystal Gaston’s leg. 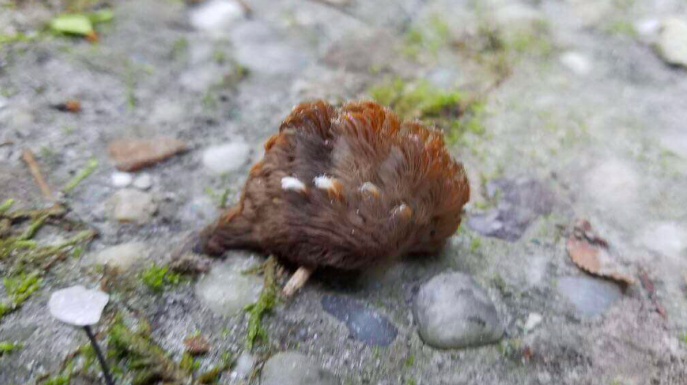 The puss caterpillar that stung Crystal Gaston in New Kent.

Crystal Spindel Gaston was reaching into the rear door of her Prius outside her house when she felt an excruciating pain in her right leg.

“It felt exactly like a scorching-hot knife passing through the outside of my calf,” said Gaston, 55, of New Kent County. “Before I looked down to see where it came from, I thought 100 percent I was going to see a big piece of metal, super sharp, sticking out from my car.”

What she saw baffled her. Clinging to the car, just below the door, was a brownish, hairy creature, not quite two inches long, resembling a miniature cat, or maybe a tiny toupee — or to Gaston, a “Star Trek” fan, a furry alien called a tribble.

“That’s when my brain really flipped out,” Gaston said, “because I just didn’t know what I was looking at. I knew it was probably an animal or a hive or a cocoon or something, but it was no shape of any animal I had ever seen. It was a cross between like a mouse and a slug.”

Feeling “white hot pain,” Gaston went to an emergency room. It would be three days before she started feeling normal again.

“In the United States, the most severe stings” of any caterpillar belong to the puss, according to a 2010 study for the Journal of the American Academy of Dermatology.

The puss is normally uncommon in Virginia, but for some reason — probably a natural cycle — it seems pretty abundant this year, said Eric Day, manager of Virginia Tech’s Insect Identification Lab. “It just seems to be an outbreak year.”

The caterpillars are tiny when they hatch in early summer — about one-eighth of an inch long. People find them more often in late summer — like now — after the insects have had time to grow, up to about 1 ½ inches, experts say. The bigger ones pack a bigger wallop.

You are more likely to find the puss in backyards, where it eats tree leaves, than deep in the forest, Day said. It is not a huge tree pest.

Reactions to the caterpillar’s sting include severe pain and, rarely, nausea, vomiting and even seizures. Reactions vary by a person’s sensitivity and by the amount of venom that’s released, experts say.

“I am not aware of fatal cases,” said Rutherfoord “Ruddy” Rose, director of the Virginia Poison Center at Virginia Commonwealth University. The center serves 3.2 million people in central and eastern Virginia.

“We receive an average of two to three cases a year – so not common here,” Rose said by email. “We get far more insect bites and even snake and spider bites than we do caterpillar stings.”

The puss is the caterpillar form of the small, harmless southern flannel moth. You can find it from Maryland to the Deep South and west to Texas. The puss is also called the asp or asp caterpillar, an apparent reference to the venomous snake of the Nile region.

Hairy and somewhat disheveled, with its head often hidden, the puss caterpillar looks like a bad comb-over. National Geographic called it a “toxic toupee.” Other articles have compared it to Donald Trump’s hair, years before he became president.

The puss is covered with soft hairs that a child might like to pet, said David N. Gaines, Virginia’s public-health entomologist. But hidden within those hairs are hollow, venom-filled spines that can break off in your skin, causing the pain.

The venom helps protect the puss against predators.

The puss — named for its resemblance to a cat’s fur — is among a handful of venomous caterpillars in Virginia.

Virginia has hundreds of venomous creatures. They include bees, wasps, ants, three snakes, giant water bugs “and the poisonous blister beetles, which can ooze irritating fluid,” said Barbara Abraham, a Christopher Newport University entomologist who teaches a course in toxic and venomous animals.

“We also have spiders, centipedes and even a scorpion,” Abraham said. “The only one of these that is of concern is the black widow spider. …

“My take is that you wouldn’t want to get stung (by the puss), but a healthy, non-allergic individual would not be at risk of severe effects,” Abraham said. On the other hand, “anything is possible in case of anaphylaxis,” a severe allergic reaction, she added.

Schools were closed temporarily in San Antonio, Texas, in 1923 and Galveston, Texas, in 1951 because lots of puss caterpillars were stinging children, scientists say.

A Virginia Cooperative Extension fact sheet says: “Often a person stung by a caterpillar will instinctively brush or knock the caterpillar off, which may break more hairs and further spread the irritating hairs or poison.”

“The irritation can last for a day or two … Usually the injury resolves without any complications.”

Gaston said “day three was the turning point” for her. Before that, “Pain came in waves.”

Gaston’s ordeal began about 8:20 a.m. on Friday, Sept. 4, when she and husband Dennis were about to leave for a Labor Day weekend trip. Their truck was running.

“The dog was packed. Everything was packed, and at the last second I remembered I wanted to get something out of my car,” she said.

She brushed the caterpillar with her right calf when she reached into the car.

“I knew something happened from the way she screamed in pain,” said Dennis Gaston, a state forester. “So I went over there and saw (the caterpillar) and thought, ‘What in the world is this thing?’ I had never seen anything like that. I really didn’t even know it was a caterpillar.”

Despite the severe pain, “I grabbed an ice pack and jumped in the truck” to make the trip, Crystal Gaston said. But the misery was spreading quickly. “My inner thigh, my knee and my groin were in such pain.”

About two miles from home, they decided to go to VCU Health’s new emergency center — a freestanding ER — in nearby Quinton.

“When I first got there I was really seeing stars and was doubled over,” Gaston said.

In the ER, she was treated by Dr. Philip C. McCoy. “Doctor McCoy” — also the name of a “Star Trek” character — got Gaston thinking about the show again. She said she and McCoy talked about the fuzzy creatures on the show called tribbles. “The nurses were stumped, but we were Trekkie talking.”

Gaston said her husband texted her a photo of a puss caterpillar, and she showed it to the doctor and nurses.

“They all had this mixture of like horror and flummox,” Gaston said. “One of them actually said, ‘What the hell is that?’ “

Gaston said she and the medical workers looked online for information about the caterpillar. “We all read together.”

Nurses used sticky medical tape to pull the caterpillar’s spines out of her leg. (She found more spines days later.) Gaston said she was treated with antihistamines and over-the-counter pain meds and was out of the ER in about an hour.

Even after she left, the stung spot “felt like a second- or third-degree burn, and I felt super achy, like my bones hurt.”

McCoy could not be reached for comment, but an employee of the emergency center confirmed that the center treated a patient for a “strange” insect sting Friday.

“We all got a kick out of that,” said the employee, who asked not to be named. “It was the talk of the weekend.”

Gaston lives in central New Kent about 30 miles east of downtown Richmond. An English teacher, she is taking a break from work because of COVID-19.

Days after the incident, Gaston still had red marks on her calf showing precisely where the venomous spines punctured her skin.

Rose, of the poison center, said Gaston’s experience was not “unusually bad. Local symptoms can last up to a week. Pain may require prescription strength medication when (over-the-counter meds) are insufficient.”

Gaston and her husband are outdoorsy. They have outdoorsy friends. “No one has heard of this caterpillar,” she said.

”I just want people to know about these,” Gaston said. “It’s almost a cruel trick of nature. They look like a plush toy, something soft, and they could be very alluring to a child.”

If you are stung by caterpillar, health professionals suggest you use the tape method to remove the spines. You should wash the site. Putting rubbing alcohol or a baking soda slurry on the sting might help. If you have a severe reaction, see a doctor.

Think our world is troubled today? “On top of everything else,”  said Virginia Tech’s Day, “we’ve got the puss caterpillar.”