UPDATE: Members of the Middleburg Planning Commission voted unanimously Monday night to delay a vote on whether to approve a preliminary application for a 38-home development on 571 acres just outside town limits. The commission will convene on Monday, Aug. 10 to vote on the matter.

The vast majority of public comments – most of which were submitted by phone or email – asked the commission to deny the application. Of 76 public comments, 65 were opposed to the project. The Piedmont Environmental Council, the Goose Creek Association, the Mosby Heritage Area Association and the Loudoun County Preservation and Conservation Coalition all oppose the project. Concerns about the effect of the development on the town’s water supply, along with potential impacts on traffic, tourism and archeological resources, were cited repeatedly by those commenting and echoed by commissioners.

After four hours of deliberations and public comments, commissioners cited the need to clarify technical aspects of the application – especially on potential impact on the water supply -- with the developer and town staff before making a decision. None of the commissioners expressed personal support for the project.

The proposed development, dubbed the Banbury Cross Reserve, follows Loudoun County zoning ordinances and cannot be denied except on the basis of technical deficiencies specific to existing zoning ordinances. Although the project would be outside town limits, a portion of the proposed development falls within one mile of the town boundaries, so the town planning commission must vote on whether to approve the application.

Deputy Town Administrator Will Moore and board chairman Terence Cooke both emphasized repeatedly during the meeting that, because the proposed development adheres to current Loudoun County zoning laws, the planning commission does not have the legal standing to deny the application unless commissioners cite specific technical deficiencies in the application and lay out how the developer can resolve those issues.

“Our role,” said Cooke before the public hearing, “is to determine whether the preliminary plat satisfies the conditions set out in the county and town ordinances.” 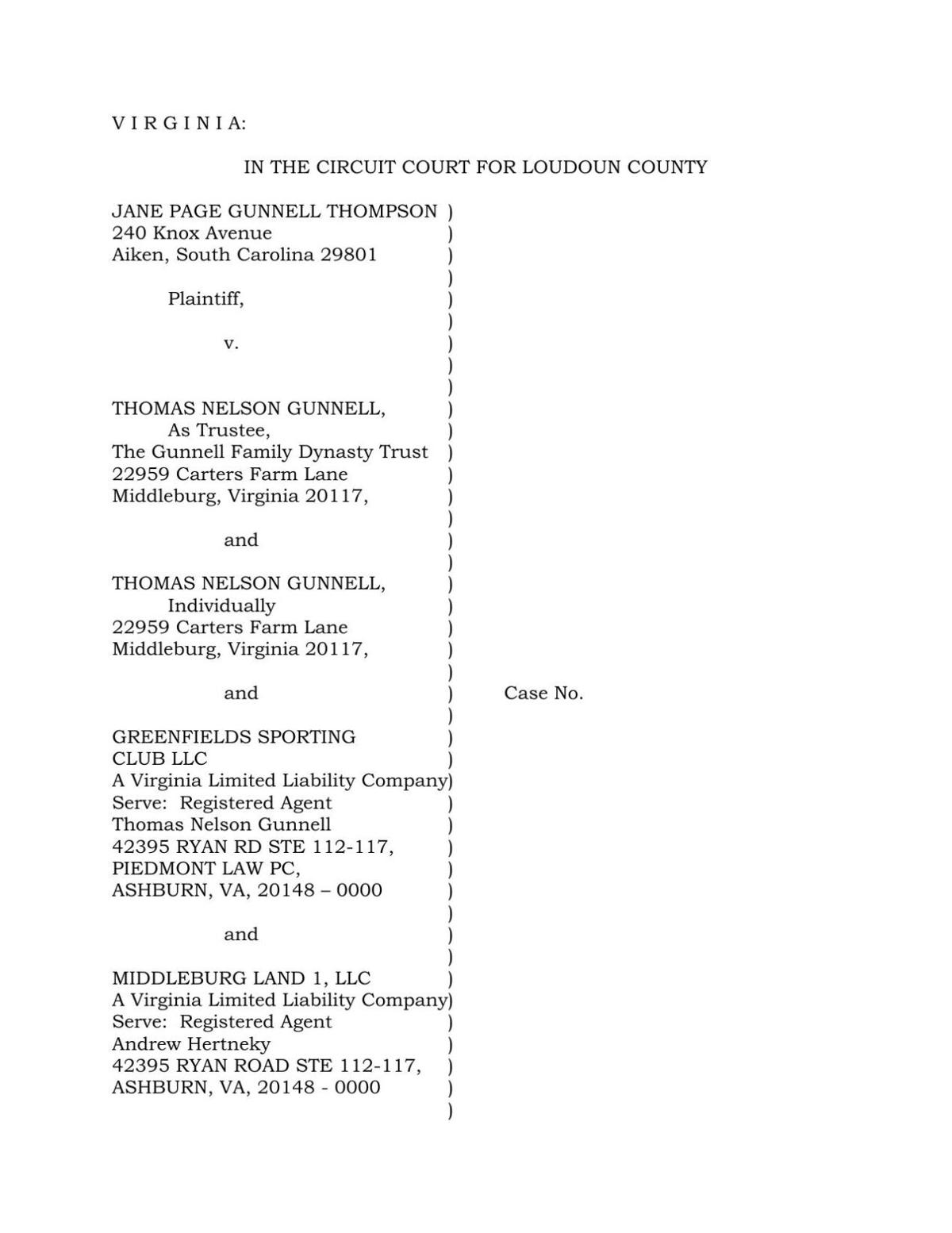 A last-minute lawsuit filed in Loudoun County a few hours before the meeting also caused commissioners to hesitate on voting on the application Monday.

Jane Page Gunnell Thompson alleged in the suit that she is entitled to a portion of the family trust which now includes the development company seeking to build Banbury Cross Reserve. The suit claimed that Thomas Nelson Gunnel’s actions that led to the formation of the Middleburg Land 1 LLC are legally invalid, and therefore the title to the property itself is in question.

Middleburg Town Attorney Martin Crim, however, said to commissioners the suit “should not affect your deliberations this evening” as it moves through the courts.

ORIGINAL STORY: A proposed 38-home development on 571 acres just outside Middleburg has prompted an uproar from neighboring landowners and opposition from several advocacy groups, including the Piedmont Environmental Council. More than 1,100 people have signed a petition opposing the development, but it remains unclear how much legal authority county or town officials have to stop the plan moving forward. 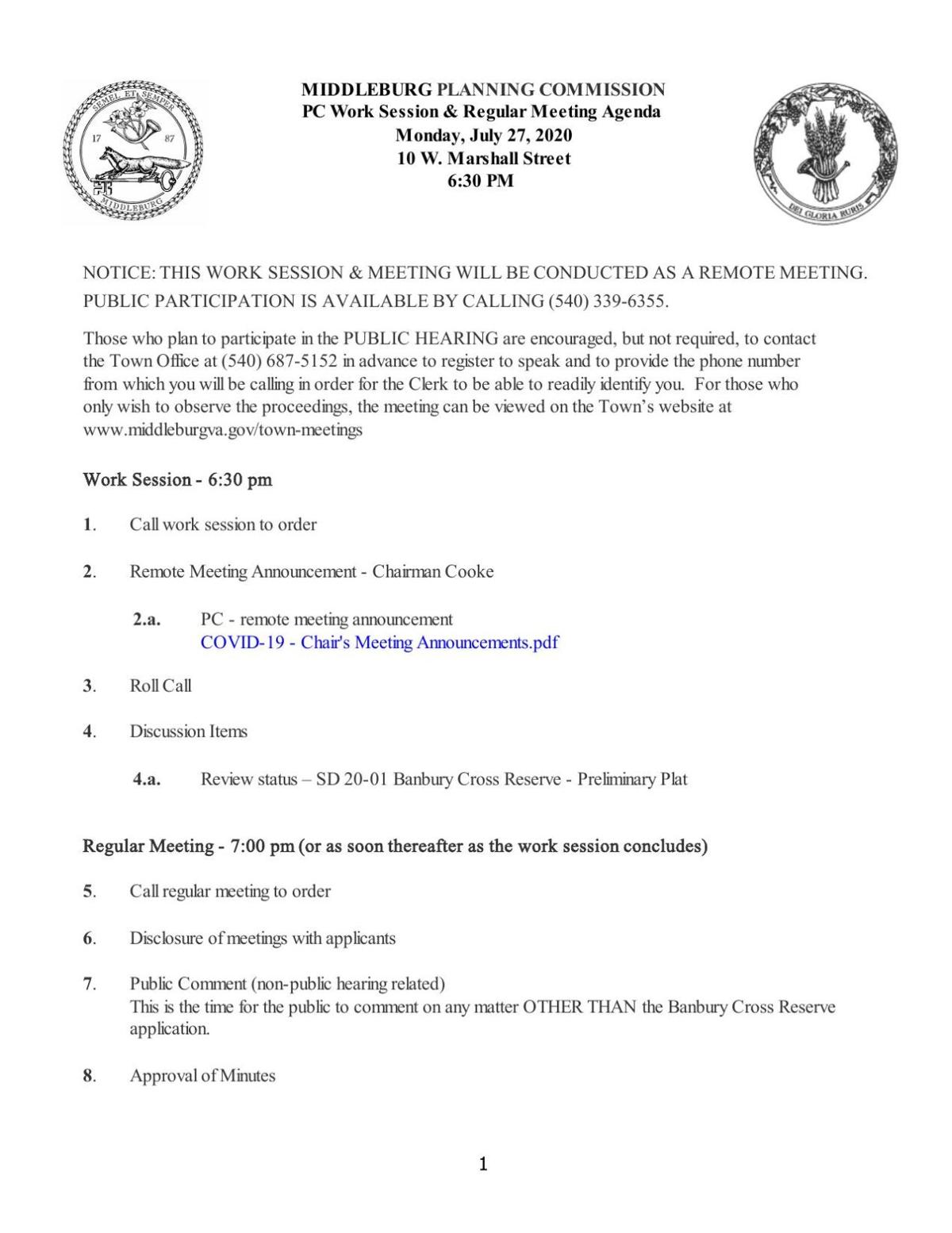 The land proposed for the development, dubbed Banbury Cross Reserve, is in Loudoun County just east of Middleburg’s town limits. Because a portion of the property lies within the town’s “Subdivision Control Area,” the town planning commission must approve the application before the project can move forward; a public hearing will be held on the issue Monday, July 27 at 6:30 p.m.

In September 2019, the town’s planning commissioners, citing “certain deficiencies” in the original application, denied the proposal and required the developer to address the issues with the county before submitting another application.

Since then, Middleburg Development 1 – the development company, owned by Andrew Hertneky of Marshall - and its Annandale-based civil engineering firm, Urban, have submitted a revised application.

Last month, county officials indicated the application met all of its administrative requirements except three: the addition of water tanks for fire suppression, a more thorough archeological review of the site and a more detailed description of planned road access points. The developer then agreed to meet those conditions. 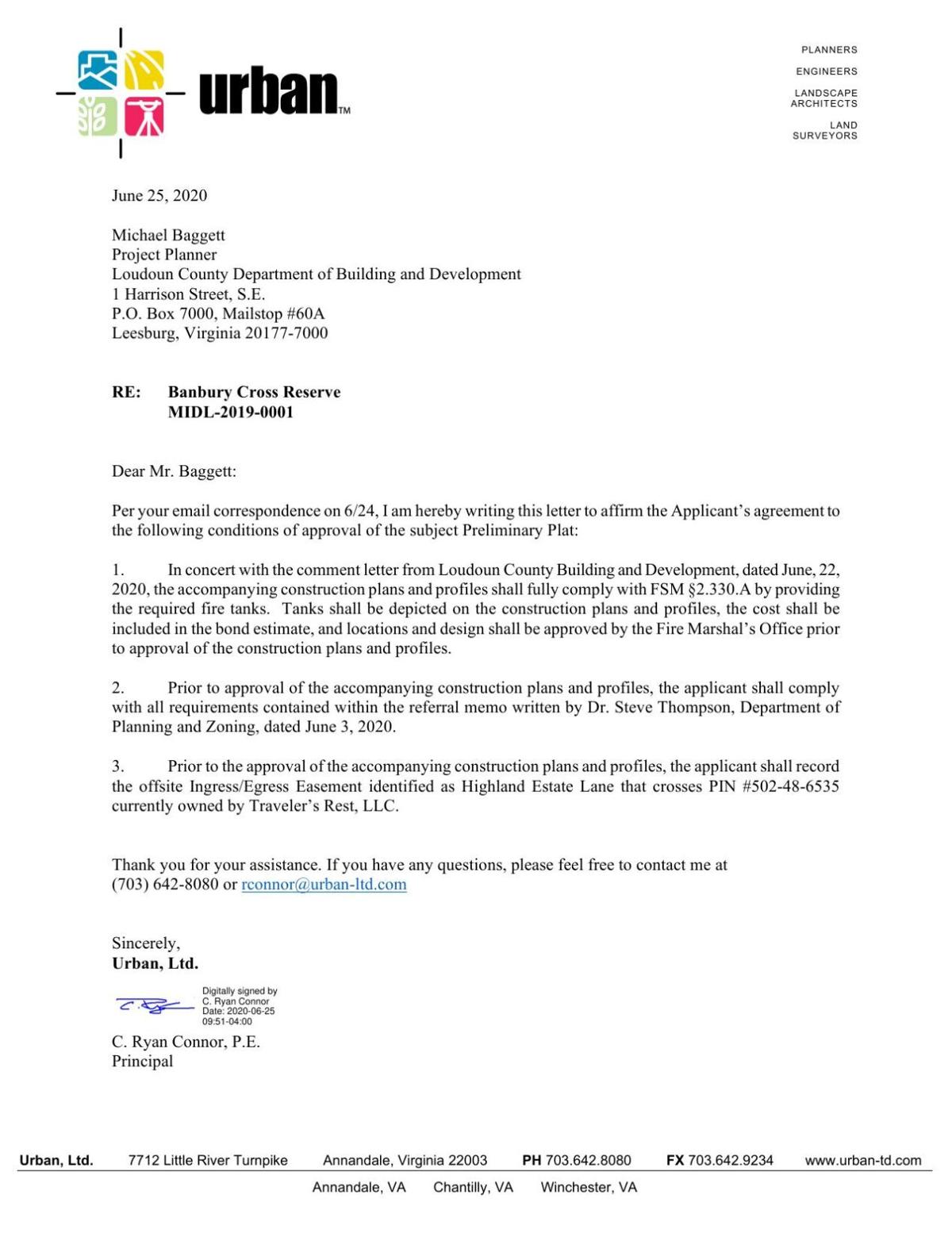 The land is zoned “Agricultural Rural - 2: Rural business and residential uses,” which allows for housing density of up to one unit per 20 acres if some structures are clustered together.

“Technically, the entire project is by-right as it employs existing zoning and does not require a special exception,” said Glen Barbour, a Loudoun County spokesperson, on Thursday. If the developer changed the scope of the project to include land that is outside of the town’s jurisdiction, the town’s commission would have no jurisdiction over the matter and it would be a wholly administrative process with the county.

Middleburg Deputy Town Manager Will Moore said Friday that, based on technical reviews of the latest application from multiple agencies, the official recommendation of the town’s staff is to approve the project.

“There have been multiple concerns [with the project] the public has brought up,” Moore said, “and we don’t want to be dismissive of those concerns at all.” But, he said, because the town planning commission does not have discretionary power in this case, the legal basis for approving or denying the application must be the technical merits – or lack thereof - of the project’s adherence to the “adopted regulatory obligations” in current law. Denying the application on subjective points may result in legal action against the town, he said.

“Changing [zoning] regulations is the best way to address those concerns,” he said. “If this type of development is undesirable to the community, then Loudoun County would need to revisit their regulations,” he explained, adding that the county has begun the process of revising ordinances related to cluster developments like the one proposed outside Middleburg. The town itself, he said, has no power to alter zoning law outside its own boundaries. 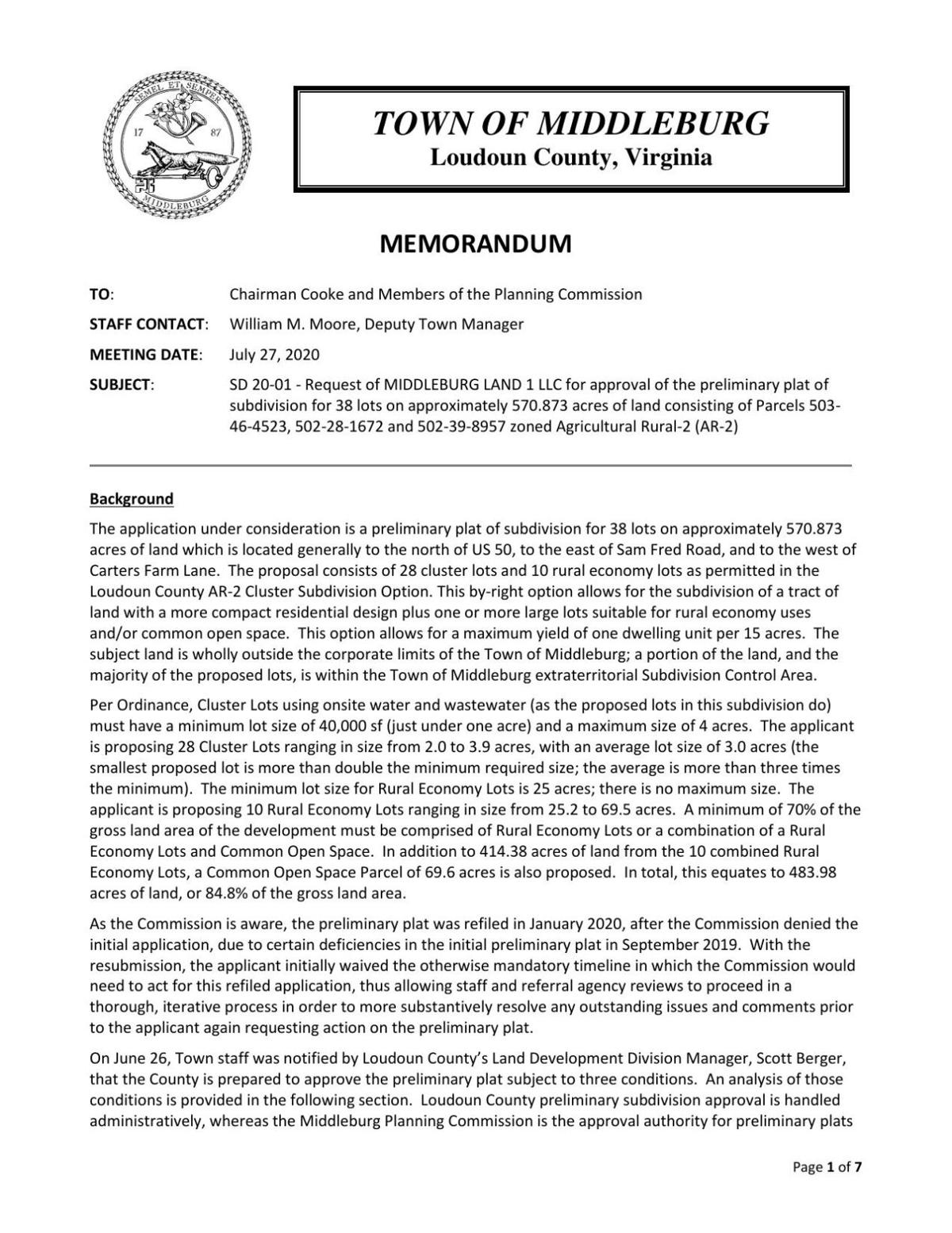 The official report submitted to the planning commission by town staff cautioned that, if commissioners choose to deny the application again, Virginia law requires them to state specific reasons for the denial that “must only include express requirements of the applicable regulations as grounds for disapproval.”

Nevertheless, opponents of the project say the latest application submitted by the developer last month is still sufficiently flawed on several technical points to provide a legal basis for denying the project again, even though the development needs no special exception or zoning amendment to proceed.

Daniel Haney, who grew up spending time in and around the proposed development and now lives west of Middleburg, has led the grassroots opposition to the project along with a group of nearby landowners. “I have been fighting development and trying to preserve open space for a few years now. So when I heard that a group of concerned citizens was joining up to oppose [the development], I offered my assistance,” he said.

The group -- which calls itself concerned Citizens in opposition to Banbury Cross Reserve Development -- lists extensive concerns about the development, calling it “unprecedented in scale” and claiming the project could “negatively impact the historic town of Middleburg and open space, agricultural lands and scenic views in one of the most pristine parts of western Loudoun County.”

More specifically, the group claims that the application itself does not conform to county requirements in several technical aspects, especially in relation to the development’s impact on water usage. The group hired an independent hydrogeologist to review the impact report commissioned by the developer, and Haney claimed Thursday the analysis found “eight technical deficiencies” in that report.

“Evaluations by a soils expert, a civil engineer, and a hydrogeologist hired by the community concluded that the studies submitted by the developer were technically flawed and did not met the minimum county requirements as stated in the Facility Standards manual,” Haney said in an email Tuesday, adding later, “The methodology used by the developer’s hydrologist did not realistically assess the potential impact to the water resources at the site from the proposed development.”

Haney said that those in the group believe that the impacts on the water supply are the best legal argument for denying the developer’s application again. “Water is our main ammunition at this point; everything else seems to fall secondary,” he said, adding that the commission should stop the project on those grounds.

The group also lists other concerns with the project, including impacts on archeological resources, wetlands, soils and agricultural potential and the potential that more buildings could be built on the site in the future.

Additionally, “The historic and scenic landscapes in and around Middleburg are important economic resources for tourism and they would be seriously diminished by the … development,” Haney said in an email, though the same email also cites the possibility of wineries or similar businesses being integrated into the development in the future as a negative impact.

The Piedmont Environmental Council’s position on the development largely mirrors that of Haney’s group, although PEC statements on the issue focus more on the structure of the county’s zoning ordinances.

Current zoning laws “do not adequately protect and preserve the quality and quantity of surface and groundwater resources that everyone in the rural area needs,” a July 6 website post from PEC field representative Gem Bingol claimed, “and they do not protect the prime soils necessary for highly productive farming.”

On the Banbury project specifically, Bingol wrote that “the cumulative impacts from multiple users and new commercial proposals will increase drawdown on the local aquifer.”

Bingol argued in an email Thursday that "A fundamental purpose of zoning is to protect human health, safety and welfare. An adequate and safe water supply is a most basic human need, and a sewer system that works properly and meets effluent requirements is critical to stream health and the local environment.” She said that Loudoun County supervisors have begun a process to update some subdivision regulations but have not addressed concerns protecting water supplies.

She emphasized that she is not an attorney and did not have a formal legal position on what Middleburg’s elected officials should do, only that they have “a statutory responsibility to its residents to act in their best interests … [and a] moral obligation to take the actions it deems necessary to protect its interests if the Loudoun ordinance doesn't provide those protections.”

A representative of Urban did not respond to a request for comment. Andrew Hertneky could not be reached for comment. 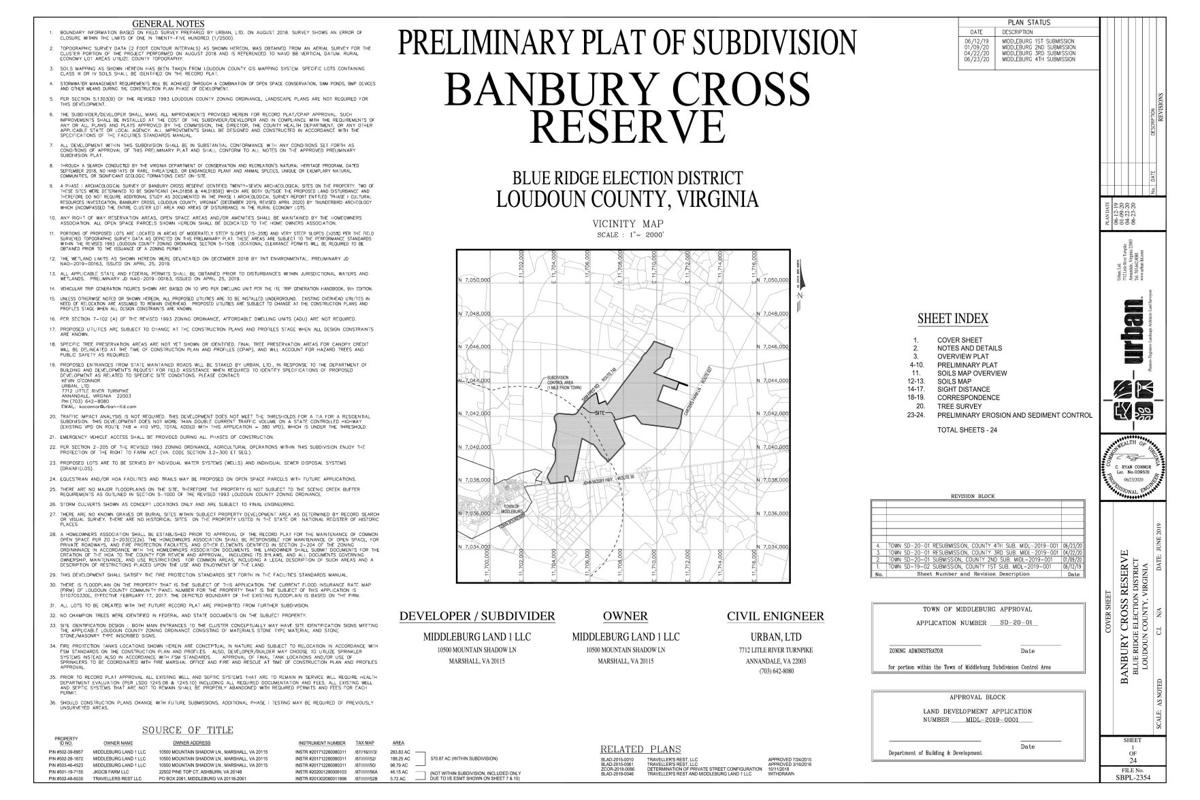