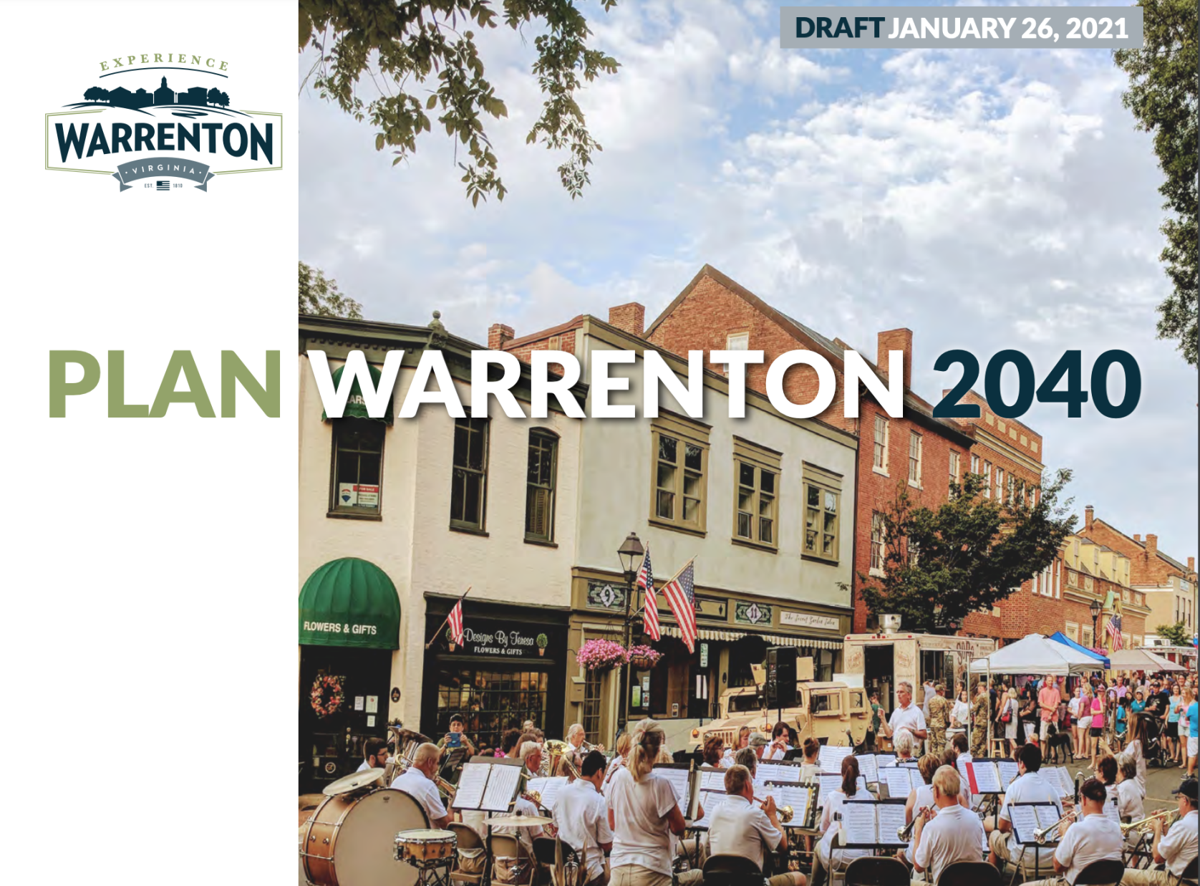 The Warrenton Planning Commission has sent the revised Plan Warrenton 2040 draft on to the town council. 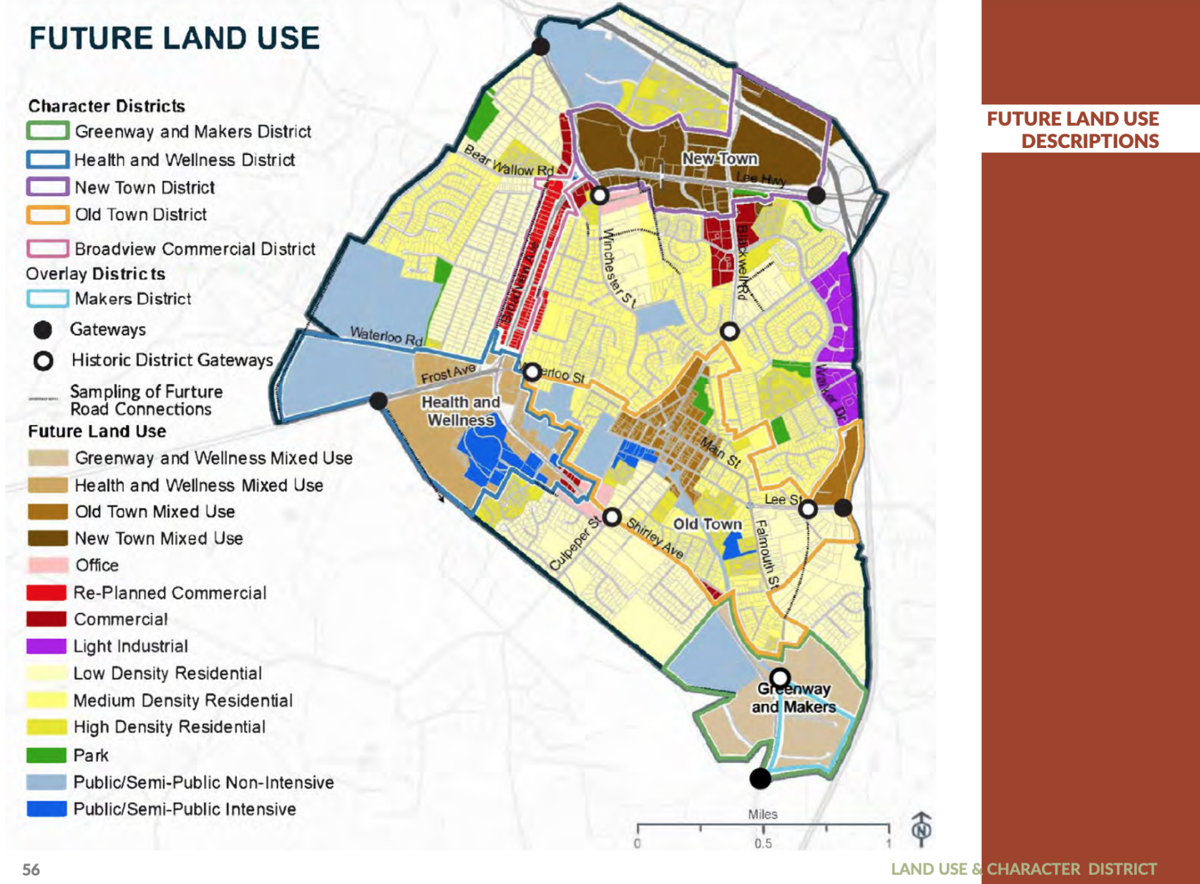 UPDATE: Warrenton Mayor Carter Nevill has confirmed that the town council will hold its first public hearing on the town's comprehensive plan at its council meeting on March 9; a second is scheduled for April 13. Nevill also said that a third, if needed, could be held in May.

UPDATE: This article was updated at 3 p.m., Feb. 19. to include comments from Dr. Ellsworth Weaver, president of the Fauquier County NAACP, Patrick Mauney, executive director of the Rappahannock-Rapidan Regional Commission and Josh Frederick, senior planner for Fauquier County.

ORIGINAL STORY: The Town of Warrenton Planning Commission on Feb. 16 voted 5-1 to approve the town’s comprehensive plan, “Plan Warrenton 2040,” sending the 81-page document to the town council for consideration. The council could review the plan at its meeting on March 9. A public hearing will be held on the comp plan before it is voted on by the council.

At its work session on Feb. 11, the planning commissioners asked town planning director Denise Harris to make a few small corrections, but no substantive discussion was held. Commissioners James Lawrence and Ryan Stewart – with the help of town staff – have spent the last six months trimming down and refining the plan from its original 502 pages. The plan had been in development for more than a year.

Many of the technical details and data-heavy sections have been removed from the main body of the plan, but clarifying explanations, data and analysis are still accessible through clickable hyperlinks. The restructuring was in response to feedback that the original document was unmanageable. The new version is also lighter on text and heavier on graphics, again with the aim of making it more accessible to residents.

The planning commission did not hold a public hearing this month on the comp plan because one had been held in July 2020, but some residents submitted written comments, which were due Jan. 8.

Reactions to the revised comp plan

Two of the letters to the council – from developer Nina Weissberg and the Fauquier Chamber of Commerce -- expressed full support of the plan. Carlton Shutt, interim executive director of the chamber, wrote, “We believe that the modest percentage of annual growth proposed, only 3%, honors the community’s desire to maintain a small town aesthetic within the context of healthy, but conservative, economic and civic advancement.”

Weissberg wrote that in addition to allowing a greater breadth of housing options – including  duplexes, fourplexes and townhouses -- the town should also add “midrise multi-family” options.

Seven commenters, though, had significant issues with the plan.

The Housing Committee of Fauquier's NAACP objected to the housing recommendations in the comp plan. Dr. Ellsworth Weaver is president of the group. The organization's four-page contribution started, “The housing section fails to clearly address the housing needs of low-income, very low-income and extremely low-income households as well as the housing disparities experienced by people of color. The plan emphasizes ‘attainable’ over ‘affordable’ housing because the term affordable carries with it negative connotations. The availability of affordable housing, however, is a matter of equity that cannot be avoided and must be addressed in the town’s comprehensive plan.”

Julie Bolthouse, Fauquier field representative for the Piedmont Environmental Council in Warrenton, submitted a 16-page letter that elaborated on a multitude of concerns. She wrote “… the new plan outlines a new growth trajectory for Warrenton that contains contradictions and leaves important questions unanswered. It fails to incentivize redevelopment and infill over greenfield development and does little to incentivize needed affordable housing. Also concerning is the eagerness of the town to rush the draft forward citing developer’s timelines as if as if this were a development application rather than a plan outlining a community vision.”

Planning commissioner Ali Zarabi, who was the only commissioner to vote not to approve the comp plan, pointed to the PEC letter and said that Bolthouse’s comments were sound and the questions she asked were thoughtful and necessary. He said he felt they should have been more seriously considered in the Plan Warrenton 2040 revision.

The PEC letter went on to address:

Several other writers also objected to the suggested bypasses. And Joseph Volpe III added, “The town ought not introduce or promote connectivity in neighborhood streets.”

Volpe also is worried that the town plan “tries to be all things to all concerned.” He commented, “I fear we will become an incoherent hodge-podge, with an Old Town that attracts diners and tourists and otherwise struggles to be something neither brand new nor an imitation of all too many communities already in place to our north.”

Judy Lamana, founder of the Fauquier Climate Change Group, expressed concern about too much new growth in the face of possible changes in water and sewer needs exacerbated by climate change. She also suggested that the town should pause the plan until the full effects of the COVID-19 pandemic are more thoroughly understood.

Before the vote Feb. 16, planning commission chairwoman Susan Helander read a lengthy statement reviewing the process that was undertaken to produce the plan and acknowledged that no plan is perfect.

She said, “We are aware there are members of the community with concerns, as well as members of the community who value the proposed goals. We want to assure the community that the planning commission heard you, weighed all of the comments, and looked at the needs of the entire community. Nothing was done lightly or without considerable review and discussion. Historical plans and studies were reviewed, current trends were analyzed and technical advice was sought. Some in the community have raised old questions without fully understanding today’s facts. We encourage those who are interested to learn the current data on a multitude of issues do so from the experts. Due diligence was pursued by the planning commission.

“We also think it is important to understand the comprehensive plan is regularly reviewed. This document is a high-level set of goals to address the vision of the community. From here, after its adoption, the town council sets strategic priorities for implementation efforts and deeper analysis in specific areas, like affordable and attainable housing. This document is a guide for the implementation tools yet to be developed. … Plan Warrenton 2040 is a document with a wealth of information that clearly conveys the community’s desires.”

Zarabi said after the Feb. 16 meeting that he hopes the Warrenton comprehensive plan is successful and it helps Warrenton to thrive, but maintained that he believed too many questions had been left unexplored.