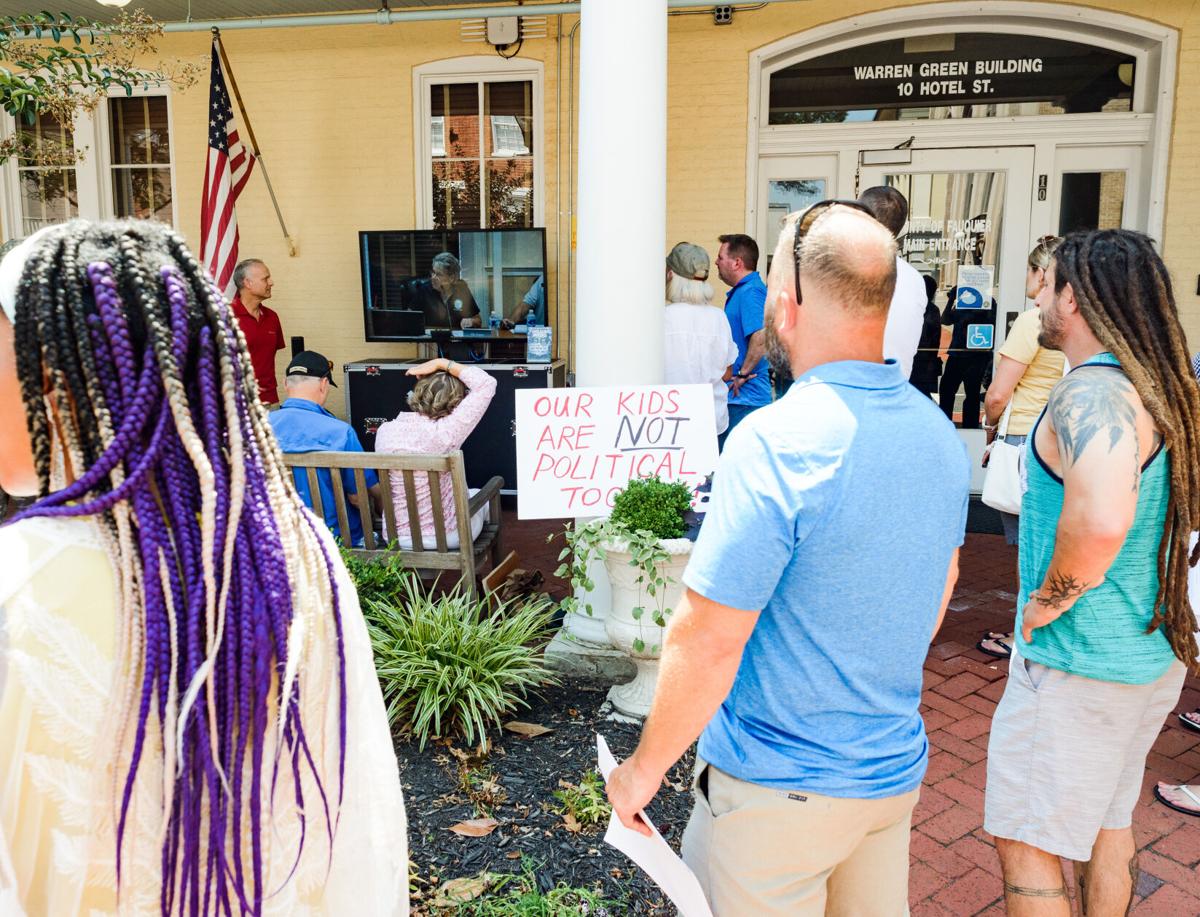 About 20 people opposed to mask wearing gathering outside the Warren Green Building to watch Friday's emergency school board meeting on a television screen on the sidewalk. 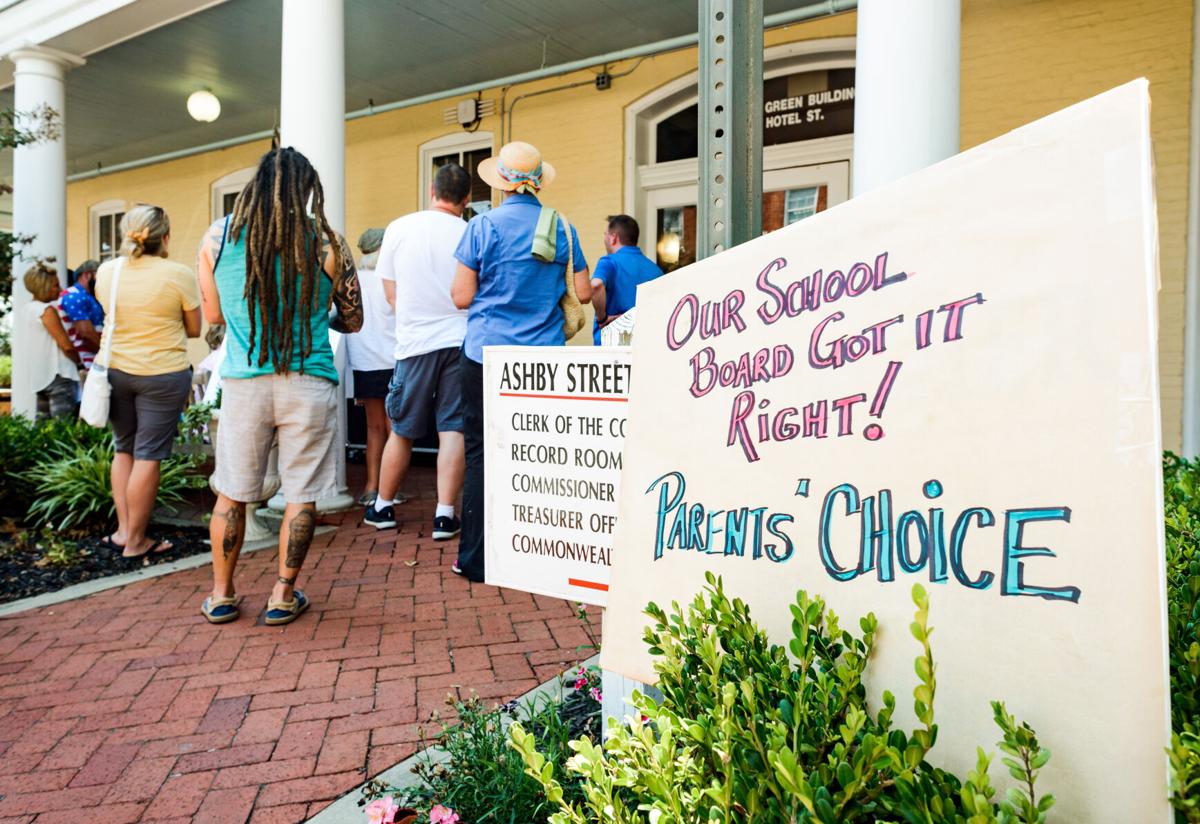 As opponents of wearing masks watch the Sept. 13 school board meeting on a television screen outside the Warren Green Building, a sign voices support for the board's initial decision not to require masks in school buildings and buses. The board reversed that decision at the school board meeting but allowed parents to opt out for medical or religious reasons. 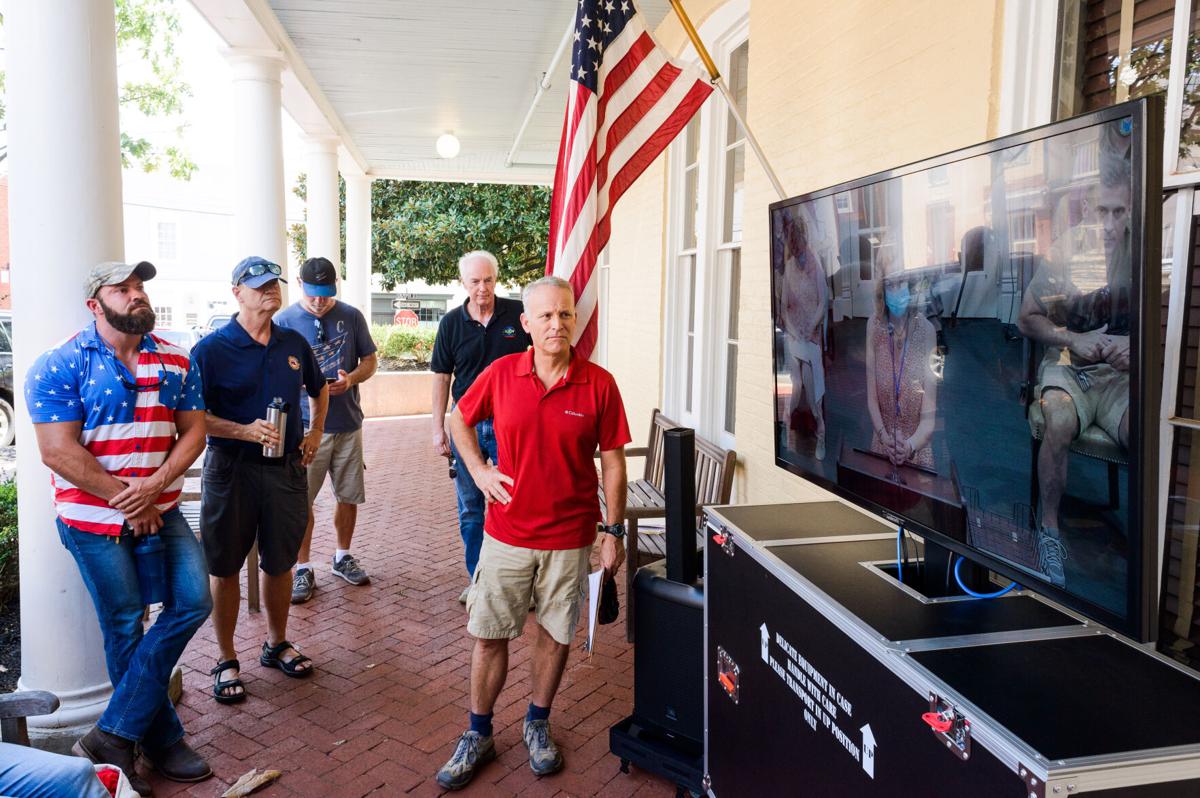 People opposed to the wearing of masks look on as April Achter, the public health coordinator for the Rappahannock-Rapidan Health District, addresses the school board.

Starting before noon on Friday, Aug. 13, a small crowd started to form on the sidewalk outside the Warren Green Building and upstairs in an overflow meeting room; both areas offered screens with live video of the main meeting room on the first floor. Inside, at 12:30 p.m., the school board convened an emergency work session to discuss a universal mask mandate handed down to Virginia school districts 24 hours earlier.

After deciding Monday at a school board meeting to make masks optional in all Fauquier County schools, the public health order -- aimed at reducing the spread of the COVID-19 Delta variant -- released by State Health Commissioner Norman Oliver required a quick turnaround, one affecting students, teachers, school staff and administrators and parents.

Fauquier schools to open Wednesday with masks optional for all

The order requires “all individuals aged 2 and older to wear masks when indoors at public and private K-12 schools in order to inhibit spread of the virus, as recommended and described by the [U.S. Centers for Disease Control and Prevention].”

Rappahannock-Rapidan Health District population health coordinator April Achter, who was at the meeting, clarified that the order will remain in effect until the CDC changes its guidance.

All school board members agreed that the mask mandate would have to be followed; penalties for non-compliance – a class 1 misdemeanor -- include a $25,000 fine against the school district for each occurrence. But board members spent time discussing the exceptions parents could use to avoid having their children wear masks in school.

Masks will be mandatory in Virginia schools under new health order

Superintendent of Schools David Jeck said that his staff was working to come up with an easy way for parents to declare an exception. He said parents would have about a week to make any declarations. He said that more information would be released to parents, he hoped, by the end of the day.

The order lists these exceptions to the mask mandate: 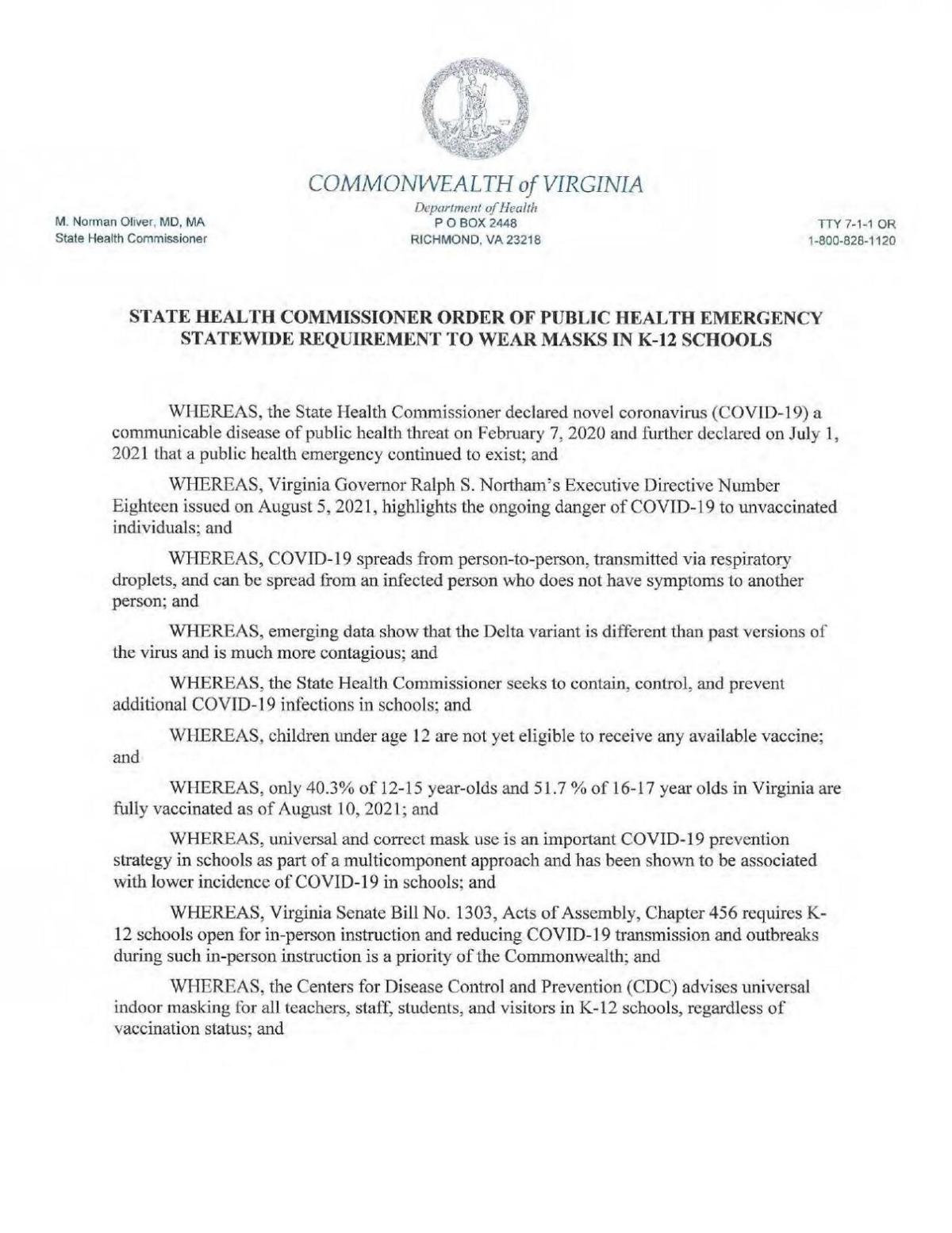 After these exemptions, the order continues, “Any person who declines to wear a mask because of a medical condition or any person with a sincerely held religious objection to wearing masks in school may request a reasonable accommodation.” It was this section of the order that meeting attendees seemed to feel offered a solution to their objection to masks. When this was read aloud at the meeting, cheering and stomping could be heard from outside the window of the meeting room and from upstairs in the overflow room.

Jeck said that Fauquier County parents would not be asked to define or defend their child’s medical or religious exemptions. He said the district won't require documentation or ask for proof of a medical condition or "sincerely held religious belief."

School Board Chair Donna Grove (Cedar Run District) said that school board attorneys agree that parents just have to request an exemption. “That’s all parents need to do.”

School Board member Susan Pauling (Center District) agreed, saying that she did not get elected to the school board to judge other people’s religious beliefs.

Details of the mandate

Pauling added that students would not have to wear masks while playing sports – either indoors or out -- because of the exception provided for exercising. 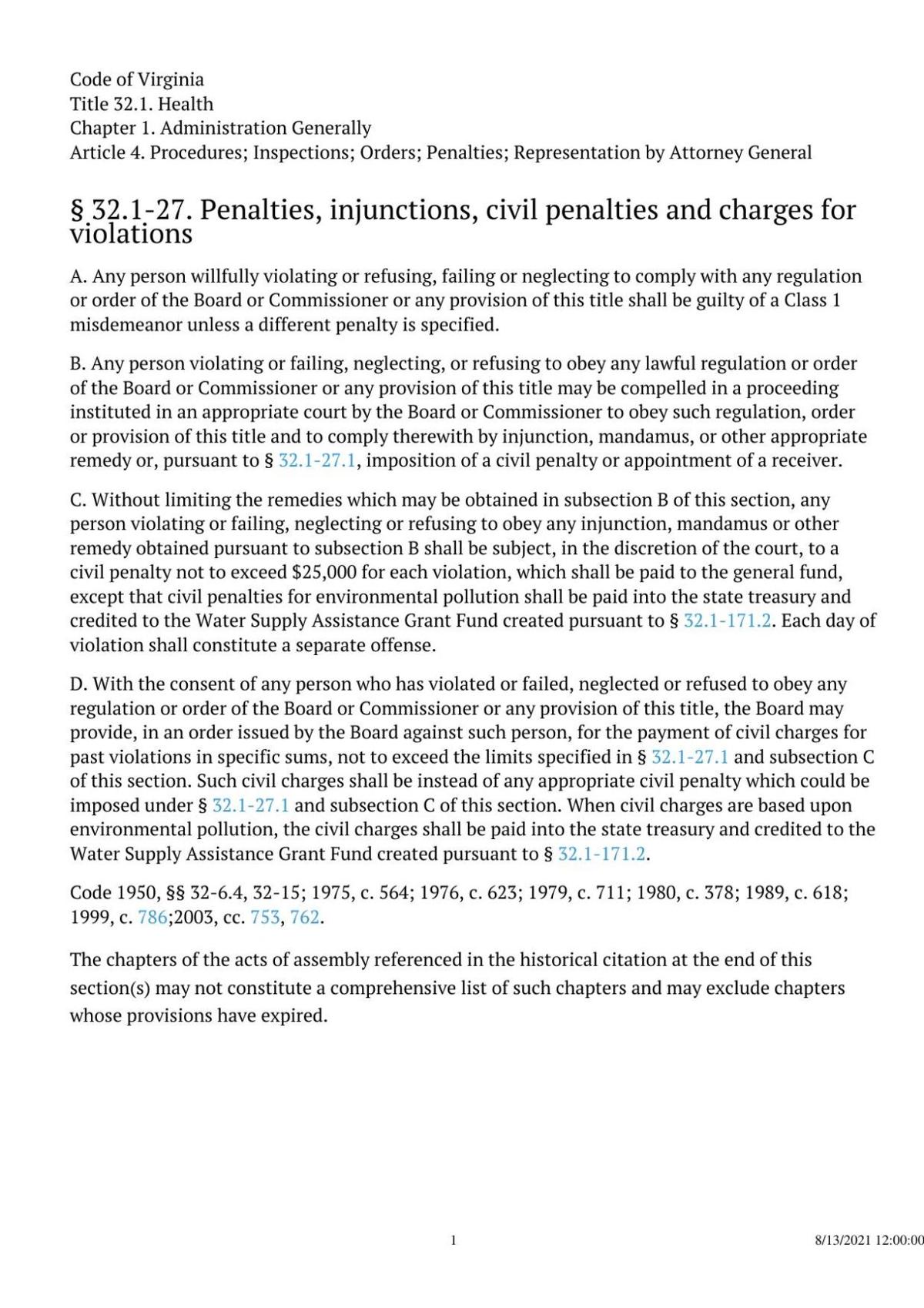 Achter pointed out that in the health department’s view, the danger of spreading COVID-19 comes not while children are playing on the field, but while they are huddled close together on the sidelines. She said it would be best if athletes could be kept distanced from one another during these times or wear masks.

When Pauling pointed out a silver lining of the mask mandate – that masked children who come in contact with a positive case of COVID-19 will not have to quarantine – Achter again stepped in to explain that kids would be able to avoid quarantines only if everyone in the classroom is wearing masks. Achter said, “Our number one goal is to keep kids from getting sick. Our number 2 goal is to keep bottoms in chairs [in classrooms]. This is what we need to do to achieve those two goals.”

It was clear throughout the meeting that school board members were unhappy that local control of COVID-19 mitigations had been taken away by the state. Pauling said, “Anytime I hear the word mandate, I think it’s an overreach,” whether it’s from the CDC, the state government or the school board.

School Board member Stephanie Litter-Reder (Lee District) read a prepared statement that she directed to the governor:

“This is not a one size fits all situation - the amount of contradictory data and studies (and in some cases, lack thereof) are overwhelming. There is a reason why our communities are distrustful - why they don’t think their government is being truthful or transparent. Pay attention to this study, but not that one, listen to this statistic, but ignore this one.

“You do not live in this community - you do not know the little boy with the hearing deficit that has been completely isolated for the last year and a half because he can’t see his classmate’s and teacher’s face and therefore cannot effectively communicate; you do not know the teacher that went against the medical advice of her doctor, putting her own pulmonary health at risk due to a mandate that didn’t take into account the fact that, while we do need to be concerned with the greater good, there are individual circumstances for each and every person; you do not know the students or staff that have suffered anxiety episodes attributed to the masks.

“Who are any of us to tell anybody ‘your anxiety doesn’t matter, it’s unimportant - it’s more important for you to make me feel safe?’

“You have forced our community to turn on each other with a vengeance -- neighbors and friends, judging each other over whether or not their concerns or mental health issues are ‘real.’

“We know these people, we talk and listen to every single person that comes to us in our local community -- all of whom have a right to an opinion and the right to voice their concerns.

“In addition - we followed the CDC guidelines throughout most of last year because that’s what we were told we had to do. The CDC handed us the rules that all but forced the virtualization of our schools last year -- and that has now been generally accepted as a terrible decision.

“Your heavy-handed shutdown of the entire state at the beginning of this pandemic likely did more damage than good -- but there’s no study to determine that, just the aftermath.

“These guidelines and mandates have taken the control completely out of the hands of the local governments -- the very governments who know their people and know their local issues. But we’re supposed to trust you got it right this time?”

Virginia schools heading back with mishmash of local mask policies

Before Monday’s meeting concluded, school board member Duke Bland (Marshall District) made an appeal to citizens that they use the opportunity to claim exceptions to the mask mandate carefully. He said, “I understand that parents have legitimate medical or religious exemptions… I’m pleading with the public not to use it illegitimately.”

The Fauquier County School Board sent a letter to parents on Aug. 22 pausing the option to opt-out of mask-wearing for medical or religious re…