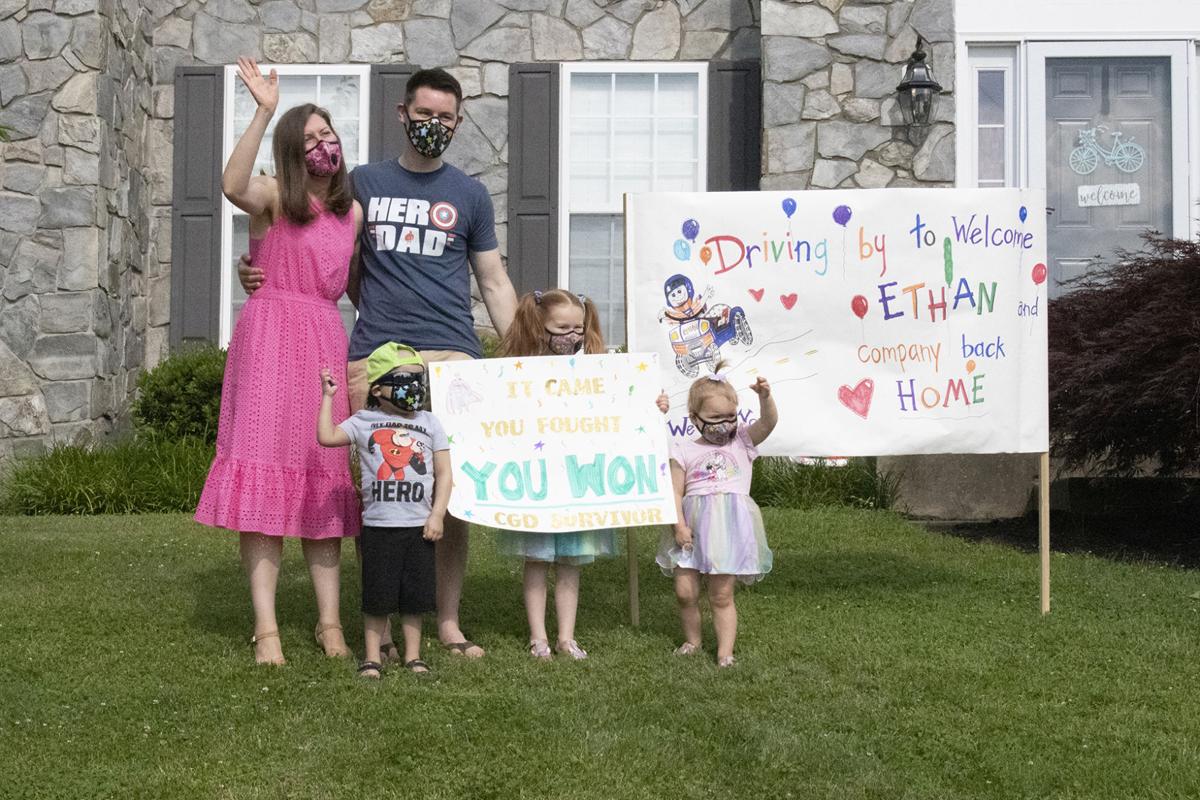 Ethan’s Russell’s (second from left) family – mom Sarah, dad Nate and Ethan’s two sisters Abby and Chloe -- thank all the folks who showed up to welcome him home. 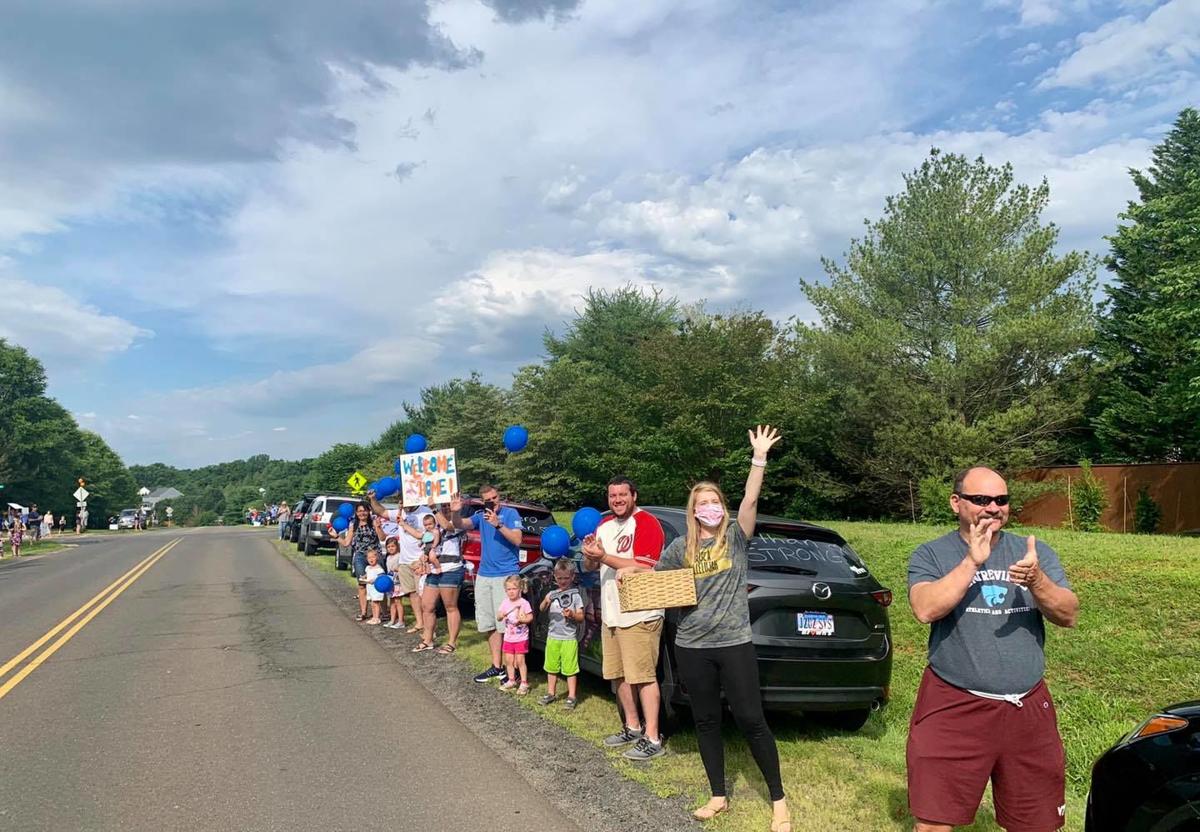 Notes of worship music drifted over the intersection of Warrenton’s Black Sweep Road and Timber Fence Parkway Saturday morning, as kids swatted at bubbles and darted about in the grass. Nearby, their parents stood together in clusters, the voices of some slightly muffled under masks.

A blip of sirens drew everyone into position along the roadway. Waving signs and cheering, the crowd greeted the caravan of police cars and fire trucks that escorted a red SUV down the street. Inside, 4-year-old Ethan Russell waved his little hand out the open window as he sat on his mom’s lap.

“Welcome home, Ethan!” the voice of one officer echoed from a police car’s speaker as the little boy’s friends and neighbors cheered.

For months, Ethan had played and slept in a room at the Children’s National Hospital in Washington, D.C. Since the first week of this month, he and his family have lived in a hotel room in the capital, close enough to the hospital that they can see it from their window.

It’s been quite a year for the little boy. Diagnosed with a rare immune deficiency disorder at 2, Ethan has undergone three bone marrow transplants since the start of 2020 — recovering from the last two as the coronavirus pandemic raged across the country.

But with lots of laughter and even more prayer, the Russell family says it pushed through months of uncertainty to a happy ending: Ethan’s final transplant was a success.

Through their journey, one worship song has become an anthem of sorts for the family. On Saturday, the song’s name, “Raise a Hallelujah,” adorned the shirts of many gathered to welcome Ethan home.

“Some of the words say, ‘I’m going to sing in the middle of the storm,’ and we did a lot of that,” said Ethan’s mom, Sarah Russell, in an interview before the homecoming. “That was our thing: Dancing in the rain.”

Ethan’s dad Nate Russell remembered that before Ethan’s diagnosis, he loved playing outside. He and his wife have photos of their son playing in the sandbox and helping to rake leaves in their backyard.

Now, when they look at these pictures, their hearts sink. “We had no idea that we were putting our son in life-threatening harm’s way, just as being a normal kid,” his mother said.

Ethan has chronic granulomatous disease, an immunodeficiency that results when white blood cells -- whose job is to fight off infections -- don’t function properly. People with CBD are more susceptible to bacterial and fungal infections and may develop a serious type of pneumonia after becoming exposed to dead leaves, mulch or hay.

Ethan and his family spent half of his short life not knowing he had CBD. But in August 2018, he wound up in the hospital with a severe bout of pneumonia after spending the weekend outside with his family, helping mulch the backyard and visiting the Fauquier County Fair, where he went on a hayride. It took doctors more than two weeks to come back with a diagnosis.

When they did, the boy’s life changed overnight. His mother said she felt like they were living in a science fiction movie. Ethan wasn’t allowed to play in the dirt or get anywhere near mulch or leaves. He had to be careful around plants and dust and could never jump in puddles.

“You name it: Everything that little boys love to do,” she said. We were looking at the doctors, thinking, ‘I can’t believe I’m hearing this. This is a nightmare.’”

But there was a silver lining: If Ethan received a bone marrow transplant, and it was successful, he’d be cured.

His parents were determined to get their son through a transplant. With the support of their relatives, employers and church family, the Russells charged ahead, not knowing it would take three tries.

To match bone marrow donors to patients, doctors look at their human leukocyte antigen tissue types — proteins found on most cells that immune systems use to recognize which cells belong and which do not. For a transplant to be successful, it’s important to have a close HLA match.

Although Ethan’s sisters were perfect matches for each other, neither had tissue that matched their brother’s. While his father’s tissue was a match, Ethan’s blood had a certain type of antibody that doctors said would almost certainly attack a transplant from his dad.

Ethan’s family turned to the bone marrow registry, where they found a relatively close match. About a month after Christmas of that year, Ethan began a 10-day chemotherapy regimen to prepare his body for the transplant. Then, all the family could do was wait.

“At that point, it’s an act of faith that the cells are going to get where they need to go,” Nate Russell said.

The first graft didn’t take. Doctors believed some of Ethan’s white blood cells had survived the chemotherapy to fight off the transplant. He’s a stubborn little boy, his mother said, right down to his cells.

The family began preparing for the second bone marrow transplant. At first, they were worried that the donor would decline to donate again — he had never even met them, after all. But their doctors told them that the young man had promptly agreed, without a second of hesitation.

The second transplant wasn’t successful either, but the Russells didn’t give up. Instead, with encouragement from their doctors, they decided to use Ethan’s father’s cells and prepared for a third transplant.

Of the community of CGD parents and patients the Russells knew, nobody had ever undergone a third transplant. In fact, they knew a few people who had died after a second transplant. Their doctors couldn’t offer them much comfort, either: More than one told them that there really wasn’t even any literature on trying for a third transplant.

“As parents, that was horrifying,” Sarah Russell remembered. “So, we fell on our faith. That was what we had. And we said, 'OK God, your plan, not ours.’”

This time around, in a process called “plasmapheresis,” doctors filtered Ethan’s blood so that no antibody remained that could fight off his dad’s donated cells — leaving him with effectively no immune system in the middle of a global pandemic.

It was March by this point, and the number of COVID-19 cases in Washington, D.C. were quickly rising. Outside of Ethan’s hospital room, nurses walked the halls, wearing what looked like Buzz Lightyear helmets. Later in the month, in an effort to tamp down on the spread of the disease, the hospital began limiting visitors to one per patient.

With that, Ethan’s mom went home to her two daughters.

Ethan made it to the date of his third transplant without getting sick and to the surprise and relief of his family, this one was successful. He was even discharged earlier than expected.

“My husband and I, at the end of the day, laughed a lot,” Sarah Russell said. “Three transplants. Global pandemic. Homeschooling. Allergies with our daughter — you name it. Shortage of toilet paper? Come on!”

Friday marked a big milestone for the Russell family: With 50 days since Ethan’s transplant, they’ll only have to wait 50 more until they’re allowed to go home for good.

Until then, they’ll have to spend most of their time within an hour’s drive of Children’s National, just in case.

After Saturday’s VIP escort and neighborhood welcome, the Russell family stepped onto their front lawn, beaming from beneath colorful masks. They would be headed back to D.C. at the end of the day. But for the moment, they were home.