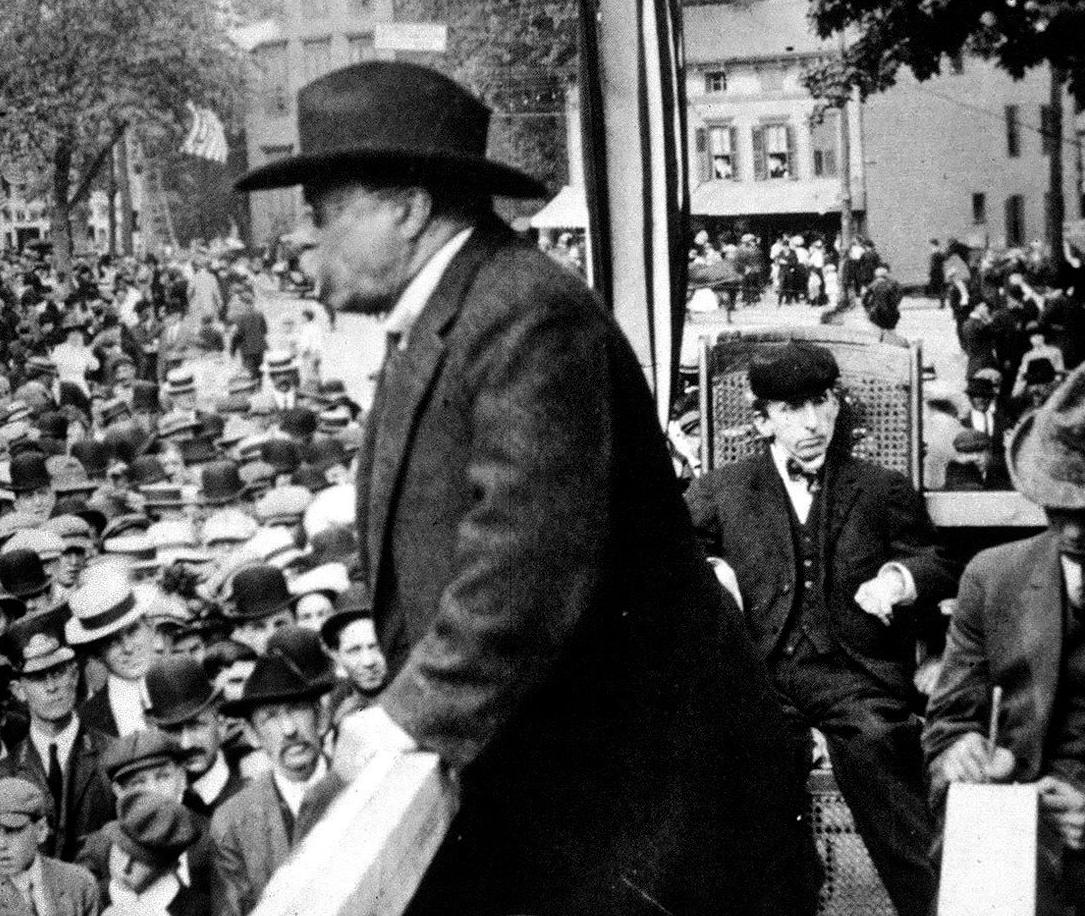 President Roosevelt addressed a crowd of about 1,000 people from the verandah of the Warren Green Hotel on Jan. 13, 1909. 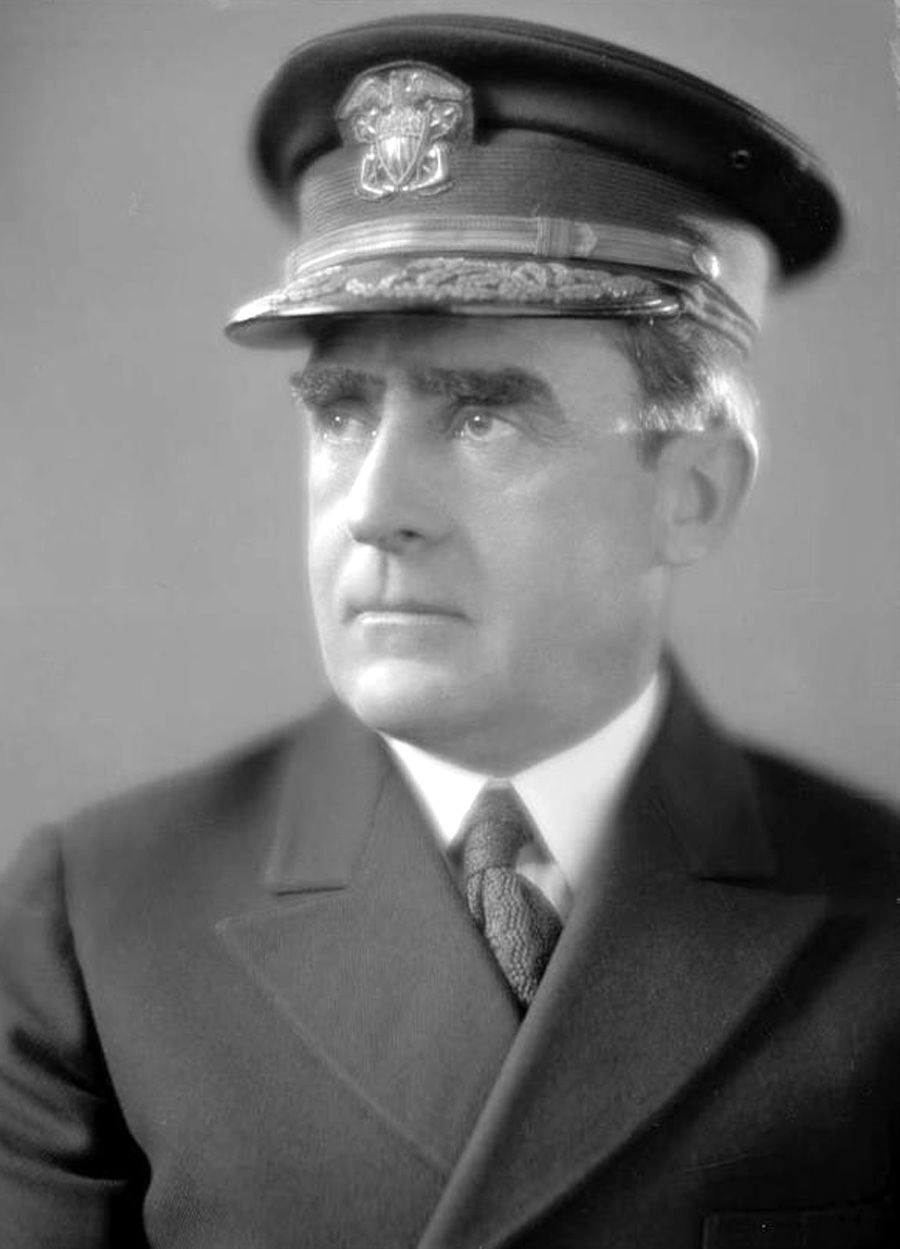 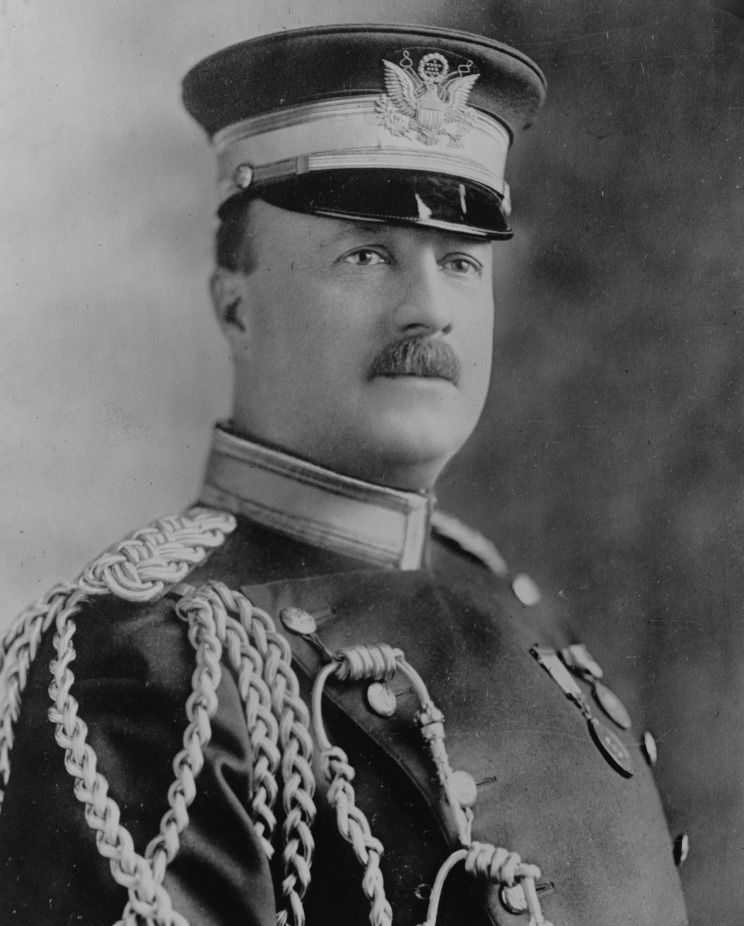 President Roosevelt addressed a crowd of about 1,000 people from the verandah of the Warren Green Hotel on Jan. 13, 1909.

Warrenton has enjoyed a few U.S. presidential visits over the years – the last being President-elect Bill Clinton’s pass through town on Jan. 20, 1993.

But perhaps the most memorable was over a century ago, President Theodore Roosevelt’s controversial ride from the White House to Warrenton and back on Jan. 13, 1909.

Universally remembered as courageous – as well as brash and outspoken – Roosevelt (1858-1919) was concerned about the physical condition of America’s army and naval officers. In order to shake things up, he issued General Order No. 6, requiring an annual physical fitness test for all officers with more than a year to retirement.

Basically, they had the choice of making an 80-mile horseback ride, a 100-mile bicycle ride or a 50-mile walk, to be completed in three days or less. What he considered to be a reasonable requirement started a firestorm of protest in both the ranks, and in the press.

Roosevelt felt the criticism was unjust, and to prove the validity of Order No. 6 – and show his officers that he wouldn’t ask them to do anything he couldn’t – he devised an ambitious challenge. He would travel more than 90 miles on horseback, in the middle of winter, in less than one day. The road between Washington, D.C. and Warrenton was the chosen route, estimated at 49 miles each way.

Roosevelt selected Warrenton because his long-time friendship with Commodore John Cropper Wise (1848-1922), who lived on Culpeper Street across from St. James’ Episcopal Church. Commodore Wise, a navy doctor, was serving on the USS Baltimore in 1898 during the Manila Bay Campaign, while Col. Roosevelt and his “Rough Riders” were taking San Juan Hill, Cuba.

Commodore Wise quietly arranged for a luncheon at the Warren Green on the appointed day, notified authorities and planned for the riders’ quick turn-around.

Roosevelt’s military aide, Capt. Archibald W. Butt (1865-1912), a Georgia native serving in the Army Quartermaster’s Corps, was charged with setting up the logistics for the ride. Accompanying the president and Capt. Butt would be Surgeon General of the Navy Adm. Presley M. Rixey (1852-1928), and Lt. Cary T. Grayson (1878-1938), the naval surgeon on the Mayflower, Roosevelt’s presidential yacht. Interestingly, both Rixey and Grayson were from Culpeper County, and were familiar with the route.

Jan. 13, 1909 was the chosen date, and Butt arranged for cavalry personnel from Fort Myer to set up relay points at Fairfax and Gainesville to pick up fresh mounts. The riders carried no provisions, other than the cold tea packed by Capt. Butt.

Because the ride was a secret, a few early problems emerged. Roosevelt had planned to start out on his personal mount, “Roswell,” and switch off to his second horse, “Georgia.” However, the personnel at Fort Myer were under the impression that the trip was only “a party of officers going on a day’s jaunt” not the real mission involved. As a result, Georgia was left in the stable, and average government-issued mounts brought to the relay stations.

The ride to Warrenton

The day of the journey began early. Roosevelt and Butt started with a breakfast of steak and eggs at 3:15 a.m. They were joined by Rixey and Grayson, who gave the president a cursory physical exam before the men departed from the White House at 3:45 a.m.

The weather was poor, and got worse. They crossed the Aqueduct Bridge into Virginia, heading into Falls Church, and made it to the first relay station at Fairfax by daybreak.  Finding that Georgia was not there, Roosevelt was disappointed, but was a good sport. “I am keenly disappointed, for I wanted Georgia to be on this ride for a matter of sentiment, if for nothing else,” he remarked.

In less than 10 minutes, the riders had changed saddles and bridles, remounted and were on their way to Centreville in freezing rain. Passing over Cub Run, they entered the Manassas Battlefield. The president noted the location, commenting that he was a Northerner, accompanied by his “three Rebels” from Virginia and Georgia.

Just east of Gainesville, they stopped at the second relay station for fresh horses. They had been dissatisfied with their first replacement mounts, and the ones at the second relay station were even worse. It was noted that the president’s horse seemed even rougher and slower, and Butt’s horse showed a streak of viciousness toward the other horses.

Passing through Buckland and New Baltimore, the riders reached Warrenton just as the town clock struck 11 a.m. They went directly to the Warren Green Hotel, where Mr. Wise had arranged for a luncheon of soup, roast beef and potatoes to be served. Their horses were kept in a nearby stable while they ate.

When the townspeople witnessed the arrival of the party, word spread quickly. The schools and some businesses were closed, and a large crowd gathered around the Warren Green to get a glimpse of the president. By the time the riders finished lunch, an estimated 1,000 people thronged outside.

Roosevelt had not planned a public presentation, but following a brief introduction by Mr. Wise, Roosevelt thanked the crowd for their warm welcome, and shook many hands before mounting up. All of this was done an hour and 10 minutes after their arrival.

The first part of the return journey was fairly uneventful. At the two relay stations, they remounted the same horses they had left there. By the time they reached Centreville, a freezing rain was falling, covering the roads, trees and riders with ice. They reached Fairfax by dark, and with the ice and poor visibility, travel became slow and dangerous.

Fearing an accident, Capt. Butt called the White House, requesting that the president’s carriage be brought to meet them at the Georgetown end of the Aqueduct Bridge. However, Roosevelt declined to dismount, and as they entered the city, they galloped through “the stretch.”

When he rode up to the White House portico at 8:30 p.m., Roosevelt and his companions were covered with mud and ice. Although he had spent about 17 hours in the saddle, Roosevelt claimed that he never felt better in his life. When asked about the ride, he replied with a smile, “It was bully!”

With this accomplishment, Roosevelt had amply proven his point. Members of a hunt club in Warrenton who had asked to accompany him on the return trip (an offer he declined) noted that the riders would have actually covered a total of 104 miles, not 98.

In a letter to his son Kermit Roosevelt dated Jan. 14, 1909, he described the journey, noting that in Warrenton, “…we lunched, and I had to shake hands with prominent citizens, say a word to the school children, &c.”

In appreciation for the hospitality shown by the people of Warrenton during his visit, Roosevelt presented the town with a monochrome print of his portrait done in 1908 by artist Gari Melchers. He added a brief account of the journey, and signed it. The print hangs today in the Virginiana Room of the Main Fauquier County Public Library.

Although Roosevelt had proven his point “…as far as the grumblers in the army and navy about my physical exercise order,” were concerned, he knew that his battles with Congress would continue over the final weeks of his second term. “Congress feels that I will never again have to be reckoned with, and that it is safe to be ugly with me,” he wrote to his son Kermit. “I am not having an easy time, and I shall have fights over certain veto messages I shall send.”

Roosevelt left office on March 4, 1909, when President William Howard Taft took office. He continued to be a force in U.S. politics as a  Republican and later in the Progressive (“Bull Moose”) Party until retiring in 1916. He died on Jan. 6, 1919.

Capt. Archibald Butt died April 15, 1912 in the sinking of the RMS Titanic. His heroic actions during the disaster are legendary; his body was never recovered.

Lt. Cary Grayson continued his connection with the White House, serving as the naval surgeon on board the Mayflower during the administration of President Taft. Later, he was appointed President Woodrow Wilson’s White House physician and served as his personal aide. He was promoted to the rank of rear admiral in 1916, and retired from the Navy in 1928.

In 1935, Grayson moved to a new home on Blue Ridge Farm, near Upperville, and from 1935 until his death in 1938, he was the chairman of the American Red Cross.

Adm. Presley M. Rixey, who is also remembered as the founder of the U.S. Navy Nurse Corps, retired in 1910, but continued to serve on the Naval Examining Board. He died on June 17, 1928.