The Virginia Department of Forestry is raising concerns about the impact on forestland in western Prince William County that could occur under a proposal to allow new data centers on about 2,000 acres near the Manassas Battlefield National Park. 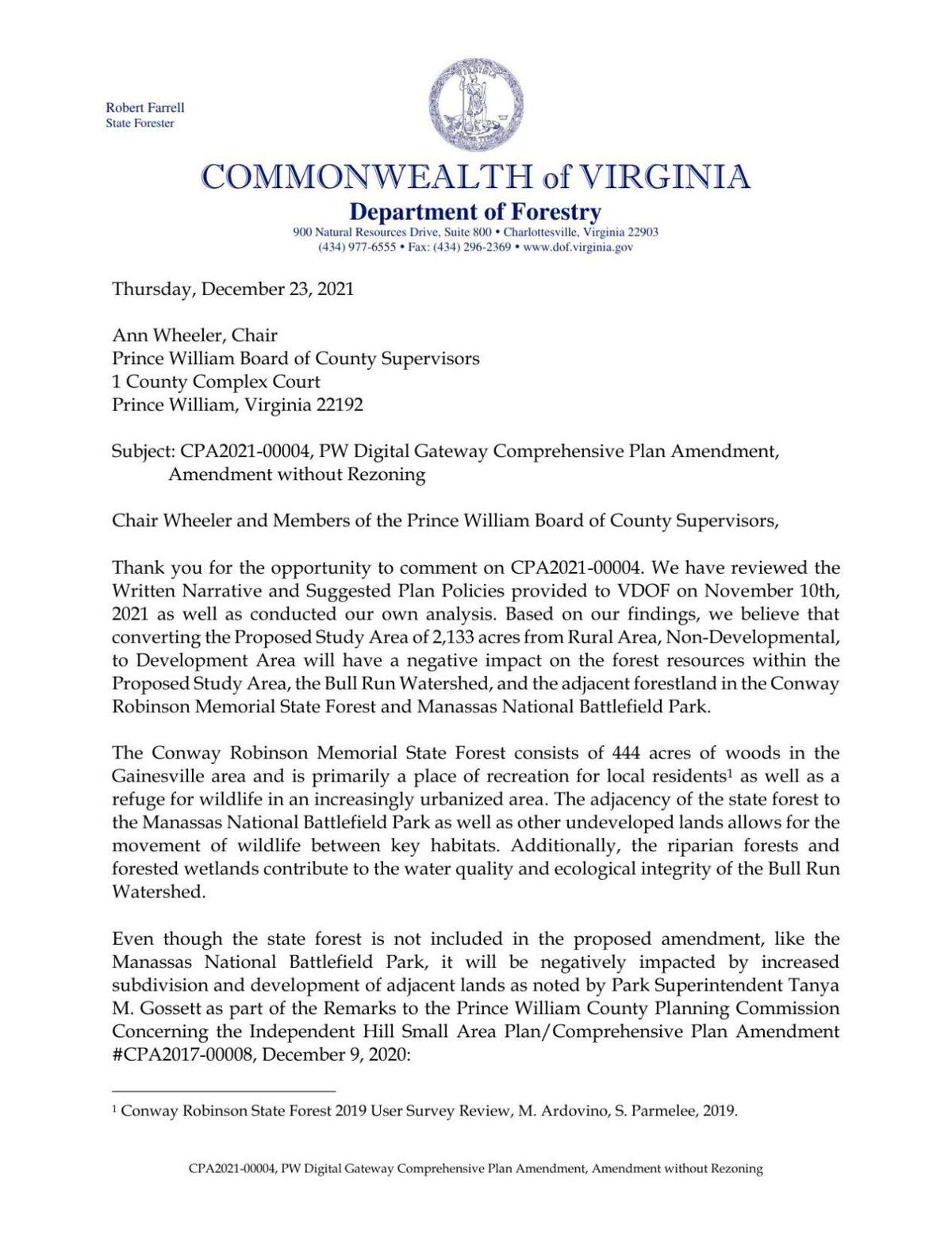 Forestry officials said they believe the plan will have “a negative impact” on forest resources in the area and adjacent forestland at Conway Robinson Memorial State Forest and Manassas National Battlefield Park, according to a Dec. 23 letter sent to Prince William Board of County Supervisors Chair Ann Wheeler (D).

Virginia Forestland Conservation Coordinator Sarah Parmelee wrote that the proposal does not describe how the plan will “avoid or mitigate the potential loss of key ecosystem services” and failed to put forth any plans “to protect existing forest, establish new forest, or replace forest lost through construction.”

Forestry officials are recommending that the landowners behind the "PW Digital Gateway" proposal describe in detail how they will avoid or minimize impacts to forest resources and the local ecosystem, including within the state forest and national battlefield, and how developers will mitigate impacts through conservation and reforestation.

“We encourage the adoption of open-space land conservation practices such as conservation easements to merge smaller parcels within the rural area and increased afforestation on unused agricultural land,” Parmelee said.

The letter follows a Dec. 3 letter from the superintendent of Manassas Battlefield National Park that called the proposed data centers the "single greatest threat to the park in decades."

“... The development of existing data centers has demonstrated that extensive mass grading and the nearly wholesale clearing and flattening of large parcels is the norm,” Eib wrote.

If it’s approved, the PW Digital Gateway will be among the most significant land-use changes in Prince William County in more than two decades. It would remove 2,133 acres of agriculturally zoned land from the county’s “rural crescent,” where development is generally limited to one home per 10 acres and where access to public sewer lines is restricted.

The applicants for the plan are dozens of homeowners who live near Manassas National Battlefield Park who want to sell their homes to allow for data center uses. They claim the area has lost its rural agricultural character because of nearby development encroachment, increased traffic and a massive Dominion Energy transmission line nearby that was constructed in 2008.

The Prince William County planning office is hosting a community meeting about the proposal on Thursday, Jan. 27 at Beacon Hall Conference Center on the GMU Manassas campus.

Prince William County’s planning office will host two in-person, community meetings later this month on proposals to replan about 2,000 acres near the Manassas Battlefield National Park for data centers and to expand the county’s existing “data center overlay district” to make more room for the giant buildings around the county.

Prince William County’s environmental officials are recommending that board of county supervisors deny a request to replan 2,133-acres in the rural crescent for data centers because of the risks the development poses to nearby forests, streams and wildlife.