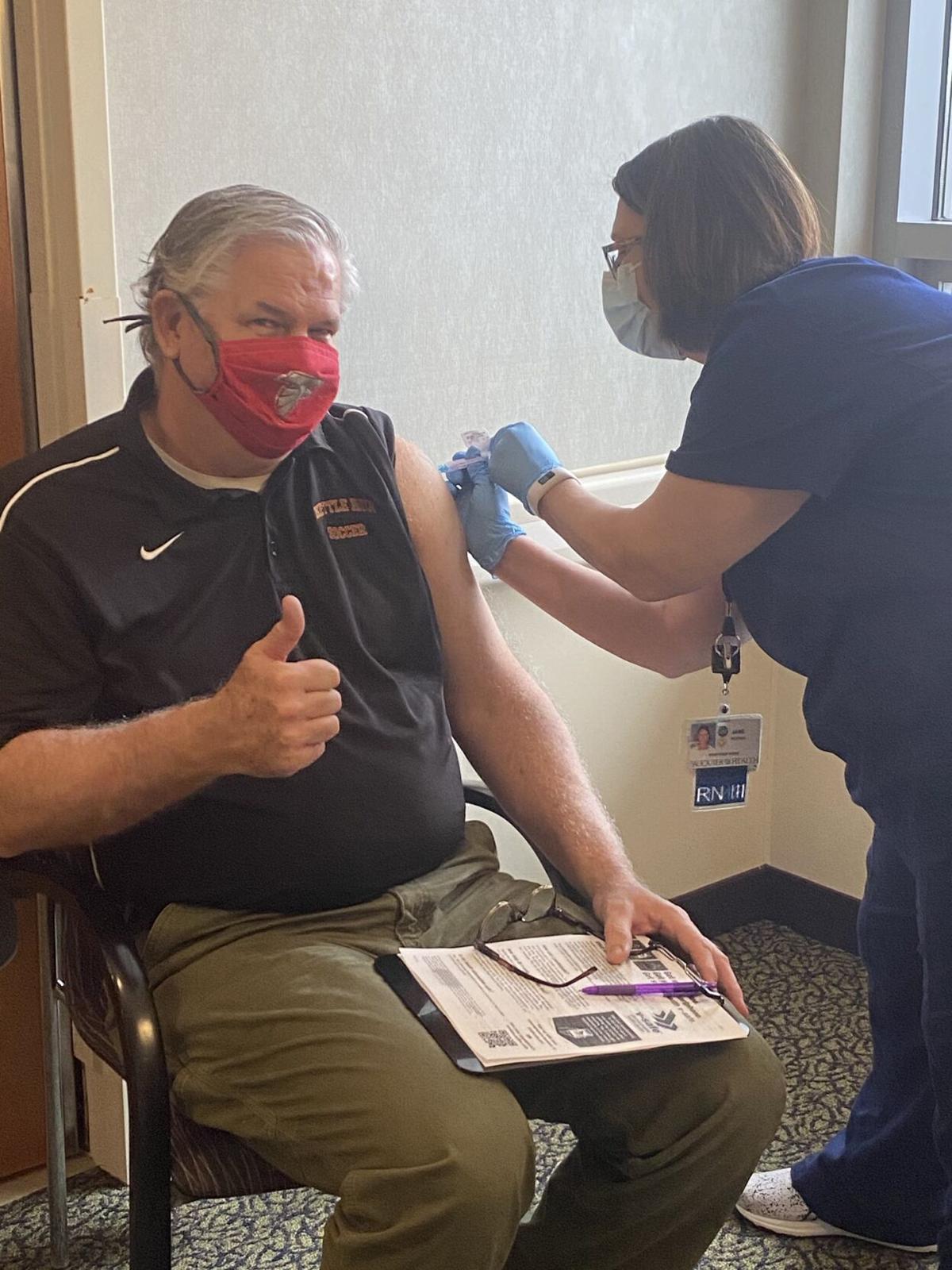 In an undated photo, a Fauquier Health employee administers a COVID-19 vaccine to Superintendent of Schools David Jeck. 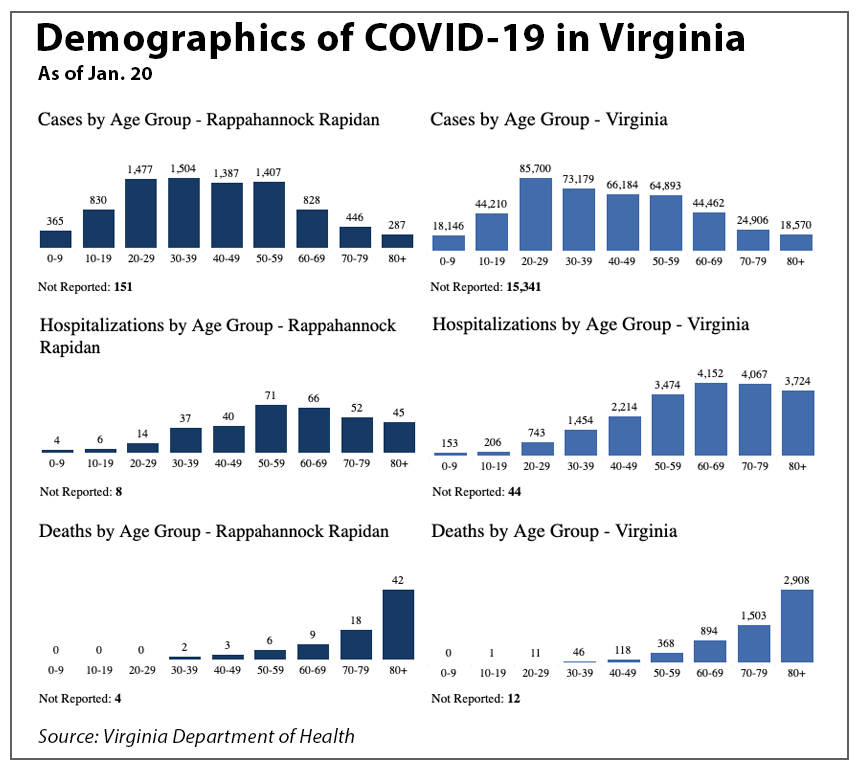 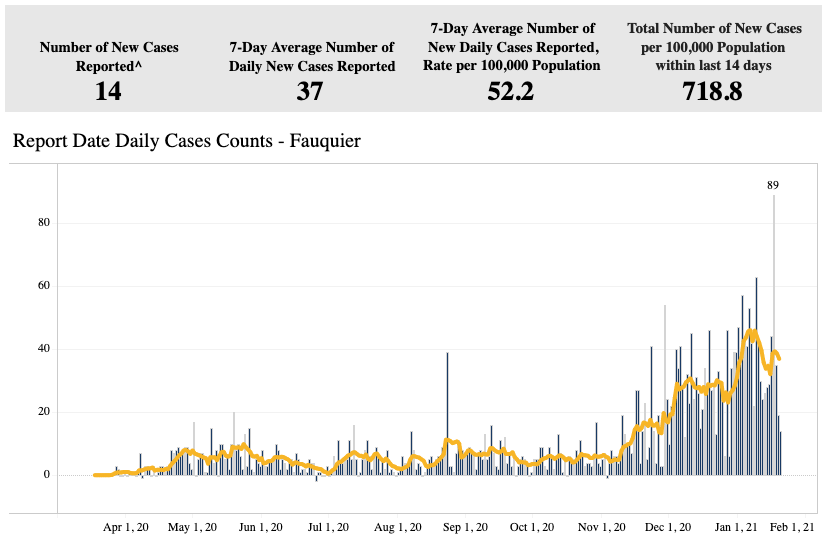 A chart shows the number of COVID-19 cases among Fauquier County residents by date reported. 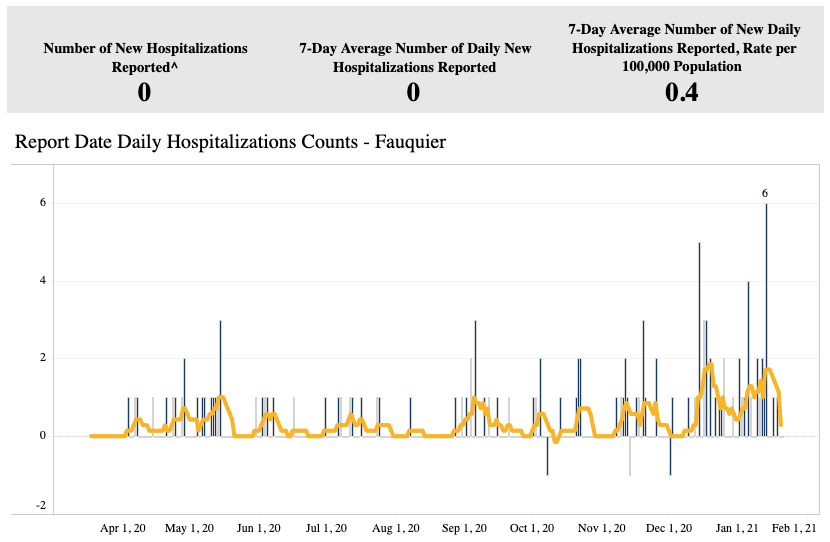 A chart shows the number of COVID-19 hospitalizations among Fauquier County residents by date reported.

Of the more than 1,900 people employed permanently by the Fauquier County School Division, more than 1,500 indicated in a recent survey they want to receive a COVID-19 vaccine, the school division announced Wednesday. Teachers and other school staff members are part of the Phase 1b eligibility group in Virginia.

The Wednesday press release from the school division said “hundreds” of school employees had already received one dose of the vaccine and “hundreds” more have appointments to receive the shot.

In response to a request for clarification, Tara Helkowski, the school division’s public information officer, said school officials did not know how many employees had received the vaccine or how many had appointments. “All we have is the number of employees who responded [in the survey] they would like to get the vaccine,” she said.

School nurses received vaccinations as part of Phase 1a; the first time a Phase 1b employee received a vaccination was Jan. 13, meaning no Phase 1b school staffer will be fully inoculated – with both necessary doses -- until at least either Feb. 3 or Feb. 10, depending on which vaccine was administered.

The Rappahannock-Rapidan Health District, the division of the Virginia Department of Health that includes Fauquier, Culpeper, Rappahannock, Madison and Orange counties, has administered most of the vaccinations in Phase 1b so far. Most inoculations of school employees have taken place at a central health district vaccination clinic in Culpeper. Additionally, 164 county employees – including some school division staffers – were vaccinated at Fauquier Hospital this week.

Wednesday’s press release quotes Superintendent of Schools David Jeck as saying the health department’s efforts have been “nothing short of miraculous.”

At a meeting of the Fauquier County School Board last month, two health department epidemiologists told board members that there is little evidence that local schools have been a major contributor to the community spread of the novel coronavirus, and no outbreaks have been reported during the school division’s current “hybrid” instruction model.

But, they said, health department staffing levels are insufficient to effectively perform the necessary contract tracing in educational settings to determine for certain the role local schools have played in spreading the virus.

Regardless of what exactly are the driving forces behind community transmission, the data shows that the virus is spreading more widely this month than at any other point during the pandemic.

Cases have been spread relatively evenly across age groups since the pandemic began, with the largest share of cases by far having been confirmed in Virginia residents in their 20s.

The oldest demographic has been most vulnerable to dying from the disease, with 2,908 of the 5,861 COVID-related deaths in Virginia occurring in those 80 years old or older.

400 vaccines administered to Phase 1b residents at Fauquier Hospital Monday

In normal times, Fauquier Hospital’s Bistro on the Hill at midday would be packed from a lunchtime rush; since the pandemic began, though, din…

For those who have been able to get a COVID-19 vaccination appointment in the local area, the experience has been mostly positive, but not eve…

When school buildings open back up on March 15 for four-day-a-week, in-person learning, students in pre-kindergarten to second grade will prob…