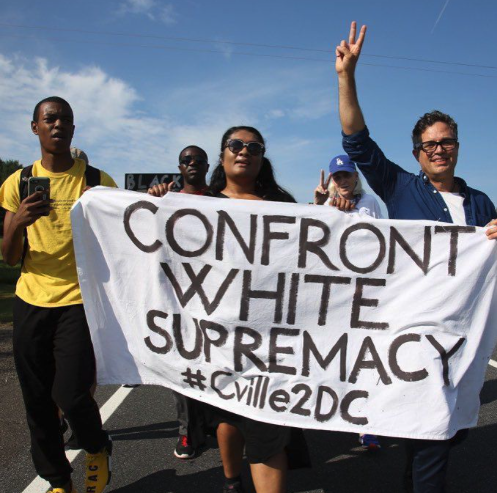 Actor Mark Ruffalo joins participants in the March to Confront White Supremacy on Thursday as the group makes its way through Culpeper County. 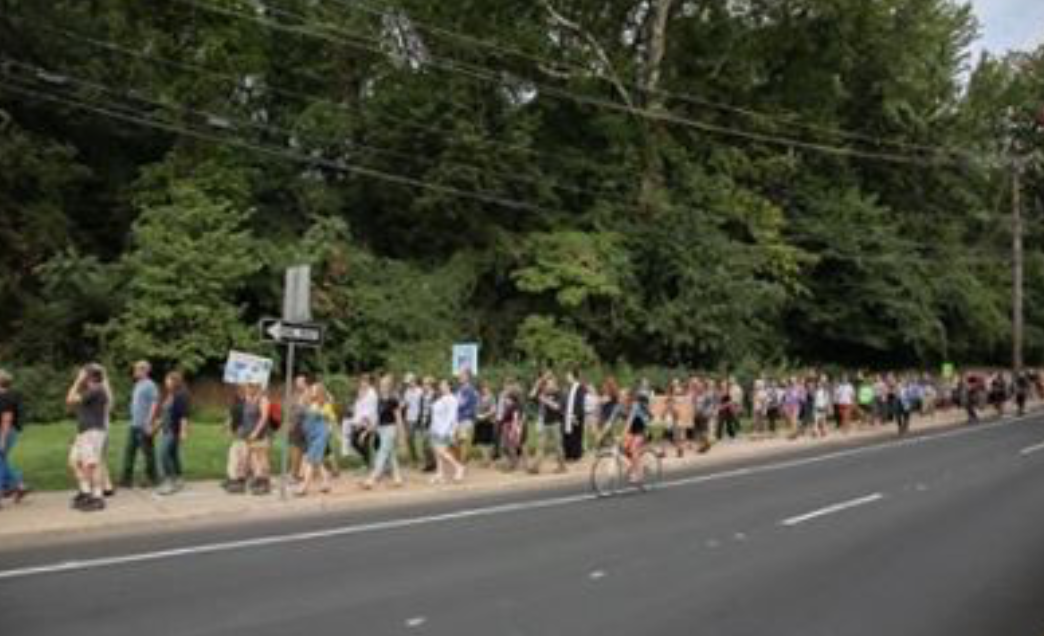 Actor Mark Ruffalo joins participants in the March to Confront White Supremacy on Thursday as the group makes its way through Culpeper County.

An armed man allegedly made threatening statements to March to Confront White Supremacy participants, briefly halting the group's trek on Wednesday, according to organizers.

The man reportedly threatened to wait for the marchers with a gun at the McDonalds along U.S. 29 in Madison County, group organizers announced Thursday morning. They said they decided to temporarily halt the march because of the threat. But the group is still making its way to D.C., with plans of reaching Remington on Friday before they make their way to Gainesville this weekend.

“We will continue marching tomorrow and the next day, until we reach Washington D.C. to deliver our demands at the Capitol,” march organizers said in a prepared statement. “This threat is a clear example of why we need more people to stand with us in this fight against white supremacy and hatred. We’re always more powerful united than divided.”

Corrinne Geller, public relations director for the Virginia State Police, said there were no direct threats made against the marchers or any violation of the law.

"There was an individual who was in the vicinity of the marchers with a legal, open carry firearm on his person," Geller said. "Local and state law enforcement personnel were aware of his presence."

Police suggested the marchers conclude their journey for the day Wednesday afternoon after the incident, Geller said.

"The marchers were less than a mile from their prescheduled stopping point at the time the march was concluded Wednesday afternoon," she said.

“At the time the statements were made, he was carrying a firearm,” Weaver said. “The situation was handled by law enforcement.”

The march was initiated as a response to violence and an alleged murder at a white supremacist rally in Charlottesville earlier this month.

The planned 118 mile march began at Emancipation Park in Charlottesville on Monday and is scheduled to end in D.C. on Sept. 6.

The purpose of the march, according to its website, is to “demand the removal from office all officials who enable white supremacy, including President Trump.”

Marchers are also calling for the removal of all Confederate symbols and for charges to be dropped against people arrested for protesting white supremacists in Charlottesville, among other demands.

“I’m marching today in memory of Heather Heyer, the young woman who lost her life to the hate of white supremacists in Charlottesville, as well as many others who were injured,” Ruffalo said in a prepared statement. “I’m also marching because a central demand of this march is for Donald Trump to be removed from office following his statement supporting white supremacists and neo-Nazis.”

The ongoing March to Confront White Supremacy ended earlier than expected today when a 4-mile back up on U.S. 29 prompted the Virginia State P…

Snopes used to be a good source, but not now. They were bought out. Funny people are giving the owner money while he is on an extended honeymoon in Asia with his new wife, funded by Snopes. As smart people are learning to no longer trust anyone or anything from California. And please quit sullying this fine site by labeling anyone that disagrees with you a bigot.

Yep, the guy who claimed to be a white supremacist that arranged the Charlottesville rally also was the one who organized Occupy Wall Street. He was a devout Obama supporter who suddenly changed sides. This whole mess smells of a setup.

Why sully this fine publication in our good community with lying fake news? Your nose is not lying -- the setup is yours.

In fact, Jason Kessler is an associate committee member of the Greene County Republican Party.

Why debate the issue when fact-checking is handy:

Nice try, but your dog don't hunt in our woods.

Snopes is run by a liberal husband and wife team from California. They also are reported to receive funding from George Soros. It has been proven they put a liberal slant on their "rulings".

Fake news atop fake news. When will you wake up? Not a team, no longer married. Reported to receive Soros funding? Prove it, and what would be wrong if it were true (though there is no evidence it is). Soros is an American Jew driven out of his home in Hungary by fascists. He hates fascists, as do all good people, and there is no "proof" there is a liberal slant, only your lame claim.

Indeed, you attack the source and not the facts related therein. Why? Because they are facts and you purvey fake news in your defense of fascists. Again, stop sullying our good community with hatred. This is a great place and you are a bigot.

Husband and wife? Soros funding? You lie. It's fake news:

Or is the Murdoch-owned NYPost somehow biased too?

And interesting to note that the March was organized by New Yorkers and their number has been dwindling.

Mark Ruffalo just proved he is just another Hollywood elitist who needs to do some homework on what really happened in Charlottesville. How come they aren't marching to the State Capitol to ask the governor why he didn't take appropriate precautions to prevent the violence or keep vehicles off of the streets occupied by pedestrians. Or how come he declared an emergency and gave the police a stand down so the press could get good coverage of the violence instead of stopping it. How come there is no talk of violent Antifa protestors being allowed in?

The best thing people can do is just ignore the marchers. They want people to confront them for press coverage. Amazing a bunch of Veterans just did this same walk with almost no press coverage.

Better you should ask good Republicans like Mitt Romney, John Danforth, Gary Cohn, Rex Tillerson and more why they disagree with you.

No evidence of a stand down order -- just your unsubstantiated assertion -- but I'll offer one of my own: Where was DHS? The FBI? The state/local authorities tried to cancel the event when DHS warned it would turn violent (Exact warning: "One 'probable' white supremacist has posted an online 'call to arms' saying 'antifa must be destroyed.'") And they wanted the groups better separated, but again the federal judge dictated the location.

Since it was a federal judge who ordered the event held over state/local objection, and since the DHS warned it would turn violent, and because federal rights to free speech were asserted, where were they?

Who ordered the feds to stand down?

WE know that the Mayor ordered the stand down and who moved the protestors together to cause the conflict. McAuliffe is just as guilty by not using the National Guard to prevent the hate groups BLM and Antifa from being in the state

Do some research. The feds can't come into a state without a request from the governor. Watch the governor's press conferences on Thursday and Saturday. Completely different approach.
I had a friend there on a security assignment to protect a news reporter because the news got a tip it would be newsworthy but she needed protection. He was right there when they marched one group right into the other. Said it was completely preventable, but the stand down order came out and the police backed up.
We're you there?

I tried to post a history piece on Antifa, but this site won't allow it for some reason. The bottom line is it was formed as the strong arm of the German Communist party. After WWII they continued in East Berlin until even the Stalinists realized how bad they were and locked them up. Look up the Tinley Park 5 to see how their violence continues in the US.

The rally is a joke. Last update had only 35 protestors

You would think that the Fauquier Times would have included the number of marchers in the article. If there are only 35, that explains why they didn't.

I am a vet 30+ years and now retired. You seem to have a problem with facts. Hitler was a socialist the EXACT same party that Obama was a card carrying member. So please spare me your fake agitations