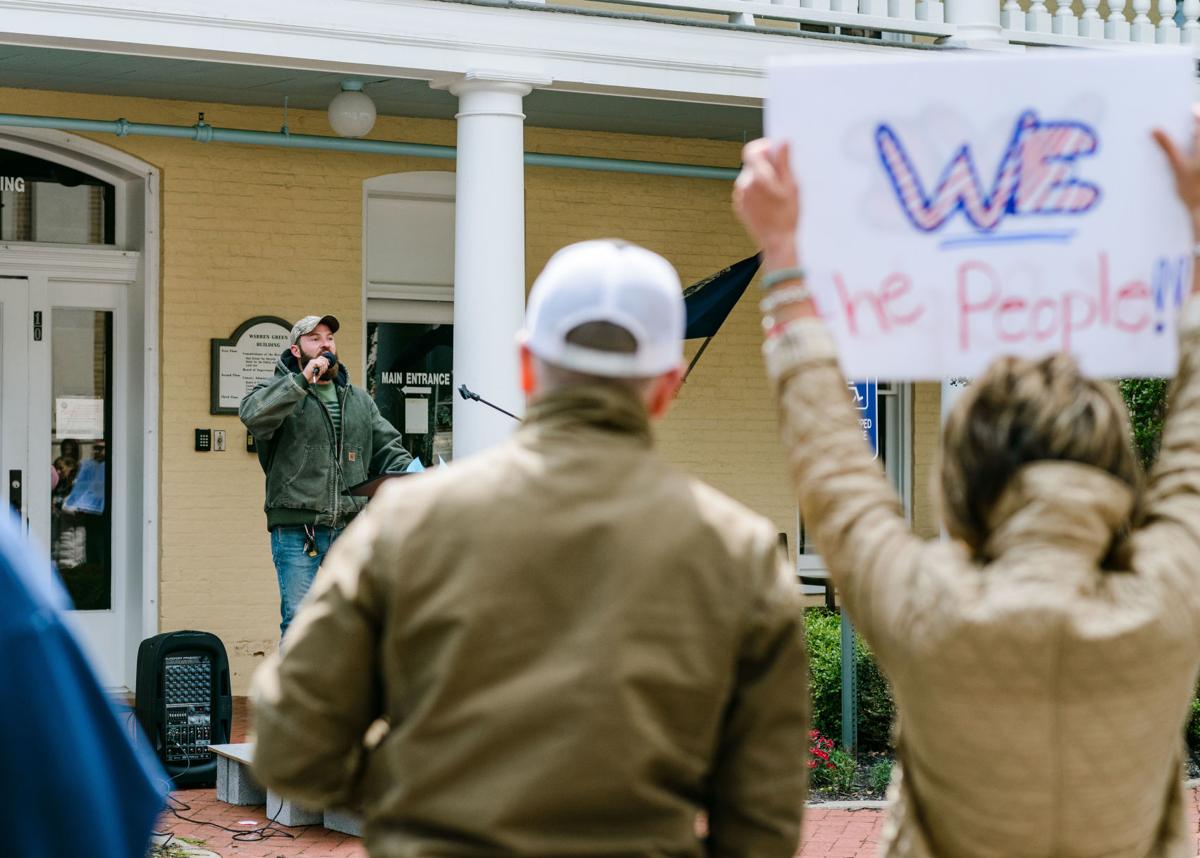 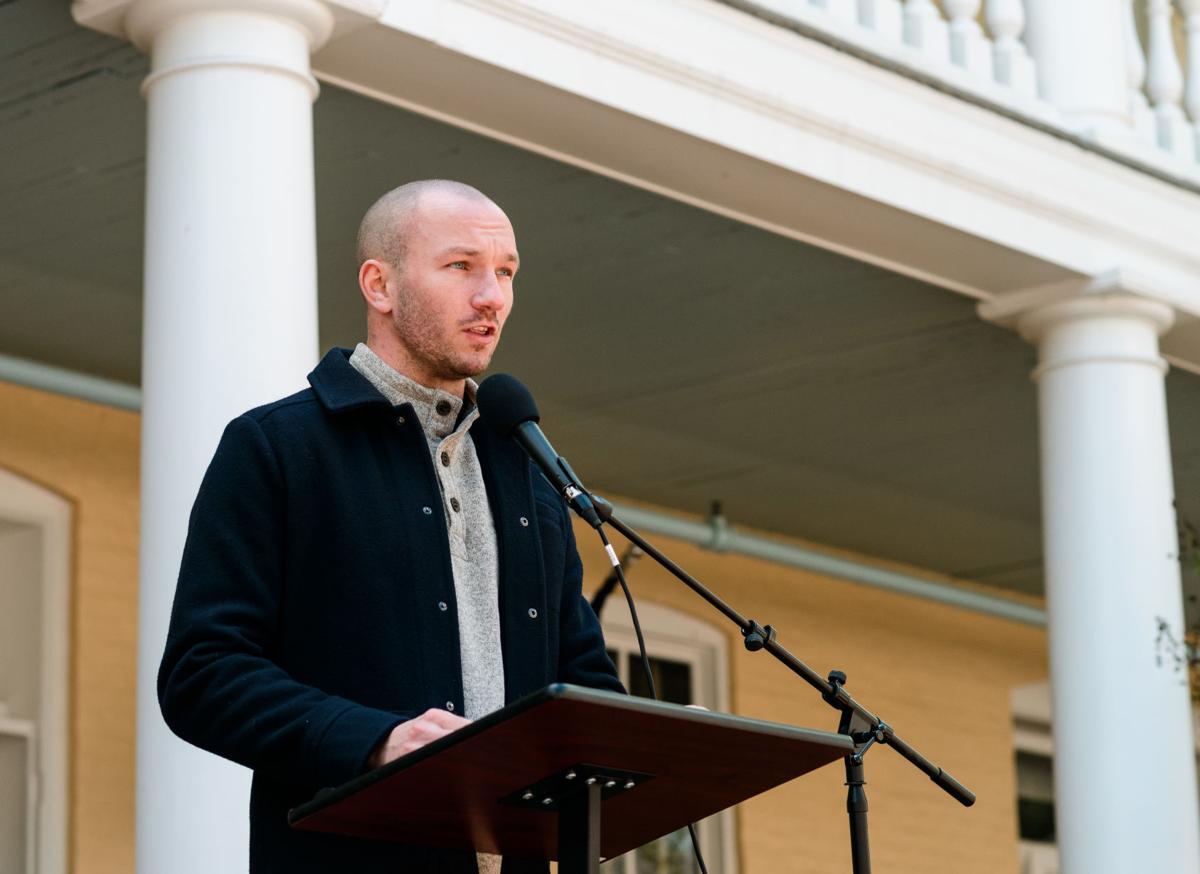 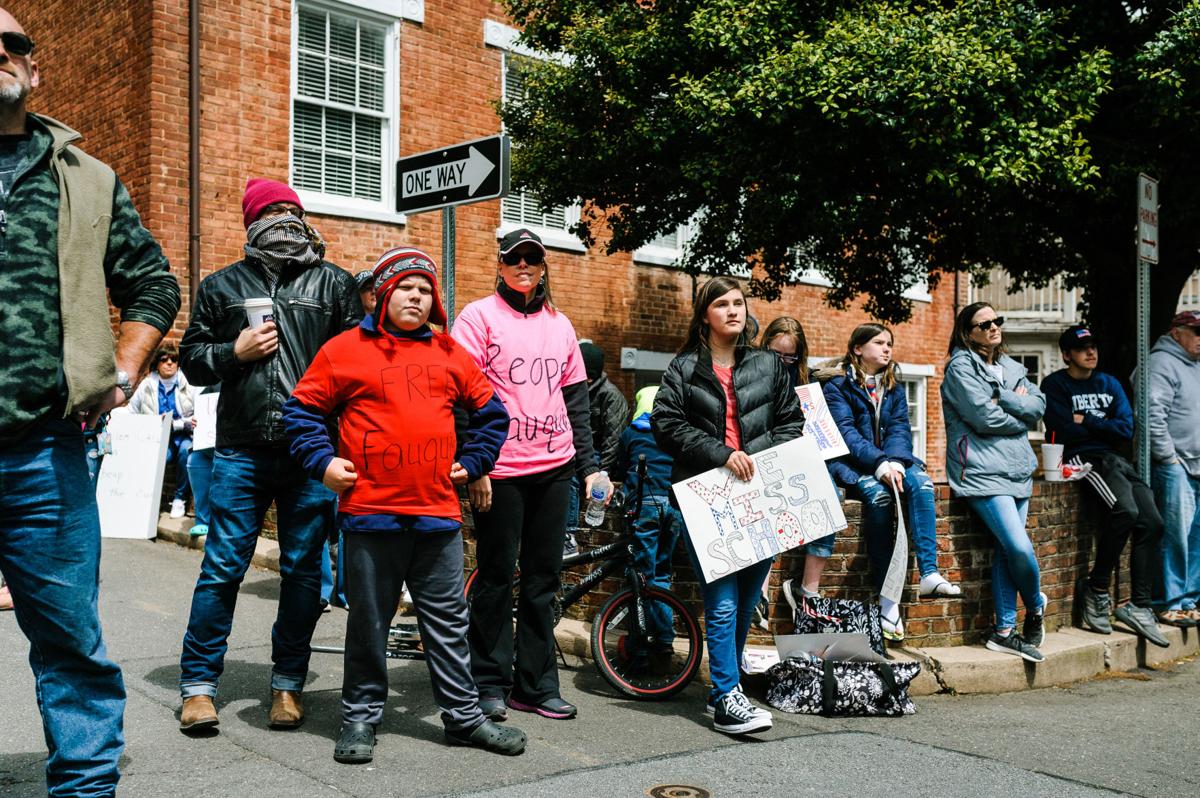 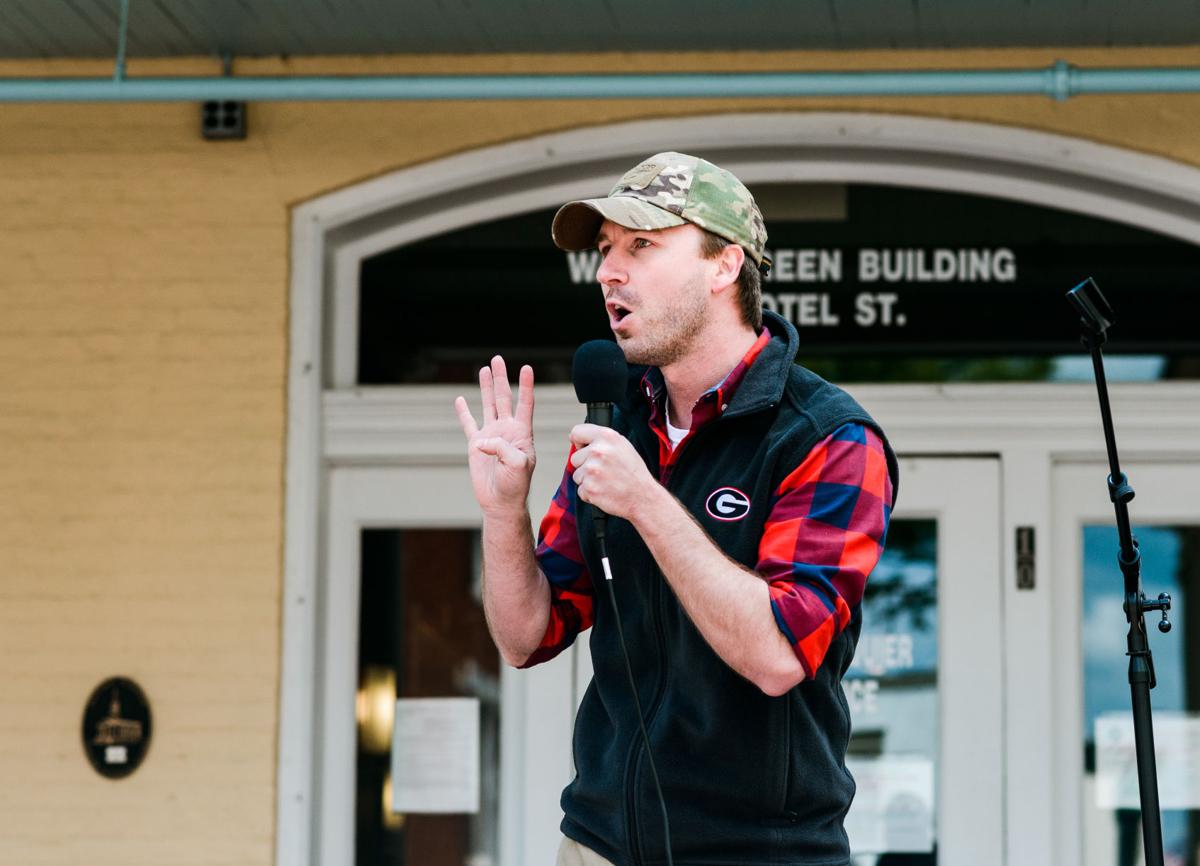 Lance Allen addresses the crowd during the rally. 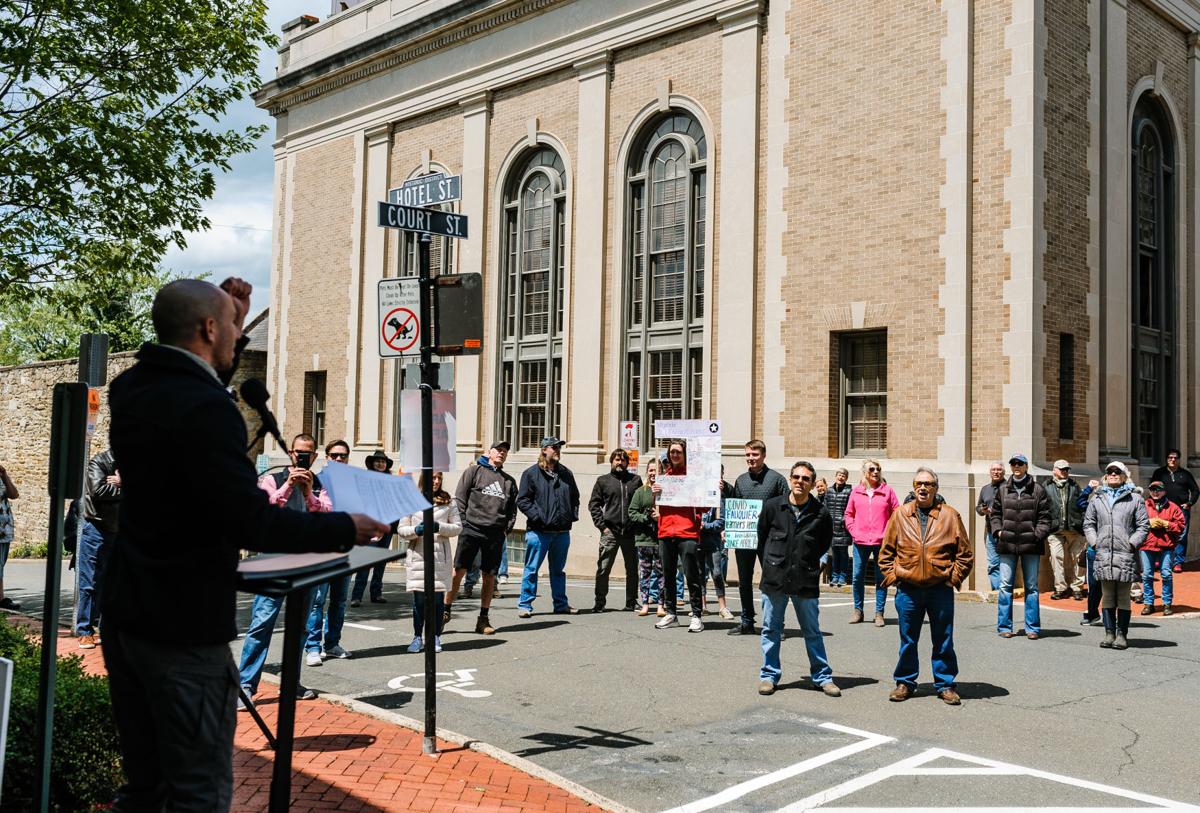 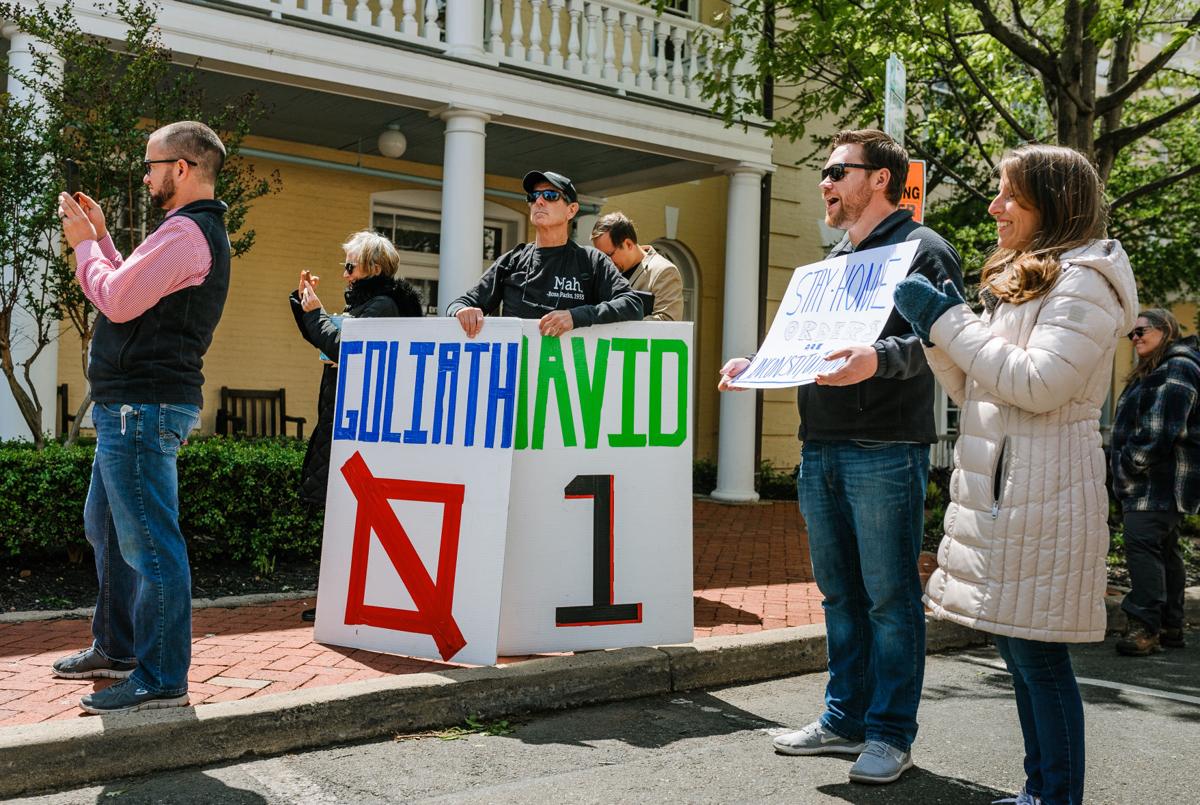 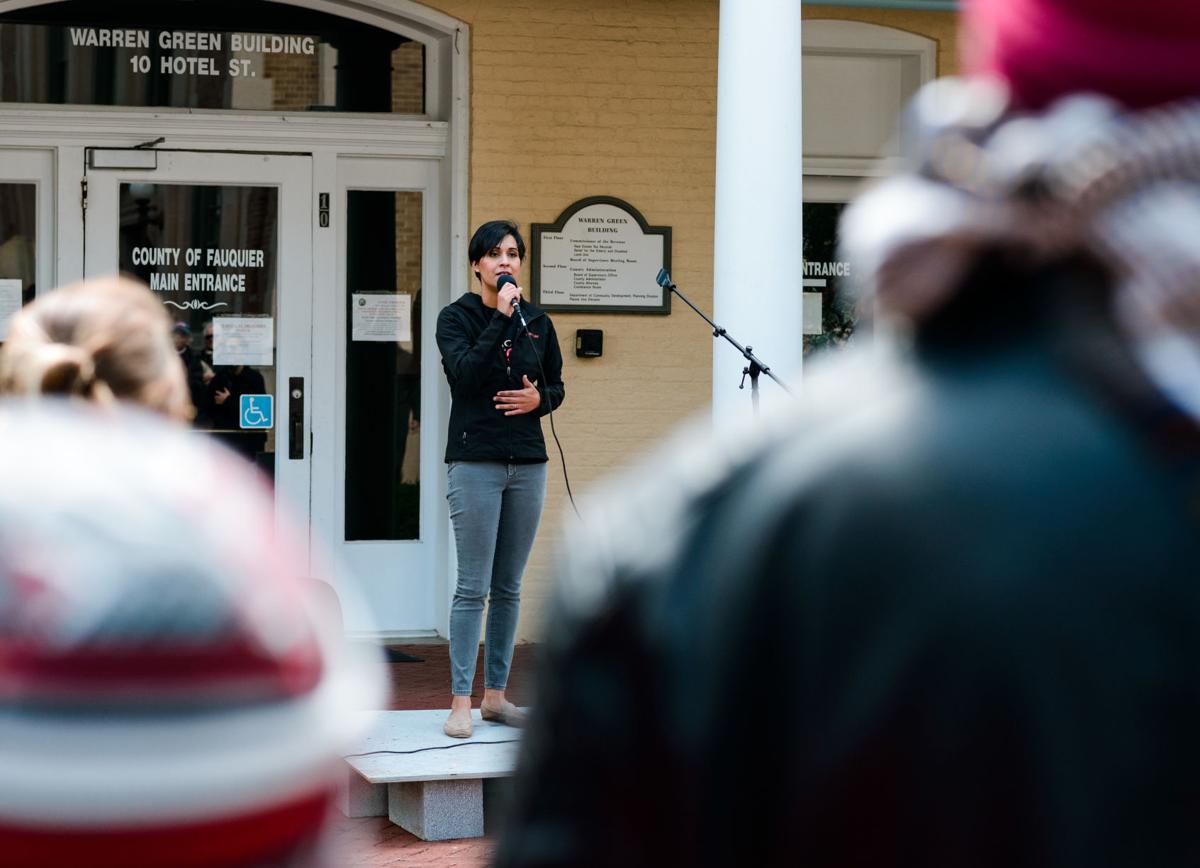 Dolly Jones sings the National Anthem before the start of the event. 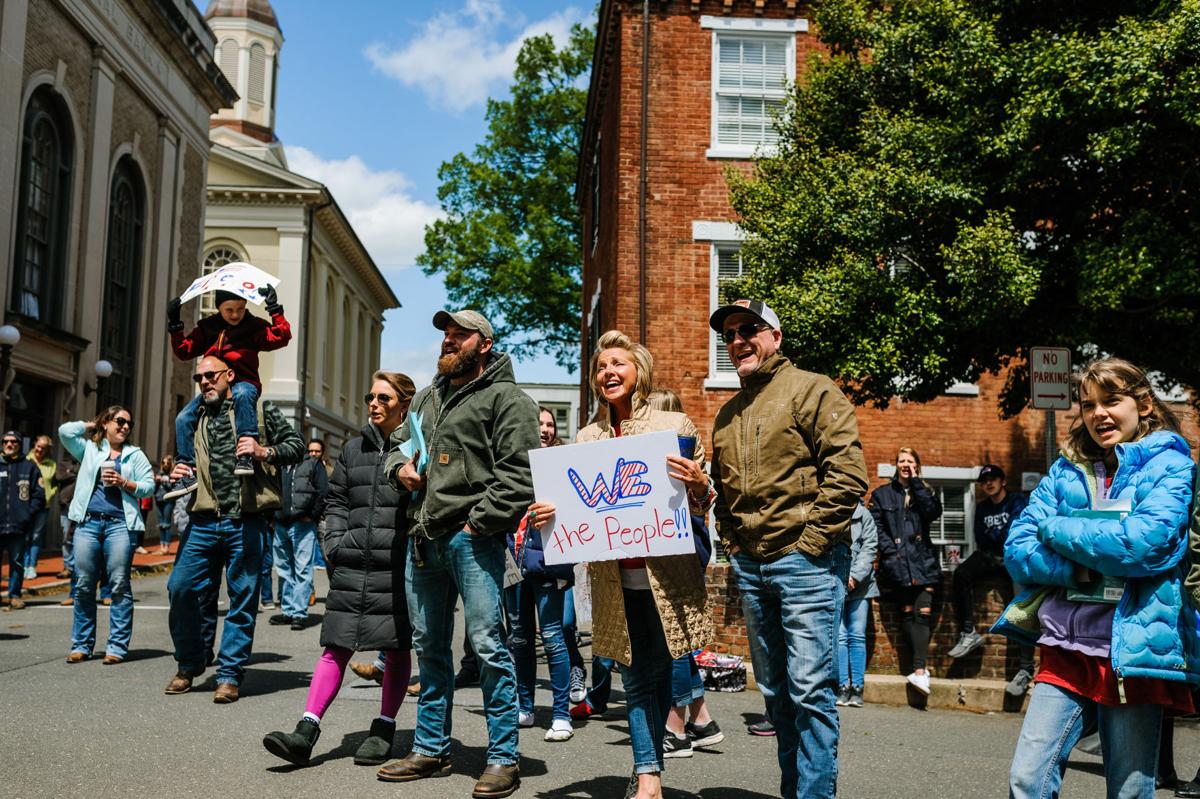 Attendees react to a speech during the rally. 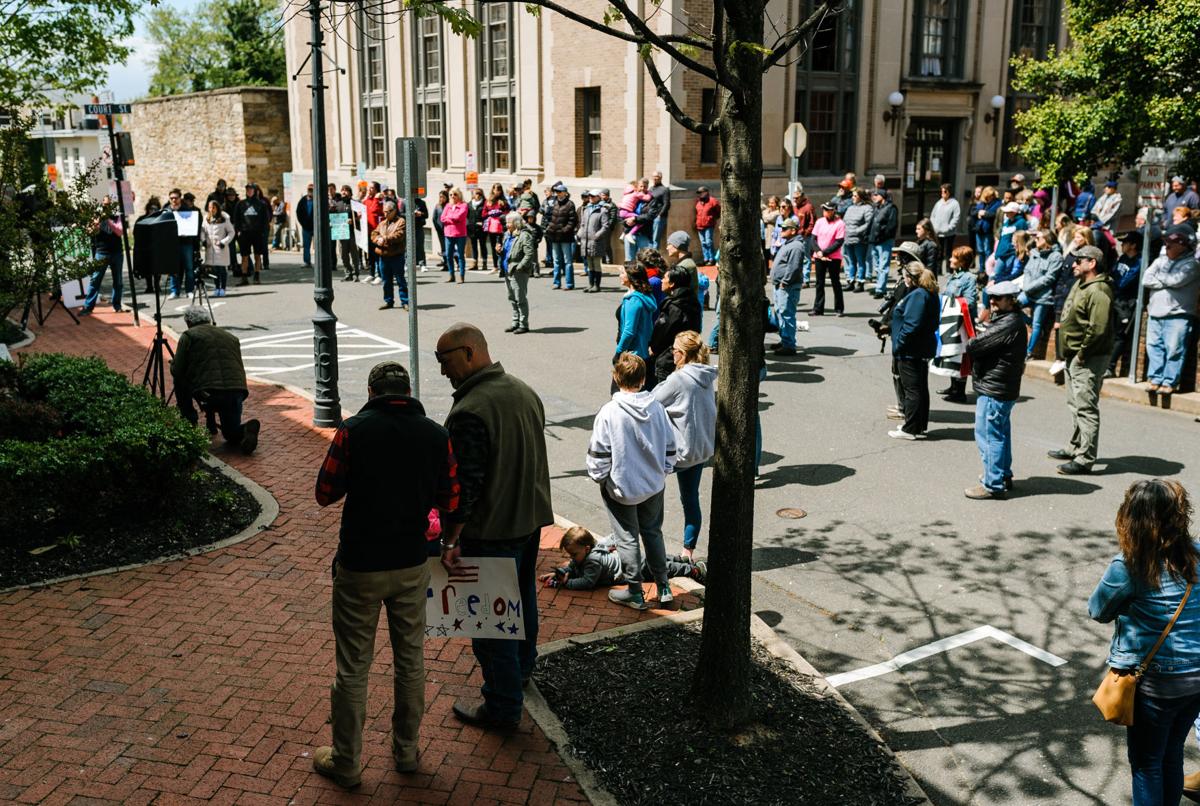 Rally attendees are assembled on Hotel Street to listen to speeches during the event. 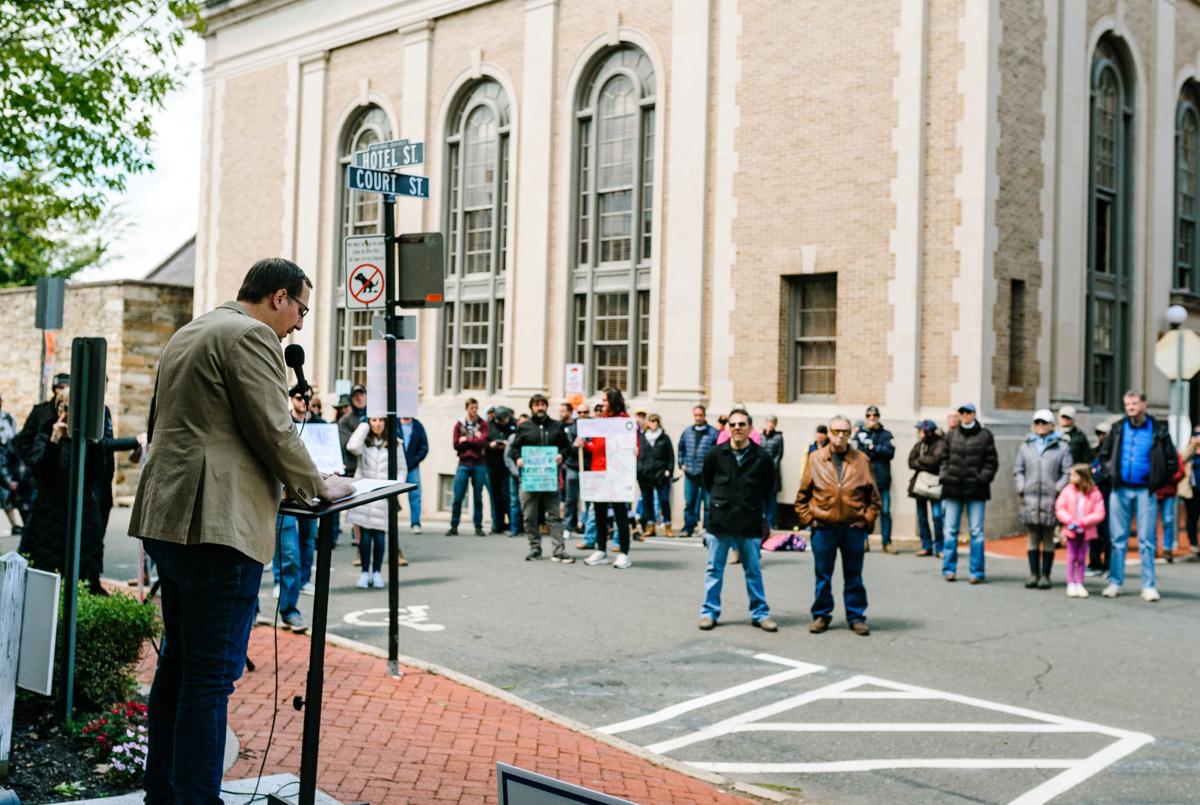 Rev. Jason Garwood, a pastor at Cross and Crown Church in Warrenton, addresses the crowd during the rally. 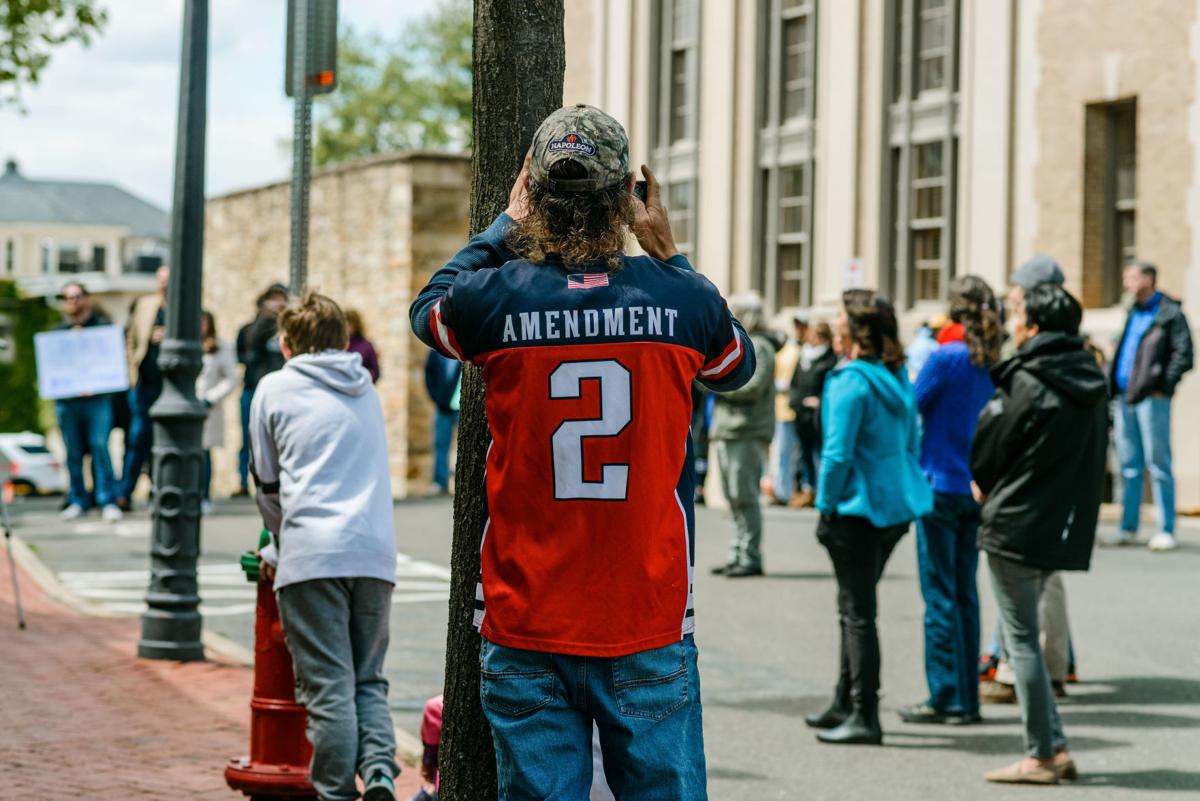 A man takes a video of the crowd during the rally. 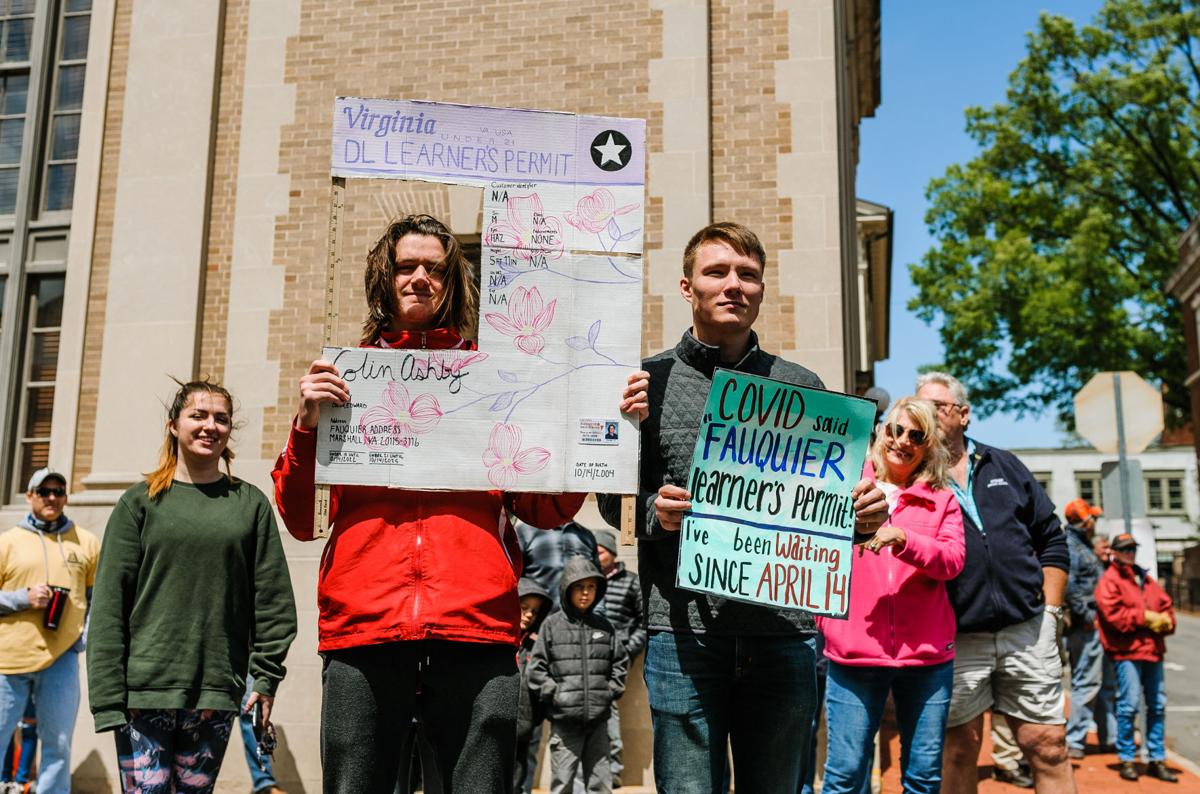 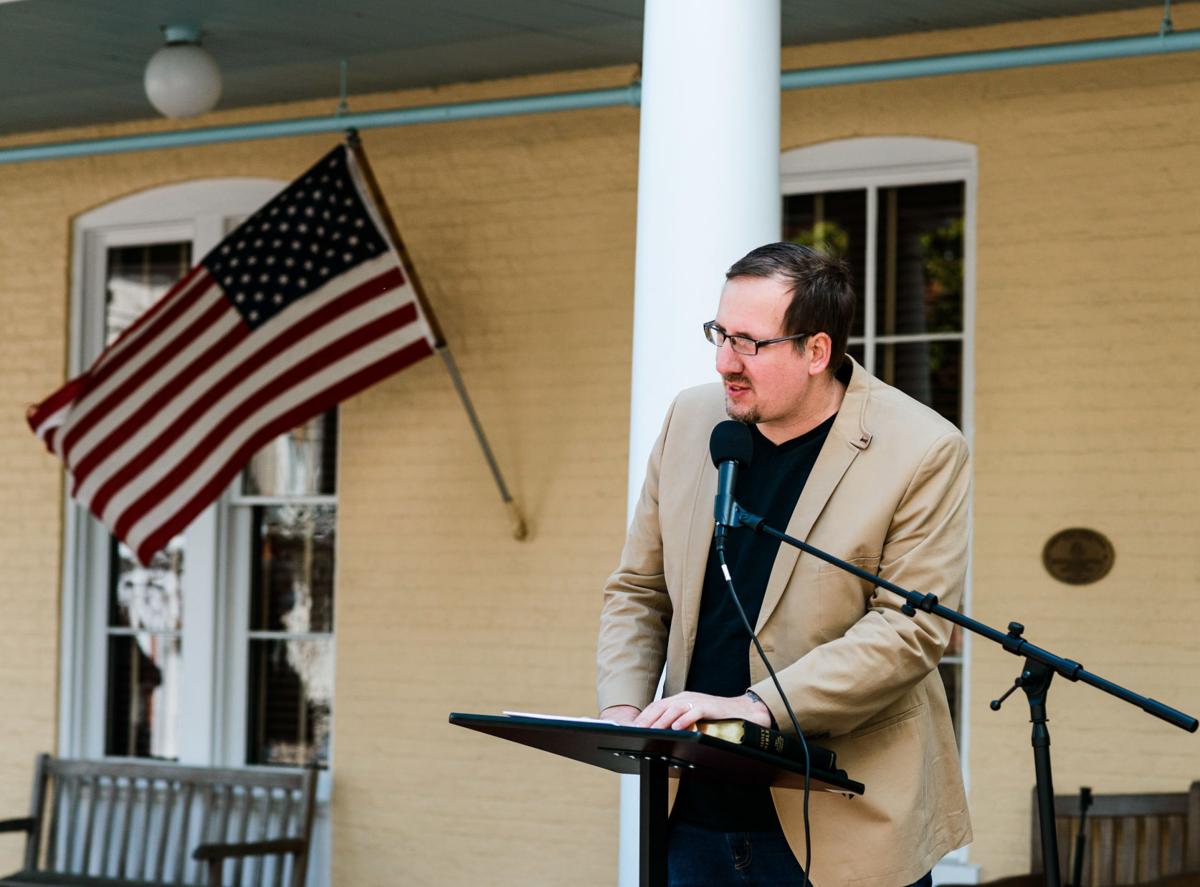 The Rev. Jason Garwood, of Cross & Crown Church in Warrenton, addresses the crowd from the podium. 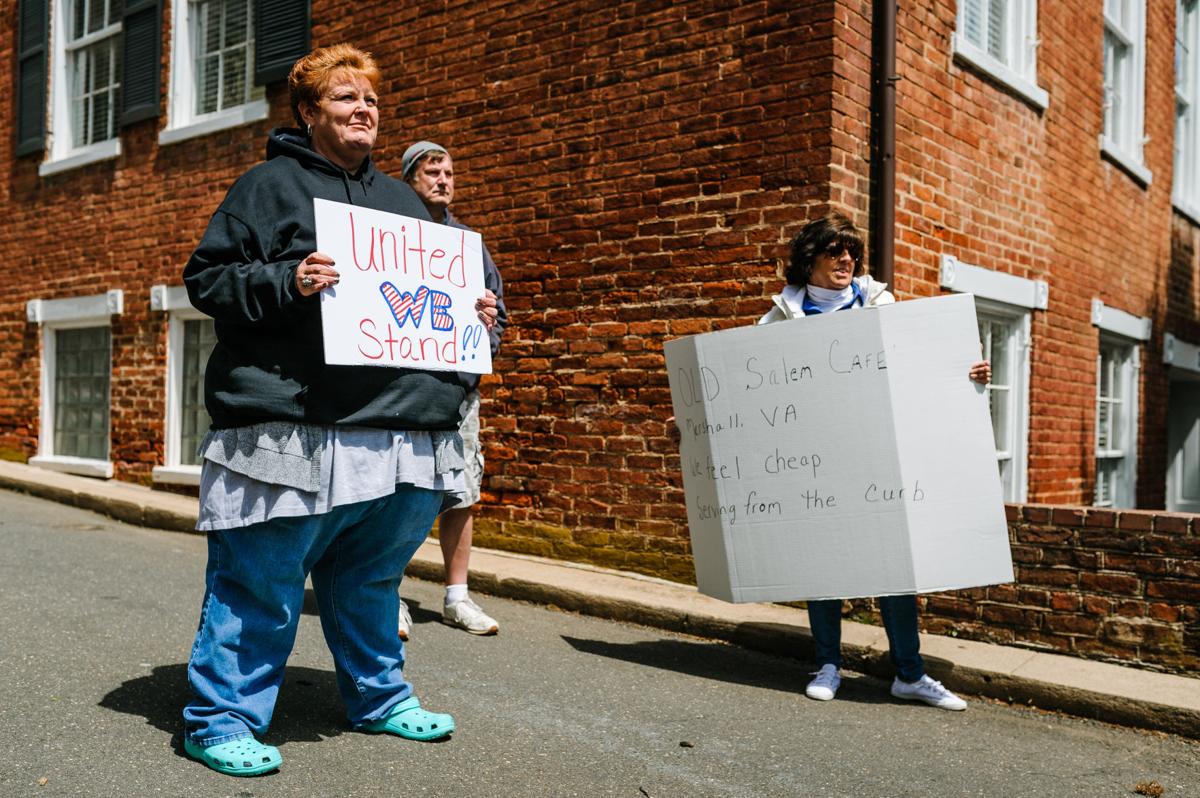 Lance Allen addresses the crowd during the rally.

Dolly Jones sings the National Anthem before the start of the event.

Attendees react to a speech during the rally.

Rally attendees are assembled on Hotel Street to listen to speeches during the event.

Rev. Jason Garwood, a pastor at Cross and Crown Church in Warrenton, addresses the crowd during the rally.

A man takes a video of the crowd during the rally.

The Rev. Jason Garwood, of Cross & Crown Church in Warrenton, addresses the crowd from the podium.

On Saturday afternoon, more than 100 people gathered in front of the Warren Green Building in Warrenton to protest the restrictions on businesses and public gatherings that have been put in place by Gov. Ralph Northam during the novel coronavirus pandemic.

The assembled crowd comprised mostly of adults along with some youth and young children. The vast majority of those in attendance did not wear masks and were not maintaining recommended social distancing.

Warrenton police officers, who had blocked off Hotel and Court streets for the event, stood at barriers at the entrances to each of those streets. According to Warrenton Town Manager Brandie Schaeffer, the town did not issue a permit for the event.

Chris Concannon, a resident of Fauquier County who said he was laid off from his job due to the restrictions, was the principal organizer of the event, which was dubbed the “Reopen Fauquier County Rally.”

Several scheduled speakers addressed the crowd, and the mic was then opened to local business owners who supported the call to lift restrictions. About an hour and a half after the event started, Concannon led the crowd in a chant – “Facts not fear! Reopen Fauquier!” – and the crowd dispersed.

Reading Executive Order 55 during the rally, Concannon came to the part of the order that says that people in outdoor settings “must at all times maintain social distancing of at least 6 feet from any other person.” Concannon turned toward the crowd and said, “Look at us now!” to cheers and applause.

Concannon created a Facebook group last month “to organize and work toward a reasonable solution to the COVID-19 crisis as it relates to Fauquier County, VA.” According to the group’s public description, “Our goal is specifically to see our beloved county reopen!” The private group had more than 800 members as of May 9.

Speaking during the rally, Concannon said that local law enforcement should “interpose” against enforcement of the orders. “Everyone in Nazi Germany was ‘just doing their job,’” he said. “Everything Hitler did was legal.”

Sheriff Robert Mosier on Saturday night said that everyone is entitled to exercise their right of free speech, but that comparing the Commonwealth of Virginia to Nazi Germany was incorrect. “The difference is we have due process here. If you have a problem, you take it through the courts and work through due process.”

Mosier acknowledged, “A lot of people are hurting now... but we are moving toward reopening.” Kochis said he preferred not to comment on the rally.

On several occasions, Concannon referred to the governor as “blackface Northam,” a reference to a 2019 scandal during which Northam faced numerous calls to resign. (The governor admitted to wearing blackface in the 1980s as part of a Michael Jackson costume but denied appearing in a photograph on his medical school yearbook page, which was at the center of the controversy. The photo shows one person in blackface and another in a Ku Klux Klan robe and hood.)

“Our livelihoods have been swept from us,” Concannon said, adding later, “Our rights have been trampled from us; the economy has been flushed down the toilet.”

Concerns about the economic impact of government actions during the pandemic were one of the main focal points of speakers during the rally, but speakers often interspersed references to religion and a broader sense of “liberty” that, in their view, had been threatened recently, especially by the democratically controlled Virginia Assembly and  Northam.

“What places of worship are still deemed essential?” Concannon asked the crowd at one point, to responses of “none!” and general booing.

Jason Garwood, the pastor of Cross and Crown Church in Warrenton, said that business owners affected by the executive orders should reopen. “Regardless of what Richmond says, owners should open back up today,” he said from the podium, “because God’s law is higher than man’s law.”

But his argument went beyond economics. Garwood listed what, in his view, has been an erosion of civil rights in recent years and called on attendees to continue opposing “tyranny.”

He said, “This ‘Reopen Fauquier County’ rally is our Omaha Beach,” a reference to the invasion of Normandy in World War II. “We want Berlin.” He added later: “We have tyrannical regimes to squash,” though he did not specify a person or government entity.

Garwood said that the novel coronavirus itself has caused some harm. “I do weep for those who have suffered a tremendous loss,” he said.

Garwood has previously been critical of vaccination, calling it a form of “medical tyranny” in an April 17 Facebook post, saying that Bill Gates’ and Dr. Anthony Fauci’s advocacy for a coronavirus vaccine will, among other things, “undoubtedly further the religion of statism and eradicate the blessings of freedom under God.”

In a March 5 tweet, Garwood wrote: “The #CoronaVirus hysteria is nothing more than a cover story used to scare you into getting more toxins into your body. It’s a simple supply and demand formula used by government-protected pharmaceutical companies whose lust for power, control and more money drives every pill [and] vaccine.”

Another speaker, Lance Allen, spoke out specifically against Northam. “The recovery begins when Gov. Northam loses his [job],” he said to cheers. Later he addressed the governor again, “You stay home – let us get back to work.”

Allen disagreed with Concannon’s call for local law enforcement officials to refuse to enforce state law, instead arguing that the proponents of reopening should focus on the state government and work with local law enforcement to alleviate the situation. Allen called both Mosier and Kochis “great men.”

Another of the main speakers, Jewels Cabitto Bee, owns a business that provides music lessons. “I am already so sick and tired of people telling me I don’t have the right to walk out of my house when I want to; I don’t have the right to sit on my front porch with who I want to,” she said. “I can’t invite my family over for a freaking picnic because it’s way more than flipping ten people, and – without getting arrested. This is ridiculous.”

She announced to the crowd that she was reopening her business on Monday and was met with loud cheering from those assembled. “I’m telling you guys, open your doors; we have the right,” she said.

Another music instructor, Dolly Jones – she also sang the National Anthem before the start of the rally – told the crowd that she had suffered financially because of Northam’s executive orders. “I can only try to slow the destruction of my business as I put more and more on credit,” she said.

“It is possible to protect our lives and our liberties at the same time,” she said, adding “we are not asking for people to die so that we can get pedicures. No one should be forced to work if they feel unsafe doing so. It would be foolish to advocate for our own freedom at the expense of someone else’s.”

She elaborated: “We don’t want handouts. We want the dignity of being able to feed our children with the money we have earned fair and square. For it is a noble thing to work.”

She quoted Martin Luther King, Jr.: “One has a moral responsibility to disobey unjust laws,” concluding later in her own words: “My liberty, your liberty is essential. It is time that we open our businesses back up today.”

Krysta Langor, of Nokesville, attended the event donning a pink “Trump” hat. “I’m here to support small businesses and support the reopening of the county,” she said, adding that she asks local police not to enforce what she called the “edicts” from Northam. “In my opinion they are not laws,” she said of the executive orders. “Basically, just reopen as quickly as possible. Let businesses who want to open, open.”

Another attendee, a resident of Warrenton who did not give his name, said that the executive orders are “illegal, unconstitutional, and anyone who is enforcing the orders is an agent of tyranny.” He held a sign that said: “Stay-home orders are unconstitutional.”