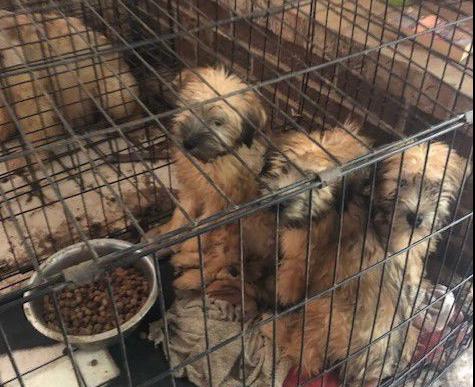 Two people were charged yesterday on animal cruelty charges as a result of an investigation into an alleged puppy mill in southern Fauquier County. 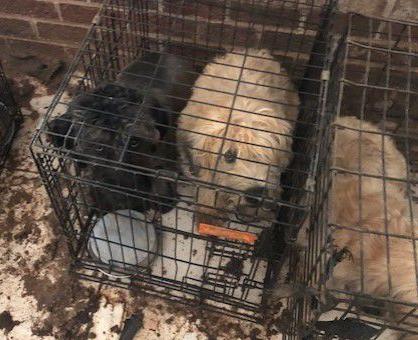 Eighty puppies were taken from a facility in southern Fauquier yesterday. They are being vetted and cared for at the Fauquier SPCA.

Two people were charged yesterday on animal cruelty charges as a result of an investigation into an alleged puppy mill in southern Fauquier County.

Eighty puppies were taken from a facility in southern Fauquier yesterday. They are being vetted and cared for at the Fauquier SPCA.

Fauquier County Animal Control deputies seized 80 dogs in poor condition from a location on Folly Court, in the Tower Hill Road area of Fauquier County near the Stafford County line. Two owners of the facility have been charged with animal cruelty, a felony.

Deputies executed a search warrant at a suspected puppy mill on Wednesday, Sept. 11, after receiving an anonymous tip, reported Sgt. James Hartman of the Fauquier County Sheriff’s Office. The tip was received, Hartman said, from someone who was shown a dog to purchase. The person alleged the dog was “noticeably not well cared for and had fleas,” said Hartman. The information received by police alleged the facility was breeding and dealing in Wheaten Terriers.

Animal control deputies talked to Vernine Barbara Gipstein, who was identified as an owner of the facility. Deputies reported that Gipstein would not grant full access to the property so that deputies could determine the welfare of the dogs, said Hartman. The deputies’ observations led them to believe the dogs were not being properly cared for, he said. The investigation also determined that the facility was not properly licensed.

An animal control deputy conducted further investigation and obtained a search warrant for the facility; it was executed on Wednesday afternoon. Hartman said deputies discovered many dogs in poor condition who were being held in extremely unsanitary conditions; most had no access to water. Many of the terriers were in poor health with matted, tangled fur. One terrier was found to have an exposed femur on one leg.

Eighty dogs were seized as a result of the search warrant.

The dogs were taken to the Fauquier County Animal Control facility located at the Fauquier SPCA, were they are being vetted and properly cared for, said Hartman.

Vernine Barbara Gipstein, 69, of Midland, has been charged with one count of felony animal cruelty and misdemeanor possession of marijuana. She was released on a $3,000 unsecured bond.

Barton Mannes Gipstein, 75, of Midland, is also charged with one count of felony animal cruelty. He was released on a $2,500 unsecured bond.

Hartman said that the investigation is continuing and “it is anticipated that further criminal charges may be forthcoming.”

On Nov. 25, a grand jury will consider a charge of torturing an animal causing death against Barton and Vernine Gipstein of Midland, in connec…

Barton and  Vernine  Gipstein,  of Midland, pleaded no contest in Fauquier County Circuit Court on Jan. 14 to one felony count each of torturi…