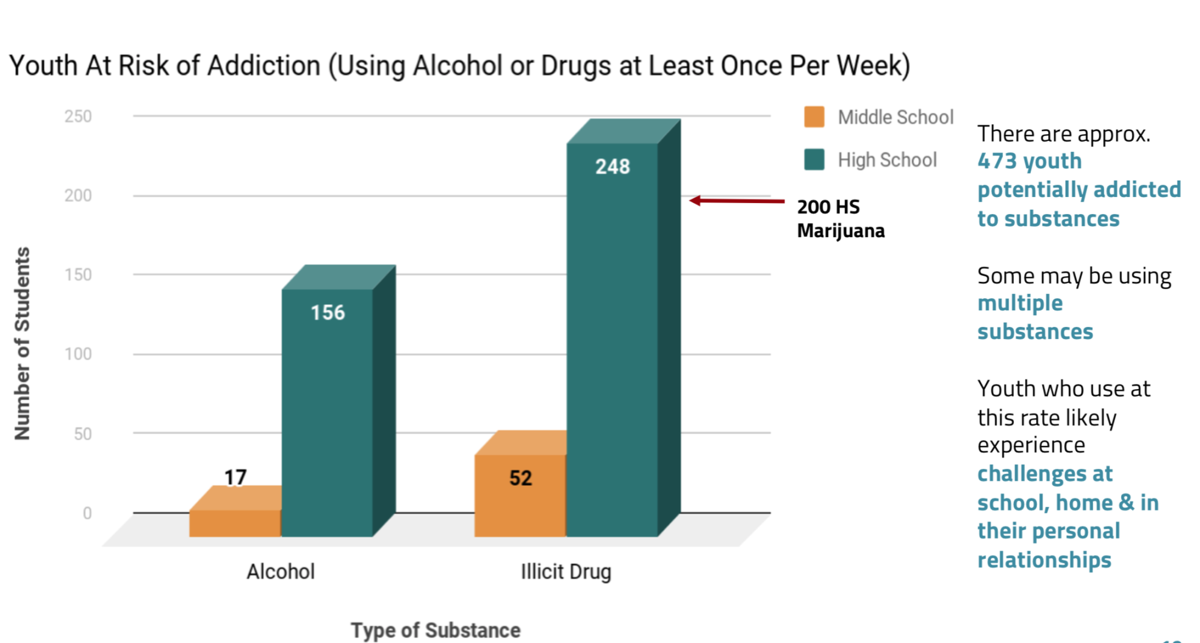 Results from the 2019 Pride Survey. 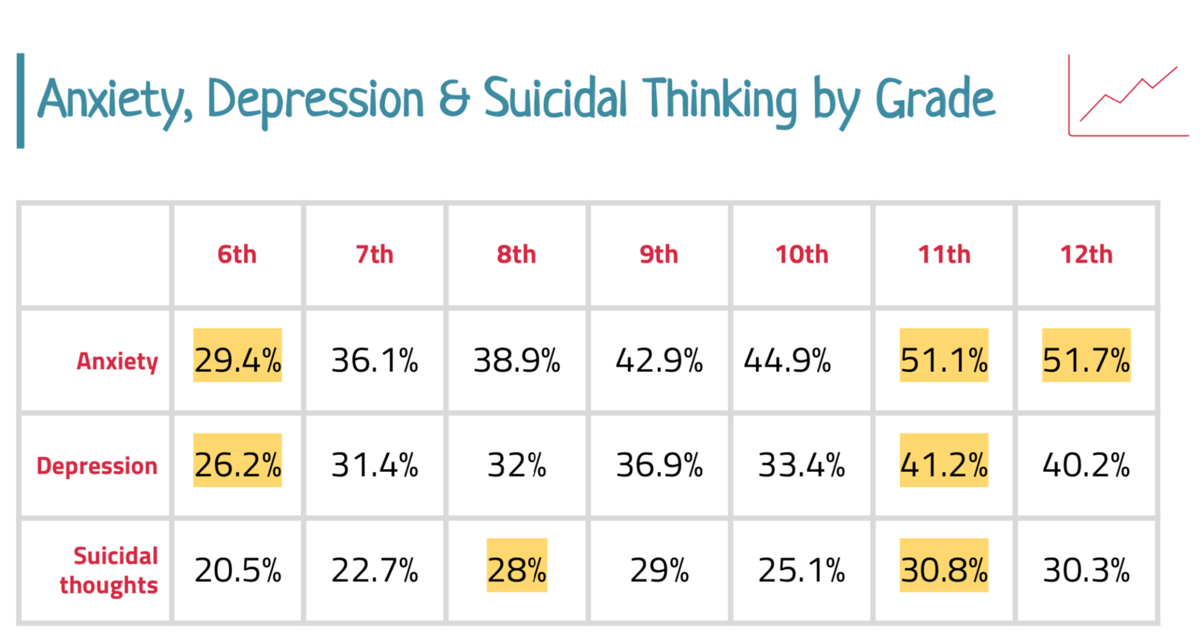 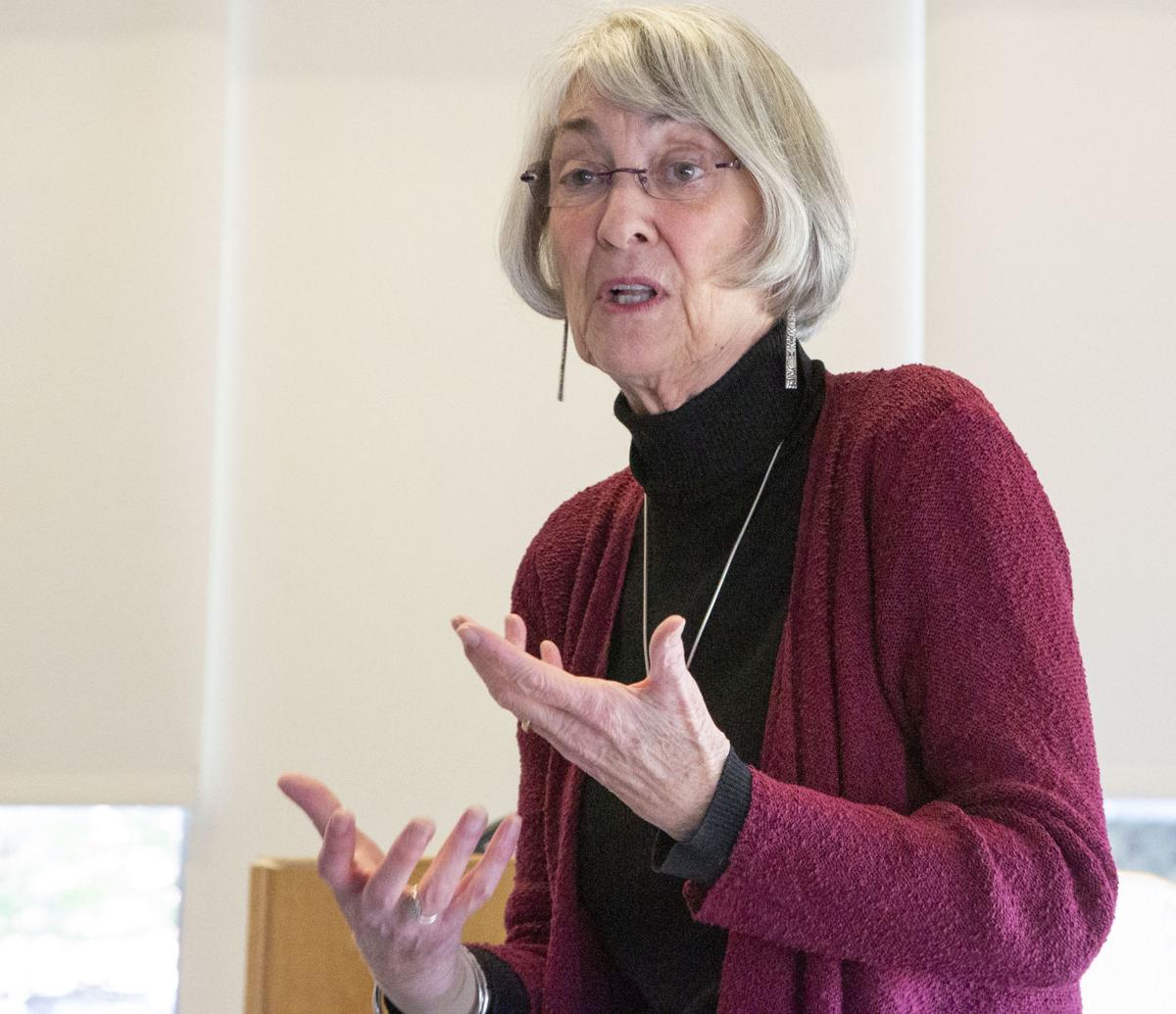 Sallie Morgan is the executive director of the Mental Health Association of Fauquier County. She was one of three presenters at a meeting of the Partnership of Community Resources on Feb. 7.

There are many reasons to try to understand at what age – and how often -- local students are using drugs and alcohol. For Sallie Morgan, executive director of the Mental Health Association of Fauquier County, one of the most important reasons is the effect early behavior has on the likelihood of future addiction. She said that according to the surgeon general, nearly 70 percent of those who try an illicit drug before the age of 13 develop a substance abuse disorder within the next seven years, compared with 27 percent of those who first try an illicit drug after the age of 17.

Brittany Dwyer, community outreach coordinator with MHAFC, and John Waldeck of Fauquier Cadre, joined Morgan Friday morning to present the 2019 PRIDE Survey results to members of the Partnership for Community Resources. “The more we can push back the age of first use, the less likely someone is to be addicted,” Dwyer said. An analysis of the survey data estimates that there are 473 youth in the region who could potentially be addicted to drugs or alcohol.

The 2019 PRIDE survey asked 6,011 students in grades 6 to 12 questions about how often they use drugs and alcohol, at what age they first started using and where they engage in this behavior.

The survey included students in Fauquier County Public Schools (5,621), Rappahannock County Public Schools (238) and Highland School (152). It has been administered every four years or so since 1990, but this is the first time sixth graders were included; 2019 is also the first time a private school has been surveyed. Waldeck said, “We are so glad Highland agreed to be a part of the survey this year. It’s a small sample, but it says a lot that they wanted to understand how their students are doing when it comes to these questions.”

An audience member presented a cautionary note during Friday’s forum; he reminded attendees that marijuana’s potency has increased dramatically in recent years. The Centers for Disease Control states, "... the types of marijuana available today are more potent than before and come in many forms, including oils that can be vaped, and edibles, from brownies and candy to sodas."

According to the survey, the average age that students first use drugs or  alcohol is about age 13. Those students who engage in drug and alcohol use do so most often at home or at a friend’s house.

Again, Morgan emphasized the importance of early intervention. “One half of all mental health challenges show up by age 14,” she said.

For those who wonder how reliable the PRIDE Survey data is, Waldeck explained that students’ answers are carefully analyzed and curated. He said that experts look at the completed survey responses and discard any where the results appear to be random. “This is the best data we have,” said Waldeck. He believes most students are honest about their experiences: “These kids know what’s going on, and they want to tell their stories.”

Key findings of the 2019 PRIDE Survey

Students who reported having suicidal thoughts:

Students were asked: “During the past year, did you ever feel sad or hopeless almost every day for two weeks or more?”

In response to increasing mental health needs among youth in the county, more than 1,800 adults (600 of them Fauquier County teachers) have completed Youth Mental Health First Aid training offered by the Mental Health Association. The eight-hour, evidence-based training helps participants recognize the signs of a mental health challenge and respond appropriately. Topics covered in the course include:

Anyone with questions about the training or who would like to attend a class may contact the Mental Health Association of Fauquier at (540) 341-8732.

In support of peer-to-peer help for students, a Teen Mental Health First Aid program is being piloted in 10th grade health classes at Fauquier High School this spring. The student-specific program is one of 35 being piloted across the country. The hope is that the program will eventually be rolled out to all high schools and be made a regular part of the high school health curriculum.

The 2019 PRIDE Survey was sponsored by:

It was supported by:

Do the percentages vary between public and private school?