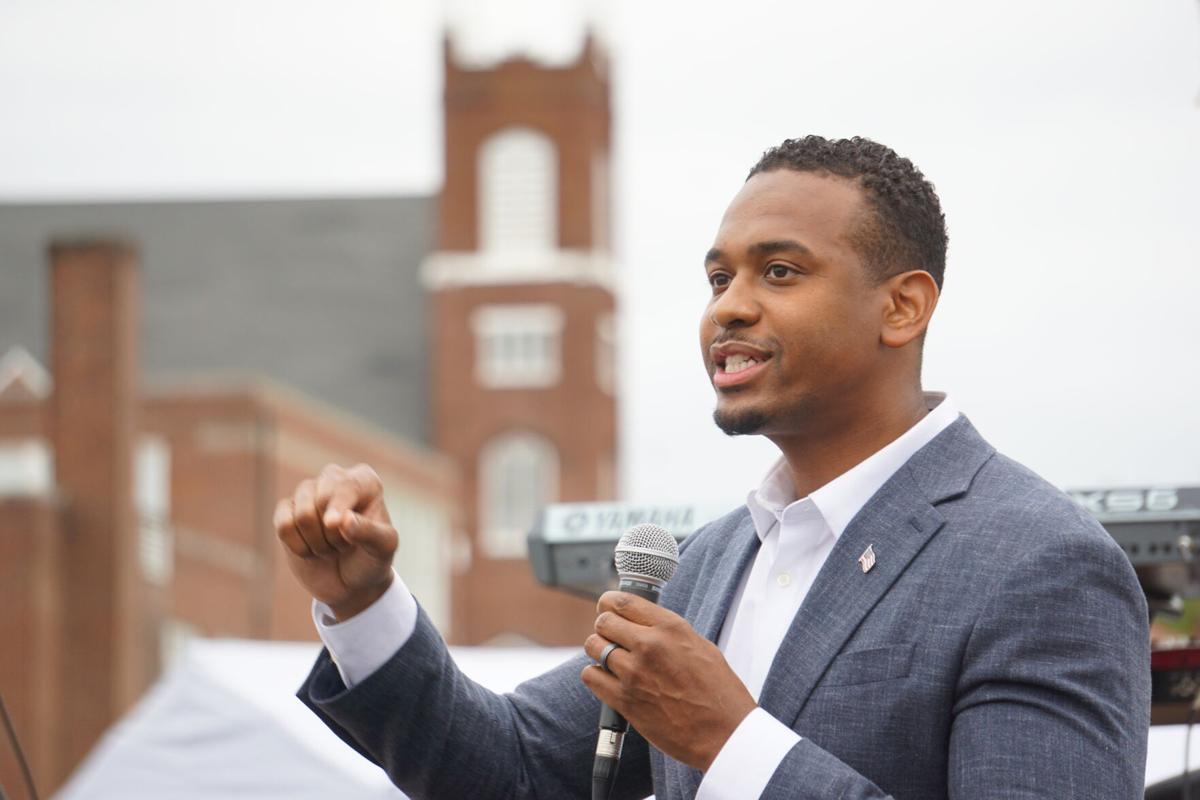 Dr. Cameron Webb addresses a crowd of nearly 200 in Danville, Virginia, at a Danville NAACP event Sept. 26, one of several campaign stops he would make in the region that day. 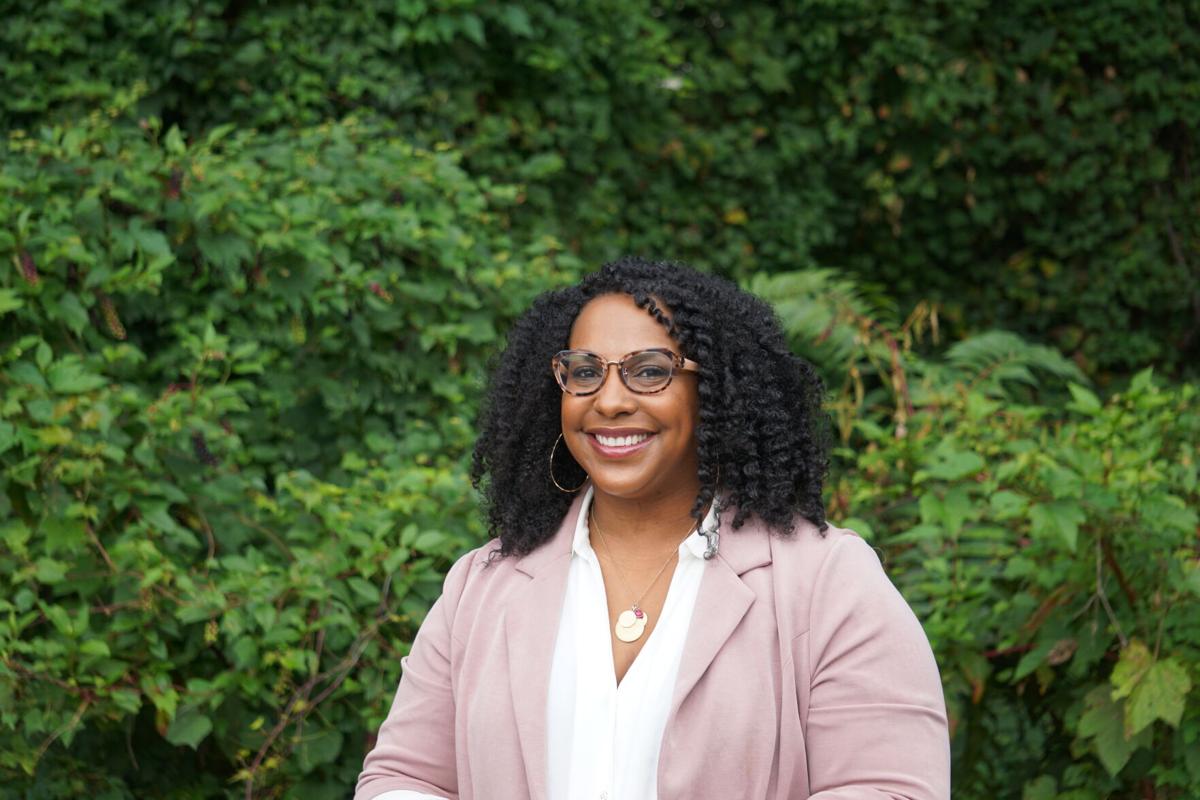 Mia Woods is the chief operating officer of the Boys and Girls Clubs of Central Virginia. 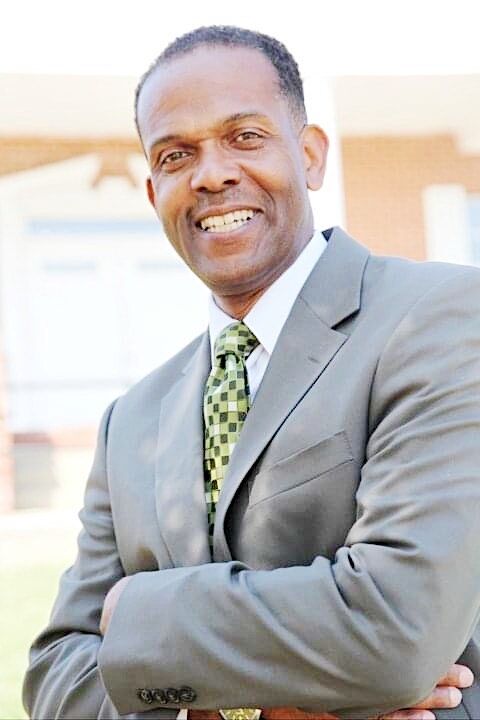 Cameron Webb’s father-in-law Alfred Jones has served as a mentor to Webb over the years.

Cameron Webb had just completed his medical and law degrees when he was accepted as a one-year White House fellow in President Barack Obama’s administration. Webb, who had never before worked in political circles, said he “decided to take a leap of faith.”

The fellowship, which had Webb working on the White House health care team in the Office of Cabinet Affairs, began in 2016 and carried into 2017 under the administration of a new president, Donald Trump. The transition was rocky. On his first day working for the Trump administration, the cabinet affairs deputy secretary refused to let him in the office and directed him to a desk in the hallway, he said.

“I thought it would be a day or two. Two days turned into two weeks turned into two months. The entire time I was sitting at a desk in the hallway of the executive office building,” Webb said.

Determined to build relationships with Trump administration officials, he was eventually asked to lead a White House task force on drug pricing. “It was just a matter of realizing that you can build real relationships even if you don’t agree all the time. And you can lean into those relationships to try to find compromise. And that’s what working together looks like.”

Now, Webb is running for Congress Virginia’s 5th Congressional District. He said the fellowship showed him “just how powerful it can be to leverage that legislative space to improve the health and wellbeing of folks across this country.”

What he learned during the fellowship “was really what put the seed there,” Webb said about his run for office.

Webb, 37, is facing an uphill battle in a district that hasn’t chosen a Democrat since 2008. The oddly shaped district stretches from North Carolina border going 250 miles up to Fauquier County.

The candidate is leaning on his experience as a physician and policy expert at the University of Virginia School of Medicine to consolidate support for his campaign.

His father worked at the federal Drug Enforcement Administration, helping to hire federal agents and design training programs. “Public service was front and center,” Webb said. “I think that service mentality was kind of baked into my upbringing.”

Webb said his dream of becoming a doctor began at the age of 5 when his family’s primary care doctor – a young, African American man named Dr. Timothy Yarborough—encouraged him to dream big. “In the mentorship space we say, ‘you can’t be what you don’t see,’ and that was so important. I think it really made a difference.”

By the time Webb reached the University of Virginia as an undergraduate pre-med student in 2001, he was already looking forward to serving his community as a doctor.

Xavier Richardson, 63, a family friend, said he got to know Webb through church and saw him “as someone who knew early that he wanted to serve others, said Richardson. “He believes he has an obligation to society to give back.”

The spark that would eventually motivate Webb to run for political office didn’t take shape until his freshman year of college. Webb said that his eyes were opened during a first-year anthropology class at UVA when a young, Black UVA family doctor named Dr. Norman Oliver gave a seminar about health disparities based on race and ethnicity.

Oliver, who now serves as Virginia’s state health commissioner, quickly became a mentor to Webb. Oliver was one of Webb’s character references when he later took the bar exam at Loyola University Chicago School of Law in 2012.

“It all came from that class talking about health disparities. That was just incredibly eye opening for me,” Webb said. “It struck me as a social justice issue. It struck me as a civil rights issue. I think there were a lot of things that went into it, but for me, I thought that was something that I could not let stand.”

During college, Webb met his now-wife Leigh-Ann Webb, who is an emergency services physician in the UVA Health system and assistant professor of emergency medicine in the UVA School of Medicine. They have two children, Avery and Lennox.

The barriers to health care Webb saw firsthand as a medical student ultimately motivated him to take a break from his medical school training in 2009 to pursue a law degree, where he started to learn about public policy. His studies began just as debate erupted over the legislation that would become the Affordable Care Act.

“Here I was, passionate about addressing disparities and seeing this significant legislation put together that has the potential to improve access to affordable care for everybody … That certainly opened up my eyes to politics as a space where you can effect some real change on the healthcare front and make sure that everyone has opportunities to stay healthy,” Webb said.

After returning home to Charlottesville from the White House fellowship in 2017, Webb started work as both a practicing physician at the UVA Health system and as a professor at the medical school.

Returning to his community was the final piece of the puzzle, Webb said.

“I recognized that I had a unique opportunity to serve their needs, and to serve their healthcare needs, by being their representative in Washington,” Webb said.

Webb entered the congressional race in August of 2019. He beat three contenders in the Democratic primary. Now, he hopes to be the first Democrat in more than a decade to represent the 5th District.

Mia Woods, 37, a family friend of the Webbs, said the news of his campaign was “both surprising and not surprising” to friends and family. Woods has known the family since she and Cameron Webb attended UVA together. She currently serves as the chief operating officer of the Boys and Girls Clubs of Central Virginia.

“Leadership has always been a part of what Cameron does,” Woods said. “I think that no one is surprised that he is still engaged and seeking out leadership roles, but also seeking out how to help as many people as possible beyond the front lines with his voice.”

‘Faith was a starting point’

But even after medical school, law school and a job working for the White House health care team, Webb said it wasn’t an easy decision to step into the political arena. He said he looked to his Christian faith and mentors in the church to help him “dig deep on why I’m doing this and why this is on my heart.”

“My faith was a starting point for this race because I was adamant about saying, ‘I’m not going to run for Congress just to glorify myself.’ So, unless this is part of my purpose and how I’m meant to serve people, I’m not interested in doing it,” Webb said.

Webb said he turned to his father-in-law and mentor Alfred Jones, a retired pastor and current Appomattox County School Board member, for advice. Jones said he first heard that Webb was contemplating entering politics about a year and a half ago.

“He told me that he was praying about it and he asked me if I would pray along with him about making that decision,” Jones said.

As an elected official himself, Jones said he shared some advice with Webb. But he added that running for school board and running for Congress is like “comparing apples and oranges.”

Webb said his experience in the medical field, treating patients from all walks of life, has put him in a unique position to work across the aisle. As a physician, Webb said he doesn’t pick and choose his patients, but every patient is given the highest level of care.

“If we translate that into our politics. If we really move toward putting the people of our district over our partisan politics, then we get real service in the 5th Congressional District,” Webb said.

Amid the partisan toxicity in Washington D.C., he sees an opportunity to be “a healer.”

“I think one of the paths forward, to get beyond that, is to elect folks who are passionate about working with people who see the world differently than them,” Webb said. “And I think we have an opportunity to do that.”

On an overcast Saturday afternoon in Danville, 5th Congressional District candidate Cameron Webb addressed a lively crowd of nearly 200 at a Danville NAACP event, one of several campaign stops he would make in the region that day.

Webb joined local and state elected officials in speaking at the event, including state Sen. Jennifer McClellan, D-9th, who is running for governor in 2021. It was held on the basketball courts at Westmoreland playground.

Free coronavirus testing was offered by a local clinic to those in attendance.

Webb, a practicing physician who works on the coronavirus unit at the University of Virginia Health system, encouraged everyone at the event to get a test.

Webb added that “getting tested is a key to keeping our community safe.”