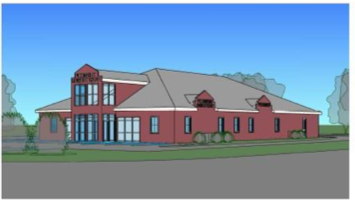 A rendering of what the new Piedmont Urgent Care/Remington Drug pharmacy would look like. 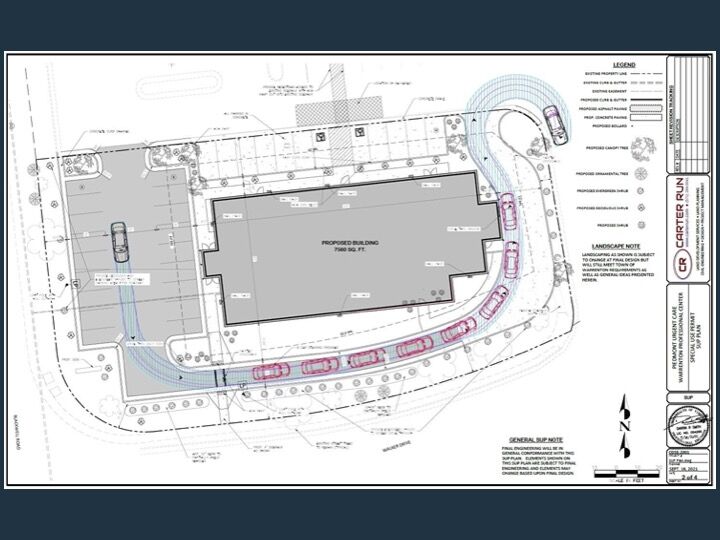 This drawing shows how vehicles would navigate the drive-thru lane. 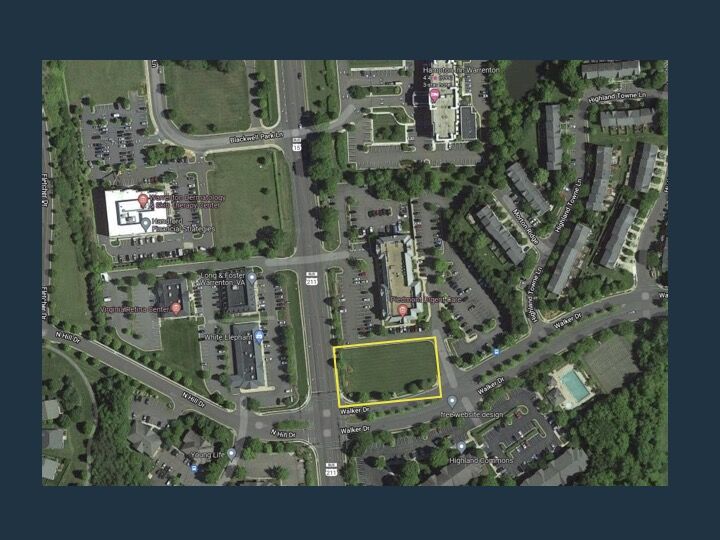 The new Piedmont Urgent Care building would be adjacent to the Warrenton Professional Center, on the corner of Blackwell Road and Walker Drive.

Dr. Steven von Elten of Piedmont Family Practice spoke before the Warrenton Planning Commission Sept. 28 about his plan to build a new 7,540-square-foot, one-story building to house his practice’s urgent care center and a pharmacy. Remington Drug Co., a 100-year-old independent pharmacy located on Main Street in Remington, would be a partner in the venture.

Piedmont Urgent Care is currently located on the lower floor of the Warrenton Professional Building, next door to the proposed new building.

Since it would be in a commercially zoned area of town, the new building is allowed by-right on the site. The drive-through for the pharmacy, however, requires a special permit, so planning commissioners had some questions about the drive-through configuration.

The new building would be adjacent to the Warrenton Professional Center, on the corner of Blackwell Road and Walker Drive. A 31-space parking lot would lead to the drive-through lane, which would have enough room for eight cars. The proposal states that the urgent care would be open seven days a week, 8 a.m. to 8 p.m., but von Elten said Thursday that the practice will adjust to what the community needs. von Elten estimated that there would be five employees on site at a time.

Planners asked about foot traffic around the building, commenting that it is a busy area for pedestrians. Piedmont Family Practice, the Fauquier Health Wound Healing Center and several other physician’s offices are housed in the four-story Warrenton Professional Building.

Darren Smith of Carter Run LLC, engineers working on the project, said that pedestrians would be able to move easily and safely between the buildings via a pedestrian walkway designed for the purpose.

Patients coming from the Warrenton Professional Center would find it convenient to get a prescription from a doctor and have it filled immediately by walking a short distance to the pharmacy, von Elten said. And of course, urgent care patients would be able to pick up prescriptions without leaving the building.

The outside of the building would be brick to match the Warrenton Professional Center.

He said his experience working in hospital emergency rooms informed the creation of the urgent care part of the practice. Piedmont Family Practice employs eight physicians, but von Elten said, “I’m the old guy. When I started practicing, some of these guys were in high school. I’ve been around for a while, so I get to take on these projects.”

In addition to being a partner in the medical practice, von Elten is a part-owner of the professional center.

During the early days of the COVID-19 pandemic, Piedmont Urgent Care was one of the few places where residents could secure COVID-19 testing. Test kits were scarce and people came from Northern Virginia and points west of Warrenton to get a test. The parking lot was often crowded until the early evening hours, as nurses hurried in and out of the building, administering tests to people in their vehicles.

von Elten said that the new building will not be able to accommodate such a scenario, but he expressed hope that in the two years required to build the new urgent care, the pandemic would run its course.

A public hearing will be held at the planning commission’s Oct. 19 meeting, at 7 p.m. in Warrenton’s Town Hall.

“Community is going to enjoy this facility”

In an interview Thursday, von Elten was enthusiastic about the project, which he’s been working on for a couple of years. “I’m excited. I can’t wait.”

The new building will allow Piedmont Urgent Care to expand from three exam rooms to nine and to add X-ray facilities. The waiting area will be more comfortable, with brighter lighting.

Piedmont Family Practice has a “moderately complex lab” in its current space. The lab will be expanded when it relocates into the new building.

“Like us, as an independent business, they work for their patients.”

He described how the urgent care space will “flow invitingly into the pharmacy space.” He said he believes there will be opportunities for urgent care staff to collaborate with pharmacists. He offered the example of a patient with multiple medications, “The pharmacist will be able to look at the whole picture, checking for drug interactions and other potential issues.”

With luck, said von Elten, the new building will be ready to welcome patients in the first half of 2023. “I’m looking forward to that. The community is really going to enjoy this facility.”