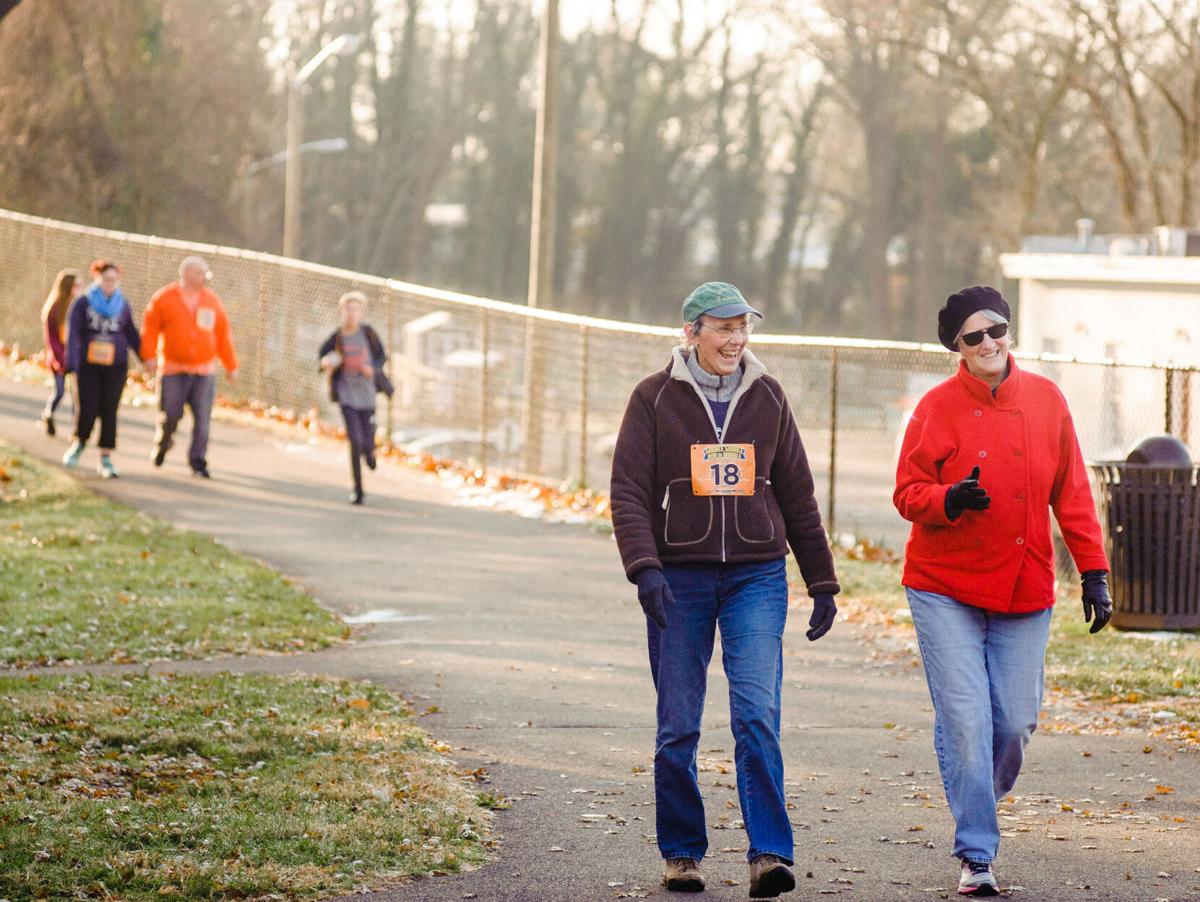 Participants in a charity 5k make their way down the Warrenton Branch Greenway in 2018. Trails and greenways are the most valued county parks department assets according to a 2017 survey of county residents. 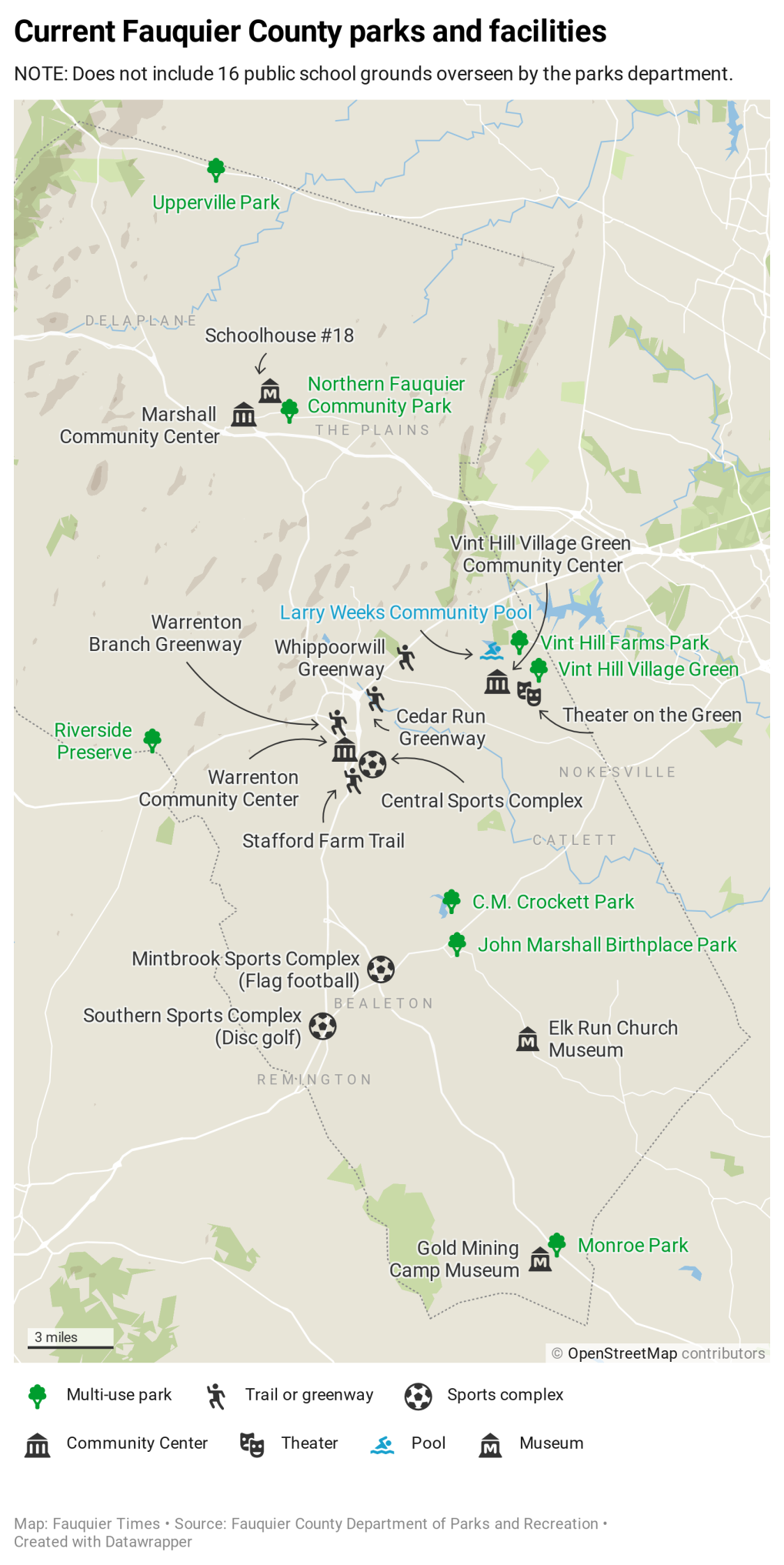 Based on community feedback, the plan will be adapted and presented to the parks and recreation board on March 1.

This month, the Fauquier County Department of Parks and Recreation released the first draft of its comprehensive master plan for the next decade, a 60-page document that lays out “a flexible guideline for making positive changes” to the county’s parks, facilities and programs. The previous formal update to the department’s vision for the future came in 1993.

There are three main focal points of the draft plan, which was developed by Charlottesville firm Land Planning and Design Associates in conjunction with the county parks department.

First, more money needs to be invested in basic maintenance of existing parks and facilities, especially to accommodate residents with disabilities. Second, more parks and facilities will need to be added in the next decade – and existing facilities expanded – to serve the growing populations of the Bealeton and Marshall areas. Finally, program offerings need to be adapted to serve a larger part of the county’s residents. (See boxes at the bottom of this story.)

Parks and recreation director Gary Rzepecki said there have been several planning documents since 1993 that affect aspects of the parks department’s mission, but many of those ideas have never come to fruition. “There are aspirational things on those plans,” he said. “We want to make it more concrete.”

Rzepecki, who has headed the parks and recreation department since taking over for the retiring Larry Miller in 2019, repeatedly emphasized he wants the master plan to be a practical and adaptable document. The process comes at an especially important juncture, Rzepecki added: park use has increased 20% to 30% during the pandemic -- more people are working from home instead of commuting, and spending time with friends outdoors is seen as safer than visiting indoors.

Additionally, he said, the current draft plan includes detailed analysis about how residents of each area of the county are served; the 1993 plan did not. “Those maps are key because they will show you were there are gaps, and when we make decisions to put things in the right place,” he explained.

And in rapidly growing areas like Bealeton, being able to show there are geographical gaps in parks services can be a tool in proffer negotiations with developers, he added, along with ensuring the right types of new services. For instance, he explained, the level-of-service analysis for the Bealeton and Remington areas found that the area had enough sports fields but could use more multiuse parks and trails.

What parts of the plan come to fruition will be determined mostly by the level of funding that comes from the county government and other sources.

All the improvements recommended by the draft plan would cost at least $43 million, an LPDA representative Tristan Cleveland told members of the parks and recreation board during a Feb. 3 meeting. Although there is $9.4 million for parks and recreation in the county’s five-year capital improvement plan, that figure is more than $17 million less than would be needed to implement all of the plan’s recommendations, she said.

Significant funding would need to come from private donors, sponsorships and other alternative sources if the plan as it currently stands is to be implemented, she added.

After years of waiting, residents may soon float the Rappahannock River

Chris Butler grew up just north of Remington, not five miles from the Rappahannock River, and he always liked to fish. But to reach the bass-r…

Rzepecki explained some of the challenges in addressing the maintenance backlog, which the LPDA analysis found would cost approximately $1.4 million over five years to correct.

The research for the master plan found, for instance, that many tennis courts and basketball courts were in a state of disrepair, affecting their safety and usability. Those cracks and crevices often are the result of problems with the foundation, Rzepecki said. To really fix it, the entire court needs to be renovated; otherwise, the need for patches and repairs continues indefinitely.

Rzepecki said there is some money in the department’s operating budget for ongoing maintenance, but – to use the tennis court example – permanently fixing just two tennis courts would take up most of the operational budget for an entire fiscal year.

“So it takes a number of years to catch up. Ideally you don’t want to be playing catch up. You want to make them last a long time,” he said.

The same goes for making parks facilities more accessible to visitors with disabilities.

When making accessibility-related changes to facilities, “We start with the parking spaces, then do you have travel path to the front door, then you start addressing all those issues in the building,” Rzepecki explained. But the scope of the needed fix is often beyond routine maintenance.

“The need is obviously to correct these, but often it’s like: you have to correct the whole parking lot. So it becomes a funding issue.”

The master plan, he said, “will really help us look at things holistically and zero in on what we need to do with the resources we have.”

Many of the pages of the draft plan contain information about how parks and facilities are distributed across the county and where some of the gaps in service might be. There is a common theme: the Marshall, Bealeton and Remington areas are largely underserved.

For instance, the document identifies the need for a community center and indoor recreation center in southern Fauquier County. The document also says Remington-area residents have few options for a nearby park. To meet that need, the draft plan calls for the mostly undeveloped Southern Sports Complex property north of Remington – it now hosts only a disc golf course -- to be built out as a multiuse park instead of focusing on ballfields.

The plan also calls for new public pools in the Marshall and Bealeton areas; currently, Larry Weeks Community Pool in Vint Hill is the only public pool operated by the county parks department.

Trails like the Warrenton Branch Greenway should also be a focus of future projects, the draft master plan says. According to a 2017 survey of county residents, respondents were twice as likely to say trails were the most important park facility than anything else.

Trails and greenways exist in several parts of the county; some are independent trails, some are part of a larger park. In addition to addressing maintenance issues at existing trails, the draft master plan calls for more links to be created between trail systems and neighborhoods. National recreation trends show an increasing preference for individual outdoor activities like running and hiking in a shift away from team sports.

A shooting range, pickleball courts, dog parks, indoor running/walking track and a “sprayground” (a playground comprised of water features) are among the other facility priorities listed in the document.

Also at the top of the priority list is adding more public access points to the Rappahannock River. Currently, the Riverside Preserve near Waterloo is the only Fauquier County park with access to the river.

The draft plan points out on several occasions the need to track participation in parks and recreation programs, adapt program offerings to changing community preferences and closely monitor what portion of expenses are recouped by program fees.

Rzepecki said addressing these deficiencies in particular has been one of his top priorities since coming on the job. Before he became director in 2019, he said, programs had been managed on a district-by-district basis, and no one had kept track of how well-utilized each program was or to what degree fees covered the costs of programs.

It’s an ongoing process, he said, but the need to identify program offerings that are becoming less popular – and replace them with programs more in demand – is being addressed.

Using data to better serve community residents is one of his main goals as parks director, he elaborated. “Whatever we can do to empower staff to do on their own … to really analyze and make decisions on data. If the data’s there, make decisions and run with it.”

More specifically, the draft master plan calls for the parks department to work toward offering programs for more age groups; programs until this point had focused mostly on elementary-aged children and middle-aged adults, leaving out many young people, young adults and seniors. Along with youth camps, some of the recommendations include youth swim lessons, youth and adult archery programs and trips and tours for seniors.

Rzepecki noted that many of the recommendations developed in the draft plan are already being implemented.

For instance, the spring edition of Good Times, the parks departments catalog of program offerings, was released this week. There are numerous youth activities listed, like a “teen sailing mini-camp” and a “teen art adventure mini-camp” – programs that address the deficiencies listed in the draft master plan.

Senior-specific activities are limited this spring because of the pandemic, but Rzepecki explained that new tour programs proved popular before the pandemic put a halt to them.

“The great thing about master plan process, it’s really a reevaluation of our processes,” he concluded.

The spring edition of Good Times, the parks department’s catalog of spring and summer program offerings, was mailed to county residents this week.

The catalog can also be found online here.