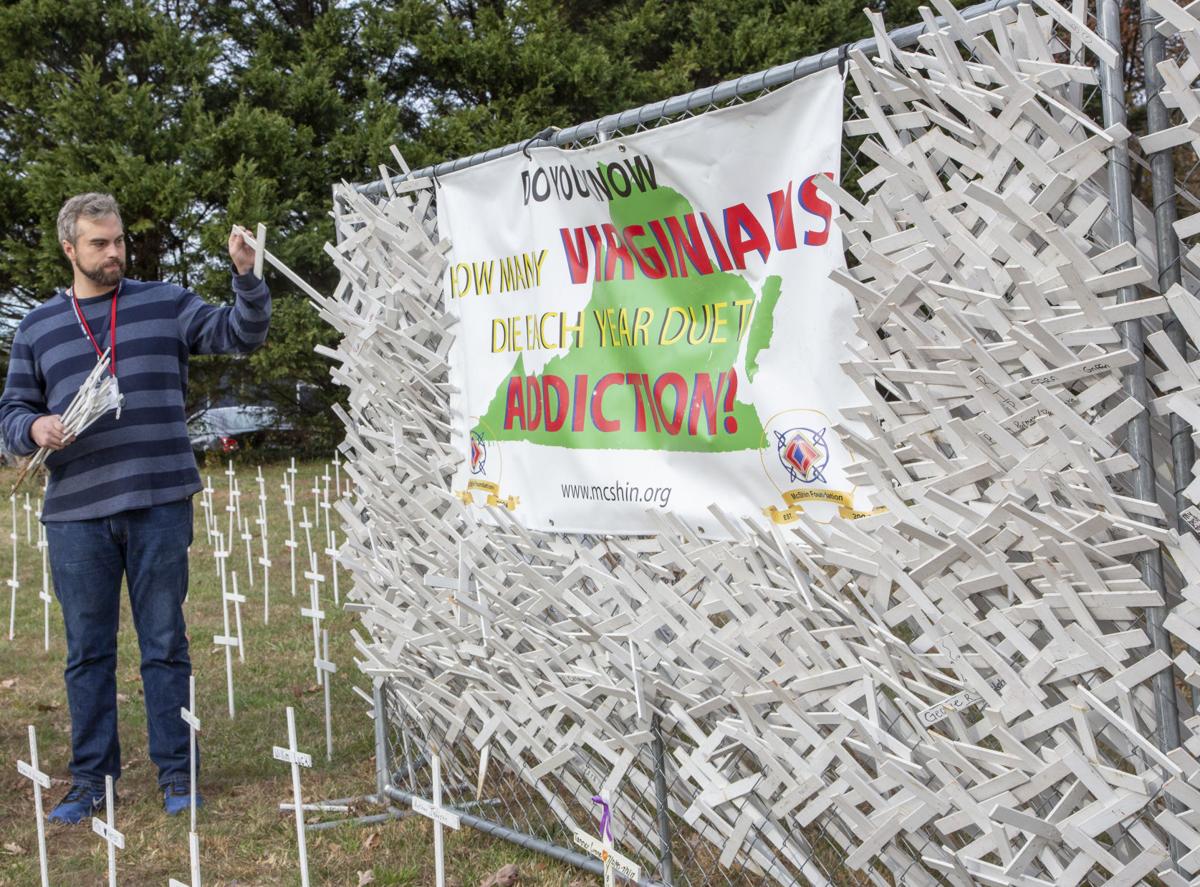 Andrew Platt of the McShin Foundation places a cross on the White Marker Project on Shirley Avenue in Warrenton in November of 2019. 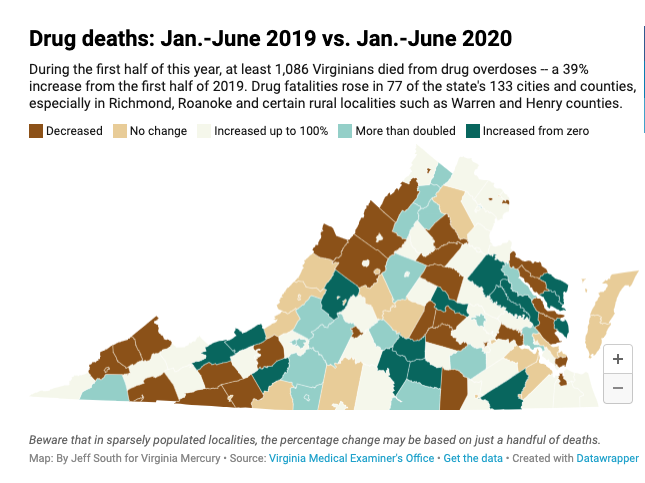 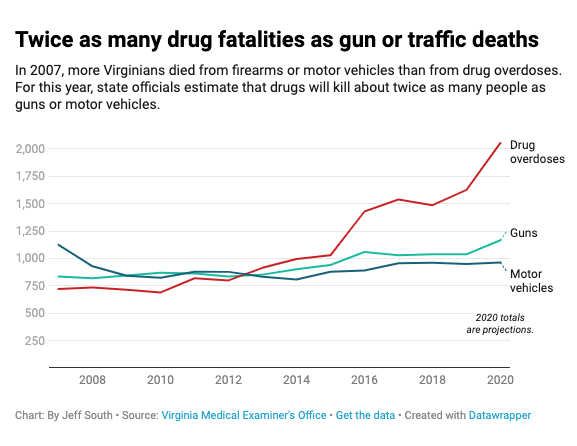 Since the start of the COVID-19 pandemic, fatal drug overdoses have exploded in Virginia, and health officials are predicting “the worst year on record by far” for such deaths in the commonwealth.

From January through June, at least 1,086 Virginians died from overdoses of fentanyl, heroin, cocaine, prescription opioids and other drugs, the state medical examiner has found. That represented a 39% increase from the first half of 2019.

Deaths rose especially during the second quarter of this year (April through June), shortly after Virginia mandated social distancing and other measures to curb the spread of the coronavirus. The state registered at least 634 drug fatalities during those three months — 67% more than during the corresponding period in 2019.

The statistics “suggest an enormous increase in fatal overdoses since the beginning of the COVID-19 national shutdown … and indicated that 2020 may be the worst year on record by far for fatal overdoses in Virginia,” according to a report Hobron compiled for the Office of the Chief Medical Examiner.

Experts attributed the increase to social isolation, job losses and other fallout from the coronavirus pandemic.

“I do think it’s a combination of those things,” said Dr. Taylor Ochalek, a research scientist at the Virginia Commonwealth University School of Medicine.

“Social isolation can obviously increase feelings of depression and other mental health symptoms. So people are feeling really alone during this time. That might put them at a higher risk of relapsing. They don’t have their normal social support.”

Overdose deaths rose in most cities and counties

Drug fatalities have been rising steadily for the past decade in Virginia. In 2013, they surpassed guns and motor vehicles as the leading cause of unnatural death in the state and climbed to 1,626 in 2019. The medical examiner’s report projects that for 2020, fatal overdoses will hit 2,053 — an increase of 26% from the previous year.

“I’m fearful that 2,050 is going to be a conservative estimate,” Hobron said in an interview. She said the number of deaths could reach 2,200.

Of Virginia’s 133 cities and counties, 77 registered more fatal overdoses during the first half of 2020 than during the corresponding period of 2019.

Drug deaths more than doubled in the cities of Richmond and Roanoke and rose 50 percent or more in Newport News, Virginia Beach, Chesapeake and Loudoun and Arlington counties.

Caroline, Charlotte, Goochland and King William counties did not have any fatal overdoses during the first half of 2019. This year, Caroline has had five and the others each have had four.

The increase in deaths did not surprise Ochalek, who recently published an article in the Journal of the American Medical Association about nonfatal opioid overdose visits to the VCU Medical Center emergency department.

Between March and June, the emergency room in downtown Richmond saw 227 such patients — a jump of 123% from the same months the previous year.

Drug overdoses have risen throughout the U.S. during the pandemic.

For example, the federally funded Overdose Detection Mapping Application Program collects data from paramedics, hospitals and police in most counties across the United States. It examined overdose reports, both fatal and nonfatal, from March 19, when states started mandating virus-related safety measures, until May 19.

During that time period, more than 60% “of participating counties experienced an increase in overdose submissions,” the program reported.

Hobron’s report is the first to show how many overdoses resulted in death in Virginia during the COVID-19 pandemic. The rise has been stark: In 2010, Virginia recorded 1.9 fatal overdoses a day. That surged to 4.5 drug deaths a day in 2019. During the second quarter of this year, about seven Virginians died each day from drug overdoses.

Why the pandemic spurred drug overdoses

Social distancing mandated by the pandemic has made it difficult for people in recovery to meet with a sponsor, counselor or support group such as Narcotics Anonymous. Many treatment centers and recovery programs have closed, cut back or moved services online.

“We know for a fact that many people have relapsed and overdosed even after having had 12, 15, 18 years clean because of the social isolation,” said Gail Taylor, who oversees substance abuse prevention for the Virginia Department of Behavioral Health and Developmental Services.

“Not being able to socially engage has increased the risk for use as well as the risk of relapse,” Taylor said.

John Shinholser, president of the McShin Foundation, a Richmond-based nonprofit that serves people with substance use disorders, agreed.

“One thing that helps people in recovery the most is being around other recovery people. So with the COVID restrictions, when all of a sudden you’re not supposed to be around other people, you take away some of the best tools available,” Shinholser said.

“When COVID hit in March, within weeks we had our first suicide from an addict that left a suicide note that he just can’t do the isolation thing.”

Victor McKenzie Jr., executive director of the Substance Abuse and Addiction Recovery Alliance of Virginia, said, “For so many people, their recovery is really anchored on social interactions – those peers, other folks who have been through it, whether it’s recovery groups or 12 steps.” He said the pandemic “kind of cut that lifeline off.”

SAARA and other organizations responded by shifting counseling and other assistance online. “However, that doesn’t always replace that human contact,” McKenzie said.

Besides, Shinholser and Ochalek said, many people in recovery do not have computers or even telephones and cannot Zoom in for counseling or a support group.

The pandemic has had an economic impact, too. As businesses shut down, Virginia’s statewide unemployment rate climbed to 11.2% in April. It has since dropped to 6.2%, but in 65 localities, the jobless rate was still at twice as high as it was a year ago.

Also because of the pandemic, people who use drugs are more likely to do so alone, Ochalek said. If they overdose, “no one’s there to call 911.”

Moreover, nobody is present to administer naloxone, the antidote for an opioid overdose. “So they might be unconscious, and no one’s there to give them that life-saving drug,” Ochalek said.

Another factor is the increasing prevalence of fentanyl, which is more powerful and deadlier than heroin and other street drugs. Drug dealers often lace cocaine and methamphetamines with fentanyl, “which is really alarming,” Ochalek said. People who buy the drugs “don’t even know that they’re using opioids.”

During the first half of 2020, about three-fourths of overdose deaths in Virginia involved fentanyl. Thirty percent of the fatalities involved cocaine; 28%, heroin; 22%, prescription opioids; and 16%, methamphetamines. (An overdose often involves more than one drug.)

As coronavirus cases rise and restrictions on social activities tighten, Shinholser fears that drug overdoses will continue to increase.

“The worst is yet to come,” he said. “This is going to be the worst winter we’ve ever had in our history.”

Resources on drug use and addiction

The Virginia Department of Behavioral Health and Developmental Services is the state agency that helps people with substance use and addiction. The department has a toll-free telephone number — 877-349-6428 — for crisis counseling during the pandemic. It also connects Virginians to community service boards, which provide local assistance.

The state also has created a website called Curb the Crisis, which offers advice for preventing overdoses and treating drug addiction. The site has information about how to get training to administer naloxone, the antidote for opioid overdoses.

The Substance Abuse and Addiction Recovery Alliance of Virginia is an advocacy group for people affected by substance use disorders and addiction. SAARA has recovery groups and information about the “Alive RVA Warm Line” — 833-473-3782.

The McShin Foundation is a nonprofit organization serving individuals and families in their fight against substance use disorders. The group provides a residential program and other support led by people experienced in addiction and recovery.

Narcotics Anonymous has a website listing virtual and in-person meetings in the Richmond area for addicts who wish to pursue and maintain a drug-free lifestyle.

The U.S. Department of Health and Human Services has extensive resources about the opioid crisis, including a helpline (800-662-4357) and an online database of treatment facilities.