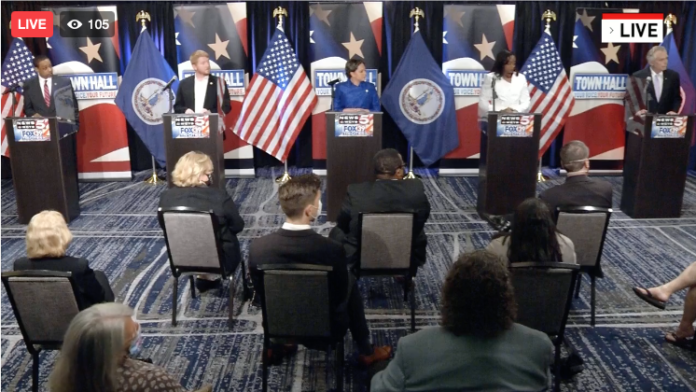 The five Democrats seeking their party's nomination for governor met for their second televised debate Thursday in Bristol. 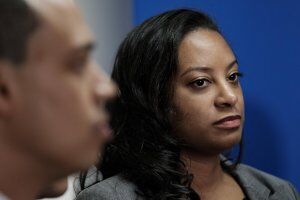 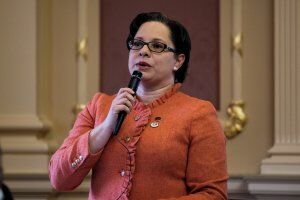 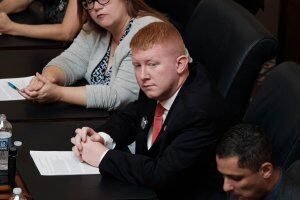 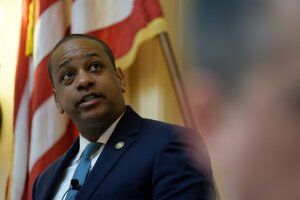 Lt. Gov. Justin Fairfax presides over the Senate on the opening day of the 2020 session of the General Assembly. 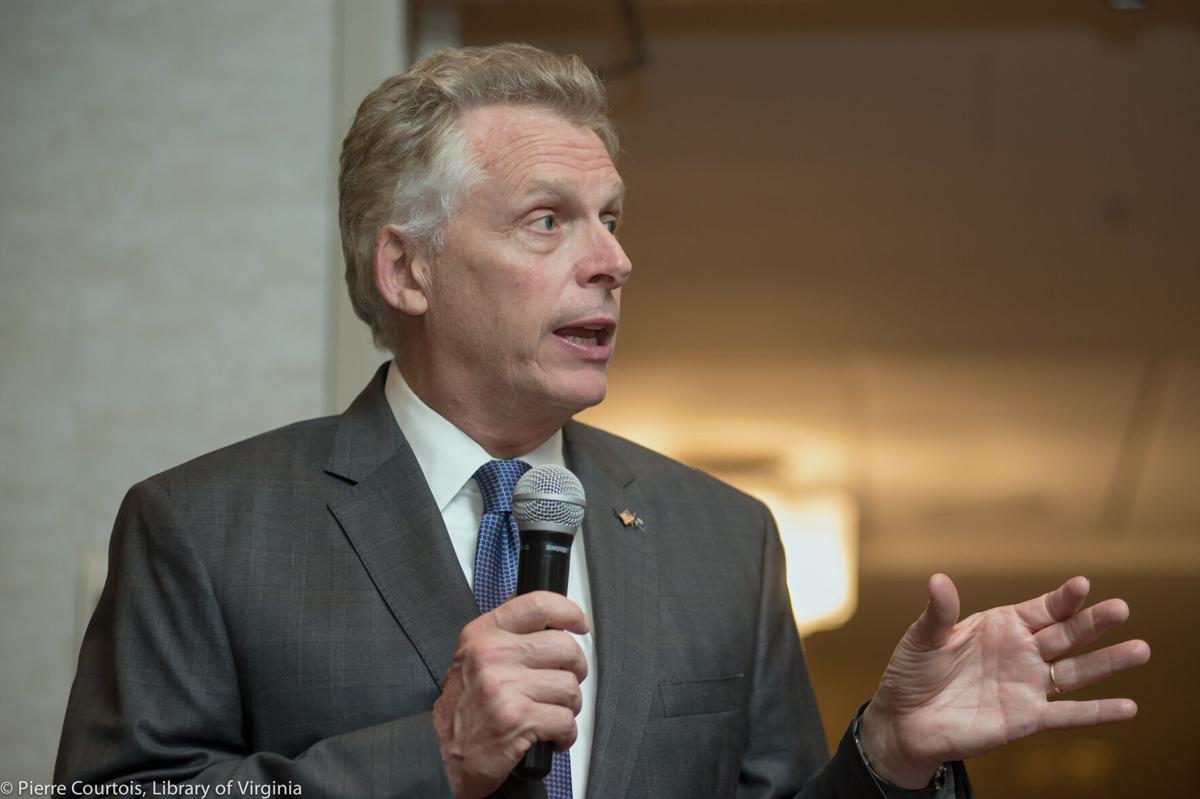 But there didn’t appear to be a single, standout moment that might dramatically alter the dynamics of the race one month out from the June 8 primary. In his closing statement, McAuliffe, a former governor seeking a rare second term in office, signaled he’s already looking ahead to the general election and the coming fight against whomever Republicans nominate for governor at their convention this weekend.

“You look at the Republicans, who they’ll nominate in two days. They’re fawning all over Donald Trump. They’re trying to bring their Trump politics here to Virginia,” McAuliffe said. “We can’t allow it. We’ve got to stop them.”

The hourlong debate held in Bristol and hosted by local TV station WCYB focused on several issues important to Southwest Virginia, including rural broadband access, the transition from a coal-focused economy and anti-poverty plans. The second of four debates sanctioned by the Democratic Party of Virginia also presented a chance for the four candidates running against McAuliffe to try to puncture the aura of inevitability McAuliffe has built through big polling leads, endorsements and fundraising.

Jennifer Carroll Foy, who stepped down from her Prince William County House of Delegates seat last year to run for governor and has pitched herself as the strongest alternative to McAuliffe, was perhaps most aggressive in challenging the former governor, accusing him of being too deferential to police and failing to do enough to lift up places like Petersburg, her hometown.

Saying McAuliffe had chosen to stand by “bad police,” Carroll Foy pointed specifically to the former governor’s refusal to order a state investigation in the 2016 shooting death of Kionte Spencer, an 18-year-old Black man killed by police in Roanoke while carrying a BB gun.

“When the community asked him for help, he chose inaction,” Carroll Foy said. “And he even told the ACLU that he will always come down on the side of law enforcement.”

In response, McAuliffe said he supports “full accountability” for police and tried to clarify his comment on siding with law enforcement.

“That was in regards to license plate readers,” McAuliffe said, referencing his decision to veto a bill meant to limit law enforcement’s ability to conduct surveillance and collect data without a clear connection to a criminal case. “And let me be very clear, I did stand with the police on license plate readers. Because what they do is capture murderers, child molesters.”

McAuliffe noted that license plate readers played a role in the capture of Jesse L. Matthew Jr., who was convicted of killing two University of Virginia students, Morgan Harrington and Hannah Graham. Media outlets reported in 2016 that license plate readers in Louisiana flagged the car Matthew was in before he was eventually captured in Galveston, Texas. Another report at the time said Matthew was captured thanks to a tipster who saw him on a Galveston beach and recognized him from a wanted poster.

Sen. Jennifer McClellan, running largely on her 15-year record crafting policy in the General Assembly, drew on personal experience to speak to certain communities’ fear of police and call for ending qualified immunity, a legal doctrine that can shield officers from civil rights lawsuits.

“I had to have the conversation with my 10-year-old son last week when he asked me, ‘Mommy, someone not that much older than me was killed by a police officer. Could that happen to me?’” McClellan, D-Richmond, said. “And I looked at him and said, ‘I will do everything I can to keep that from happening to you.’ Because there are too many people who call the police for help, and are killed. I had an intern who was in the middle of a mental health crisis, and his grandmother was afraid to call the police because she was afraid that he would be killed. There are too many people who are afraid of the police, and we have to address that problem.”

Carroll Foy also tried to put McAuliffe on the defensive over conditions in Petersburg, which has featured prominently in her campaign messaging. She said her hometown “didn’t feel” the economic success McAuliffe has touted as a hallmark of his first term.

McAuliffe said that when he took office two-thirds of Petersburg schools weren’t accredited. By the time he left, he said, all were fully accredited.

“We provided the resources to lift up the Petersburg community,” McAuliffe said.

Carroll Foy responded by saying Petersburg currently now has just one accredited school. However, state data for the 2019-2020 school year, the most recent year available due to the COVID-19 pandemic, showed Petersburg had one fully accredited school and five schools accredited with conditions, a label used for schools that need significant improvement.

“A predominantly African-American community needed the former governor,” Carroll Foy said. “And he didn’t show up. So where was his big and bold then?”

Del. Lee Carter, a self-described socialist running to the left of the field on issues like corporate power and police budgets, drew a contrast with McAuliffe early in the debate by bringing up the deal Virginia struck with Amazon to bring the company’s planned second headquarters to Northern Virginia. Carter, D-Manassas, noted he was the only candidate onstage who opposed the package of incentives and critiqued the state’s economic development model that he said is too reliant on begging wealthy companies to bring jobs to the state.

“The other four candidates on this stage all supported the Amazon deal,” Carter said. “Which gave $1.8 billion of your money in cash, tax breaks and infrastructure upgrades to a corporation owned by the wealthiest man who has ever lived. I am the only candidate on this stage who will stop that corporate welfare, stop those handouts and put you in charge.”

In response, McAuliffe said he wrote the bid that got Amazon to Virginia amid fierce competition from other states and cities, a project billed as bringing up to 25,000 jobs. He said the state didn’t commit any upfront money and the project will be funded by the project’s own tax revenue.

“That is a very good deal,” McAuliffe said. “But these aren’t statistics. I’m talking about people’s lives. We’re lifting up families.”

Touting his early advocacy for legalized marijuana, Carter also said the state should begin the process of legalizing more drugs and treating addiction as a medical issue rather than a criminal one.

Lt. Gov. Justin Fairfax, who made headlines in the first debate by comparing himself to George Floyd while describing what he called a rush to judgement after two women accused him of sexual assault in 2019, didn’t repeat that performance, sticking mostly to policy-focused answers dealing directly with moderators’ questions.

“For too long we have seen those who are connected and in power forget about those who are struggling every single day to make ends meet,” Fairfax said in his closing statement. “I am proud of the work that we’ve done over the course of the last four years. And I’m even prouder of what we will be able to do together to bring that opportunity to every household here in the Commonwealth of Virginia with your support.”

All five candidates said they would veto any bill designed to ban transgender athletes from participating on school sports teams that correspond to their gender identity.

The candidates will meet for two more debates before the primary, one May 20 and the other June 1.