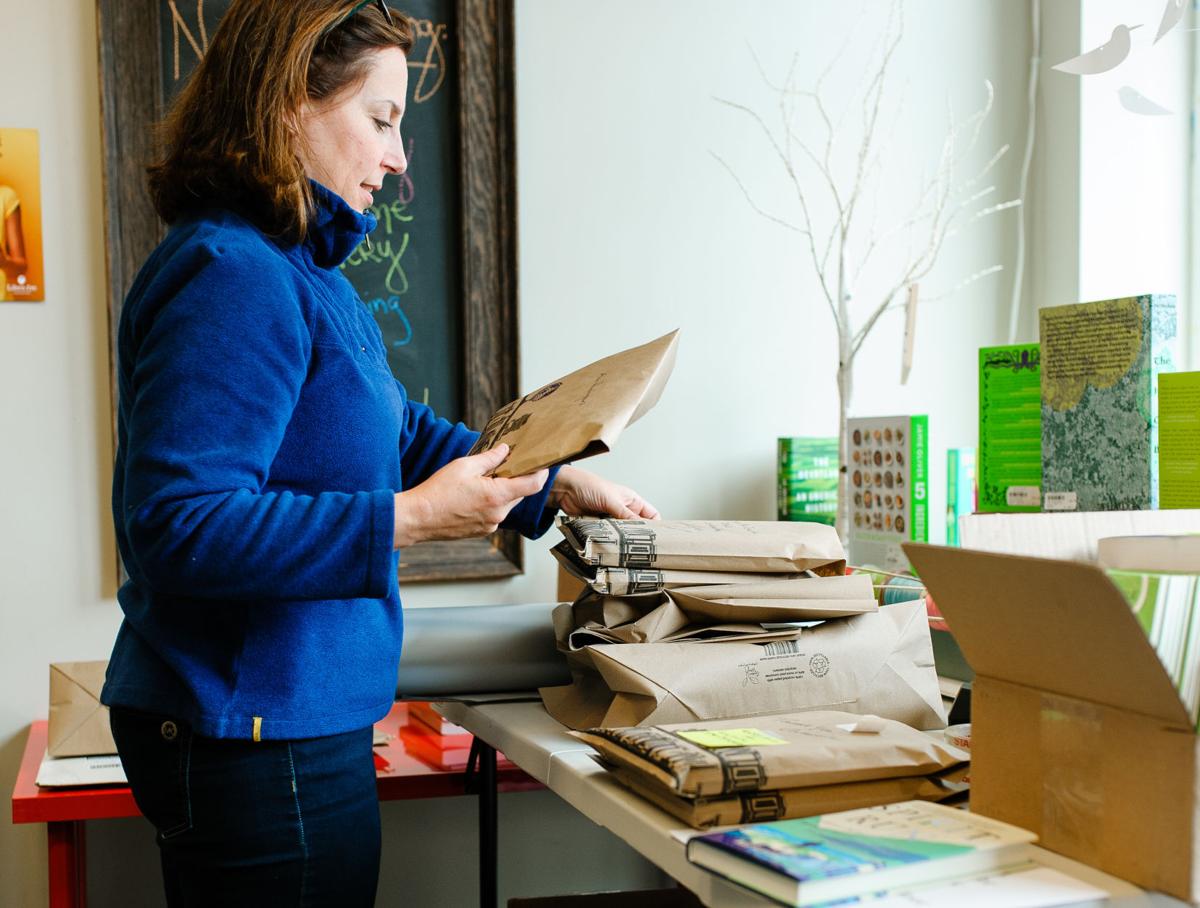 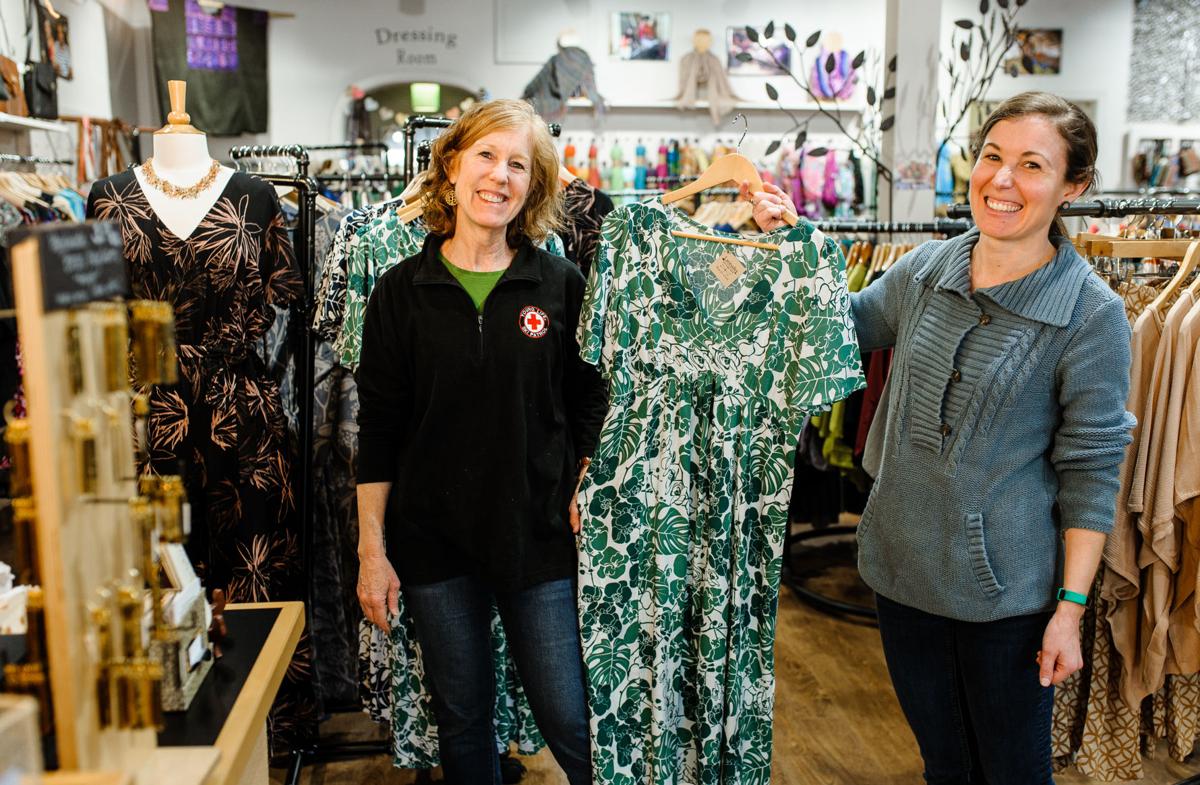 Lee Owsley and Kelsey Neale, both of Latitudes Fair Trade, display one of the spring dresses they hope to sell on their "virtual store."

In many ways the week of March 16 was filled with the promise of spring. Some trees had started blooming along Warrenton’s Main Street. The temperature on Tuesday reached a pleasant 63 degrees. In a normal year, shopkeepers would be gearing up for the influx of customers that normally follows warmer weather.

Instead, the invisible-but-looming threat of the novel coronavirus and its economic impact weighed heavily on business owners trying to determine how to move forward. Fauquier County schools are closed through at least April 13, and health departments at every level of government are urging people to stay at home if they can, leaving business owners uncertain about the level of demand they can expect in the coming weeks.

Shop owners along Main Street are, on the whole, keeping their stores open in one way or another, but the pandemic promises to put a strain on small businesses.

Great Harvest Bread Company, owned by Pablo Teodoro, remains open for take-out orders, but the chairs have been put away. Teodoro said he is also exploring the possibility of offering delivery.

He said that some customers have come to the bakery to order saying “I’m buying something to make sure my favorite bakery stays open,” but that despite the support from loyal customers, “we are in jeopardy right now,” citing a “big drop in business.”

Teodoro said that despite the uncertainty, he was optimistic on a philosophical level about the crisis. “This has united us. We have common goals and fears. We need to realize what the essentials are, the fundamentals of community and life.” At another point he said: “There are many great things that are going to come out of this.”

Some good news did come later that day; an anonymous donor gave $700 for Great Harvest to bake bread for the Fauquier Community Food Bank, whose staff had struggled to fill the pantry’s shelves due to shortages of bread in grocery stores. By Wednesday afternoon, other donations had roughly doubled the original amount, to which the bakery added 20%.

“We, the Great Harvest Crew, thank you as well,” said a Facebook post directed to donors. “By essentially paying us to bake for the Food Bank, you've helped keep us in business during a very uncertain time. We couldn't be more grateful!”

Despite the bright spot in the local news cycle, the fact remained that uncertainty and economic anxiety was a common theme for everyone. Even the good news – donations toward supplying the food bank – was tainted by the fact that the food bank is, indeed, a needed institution.

“We’ve got a great community. They are rallying and they are coming in,” said Zan Dial, of Ellie’s Place, a sandwich shop, but ultimately, he said, “we are just trying to mitigate the damage.”

Some retail stores have begun to experiment with new ways of accommodating customers in this new reality.

Mark Moore, of Framecraft, said the store has moved to a pickup and delivery model, having closed its doors to walk-in customers this week.

While business has slowed down “big time,” he said, “we’re trying new things,” like accepting orders over the phone and home delivery to the Warrenton area. “I took a new framing order yesterday using the new method,” he said. “It was awesome.”

“So far the remote way of doing things has been fantastic,” Moore said later, but added that he is taking things day-by-day.

Lee Owsley, of Latitudes Fair Trade, said that she hoped to keep the store open, but concern for the health of employees and customers prompted her to close the doors temporarily on Monday.

“We have several employees who are caring for older parents – that’s what really prompted the discussion,” she said, explaining that reducing potential exposure for those most vulnerable to the virus was her top concern.

Owsley and her daughter, Kelsey Neale, said that they are concerned especially with moving their stock of spring clothing; clothing sales, they explained, are very specific to certain season. On Tuesday, Latitudes announced a “virtual store” on their Facebook page, offering direct shipping to customers.

The Bike Stop is still open to customers, although the business is adapting to the new economic climate, said owner Bob Leftwich, explaining the shop will soon offer free pickup and delivery for bicycle service along with curbside pickup.

“We’re just going to keep moving forward as always,” he said, referencing the other economically troubled times the store has survived in its 36 years. The coronavirus outbreak is “probably a little bit different” than those past downturns, he added, but he is confident that business will ultimately rebound. “Eventually people are going to want to go out and do things again,” he said.

Shelf Life staff, said owner Lois Moore, are taking this time to work on long-term projects, like setting up an online store, using the drop in the number of customers to “think outside the box and be creative.” The store remains open, and Moore said she has received a number of orders by phone.

“We don’t want to cave to the hysteria,” she said, adding it was also important to be “very careful” to protect staff and customers. “We’re just hunkering down and trying to move forward.”

Cammie Fuller, of Old Town Open Book, said that while the store is closed to walk-in customers, “a lot” of orders have come in online and by phone. The independent bookstore is offering curbside pickup and home delivery, which she said has kept her “very busy.”

Fuller has also starting a letter-writing program for those stuck at home during the outbreak. “Home alone? Send us a letter,” said a March 16 Facebook post accompanied by a photograph of the store’s staff. “No kidding. We'll reply. Hagrid the Bear (the store’s oversized stuffed teddy bear) will write to your kiddos but loneliness is a real thing and we're in this together.”

“I’ve paid my rent for this month and we’ve gotten enough in to pay next month,” Fuller said, adding that that as long as the store is open “we’ll try to help the community in one way or another.”

She also spoke to the uncertainty surrounding the outbreak and its effect on business. “I don’t see an end in sight right now.”