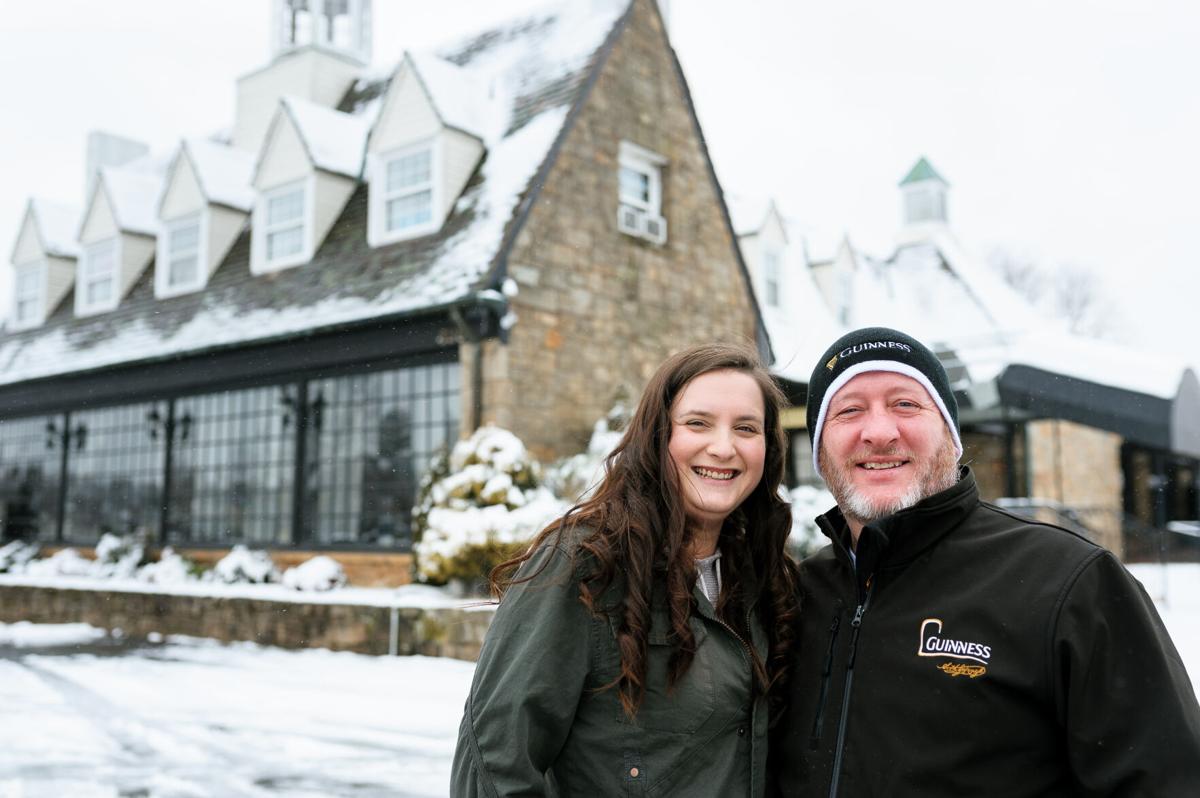 Amanda and Jerry O’Brien outside the former McMahon’s Irish Pub in Warrenton -- the future home of O’Brien’s Irish Pub. 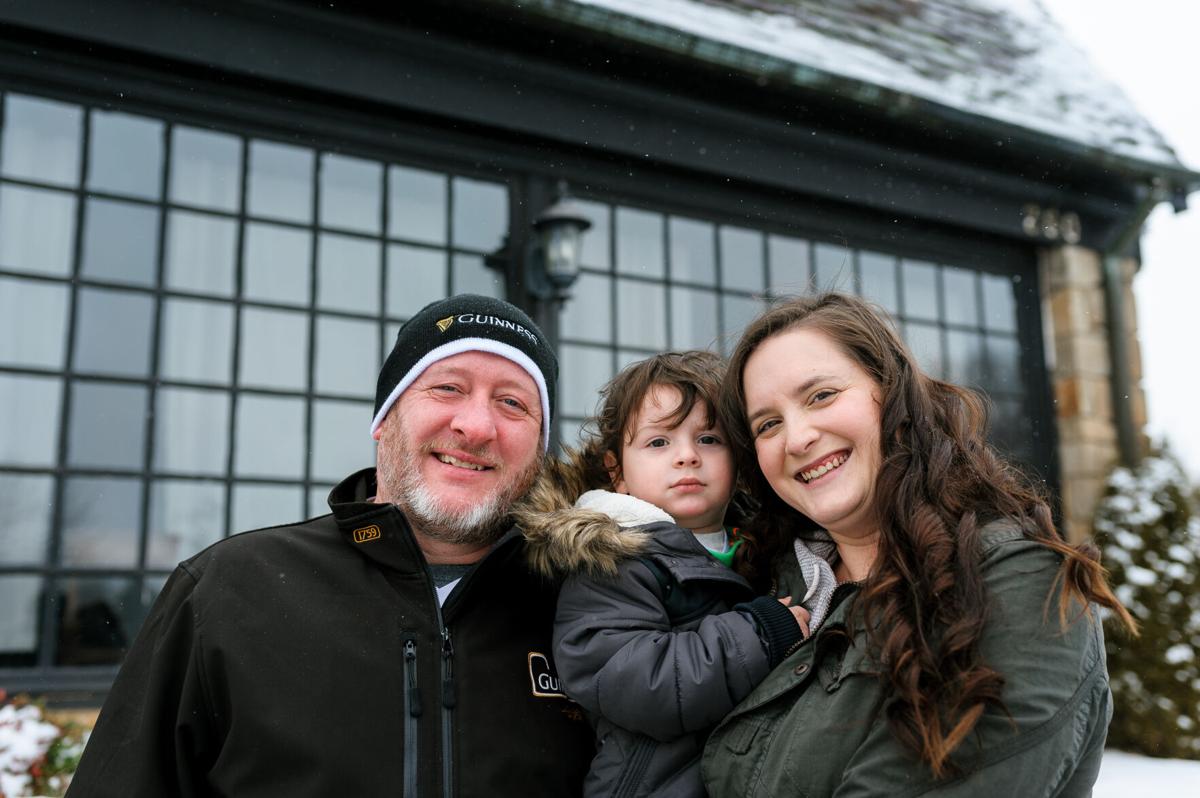 Jerry and Amanda O'Brien with their son, Cían 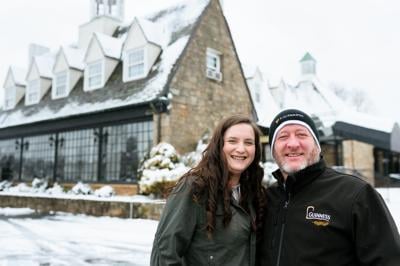 When the Piedmont countryside begins to turn Kelly green, Fauquier County residents will be tucking into Irish lunches and dinners with an accent on farm-to-table ingredients. The background “music” will be a lyrical Irish brogue heard around the dining room.

The location of the gustatory experience will be the former McMahon’s Irish Pub and Restaurant at 380 Broadview Ave. in Warrenton. The decades-old building has solid bones, so freshening up the interior is currently job one for the town’s newest entrepreneurs.

If it seems a tough time to jump into the restaurant business, years of international and domestic experience are in play here.

Co-owners Jerry O’Brien, 45, and his wife Amanda, 33, have traveled widely since embarking on their separate hospitality careers. Among his long list of accomplishments, O’Brien managed country singer Toby Keith’s restaurant in Las Vegas.

The Irish personality is widely known for its ever-ready smile and friendly disposition. Why? A case could be made that growing up in one of the most beautiful countries in the world creates an ebullient life view.

In Jerry O’Brien’s case, his birthplace was a small village on the Ring of Kerry, a must-see destination for international vacationers. Its beauty is renowned.

His life’s work life began at age 12 at a local bakery, shifting to a hotel in Killarney as a night porter and then night manager. Subsequently, he moved on to another hotel in the town before relocating to Las Vegas to join a pub concept group that ran several Irish pubs in America.

His role was troubleshooting restaurants that had management issues. Assignments included Indiana, Washington, D.C. and even back in Dublin.

Meanwhile, Amanda O’Brien, born and raised in Manassas, started her career at upscale Virginia golf clubs, then moving to a Charlotte, N.C. restaurant, advancing from server to banquet manager. She landed a job in Las Vegas with the same company her future husband worked for.

“That’s how Jerry and I ended up meeting,” she said. A move back to Virginia offered the two professionals a chance to lease the former McMahon building. "Jerry will be the general manager, and I will cover catering and bar management.”

During his six-year stint in Las Vegas, Jerry O’Brien was offered a job at Toby Keith’s restaurant in Harrah's. Within six months, he was promoted to general manager, a position he held for more than two and a half years.

The decision to move back to Virginia was prompted by the birth of the couple’s son. “We didn’t think Vegas was a great place for our son to grow up,” underscored Jerry O’Brien.

Upon arriving here, he was hired as the manager at Harry’s at Airlie for two months. Then, Covid-19 struck.

Once back in Virginia, the couple explored Warrenton and quickly spotted the building they ultimately leased. Amanda O’Brien said, “As we drove past McMahon’s the first time, we looked at each other and said it would be a perfect spot for a pub. We’ve always had a dream of opening a place together.”

The O’Briens have a five-year lease with a five-year option. Their goal is to buy the property outright.

Currently, an interior facelift is underway, including brightening the bar area and showcasing its beautiful wood. The building holds 267 people but upon opening in April will be operating under COVID-19 restrictions at limited capacity. An outdoor patio will also be available with picnic tables for folks who feel safer dining out-of-doors.

Negotiations are underway with a chef emphasizing locally produced fare. It will be an Irish menu featuring products from local farms.

Dishes such as shepherd’s pie; beef and Guinness stew; fish and chips, bangers and more will be showcased. Some Irish meats will grace the menu too, including bacon and sausage imported from the Emerald Isle.

Initially, there will be 25 employees, including, hopefully, some Irish natives. But finding the best servers will be paramount. "Our service standards will be really high,” explained O’Brien.

The pub will be open seven days a week for lunch and dinner. Final operating hours have yet to be set. Hopefully, business will justify breakfasts on the weekends, and if that’s successful, three meals a day would be offered throughout the week.

Entrees will be priced in the $15 to $17 range and up to $25 for dishes featuring local meats like pork chops and steaks. Beer is a given; 12 taps will sport both traditional Irish beers and local craft brews. Domestic and local wines will also be on the drinks list.

COVID-19 restrictions will dictate final hours, but the goal will be to be open from 11 a.m. to 2 a.m.

The Irish Sessions band, who previously played at McMahon’s, will return as well. They are eight talented musicians showcasing jigs, reels and hornpipe tunes.

The O’Briens are also committed to supporting the community and anticipate hosting golf tournaments and other fundraisers. “Around Thanksgiving and Christmas, we're going to see if we can feed some of the less fortunate folks in our community,” said O’Brien.

If it’s true everyone has a wee bit of Irish in them, look for glasses to be raised high in affirmation at O’Brien’s.

This is great news and welcome to the community! All the very best to you from another local business owner!