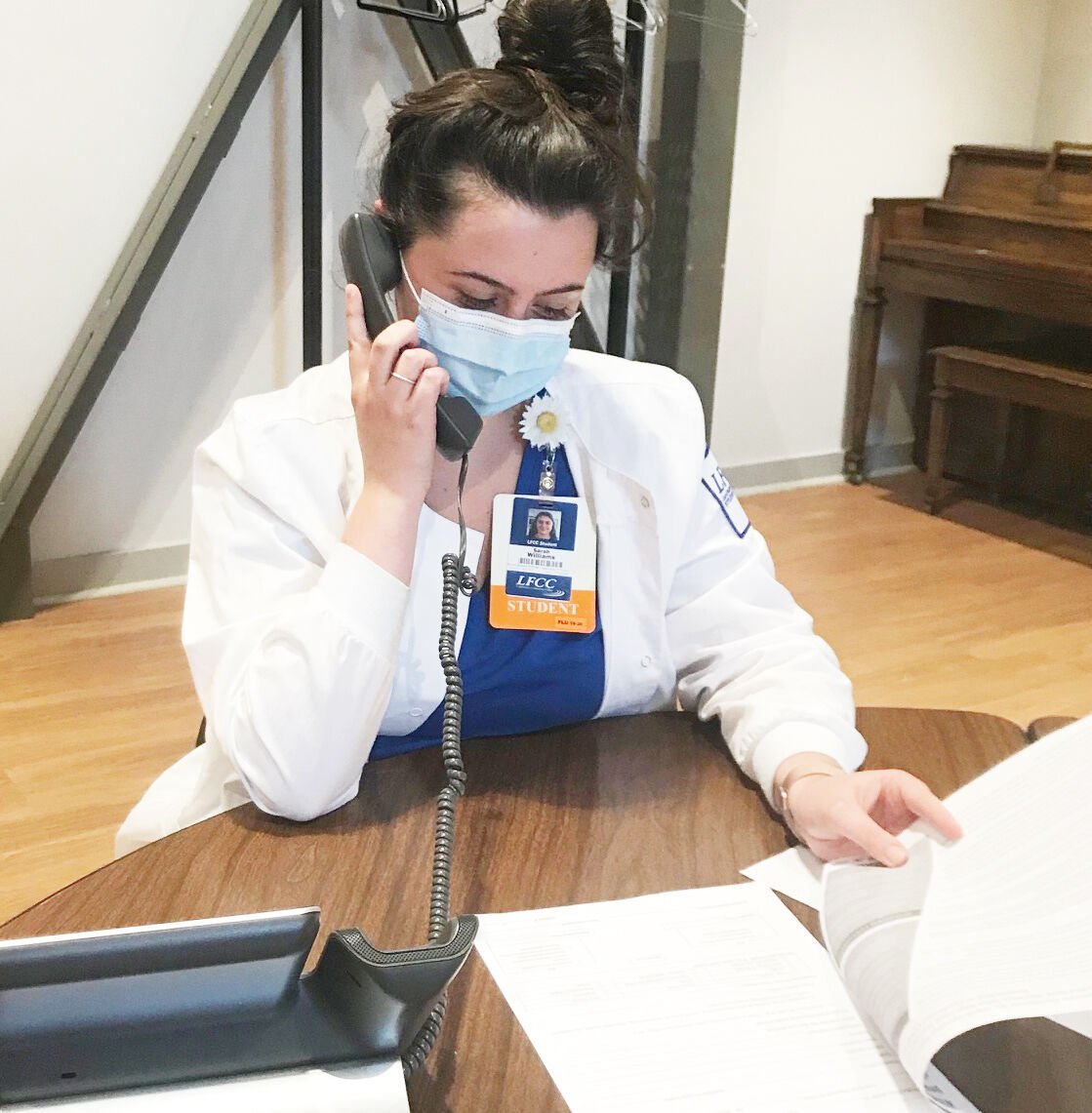 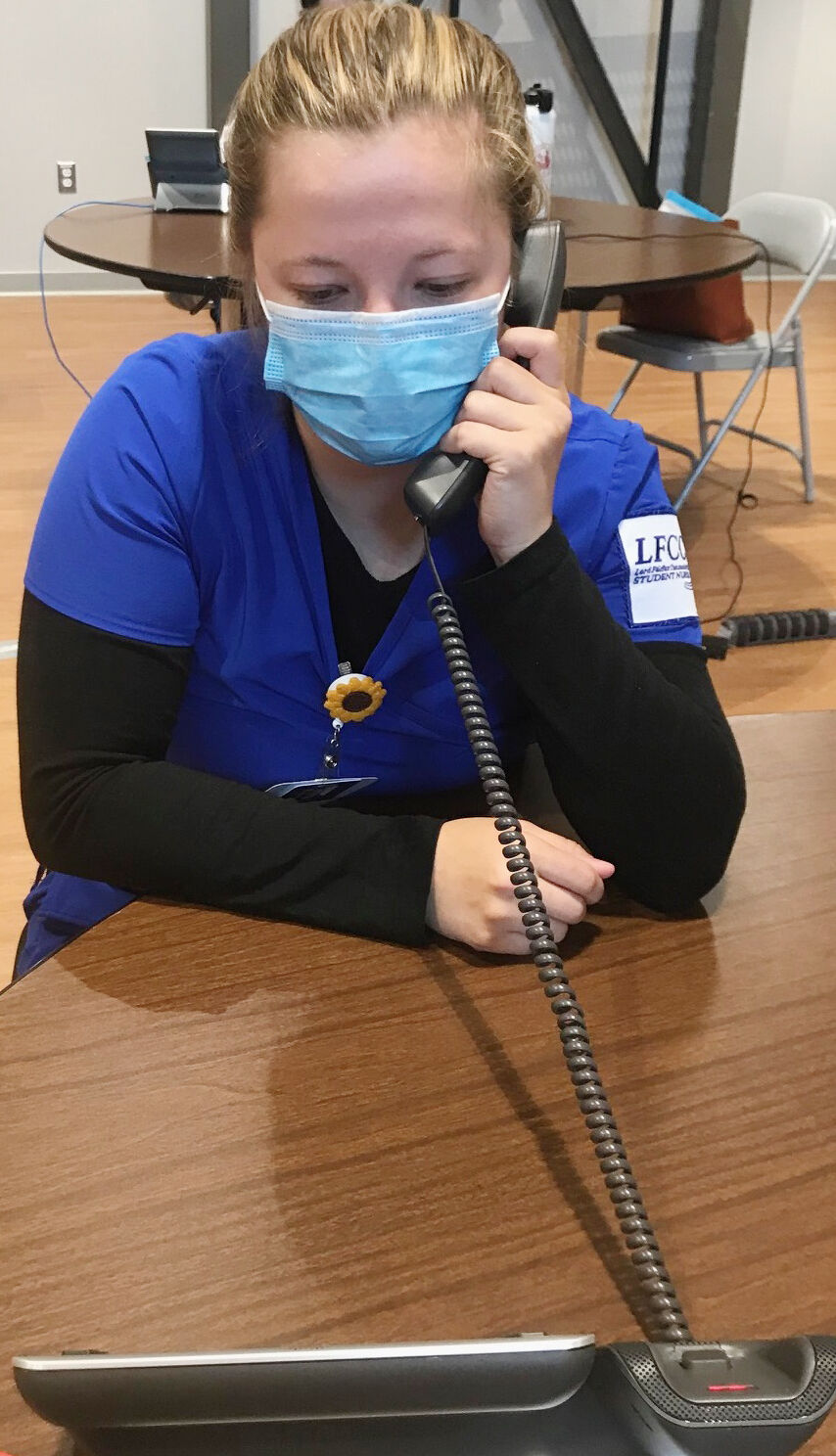 Ruby Fridley volunteers as a contact tracer at The Barn on the Fauquier campus of Lord Fairfax Community College. 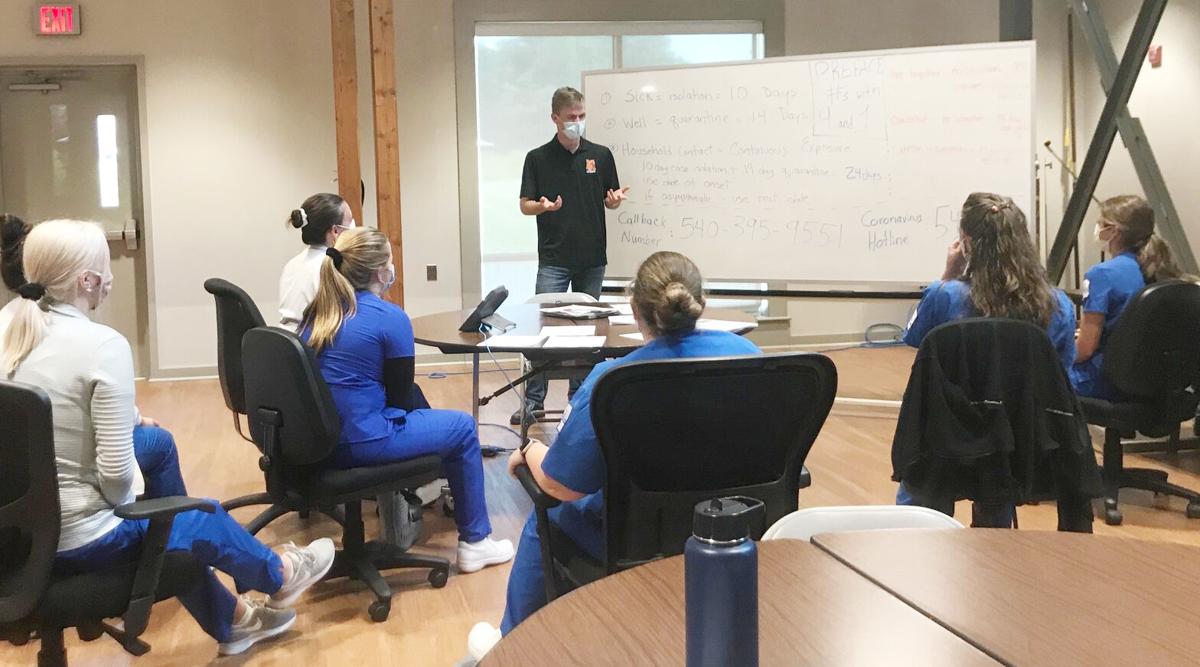 The volunteer contact tracers gather inside The Barn on the Lord Fairfax Community College's Fauquier campus. 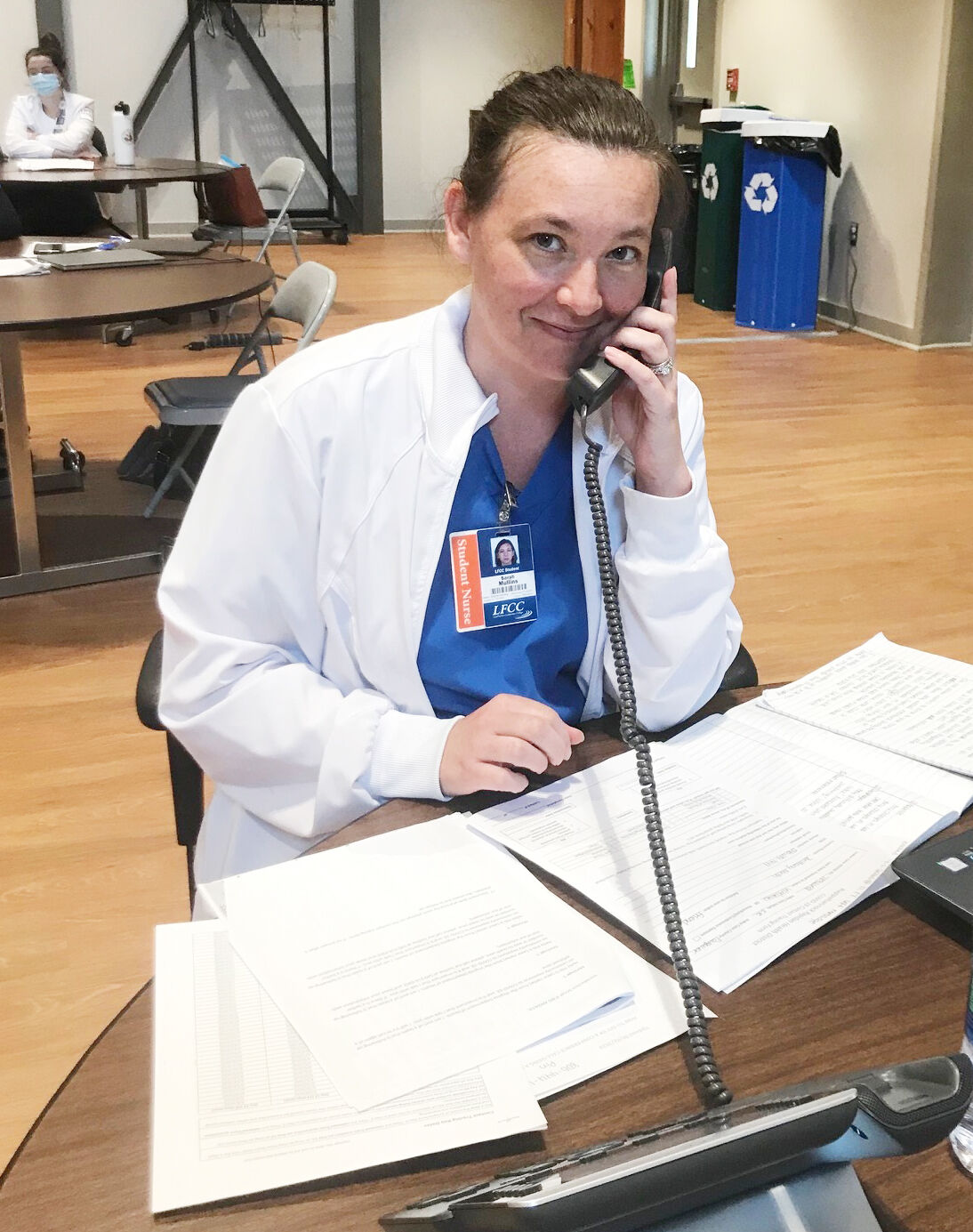 Sarah Williams makes a call inside The Barn while volunteering as a contact tracer. 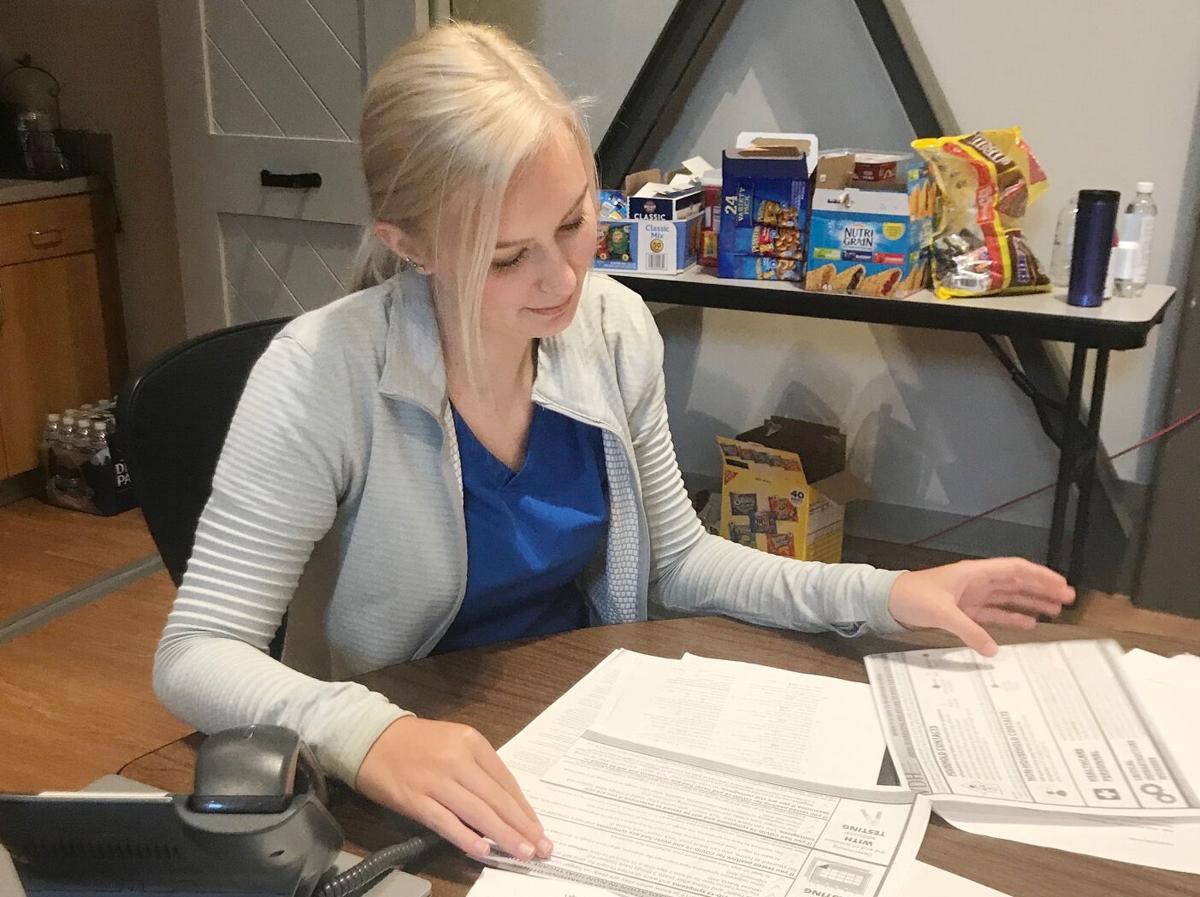 Andrea McAlistar volunteers as a contact tracer at The Barn, an auditorium on Lord Fairfax Community College's Fauquier Campus. 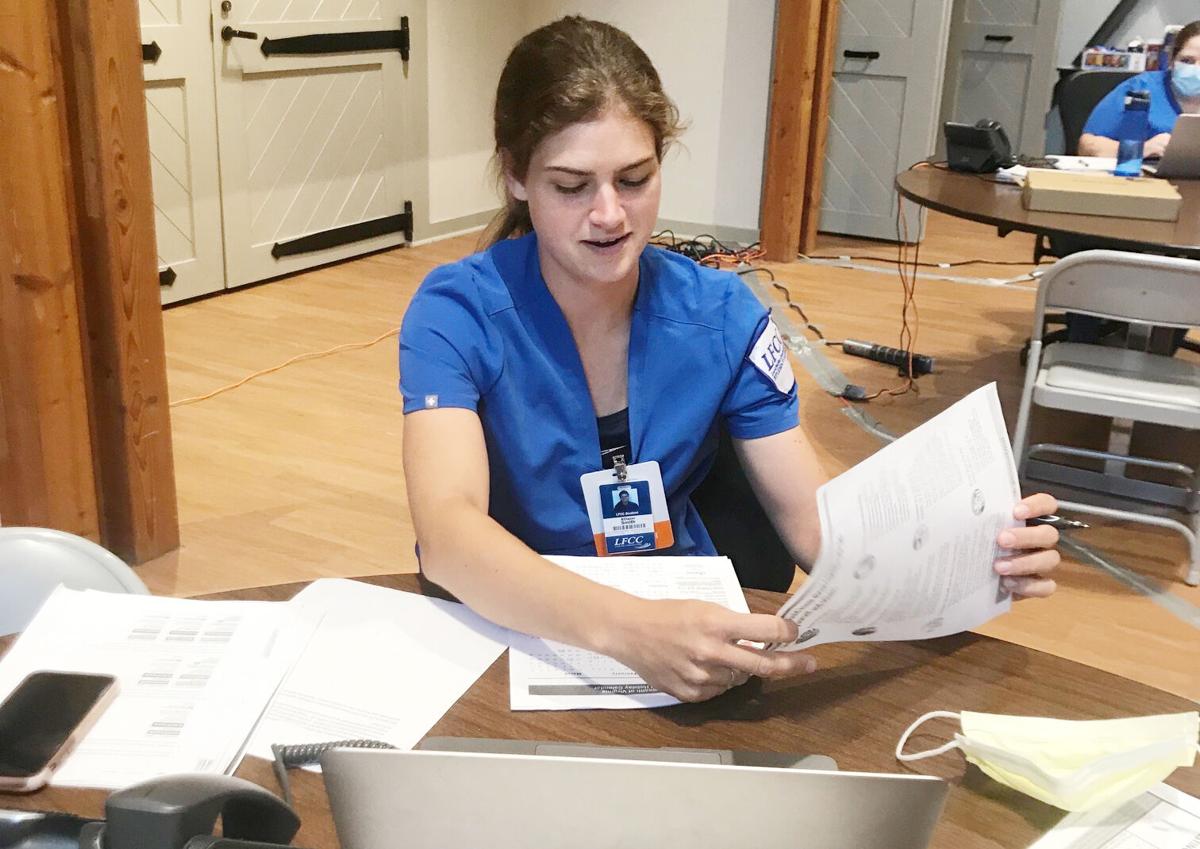 Allison Smith waits to make a call inside The Barn, volunteering as a contact tracer for the Rappahannock Rapidan Health District.

Ruby Fridley volunteers as a contact tracer at The Barn on the Fauquier campus of Lord Fairfax Community College.

The volunteer contact tracers gather inside The Barn on the Lord Fairfax Community College's Fauquier campus.

Sarah Williams makes a call inside The Barn while volunteering as a contact tracer.

Andrea McAlistar volunteers as a contact tracer at The Barn, an auditorium on Lord Fairfax Community College's Fauquier Campus.

Allison Smith waits to make a call inside The Barn, volunteering as a contact tracer for the Rappahannock Rapidan Health District.

Teena Stevic, a second-year nursing student at Lord Fairfax Community College, was just days from her start date at the Fauquier Free Clinic when she received word it would not be accepting student volunteers for clinical rotations in light of the novel coronavirus pandemic.

But despite the initial disappointment, Stevic still had the opportunity to promote the health and well-being of her neighbors this summer, while earning some of the clinical hours she needs to graduate next May. She did so from a phone bank inside the Barn at the community college’s Fauquier campus, rather than at a hospital or doctor’s office.

For nine weeks, Stevic and dozens of her Lord Fairfax classmates worked alongside nursing students at George Mason University to serve as contact tracers for the five counties included in the Rappahannock Rapidan Health District. They juggled calls to residents who had been exposed to people who had tested positive for the virus and provided them with guidance for keeping themselves and their families healthy.

“Positivity and hope and a sense of community is very, very important when you have been diagnosed with a disease such as COVID,” Stevic said. “Because of the media and the hype, you’re just really scared. In the beginning, it was almost kind of a death sentence, and it’s really not.”

Planning efforts for the contact tracing operation started back in April, when a George Mason faculty member reached out to Amanda Brooks, the clinical coordinator at Lord Fairfax’s Fauquier campus, and connected her with the state’s health department. The health department hoped to have its own contact tracing system up and running by August, Brooks said, but needed help in the meantime as the state re-opened.

Besides giving the department time to get organized, the local contact tracing operation also gave nursing students the chance to participate in a crucial public health effort, Brooks said.

“When you take care of somebody in the hospital, you may or may not know anybody who has ever had whatever kind of disease it is,” Brooks said. “Where coronavirus, it’s affected everybody in one way or another.”

To volunteer as a contact tracer, students had to sign up for the Medical Reserve Corps of Virginia — a squadron of volunteers who respond to public health emergencies — and complete several training modules. They were also provided with detailed scripts, walking them through whether to tell a person to isolate or to quarantine.

Volunteers worked for a maximum of three days between June 1 and July 31; they earned up to 24 hours toward their total of 500 hours required to graduate.

Student volunteers also helped connect residents with county resources, should they need help with childcare or getting groceries if they had been told they should quarantine.

Although Stevic has heard stories of contract tracers being yelled at by people skeptical about the virus or suspicious of their intentions, she said she never experienced anything but kindness during the three days she worked as a volunteer in June. “I had really intelligent conversations with people asking me really good questions,” she said.

She especially enjoyed sharing advice with people about ways to care for themselves during quarantine — self-care tips like getting eight hours of sleep and drinking enough water. And, she said, the same tactics she uses to get her seven children to pick up the phone worked well with those who didn’t want to answer an unknown phone number.

“I did a trick that I employ as a parent: I call, and you don’t answer. I call back, let it ring twice, hang up, call back, and — oh my goodness, you pick up!” she said, with a laugh.

Jennifer Humphries, another second-year nursing student, expressed gratitude for having a role in fighting the pandemic.

“Being able to provide care to individuals who were directly impacted by the coronavirus was a very humbling experience,” she said, especially since being a contact tracer allowed her to help Fauquier residents beyond ensuring that they were in compliance with the national mandates.

Over the three days Stevic spent volunteering at The Barn, she estimates she made 30 or more calls. But the work came in waves, she said: “You sit there, and then boom, you’re really busy and you’re thinking, ‘Oh my gosh, I’m never gonna get all this done.’ And then, you sit and you wait.”

During those slower periods, Brooks said she and an epidemiologist who was stationed at The Barn gave mini-lectures and handed out worksheets reviewing concepts they’d have to know as their studies continued the next semester.

Brooks said she also tried to tell the students each day about how important their efforts were to suppress the spread of the virus. Each call may stop somebody who had been exposed to the virus from visiting grandma, or a newborn baby or someone else who is vulnerable to the virus, she said.

“People don’t realize that it’s not about them. Yeah, if you catch it, you’re probably going to be fine,” she said. “It’s not you so much we’re worried about — it’s the people you might spend time with, that you don’t realize are immunocompromised . . .  It’s time to slow the spread down and hopefully prevent people from getting sick.”

Angela Roberts is a summer intern from the University of Maryland’s journalism school. Her internship was made possible by the Piedmont Journalism Foundation and the John S. and James L. Knight Foundation.