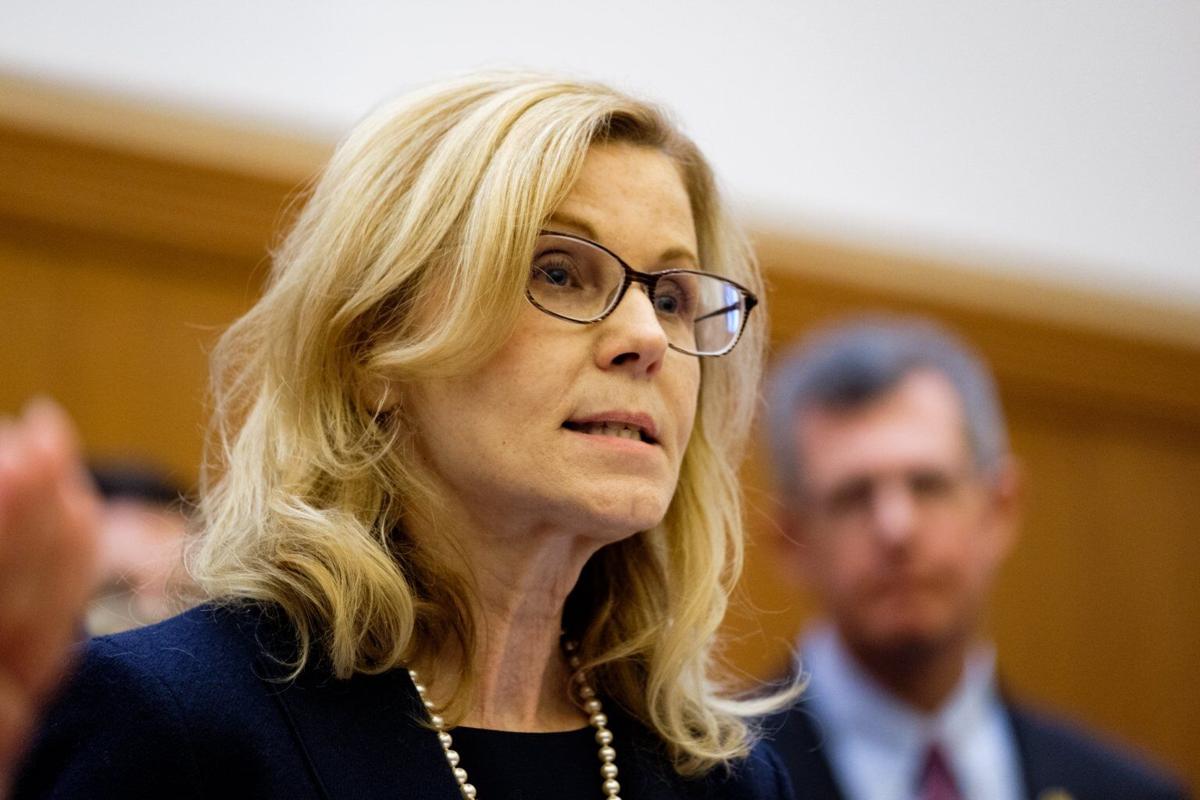 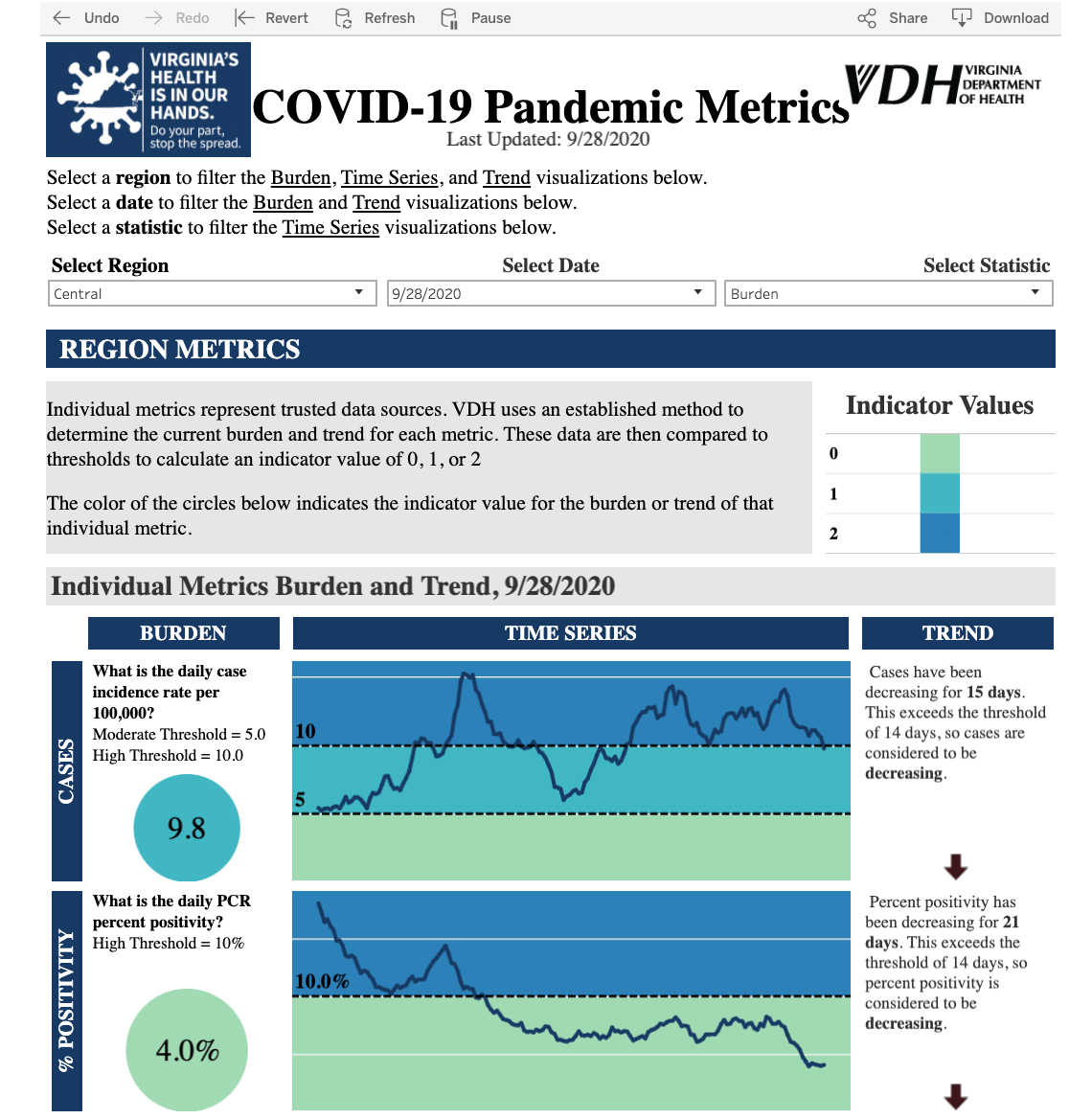 The Virginia Department of Health released a new pandemic metrics dashboard that aims to provide a better picture of how COVID-19 is spreading regionally.

As schools begin to reopen for in-person instruction and the state gradually relaxes COVID-19 restrictions, the Virginia Department of Health is launching a new dashboard it says will help guide decision-making by local governments.

The pandemic metrics data aims to assess the burden of disease by displaying eight different statistics commonly used to evaluate how quickly COVID-19 is spreading through a community. Those include the daily rate of new cases per 100,000 residents and the percentage of PCR tests that come back positive — a measure that’s often used to judge the amount of testing being conducted and the scale of the spread.

Currently, those metrics are displayed by region, not locality, which limits the ability of local officials to gauge the impact of COVID-19 on a particular city or town. But the department is also compiling indicators that the federal Centers for Disease Control and Prevention says can be used to guide school reopening decisions across the country.

State health officials say that data — which is available at the local level — can “help communities better understand the risk of introduction and transmission of COVID-19 in schools.”

“The data that we’re showing are not intended to be a forecast,” state epidemiologist Dr. Lilian Peake said in a presentation on Monday. “They really are available to take within the context of the local setting to understand what steps they need to take to reduce transmission of the virus.”

For the first time, the department also added a more detailed breakdown of COVID-19 in school settings, with a tally of outbreaks — defined as at least two lab-confirmed cases — and total case counts within child care facilities, K-12 schools and colleges and universities.

VDH launched a statewide dashboard within the first few weeks of the pandemic, but the agency has been criticized for frequent changes in how it displays key metrics — including an early decision to sweep antibody test results into its total COVID-19 testing count — and the initial availability of local data.

Local metrics, specifically, have become fodder on both sides of the political aisle. In May, Richmond Mayor Levar Stoney pushed back against Gov. Ralph Northam’s announcement that the city could proceed into the first phase of reopening, revealing that VDH hadn’t provided locality-specific data on percent positivity rate.

The state’s dashboard now includes testing numbers and percent positivity by health district, along with case, hospitalization and death counts by locality. But Republican lawmakers have argued that VDH metrics, which provide cumulative tallies since the start of the pandemic in Virginia, don’t provide a clear picture of the risk in individual communities.

During the ongoing special session, state lawmakers unanimously passed a bill from Sen. Siobhan Dunnavant, R-Henrico, which requires the department to provide weekly case counts by health district — broken down by race and ethnicity and into more specific age groups — and the percentage of cases within congregate facilities such as state prisons and nursing homes.

“We know that most of the cases in Virginia have been in congregate living,” Dunnavant said during a committee hearing earlier this month. “So, when we just keep seeing numbers reported in a continuous bucket, it’s very hard to understand how that affects the risk for your children and your family.”

VDH first created its pandemic metrics dashboard in June — information that Peake said was shared with local health departments — but decided to release it publicly after federal health officials announced their own K-12 school metrics. “These are more technical dashboards, but we wanted to put it out there because the CDC thresholds are public-facing and we want people to understand what’s going on in Virginia,” Peake added on Monday.

But the state is tabulating its data slightly differently than the CDC, which calculates percent positivity and the rate of new cases per 100,000 over the last 14 days. VDH calculates both those numbers daily and displays historical trend lines.

Peake said the state’s analytics are in a trial phase until Oct. 14 — time the agency will use to evaluate the differences between state and federal metrics and decide whether to make its data more consistent with the CDC’s.

“What this tool tries to do is pull some of this information together so you have a more comprehensive picture,” she added. “There’s just not one metric that can be perfect — you have to look at a number of different metrics, and they all have strengths and they all have limitations.”

Between Oct. 18 and 24, Virginia reported 60 new COVID-19 outbreaks, the highest number of outbreaks in one week since the beginning of the pa…