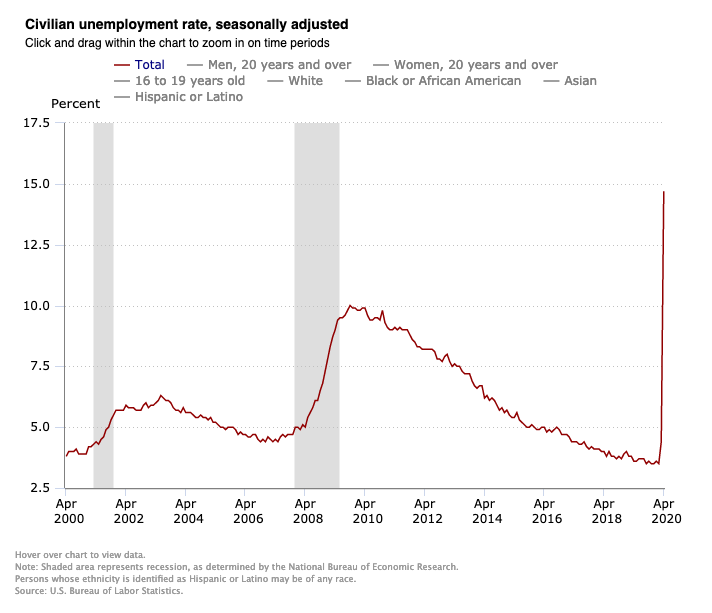 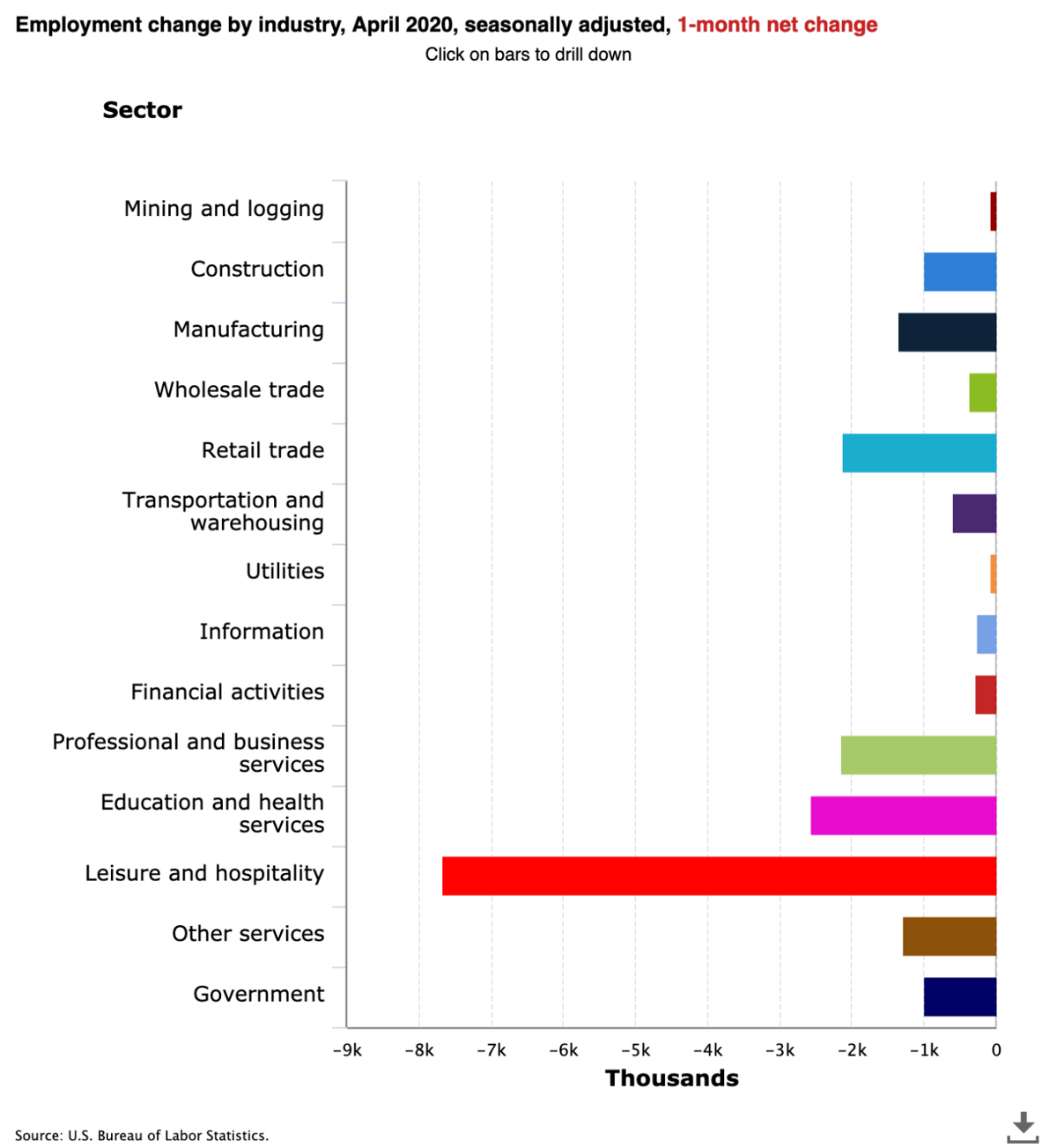 Amid the economic fallout from the novel coronavirus pandemic, total non-farm payroll employment fell nationally by 20.5 million in April; 14.7% of workers are now classified as unemployed.

April's unemployment rate is the highest since 1948, when seasonally adjusted statistics began to be recorded. The new data is according to a Friday, May 8, press release from the U.S. Bureau of Labor Statistics.

On Thursday, May 7, the Virginia Employment Commission released the latest statistics on cla…

Before April’s numbers were announced, the highest unemployment rate for any month since 1948 was measured in November and December 1982, at 10.8%, at the end of a 17-month recession. Following the end of the Great Recession, which lasted officially from December 2007 to June 2009, the unemployment rate peaked at 10.0% in October 2009.

The unemployment rate recorded during the first half of March – before massive layoffs began - was 4.4%. The press release noted that the increase in April was “the largest over-the-month increase in the history of the series” dating back to 1948.

The majority of workers – 18.1 million - counted as unemployed in April had been temporarily laid off from their jobs, ten times the number from March. Permanent job losses stood at 2.0 million in April, up from 544,000 in March.

An additional 9.9 million people are not in the labor force but currently want a job, the press release said, explaining: “These individuals were not counted as unemployed because they were not actively looking for work during the last four  weeks or were unavailable to take a job.”

Some workers who were “absent from work” were still being classified as employed, the press release said, meaning the unemployment rate could have been higher.

“If the workers who were recorded as employed but absent from work due to 'other reasons' (over and above the number absent for other reasons in a typical April) had been classified as unemployed on temporary layoff, the overall unemployment rate would have been almost five percentage points higher than reported (on a not seasonally adjusted basis),” the press release said.

“However,” it continued, “according to usual practice, the data from the household survey are accepted as recorded. To maintain data integrity, no ad hoc actions are taken to reclassify survey responses.”

The labor force participation rate – the combined total of the number of employed people added to the number of people who are unemployed but looking for a job, divided by the total population aged 16 years and over – decreased 2.5% in April and now stands at 60.2%, which is the lowest rate since 1973.

The household survey, which along with a survey of firms is the basis for the BLS employment calculations, was conducted from April 12 through April 18.

Employment statistics for May will be released on June 5. 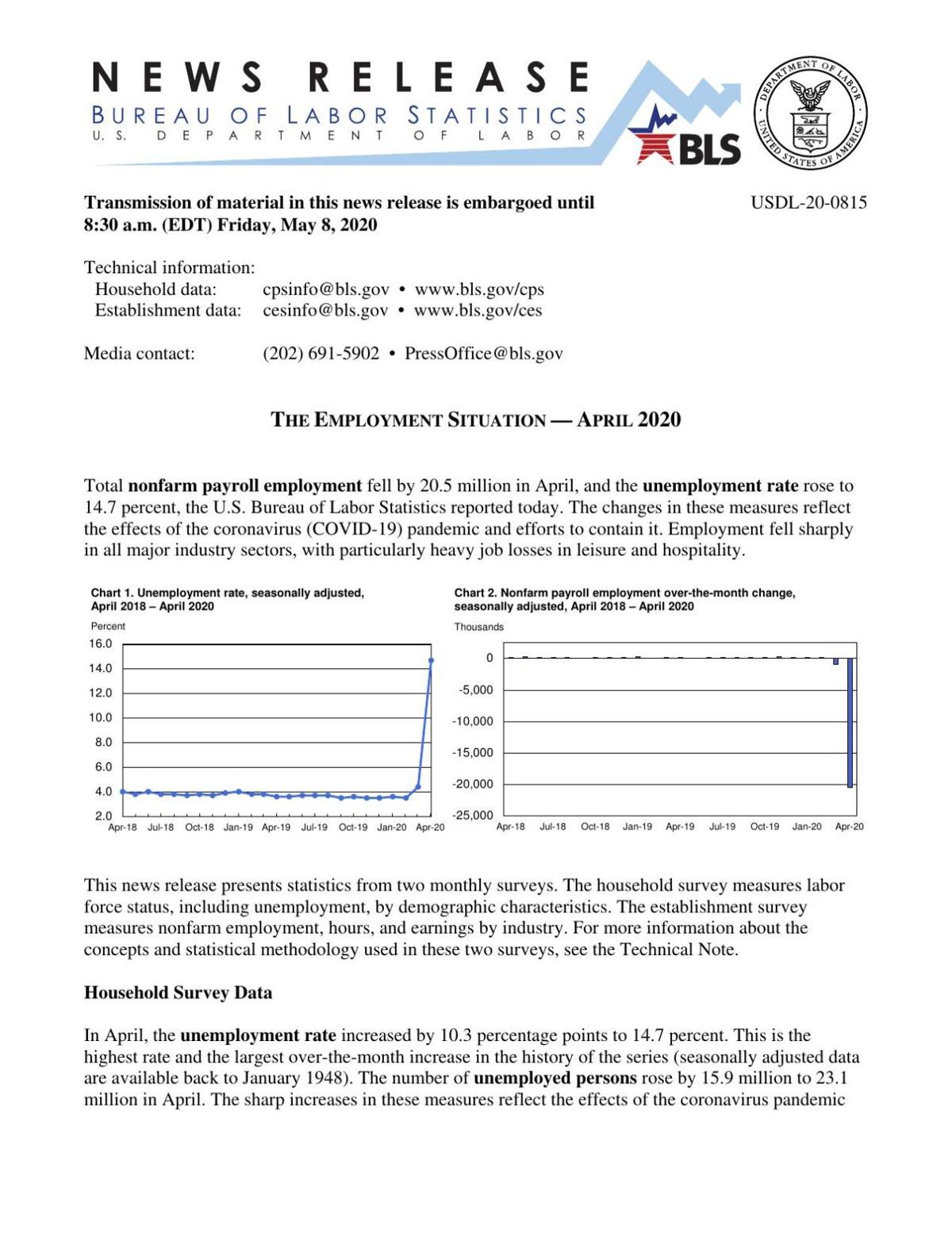 In April, the seasonally adjusted unemployment rate in Virginia, while still historically high at 10.6%, was significantly lower than the nati…