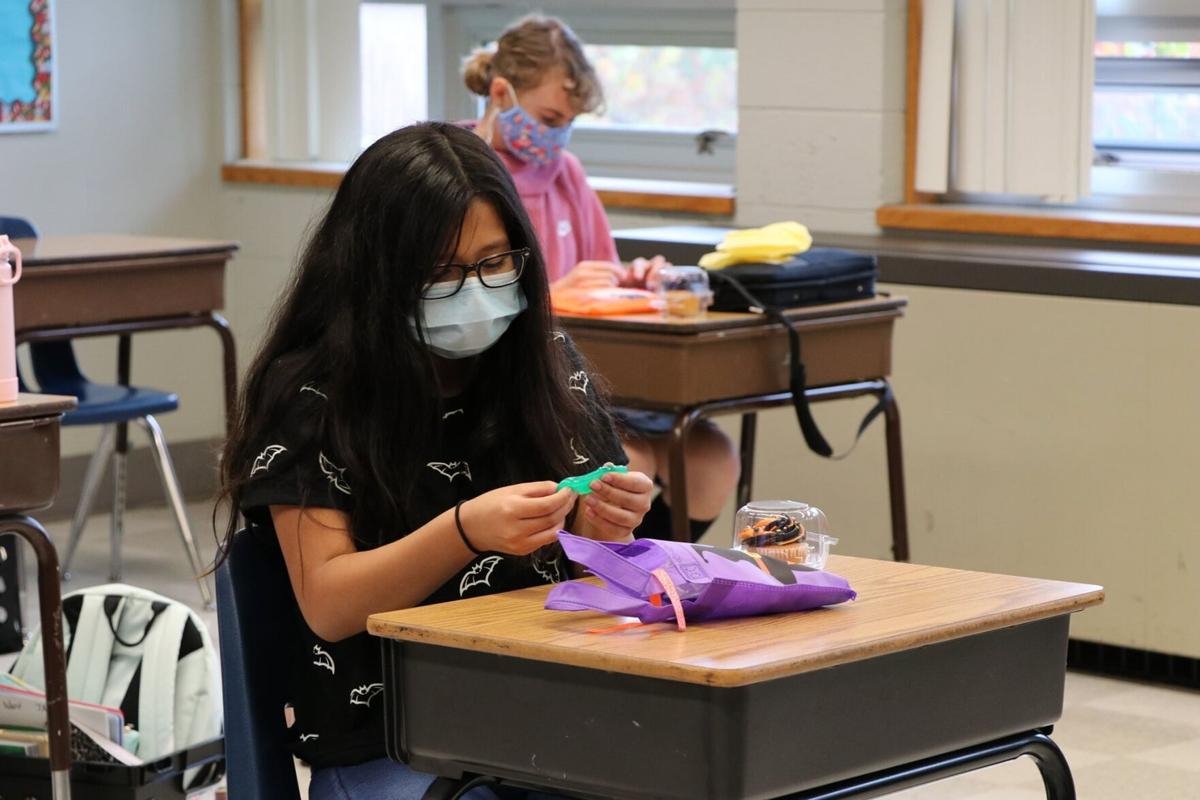 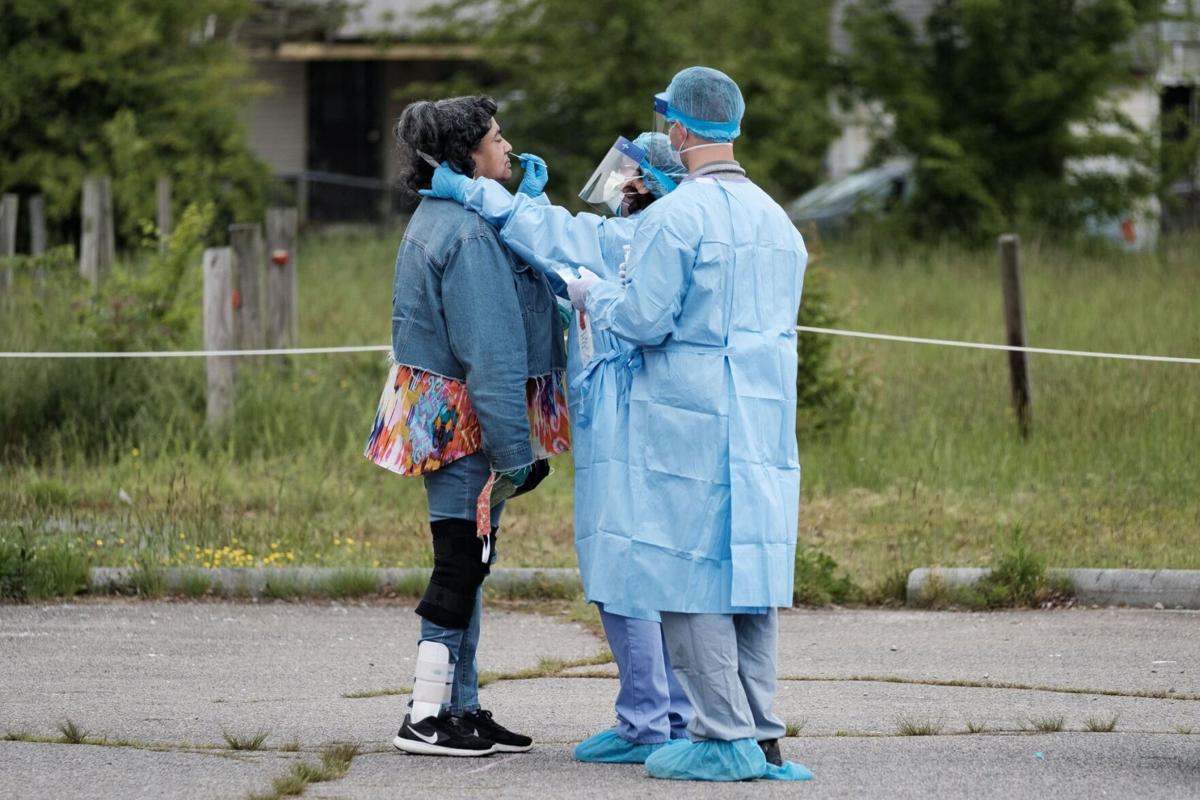 A woman is tested for COVID-19 in a parking lot in Richmond where the health department set up a temporary walk-up testing center.

As students return to school amid an ongoing surge of COVID-19 cases, testing has been touted as a key tool to reduce potential spread. Both the Virginia Department of Health and U.S. Centers for Disease Control and Prevention “strongly recommend” testing in schools, describing it as an “important mitigation strategy.” On Thursday, President Joe Biden also called for regular in-school testing, six months after allocating $10 billion for states to launch their own programs.

In Virginia, though, most students are headed back to the classroom without that regular testing in place. VDH has mapped out a statewide program for the 2021-22 school year, but the department is still selecting a vendor to run the tests. “We are anticipating that the pooled testing program will be ‘live’ by early October,” Dr. Laurie Forlano, deputy commissioner for population health, wrote in an email — about a month or more after most students have started school.

Beyond the delayed start date, the majority of the state’s 132 public school divisions haven’t committed to the program. According to VDH, 13 districts are currently signed up, including Alexandria, Charlottesville, Chesapeake and multiple divisions in the Southwest region of the state. Eleven private schools are also participating. But some of the state’s largest divisions, including Fairfax and Prince William counties, don’t have testing plans in place.

In some cases, plans have changed since they were communicated to families at the start of the year. Fairfax County, which enrolls roughly 180,000 students, originally announced it was “in the process” of partnering with its own third-party vendor to administer screening testing. But the district is “no longer consulting with that particular third party,” according to spokesperson Julie Moult.

“We continue to look at both public and private options,” she said. That could include the statewide program, but there’s currently no testing in place at any of the division’s nearly 200 schools.

Regular COVID-19 testing still isn’t a common feature at most schools across the country. But as officials scramble to protect unvaccinated children and prevent cases from spreading — which can lead to mass quarantines and significant staffing shortages — many officials, including Biden, are more aggressively touting the strategy as an important layer of prevention. In Virginia, there were 23 school-based outbreaks in August alone, including three with more than a dozen cases, according to VDH data.

Virginia first began exploring in-school testing on a wider basis in April, when it launched a pilot to provide rapid antigen tests to districts across the state. The current program will rely on pooled PCR testing, a more sensitive method that allows divisions to combine samples and screen multiple people at one time. The underlying principles, though, are still the same. With more and regular testing, the hope is that schools will more quickly identify and isolate cases of COVID-19 that might have otherwise gone undetected.

“It gives you a measure of how good or how bad you’re doing with your prevention techniques,” said Dr. Thomas Denny, CEO of the Duke Human Vaccine Institute, who also runs a pooled testing program for the university.

Like other public health experts, he emphasized that testing itself isn’t protective against COVID-19. “If we’re really trying to control this virus, you’ve got to do social distancing, good hand hygiene, and you would want every adult and virtually every child above age 12 to be vaccinated,” added Dr. William Schaffner, a professor of preventive medicine and infectious diseases at Vanderbilt University Medical Center.

But stagnating immunization rates have also contributed to the increased focus on testing. Virginia has no statewide vaccine mandate for educators, and rates vary widely depending on the district. In Wise County, for example, more than 30% of school staff are unvaccinated, and roughly 50 employees had to call out last Friday (though superintendent Greg Mullins attributed some of the absences to a Virginia Tech football game the same day). In the absence of wide vaccination coverage, pooled testing has frequently been posited as a way to prevent school closures.

“Like every other school district, I’d love to see us get to that point where we’ve got all of our children vaccinated and perhaps all staff,” Mullins said. “But we know COVID is going to be part of our lives at least for the foreseeable future. And anytime we can identify anyone who’s contracted it, it allows them to make sure that we have those individuals in quarantine as quickly as we possibly can.”

How successful testing can be as a preventive tool, though, largely depends on how it’s implemented. Schools in Virginia aren’t required to provide testing, and districts have wide flexibility to adapt the statewide program. VDH is securing vendors, providing all testing free of charge, and offering funding for additional support staff, but it’s up to local administrators to decide how widely and how often to test.

Health officials recommend screening at least once a week, but Chesapeake, for example, is focusing its initial efforts on “high-risk” middle and high school athletic teams (Chris Vail, a spokesperson for the district, did not clarify which sports the district considers “high risk”). Wise County, on the other hand, is considering testing up to 20 percent of its staff and students every week, or testing at least one classroom from every grade level.

“Some might want to limit it just to unvaccinated people,” Schaffner said. “There’s no single way to do this, but if you’re the local school board, you have to ask yourself, ‘What are our goals?’” Timing and follow-up are equally important. Denny said it’s vital that tests are processed quickly and that pooled results are accompanied by individual confirmatory testing if an initial batch comes back positive.

“That’s when you find out who in that pool actually has COVID-19,” he said. VDH plans to offer support for confirmatory testing in the event of a positive result, according to the department’s website. But both Denny and Schaffner were puzzled by the department’s guidance allowing individuals from a positive pool to remain or return to the school building as long as confirmatory testing is conducted within 24 hours after the initial batch result.

“The rationale for this is that if the persons had not participated in testing, the person who may be an asymptomatic case would be in the classroom anyway and the exposure would have already occurred,” Forlano said. “Requiring any individual in a positive pool to leave school until a confirmatory result is available could be a disincentive to participation.”

Requiring individuals in a positive pool to quarantine could be a logistical hurdle for schools and especially for families, Denny said. But he also said rapid turnaround on tests could minimize the inconvenience.

“If you’re going to follow that guidance, why bother testing?” he said. “Just worry about when somebody’s symptomatic and deal with it that way.”