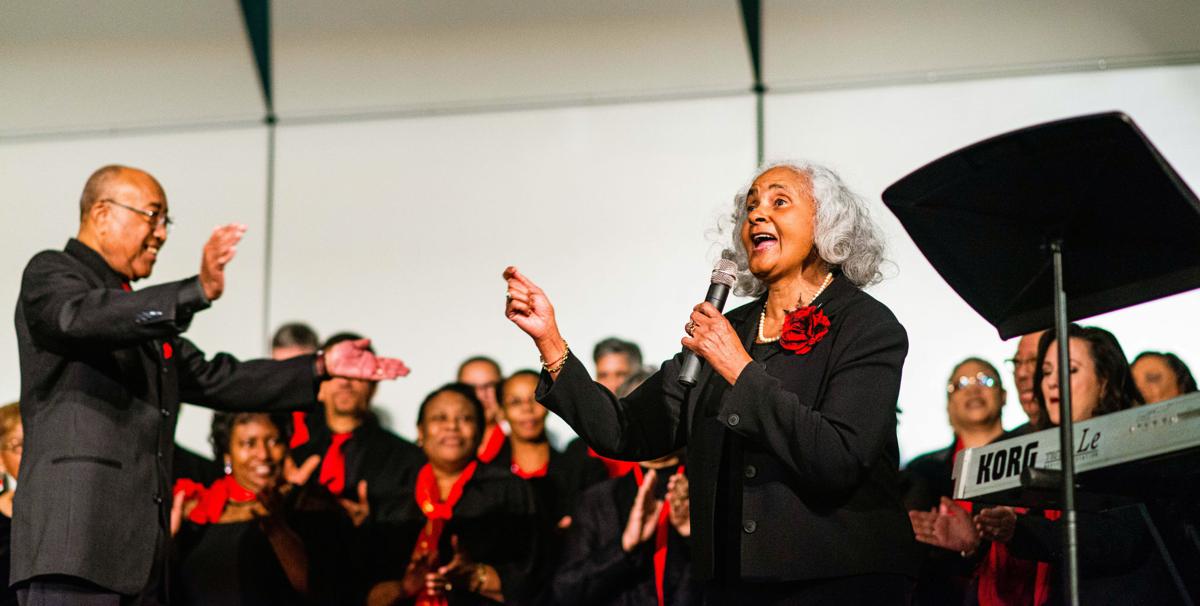 Janette Smith, a member of Mount Morris Baptist Church in Hume performs with the Martin Luther King Jr. Choir during the event at Highland. 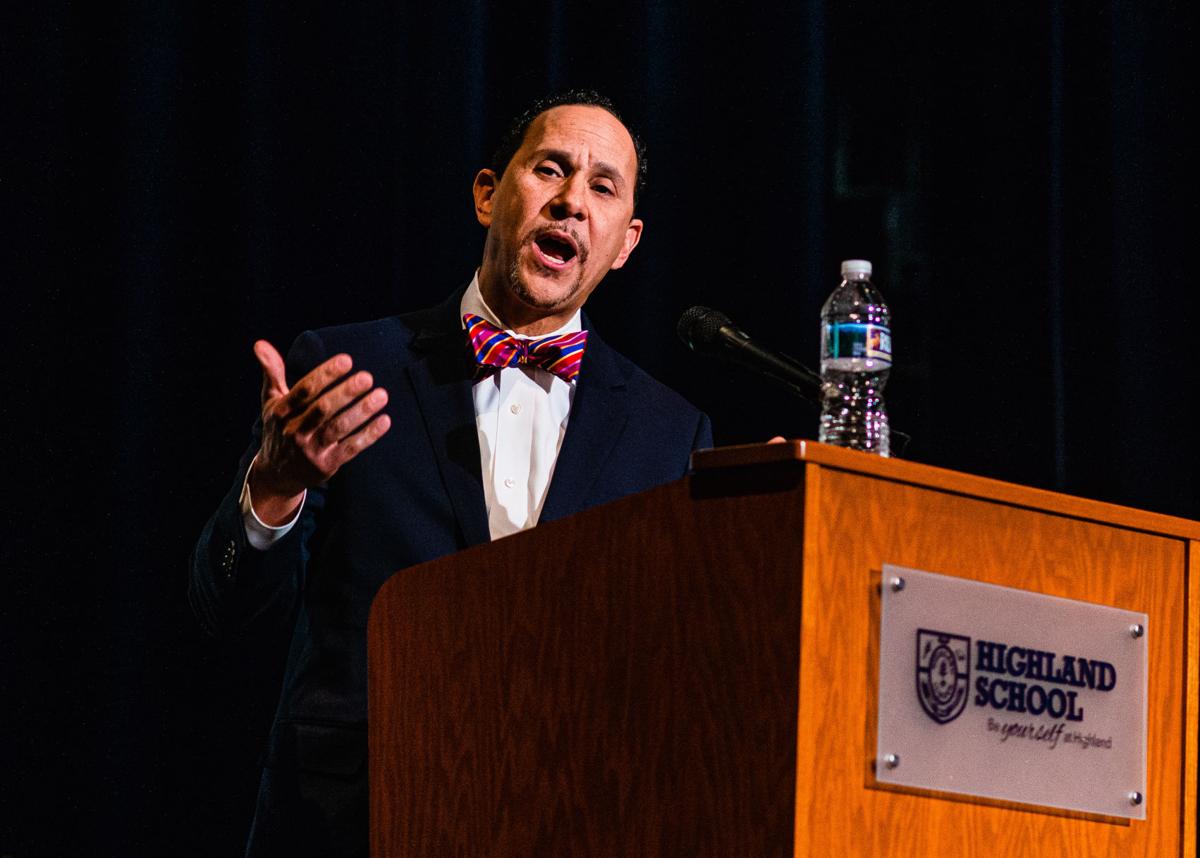 Rev. Dean Nelson, the keynote speaker for the event at Highland, addresses the gathering. 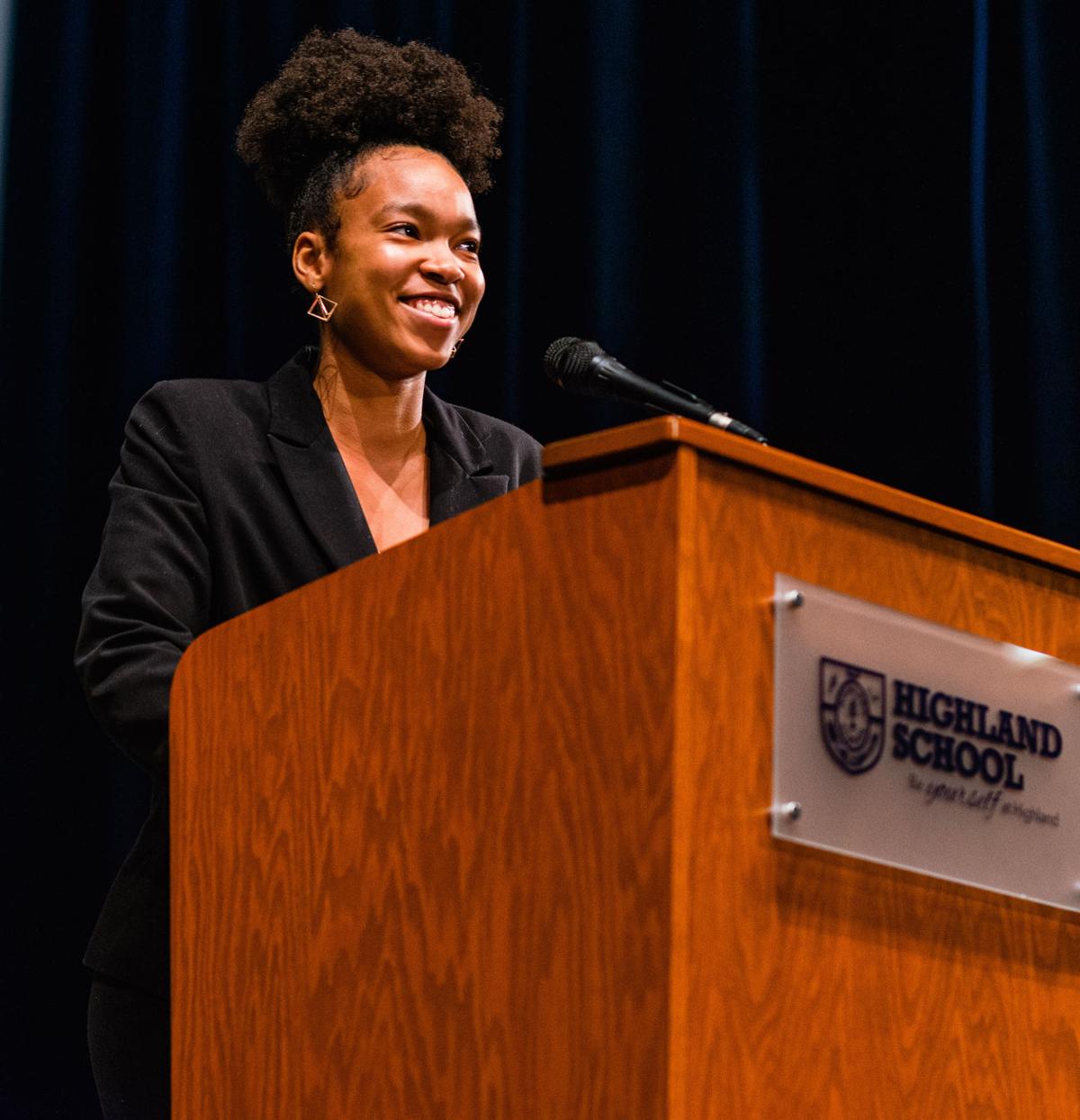 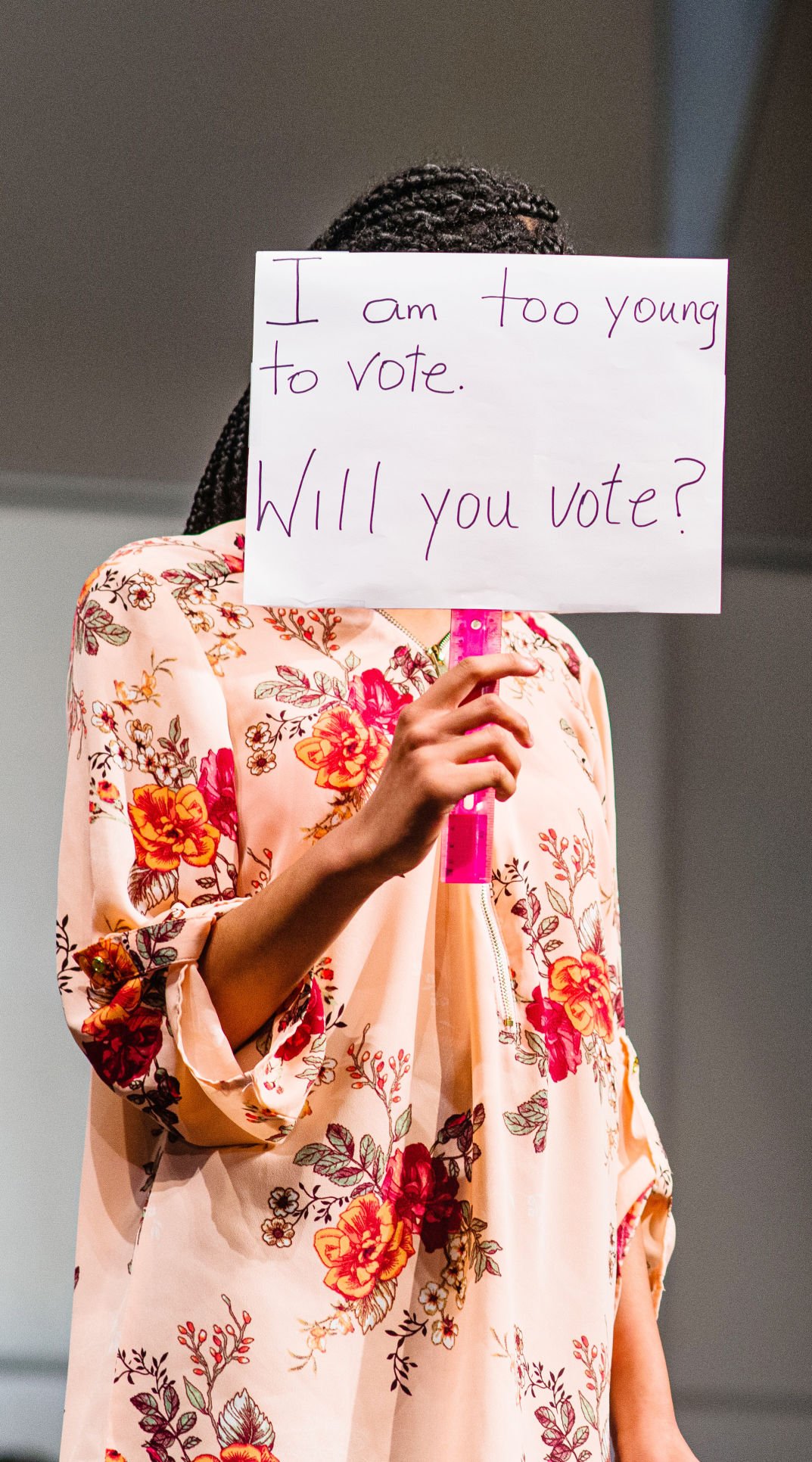 While Deaconess Paulette Gardner of Mount Zion Missionary Baptist Church reads an original poem during an MLK event at Highland School, a girl walks across stage as part of the performance, holding a sign reading "I am too young to vote. Will you vote?" 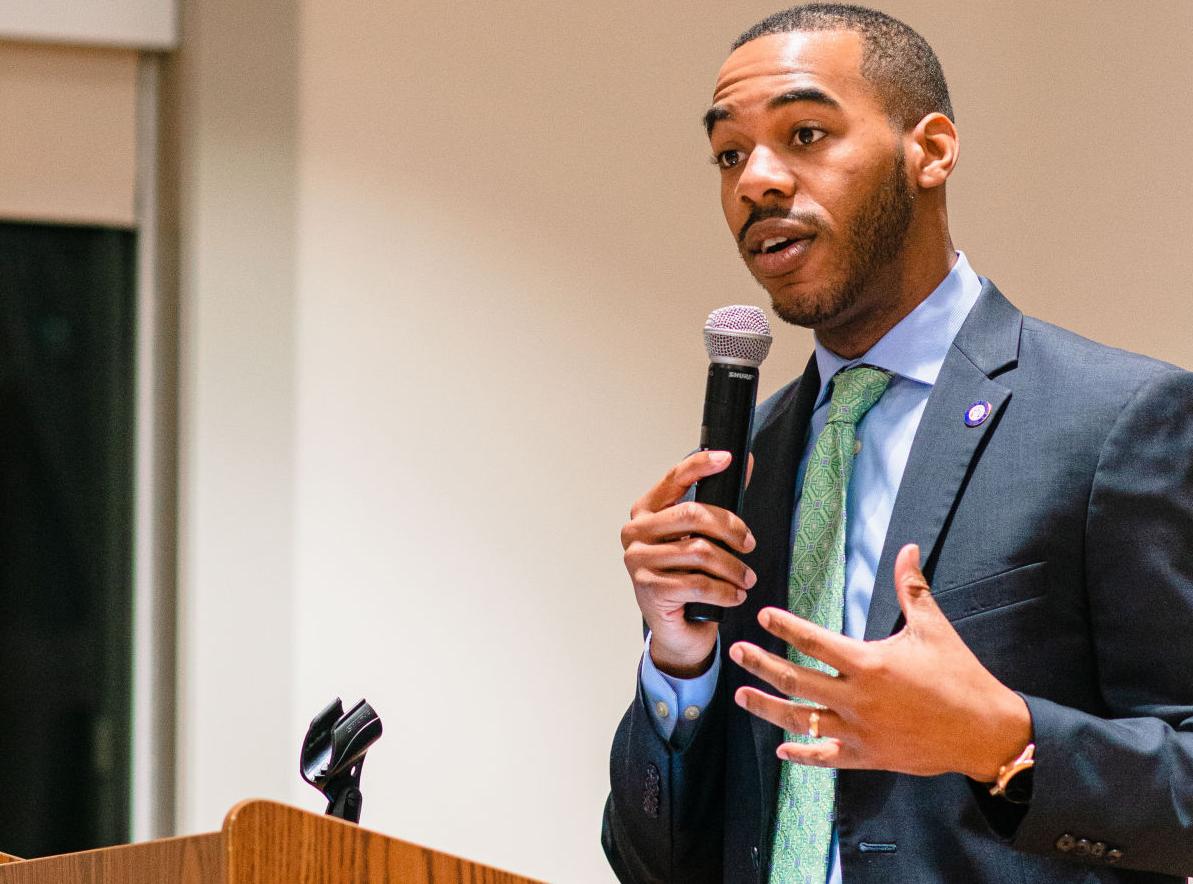 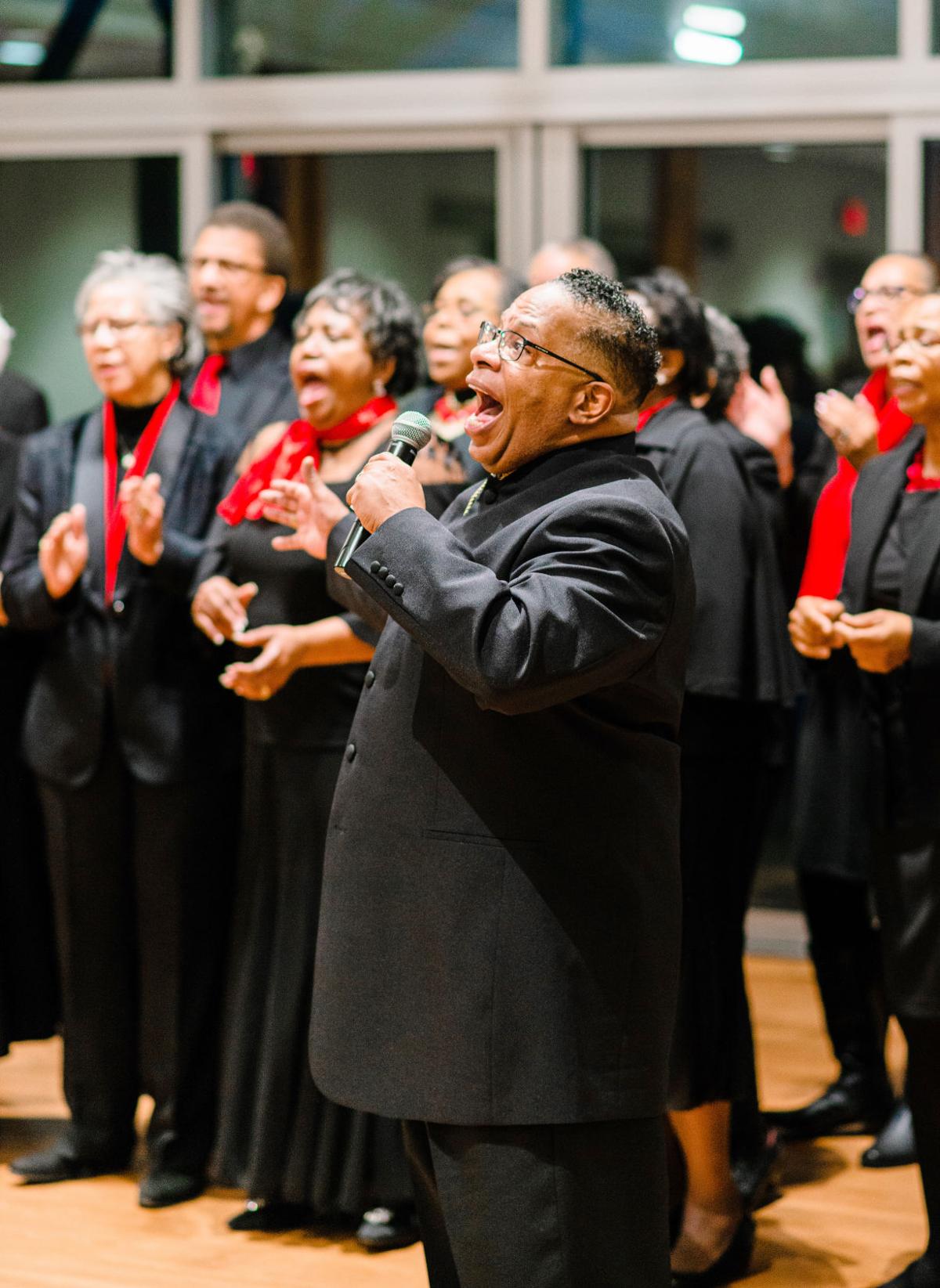 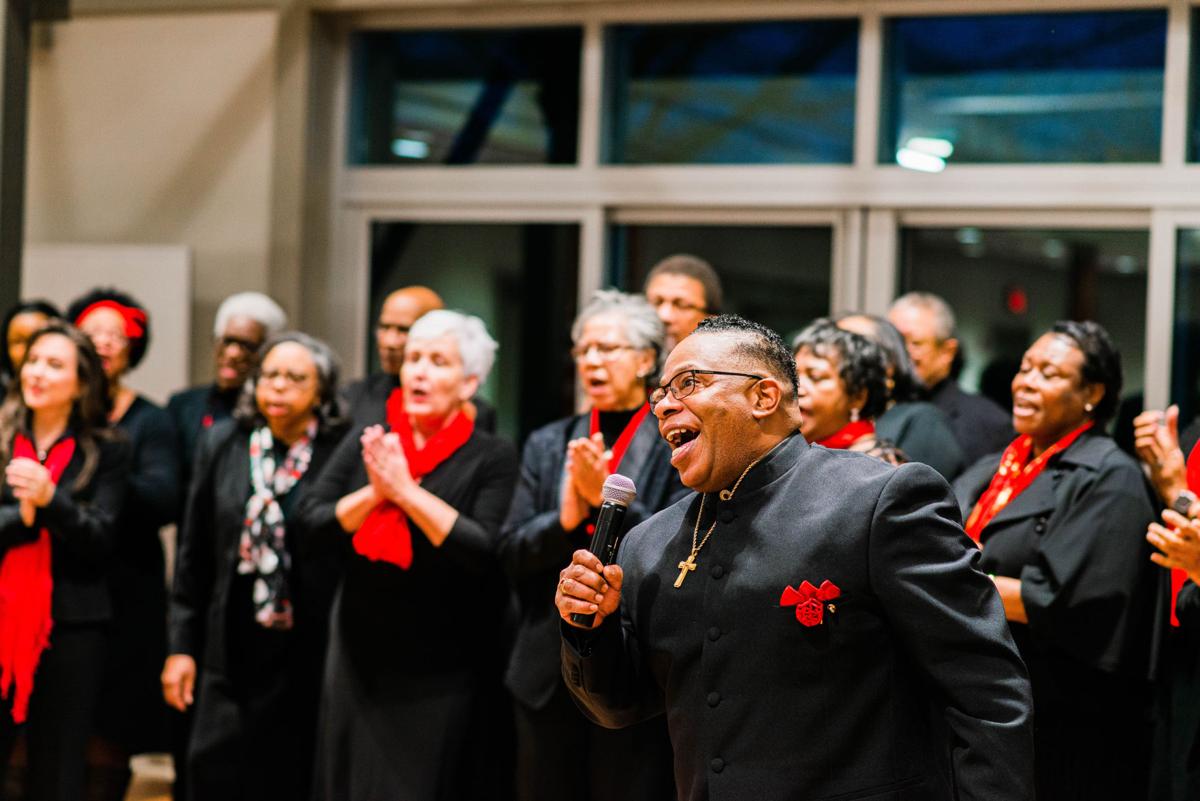 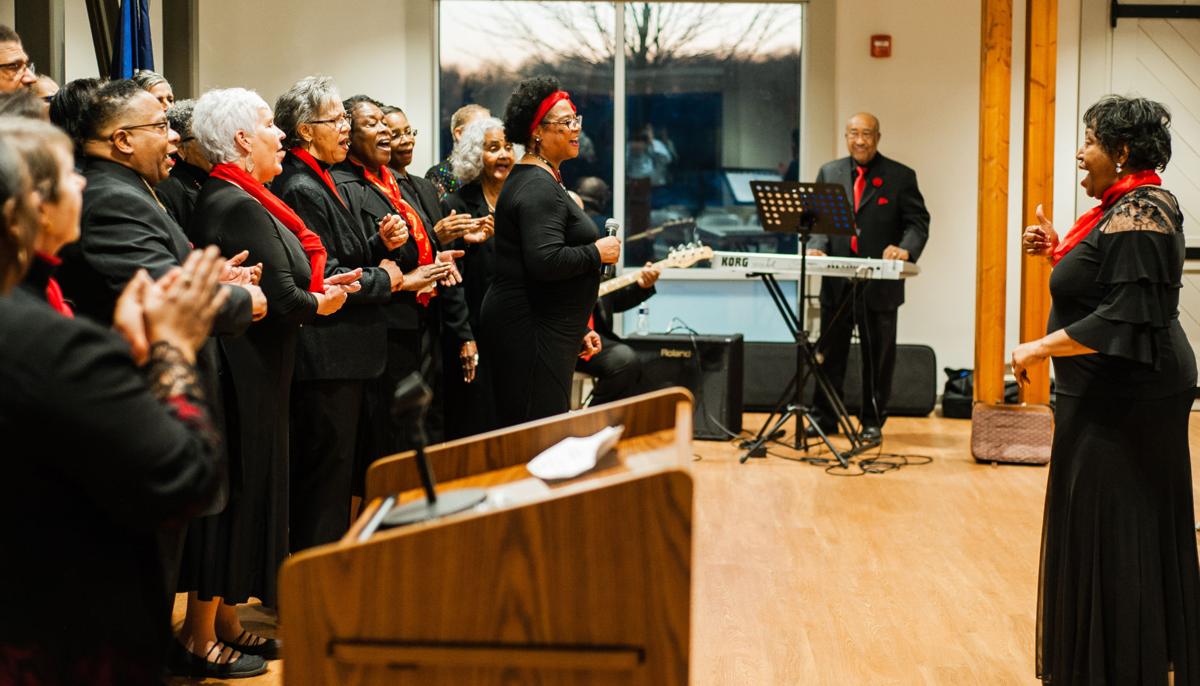 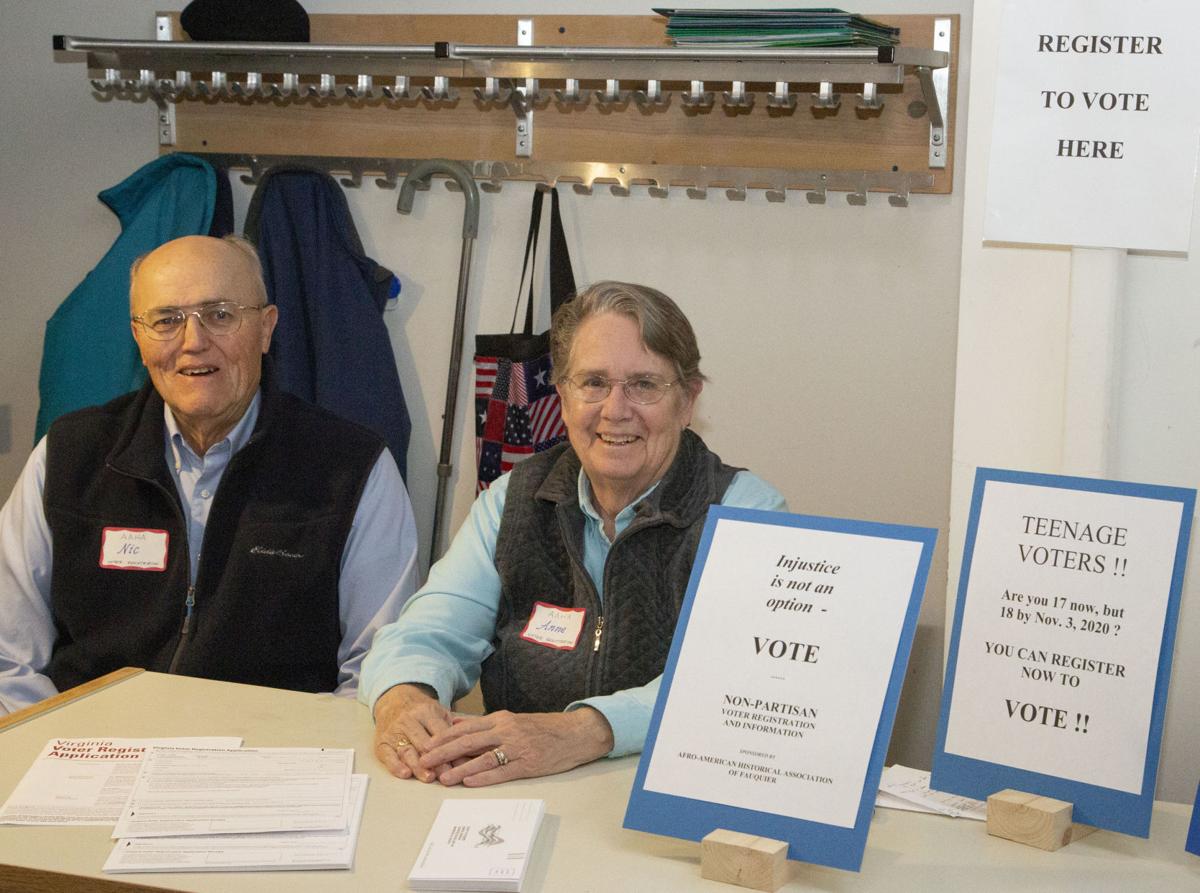 Janette Smith, a member of Mount Morris Baptist Church in Hume performs with the Martin Luther King Jr. Choir during the event at Highland.

Rev. Dean Nelson, the keynote speaker for the event at Highland, addresses the gathering.

While Deaconess Paulette Gardner of Mount Zion Missionary Baptist Church reads an original poem during an MLK event at Highland School, a girl walks across stage as part of the performance, holding a sign reading "I am too young to vote. Will you vote?"

“Injustice is not an option. Vote!” was the theme of the “community celebrations” organized by Mount Zion Missionary Baptist Church to honor the life and legacy of The Rev. Dr. Martin Luther King Jr. on Monday, Jan. 20. The first event was at Highland School and the second at Lord Fairfax Community College.

The Afro-American Historical Association of Fauquier County provided an information table and volunteers at both events to assist with voter registration and answer questions about voting in Virginia.

Despite the secular theme, the speakers who addressed the audience at Highland largely emphasized King’s deeply religious approach to advocacy. The Martin Luther King Jr. Community Choir, formed annually from members of 17 area church congregations, performed rousing hymns and spirituals among speeches, prayers and a reading from the Bible.

"I know that today we are in Highland School, but today they prayed and sanctified this place and we are in a house of God,” said the Rev. Dean Nelson, the keynote speaker at Highland. Nelson grew up in Fauquier County and now resides in Maryland. He is a nationally known pro-life activist and sits on the advisory board for Black Voices for Trump, part of the president’s reelection campaign.

Nelson framed King’s legacy mainly in terms of the struggle between “biblical Christianity” and secularism and encouraged listeners to use their vote to be the “moral conscience of the state.”

“We live in a culture that is increasingly hostile to what we call ‘biblical Christianity,’” he said. “The civil rights movement at its core was a moral movement. … What [King] preached was laced with and rooted in a biblical ethic.” He lamented that, in his view, most celebrations of King do not emphasize his role as “a minister of the gospel” and he thanked the organizers for the openly religious tone of this gathering.

By ignoring the importance of cultural “righteousness,” he continued, “we will ultimately find ourselves in a culture of moral mediocrity. If are not careful, the epitaph on humanity’s headstone will read ‘freedom and prosperity died here.’” He cited slavery in North Africa, human trafficking, access to abortion[3]  and an insufficient number of church-sponsored schools as examples of “morality that is decreasing” in American culture.

“We need to vote … Those who marched on Pettus Bridge did so for us … so that we would have the right to cast our votes and we need to do that.”

“The word of God is our guide,” he reminded the audience. And, he said, “don’t let anyone convince you that your vote doesn’t matter.”

About 175 people attended the event at Highland, including many local elected officials and numerous clergy members from the area. In addition to prayers and remarks by clergy, there were recitations of essays and a poem written on the day’s theme and a presentation of awards by the Martin Luther King Jr. committee of Mount Zion.

About 100 people attended the second celebration of the day, co-sponsored by Mount Zion and Lord Fairfax. Organizers added the event to the annual schedule in an effort to include people who couldn’t attend at the earlier time, said Mount Zion’s Pastor Keith McCullough.

The MLK Choir performed, giving the evening the air of a Sunday morning church service. But unlike the earlier event, the secular aspects of King’s legacy were emphasized as well. Dr. Chris Coutts, LFCC’s provost, and Caroline Wood, the Fauquier campus’ dean, talked about the importance of access to affordable education and housing as it relates to reducing inequality.

Warrenton Town Councilman Renard Carlos (at large) was the keynote speaker. In a conversational address, he argued that most issues of social injustice should be addressed first at the local level through small, intentional acts of kindness and by lobbying local government officials.

“The civil rights movement … started in local churches, maybe around someone’s kitchen table, [with people saying] ‘What are the challenges right here in my local community?’”

And when it comes to whose responsibility it is to solve economic and social inequality, older community leaders are passing on that baton to his generation, the 31-year-old said. “We don’t have the luxury of waiting anymore for someone else to do it.”

He closed with a call to action and an appeal to unity. “We can no longer wait on the sidelines for someone else to fix our communities, and we can no longer try to solve the injustice [by pitting] one side versus the other. It’s just not sustainable anymore. The time is now to remember that we are all God’s children. And it sounds cliché to say, but we are all Americans.”

MLK was a great inspirational person. He was also a republican that wanted minorities to become strong on their own, not totally dependent on the government.