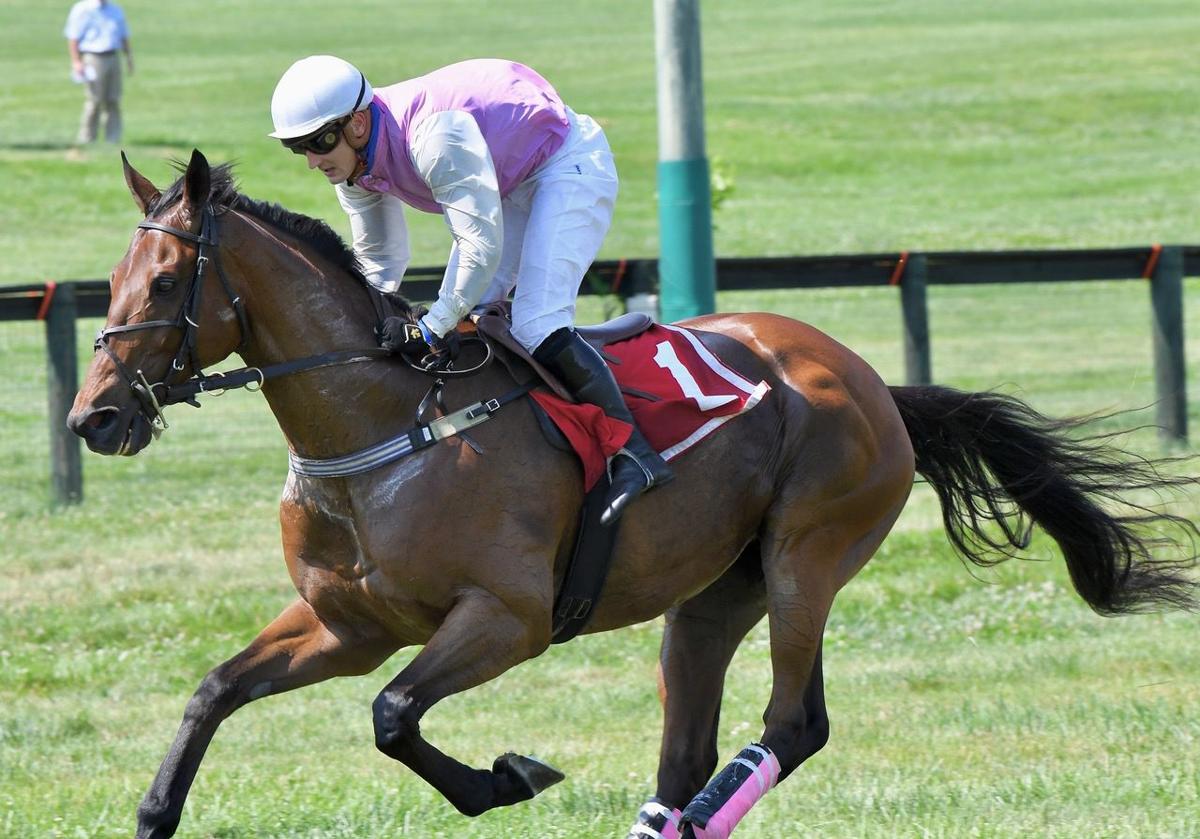 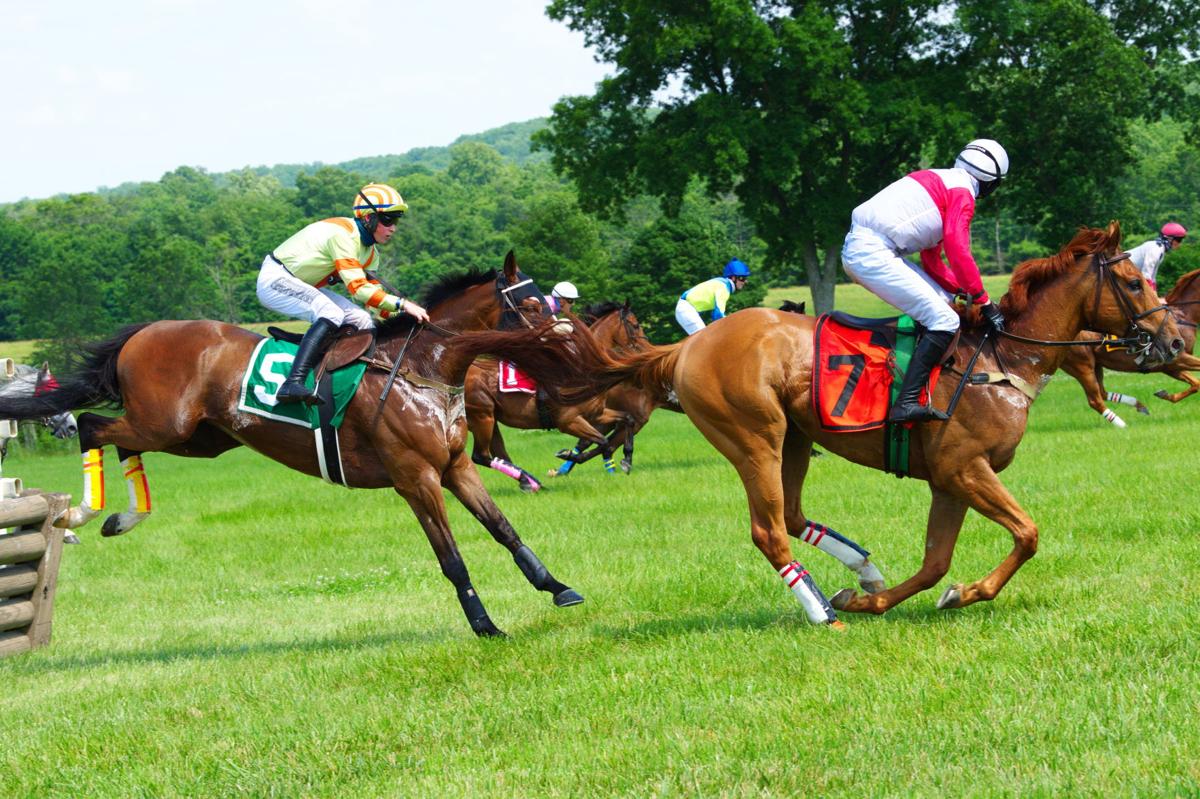 It was high drama in Saturday's Virginia Gold Cup, with last year's winner and national champion Andi'Amu, no. 5 in yellow silks, drawn off course by Storm Team on the first circuit of the Great Meadow racecourse. McDermott (no. 7 in white with red silks) and Tom Garner on Andi'amu mistakenly veered toward the second-last jump rather than taking the inner course to the eighth jump.

Two-time champion Doc Cebu took command late in Saturday’s $40,000 Virginia Gold Cup and drew away with authority in the signature timber stake at Great Meadow in The Plains.

Ridden by 2019’s co-champion jockey Michael Mitchell, Doc Cebu jumped strongly throughout the Cup’s four miles and delivered a dominant victory in what has to be considered the oddest race at the most unusual race meet in the weirdest year since the inaugural running in 1922.

It was a strange day: the voice of Virginia steeplechasing, Will O’Keefe, provided his standard stride-by-stride commentary over the PA system – to an almost empty house. Ten oversubscribed races plumped the star-studded program at the vast, sun-soaked field events center.

But between O’Keefe’s calls, but it was strangely silent. Due to pandemic limitations still curtailing public events, just a few hundred active participants witnessed the first spectator-free Gold Cup.

“It was weird to be here with just a skeleton crew. It’s so quiet,” said Virginia Gold Cup Association executive director Diane Jones before the title event.

The day was about to get weirder.

In the eponymous feature, two of the circuit’s most experienced professionals took the wrong course, eliminating pre-race favorite and 2019 winner Andi’amu from the race and leaving Doc Cebu alone at the wire to deliver the powerful performance.

Gold Cup shaped up as a grudge match between last year’s Gold Cup winner, and timber champ, Andi’amu and 2017 and ’18 champion Doc Cebu. Winner of two International Gold Cups at Great Meadow, Doc Cebu had finished second at the June 13 Middleburg Hunt Cup behind Ballybristol Farm’s Andi’amu. Mitchell said he’d “expected (Doc Cebu) would improve off of that run” at Glenwood Park two weeks ago, plus, he added, “four miles is ‘his’ distance. He needs a piece of ground” to express speed and stamina in equal measures.

The race unfolded as expected at first, the Jack Fisher-trained novice Storm Team (Sean McDermott up) taking command at the break, Andi’amu settled in second with Tom Garner, Mitchell tucking Doc Cebu behind the leaders. “Switching him off,” as Mitchell put it, was the strategy in the early stages of the four-mile marathon. “He (established) a good rhythm.” Mitchell said his position, fourth – of six – in the early running set up what he hoped would be a strategically planned late run in the final turn of the course.

Coming out of the North Rail turn, between the sixth and seventh jumps, changed Mitchell’s strategy.

Briefly confused by what he called an “inviting route” off the dowling poles marking the north end of the course, McDermott incorrectly guided leader Storm Team to the 19th fence up the outside of the racecourse, rather than to the eighth fence up the inner. Garner followed him aboard Andi’amu. Both pros realized their mistake as they cleared the wrong obstacle, glancing left at the others racing 50 feet to their left.

“For a split-second, and I mean, like, one step, I questioned which way to go,” Mitchell admitted later. He could have easily tugged the right rein to follow Storm Team, or the left rein to stick behind Codrington College (Darren Nagle up.)

“You do question yourself,” said the veteran pro, a native of Rugby, England at 29 with two jockey titles – the U.S. crown last year, the New Zealand championship in 2015. “At the speed that you’re going there’s not a lot of time the hesitate … that you’re making the wrong decision.

“What went through my mind is there’s a huge long run from the sixth fence (on the backstretch) to the seventh (a third of a mile away, in the middle of the homestretch.) I knew I was correct.”

Storm Team and Andi’amu pulled up – off-course horses are not allowed to continue, and riders are fined for staying in the race.

Doc Cebu jumped strongly off new leader Codrington College’s lead, Mitchell said, moving to challenge at the second-last and extending to 12 lengths at the wire. Codrington College was second, Super Saturday (Gerard Galligan) the only other finisher in third. Lemony Bay pulled up on the backstretch.