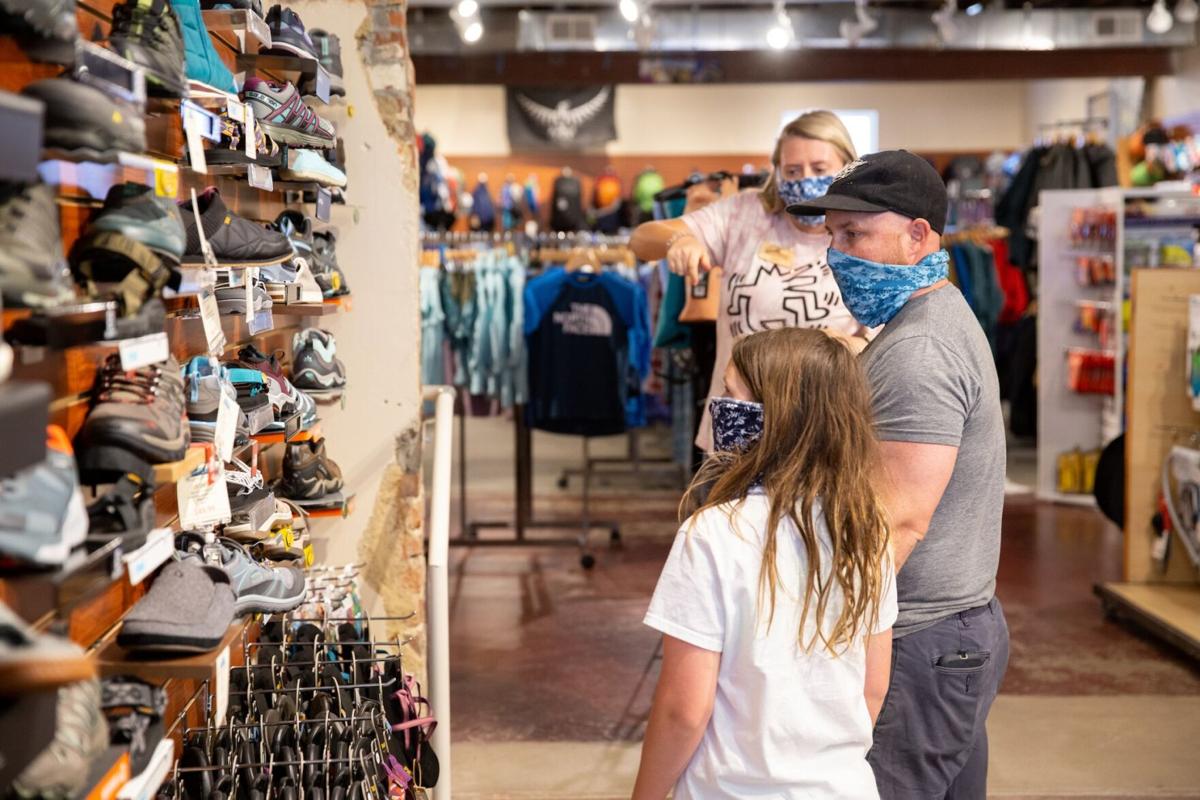 Jay Breneman and his daughter, Anna Grace, browse footwear at Walkabout Outfitter in Richmond, Va., May 16, 2020. 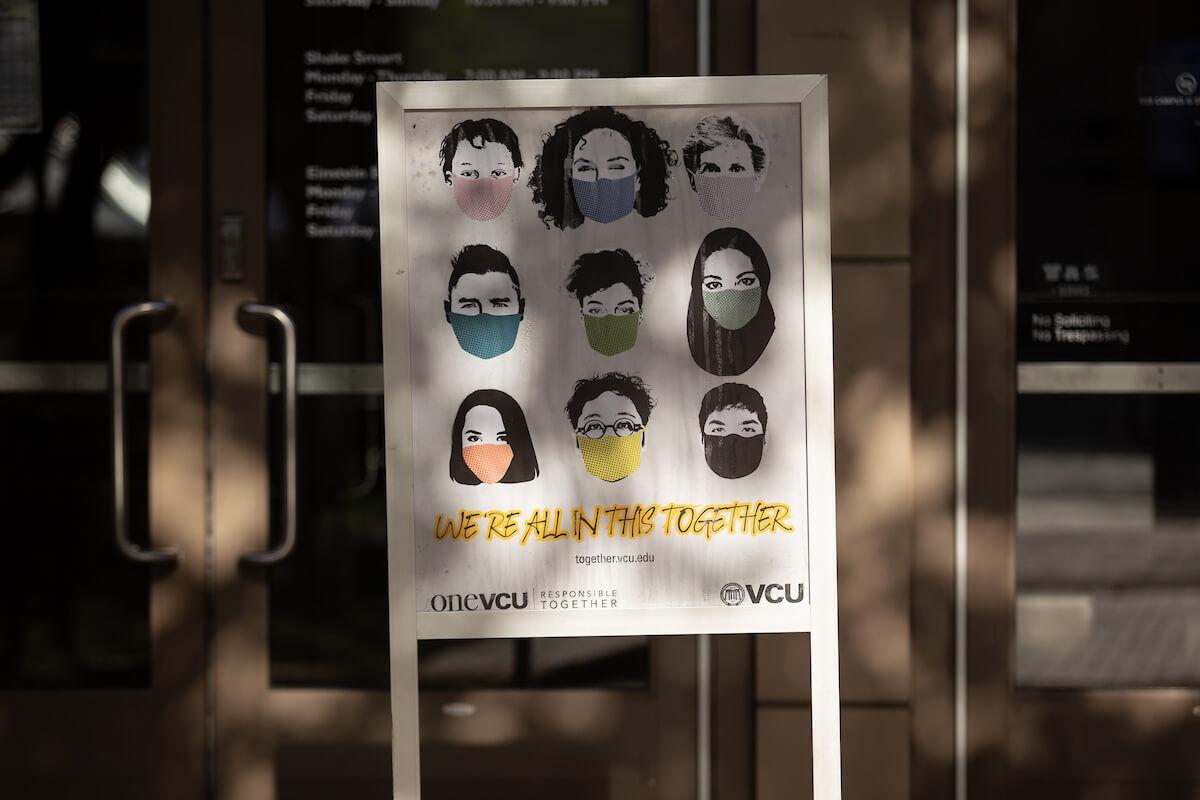 Signage encouraging people to wear masks on the VCU campus 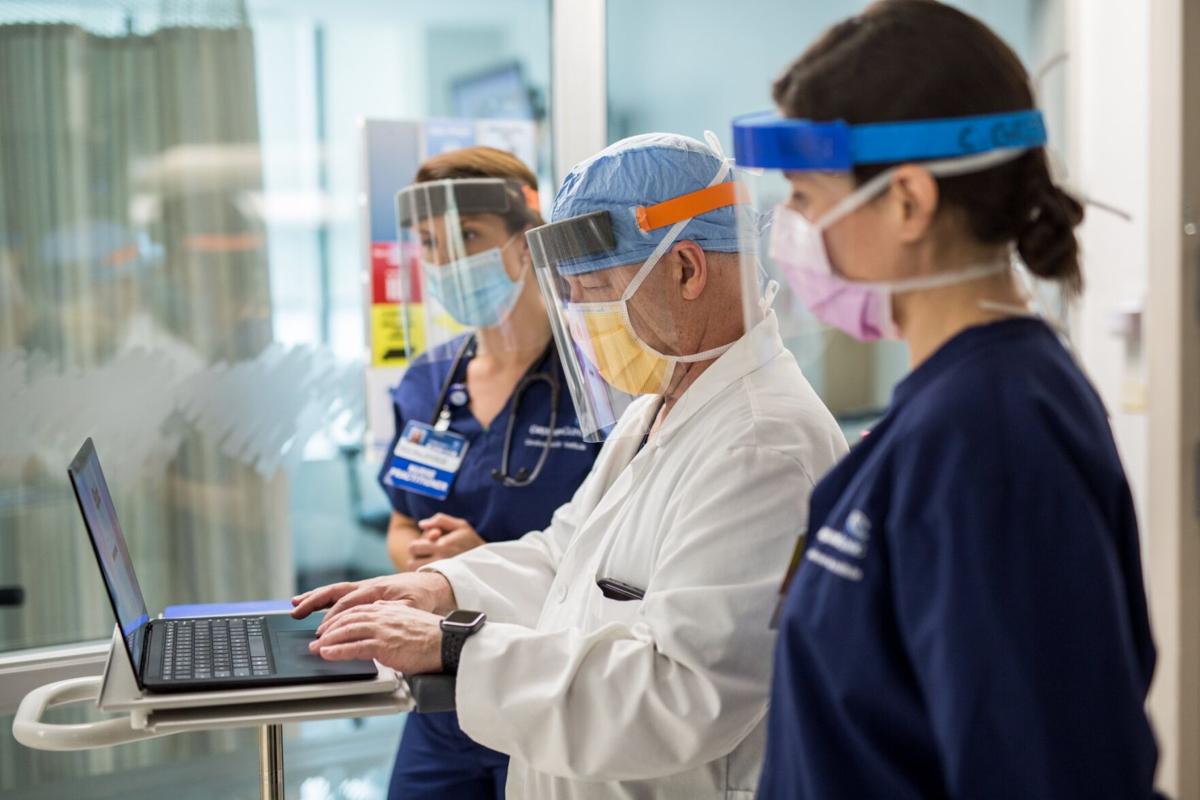 Reported mask use in Virginia has been falling over the last several weeks, worrying public health experts as the winter holidays approach.

The data on masking comes from scientists at the University of Virginia’s Biocomplexity Institute and Carnegie Mellon’s Delphi Research Group, which has been tracking trends in pandemic-related behaviors and activities since March 2020. Using a slew of resources, including daily Facebook surveys and anonymized cell phone data from the company SafeGraph, researchers have been able to track several pandemic-related data points — from vaccine acceptance to the number of people resuming trips to bars and restaurants.

When it comes to masking, survey data indicates that use has dropped in Virginia since mid-September — the peak of the state’s most recent delta surge. For most of that month, more than 65% of respondents reported regularly wearing masks in public. By mid-November, it had dropped to roughly 62%, even as the average number of daily new cases again began to rise.

A decline of three percentage points may not seem like much, but the gradual stagnation in mask use is worrying to health experts for multiple reasons. For one, data from the last year shows that masking has tended to plummet as COVID-19 metrics improve, leaving fewer people taking a layered approach to preventing transmission. In July, for example — as case counts in Virginia reached record lows — fewer than 40% of people reported regularly wearing masks in public.

While it can be tempting to drop preventive strategies in the face of lower caseloads, a repeat of July’s numbers would be particularly troubling now, said Dr. Taison Bell, an infectious disease specialist at UVA. The highly infectious delta variant now accounts for virtually all new coronavirus infections in Virginia, according to data from the state Department of Health, and it’s changed the risk calculus for certain behaviors. While breakthrough cases are still relatively rare, vaccination can’t single-handedly stop someone from catching or spreading the disease.

“Delta created a big shift in how easily the virus spreads, and it makes it that much more important to not rely on any one thing to stop transmission,” Bell said. Surveying also shows that unvaccinated Virginians — particularly those who are most resistant to the idea of getting the shots — are the least likely to be wearing masks.

That creates a particular risk amid colder weather and the holiday season as more people gather together indoors. Some states — and several countries in Europe — are already struggling with fresh waves of the virus. Biocomplexity Institute researchers noted that Virginia often lags behind other states when it comes to the timing of new surges.

“Going into the winter, knowing that vaccine immunity does decrease for most people and can still lead to more severe infections in higher risk folks — it makes absolutely no sense to let up on mask use right now,” Bell said.

Compared to last year, Virginia is still in a much better place when it comes to new waves of infection. Almost 77% of the state’s adult population is fully vaccinated, according to VDH, and roughly 87% has received at least one dose. Nearly 19% state’s 5 to 11-year-olds have been vaccinated since the shots were authorized for the age group earlier this month.

Bell said those rates of uptake make it highly unlikely that Virginia will see the same type of widespread surge it did last winter, when the state — on some days — recorded hundreds of COVID-19 deaths. Instead, it’s more likely the state will see regional waves in communities with low vaccination rates.

Those geographic disparities are already emerging in the data. Some localities, like the highly vaccinated Fairfax County, have reported fewer than 10 hospitalizations a day for most of November. Southwest Virginia, on the other hand, is continuing to struggle with severe infections.

As of Friday, the “near Southwest region” (which includes hospitals in Roanoke, Salem, Danville and other nearby cities) had 182 patients hospitalized with COVID-19, with 74 admitted to the ICU, according to data from the Carilion Clinic.

“Notably, the majority of these cases are among unvaccinated patients,” she wrote in a Monday email. And with a community immunization rate that’s still hovering around 45%, new infections are likely to rise. Ramey said the number of newly diagnosed cases in Ballad’s coverage agea has already ticked up in recent weeks, and the same trend has been seen throughout the Southwest region, according to VDH data.

Gov. Ralph Northam began easing Virginia’s mask requirements in May, and the last of the state’s emergency COVID-19 restrictions expired on July 1. With no statewide mandates, hospitals are largely reliant on their local communities to follow federal safety guidance, which still calls for universal indoor masking in areas with substantial or high transmission (categories that still cover most of Virginia).

Officials are eager to avoid additional COVID-19 deaths and severe cases of the disease, which can lead to lingering health problems. But there’s also concern that even a moderate surge could overwhelm local hospitals, particularly in more remote areas with fewer beds and medical resources.

During the most recent delta surge, Virginia hospitals quietly asked the Northam administration to reinstate pandemic emergency waivers as they struggled to keep up with thousands of new hospitalizations. Staffing shortages have been a particular challenge, and Bell said they’ve become a problem even at well-resourced hospitals in communities with high vaccination rates (including UVA Health).

“We’re feeling the crunch just like many of our peer institutions,” he said. But the crisis is even greater for small and rural health systems. Augusta Health, an independent community hospital in Fishersville, was so overwhelmed by the latest delta surge that it requested assistance from the federal government back in September. In a letter to VDH officials, CEO Mary Mannix described a hospital in the midst of “a monumental staffing and care crisis,” with critically ill patients routinely forced to board in the emergency room.

“Augusta Health is a sole community hospital and we are in the catastrophic position of contemplating EMS diversion for critical care patients due to our limited ability to provide safe and appropriate care,” she wrote. Bell pointed out that when health systems are overwhelmed with COVID-19 cases, it can force them to ration care for every patient coming through the door.

“A lot of health care depends on how quickly you can get things done,” he said. “So if you’re coming in with a heart attack or a stroke and a hospital system can’t mobilize those staffing resources, then your health is going to suffer, too.”

In Fauquier County, there were 19 new COVID-19 cases reported today, 22 yesterday. The county has had a total of 7,406 cases since the beginni…