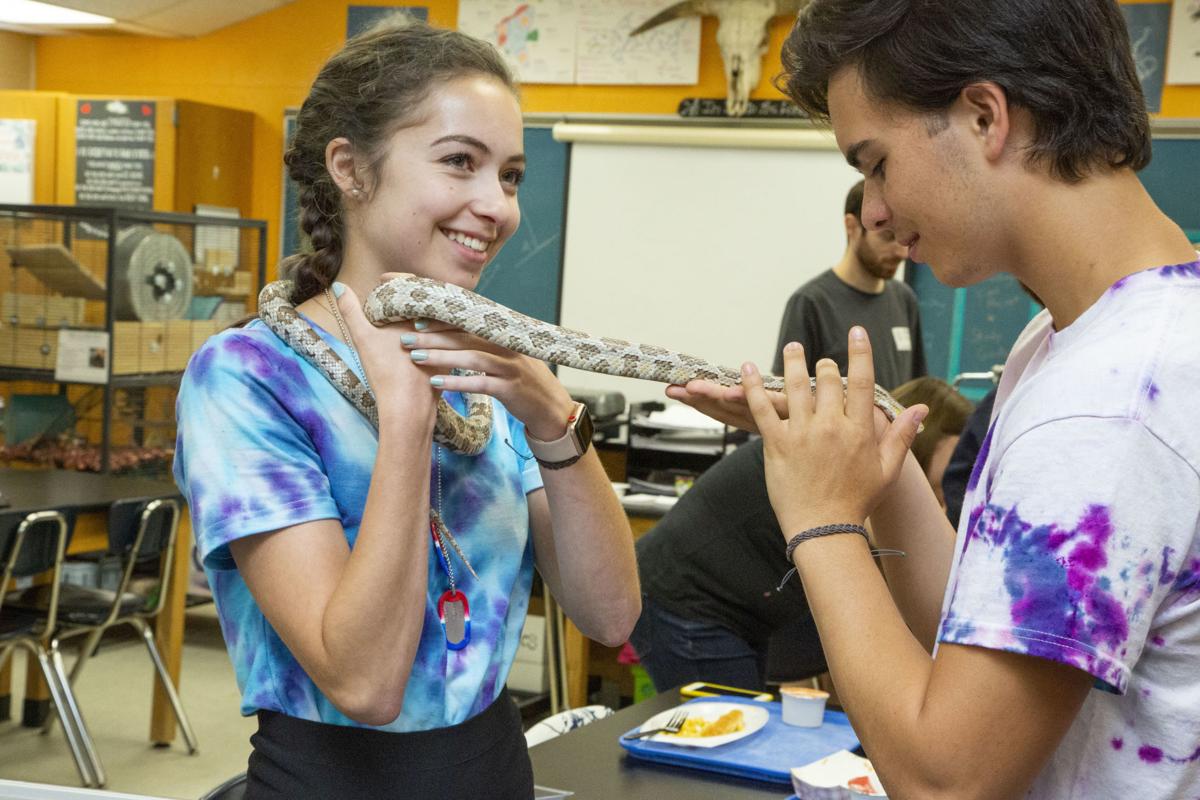 Nathaniel Wilson, a junior, introduces Gracie Gonzalaz, a senior, to a corn snake in Liberty High School’s ecology classroom during their “one lunch” hour Friday afternoon. 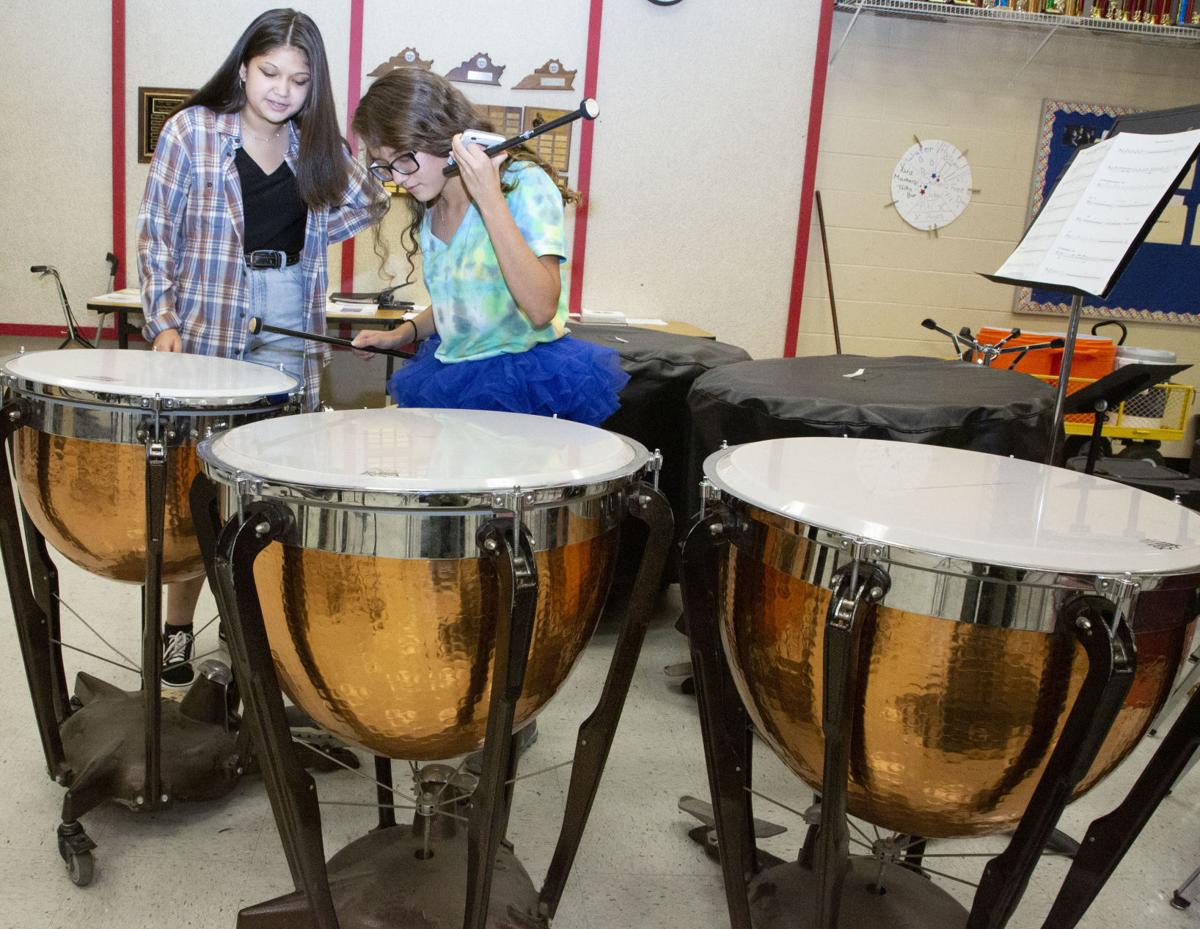 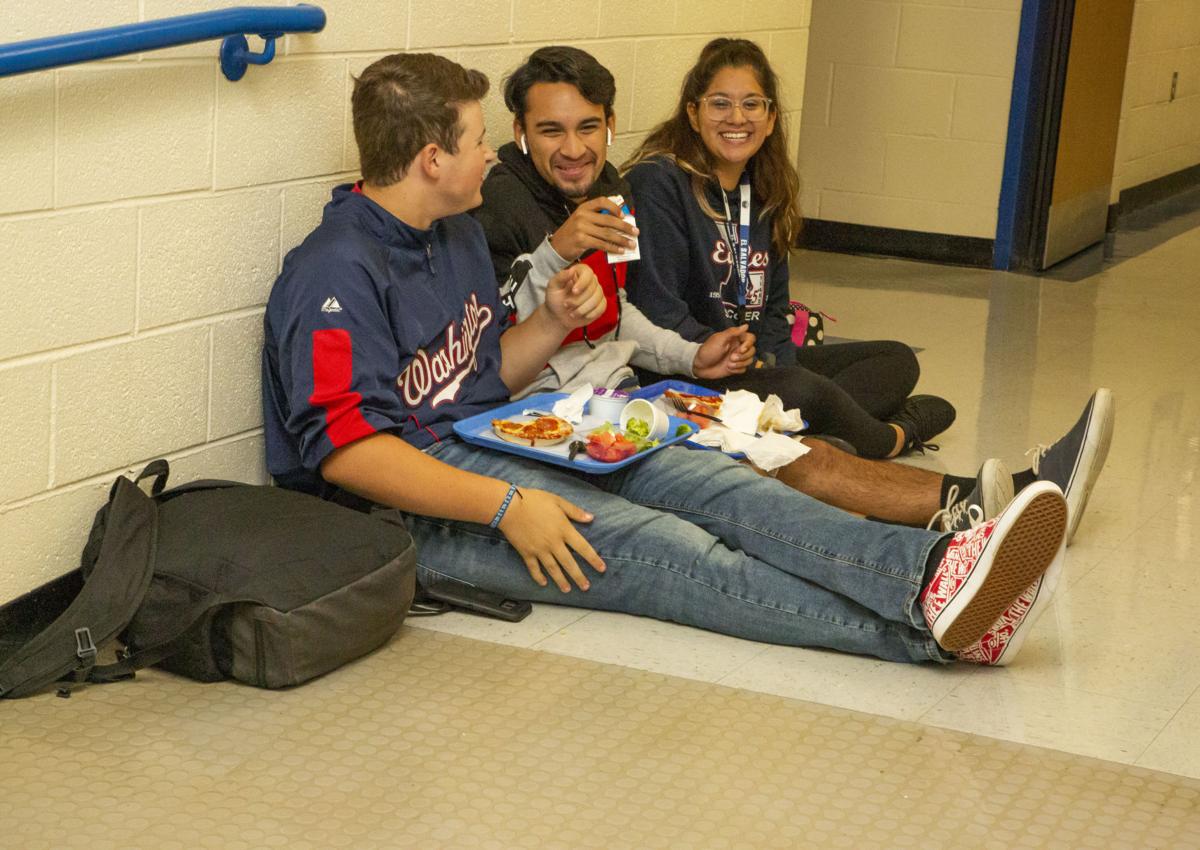 Sophomores Derek Reece and Jairo Turcios relax and eat their lunch in the band hallway with freshman Julissa Sanchez. 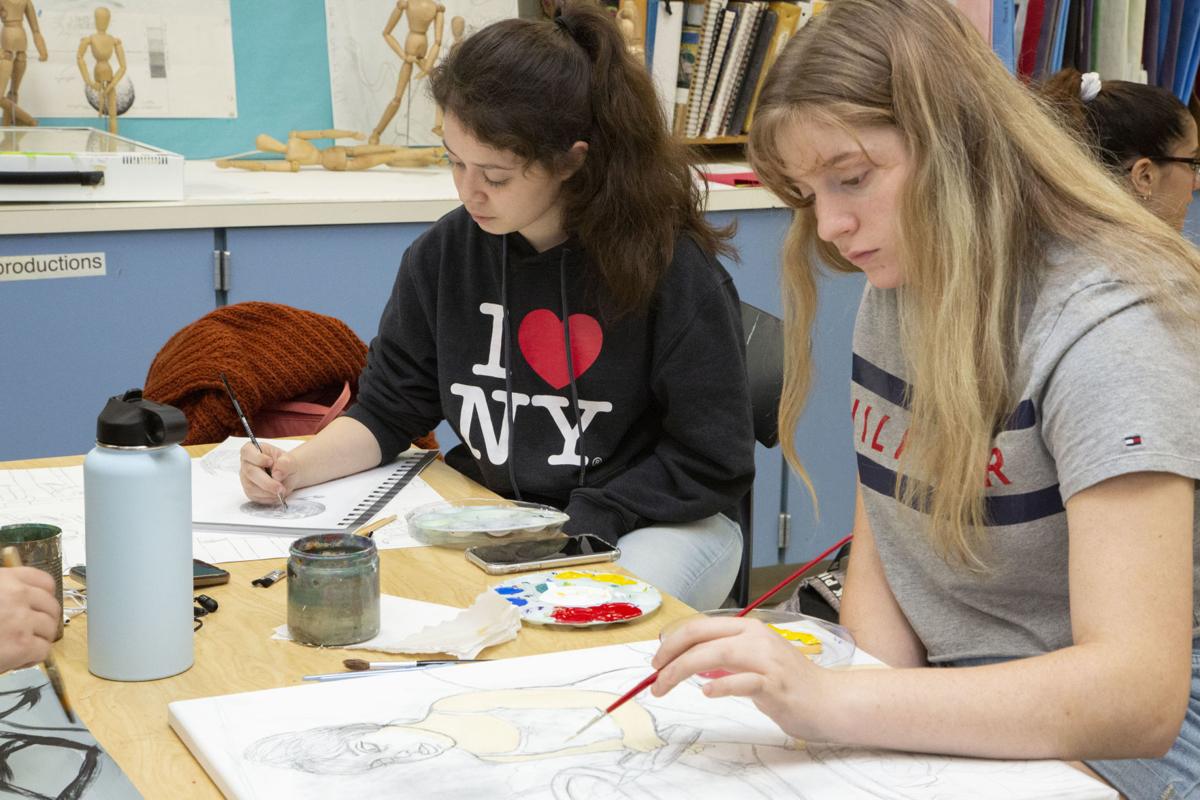 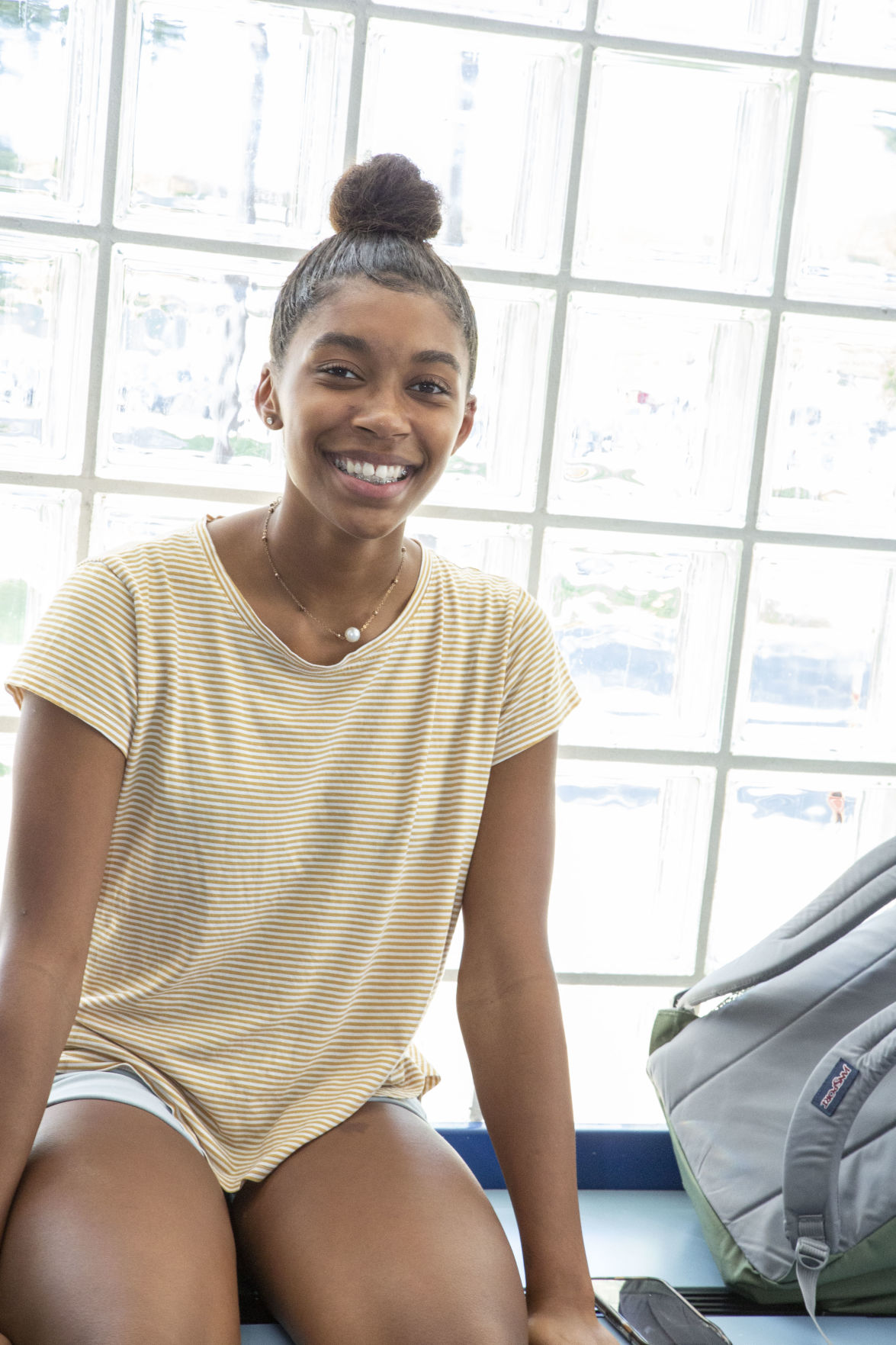 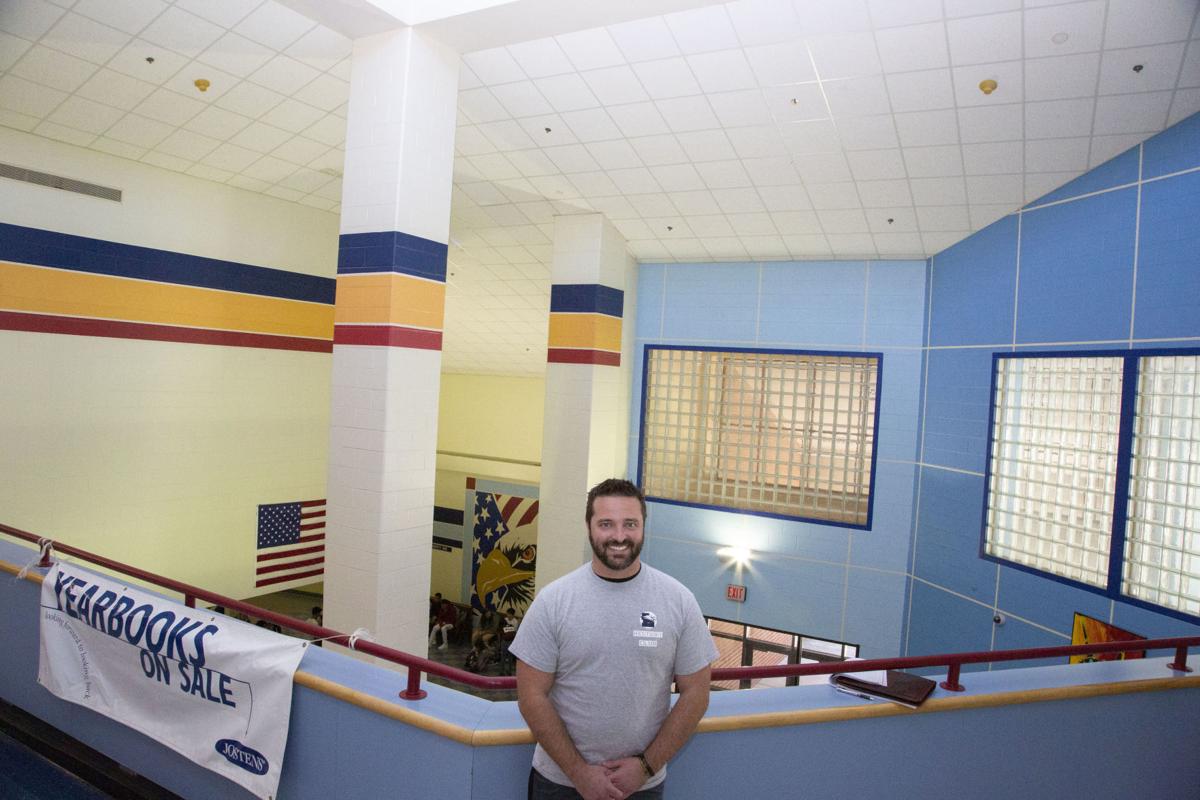 Social studies teacher Dean O’Brokta had hall duty during “one lunch” on the second floor at Liberty on Friday. 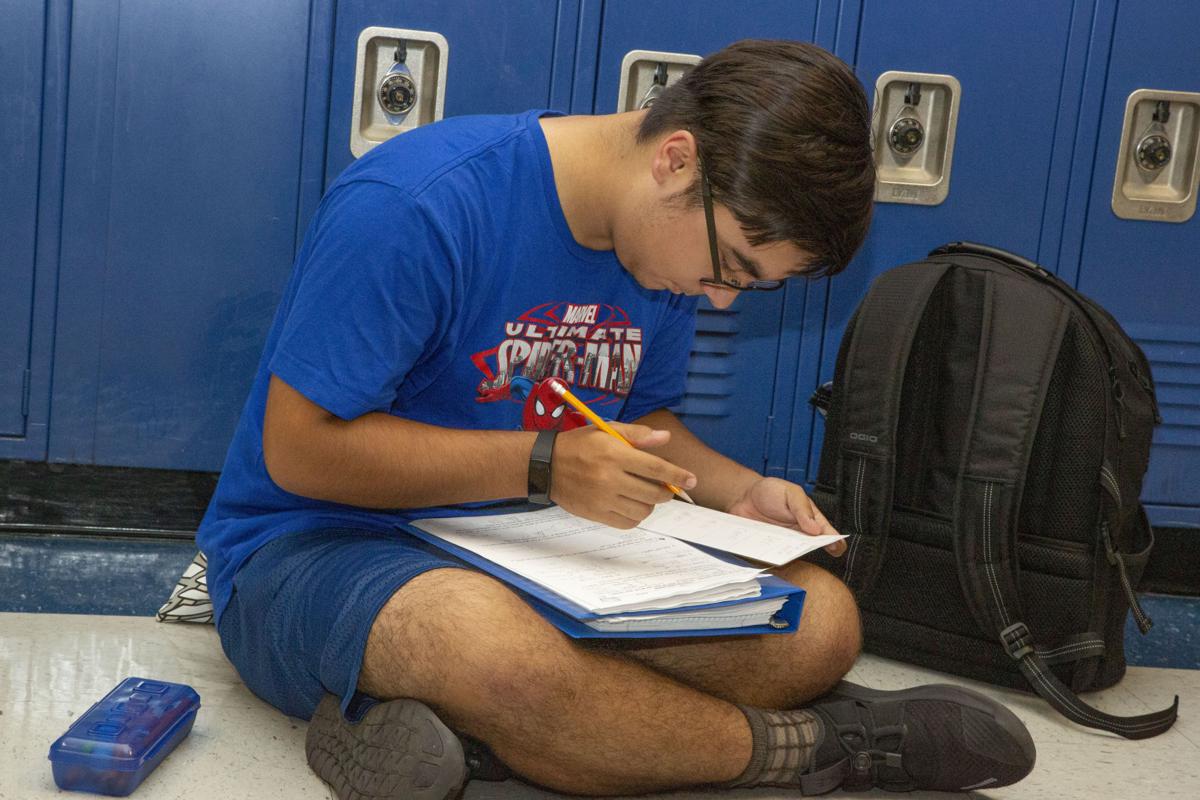 Max Lesson, a junior, catches up on homework during “one lunch” on Friday. 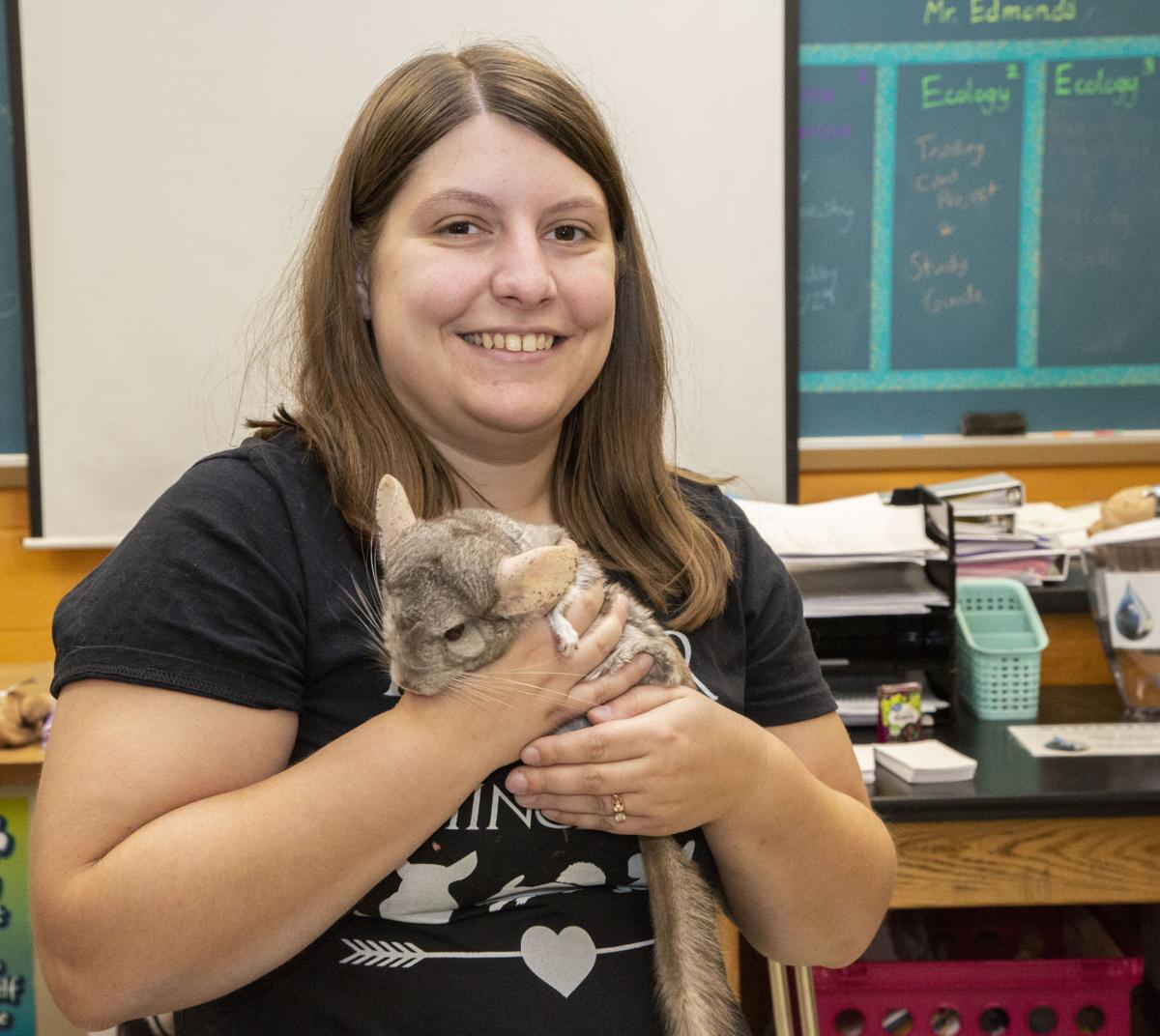 Ecology teacher Maegan Winkelmann welcomes students into her classroom from noon to 1 p.m. each day. The students really enjoy interacting with the animals, she said, including Liberty’s chinchilla.

Nathaniel Wilson, a junior, introduces Gracie Gonzalaz, a senior, to a corn snake in Liberty High School’s ecology classroom during their “one lunch” hour Friday afternoon.

Sophomores Derek Reece and Jairo Turcios relax and eat their lunch in the band hallway with freshman Julissa Sanchez.

Social studies teacher Dean O’Brokta had hall duty during “one lunch” on the second floor at Liberty on Friday.

Max Lesson, a junior, catches up on homework during “one lunch” on Friday.

Ecology teacher Maegan Winkelmann welcomes students into her classroom from noon to 1 p.m. each day. The students really enjoy interacting with the animals, she said, including Liberty’s chinchilla.

For a three-sport athlete like Emily Markley, the new trial “one lunch” at Liberty High School is working out well. She said the full hour allows her to eat lunch and then tackle homework that she has trouble getting done after sports practices. The junior, who plays golf, swims and plays lacrosse, appreciates the extra time during the school day to catch up.

On Friday afternoon, she was finishing up her lunch in the orchestra room with friends Margaret Hurst and Teagan Corpening. Teagan said she likes coming to the orchestra room to avoid the crowds. She also said she appreciates having a full hour for lunch, instead of the 30 minutes students had before, under the old system.

Margaret said that when she was scheduled for first lunch under the old system, it was way too early; eating from noon to 1 is better for her.

The girls explained that they sometimes use the one lunch period to touch base with teachers, about homework or scheduling issues. Teachers post “office hours” a few times a week when students can come in to talk.

Senior Chloe Lawson is not enthusiastic about the new lunch hour. “It’s unorganized and chaotic, really crazy. There are people everywhere. The other day I wanted to get help with my math homework during one lunch, but my teacher was in a department meeting, so I couldn’t.” (Some academic departments use one lunch time to schedule meetings.) Chloe was spending Friday’s one lunch in Gary Colson’s art room, working on a painting for Art IV.

Colson said he welcomes his students – and their friends – to his classroom. “It’s going to work out fine. I felt bad the first week or so. The students looked lost, wandering around with their blue lunch trays. I was also concerned at first about extra work for the custodial staff, with everyone eating everywhere, but the students have been good about cleaning up after themselves. We’ll figure it out.”

Social studies teacher Dean O’Brokta said there have been a few issues he’s had to address, but for the most part, it’s been positive. He said a lot of students come into his classroom during one lunch to talk. “I want my classroom to be a safe space for students to relax, or talk about current events.” But he said when his students’ friends join them, “they don’t always respect my space as my students would do. We’ve had to have a few difficult conversations.”

He added, “It is chaotic, but that’s not necessarily a bad thing. There are some kinks to be worked out, but I think on the whole it’s good for the students and the teachers.”

Sophomores Emma Costanzo and Sterling Payne were working together on a poster in a second-floor hallway. “I like having the time to work on homework,” Emma said. “And it’s good for club meetings too. For students who play sports after school, it’s more convenient.”

Junior Max Lessen was sitting on the floor in a second-floor hallway doing homework. He said that he had serious doubts about one lunch. “I was against it. I thought it would take too long to get your lunch, that the lines would be too long. I thought no one would be able to get their lunch, but that hasn’t happened. It’s working out OK.”

Principal Cox credits the cafeteria staff with managing the influx of students. “Everybody gets through the line in 15 minutes or so.” He added that some students wait a little before heading down. “If they wait until 12:15 or so, they can just walk through.”

Cox said he was nervous about instituting one lunch. “I don’t like chaos.” He said that before school started, he lost sleep worrying about how it would work, but added, “I’m sleeping better now.”

The idea came about, he said, when some of his faculty went to visit Kellam High School, an innovative school in Virginia Beach. “They came back and said we had to do this for our students. We talked more and everybody got behind it. So, I said, ‘Let’s go for it.’”

Cox said for the first few days, freshmen were released to the cafeteria 15 minutes early. The gradual introduction of one lunch seemed to allow everyone to settle in.

Cox said he met with student leadership after the first couple of days and they were not happy. “They really didn’t think it was working,” he said. “But by the third day, the tide had changed.”

He said he continues to get feedback from teachers and students, and he’ll continue to tweak the concept where necessary.

“We talked to the students about it during student assemblies and explained that this kind of freedom is a privilege. We said to them, ‘We are trusting you with this,’ but we could go back to the old system in a heartbeat.” So far, he said, the students have been stepping up and acting responsibly. “We are giving students the opportunity to make good decisions, and they are doing that,” he said.

He added, “I am constantly concerned with student safety, and there is so much drama, especially with social media,” so that is always a concern. “But teachers are stationed everywhere, and we have our student resource officer and our student safety officer.”

Cox said, “I love it that the kids can have lunch with their friends. It eliminates the stress of that and lets them spend time with teachers they have formed relationships with.”

Cox said that some teachers prefer to have a little alone time during one lunch, before opening the door to students, which, he said, “I certainly understand.”

Others, like Dean O’Brokta, prefer to allow students in any time. “I enjoy the interactions with the students,” he said.

Ecology and marine science teacher Maegan Winkelmann’s classroom is always busy during one lunch, she said. “The students love to take the opportunity to come and visit the animals.” Lizards, snakes and a chinchilla are a few of the animals that are enjoying attention during the new lunch system.

On Friday afternoon, lunch trays sat on classroom desks, clearly abandoned in favor of playing with the animals.

Hannah Rahrig, a senior, was spending time with Carson, a crested gecko. “I come here during lunch to see the animals,” she said, as she rattled off details about Carson’s proclivities.

Senior Gracie Gonzalaz was clearly charmed by a corn snake that Nathaniel Wilson, a junior, was showing her.

For some students, the lunch hour is purely about socializing. Sophomore Robin Morton and her friends perched on the window ledge of the landing between the first and second floors during one lunch on Friday. The huge windows and the chatting students give the space a distinctly cheerful vibe. “I think it’s a good change,” said Morton. “I’m here every day.”

At Liberty High School this year, all students and faculty have lunch between noon and 1 p.m. In previous years, lunch periods were staggered and lasted about 30 minutes.

Liberty Principal Sam Cox said the system was hard on the students because many couldn’t have lunch with their friends, and the lunch period was too short.

One lunch encourages students to spend their lunch time with whomever they choose, anywhere in the school they want – in the cafeteria, in the outdoor courtyard, the band room or a favorite teacher’s classroom.

Teachers post office hours during one lunch when they are available to offer academic help. Department meetings are also scheduled during this time. Students can arrange club meetings during one lunch, so they don’t have to meet after school, when other obligations may crowd their time.

I recommend all students to use best term paper writing service review to reduce the time spent on study. Thanks to their service, I was able to get an excellent mark for the year!