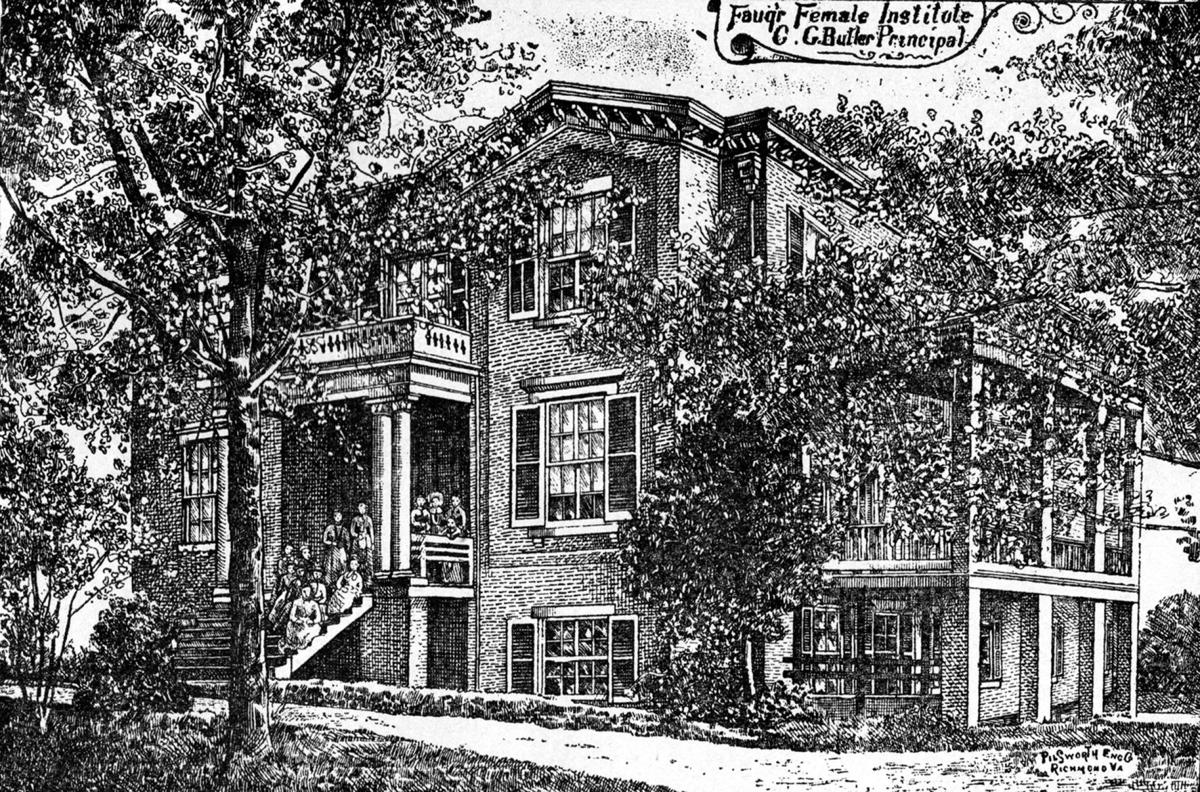 This drawing of the Fauquier Female Institute in the 1890s appeared in the brochure promoting the South Warrenton project. 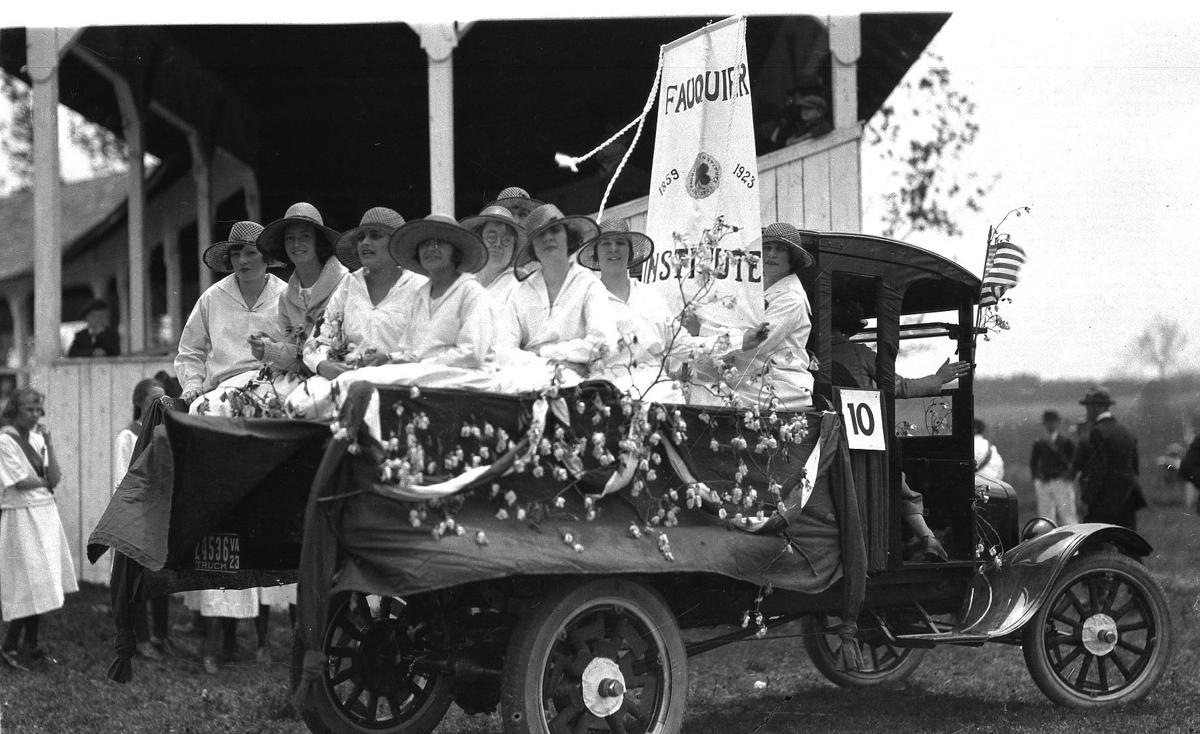 Students of the Fauquier Female Institute rode on this float in the Warrenton Day Parade in May 1923. The school closed two years later. 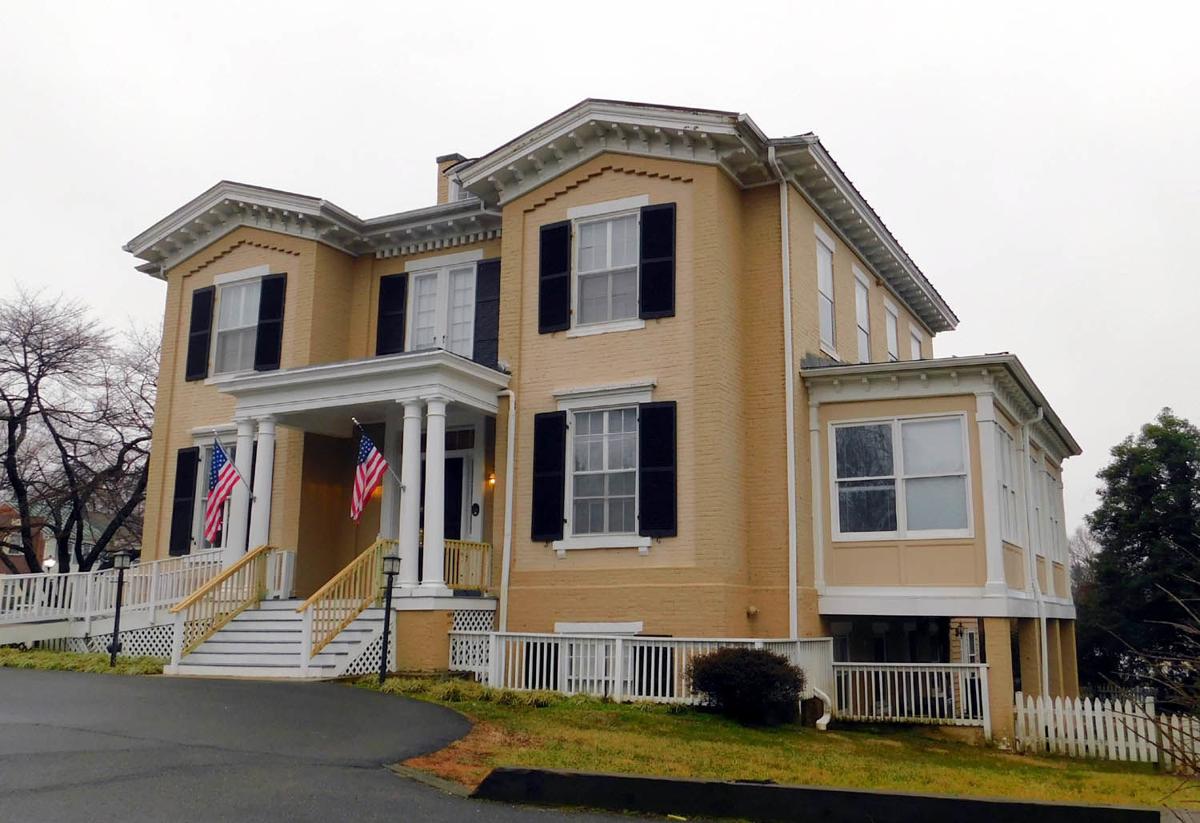 Known for the past several years as the “Lee Street Mansion” and surrounded by the Leeds Square townhouse community, the former Fauquier Female Institute still dominates Warrenton’s East Lee Street.

In the nearly 100 years since the school closed, the substantial three-story Italianate structure has served as a boarding house, apartment building, retirement home, and again as apartments.

Records from 1834 show that the property, then 7 and a half acres, was sold to William F. Philipps (1795-1869) by Robert and Elizabeth Brent. At the time, there was a brick house located on the tract.

In early 1857, Philipps sold the property to a group of investors interested in establishing a girls’ school on the site, which was to be called the Fauquier Seminary. They had the option of starting the school in the existing building and expanding, but had bigger plans: a large schoolhouse surrounded by pleasing landscaping and trees.

Warrenton contractor John R. Spilman was selected as the builder, and by the end of 1857, the school was ready to accept students. Notable architectural characteristics included “… a low-pitched hip roof, four tall center-interior chimneys, outstanding projections, gabled pavilions, corbelled brickwork and bracketed eaves,” according to Cheryl Hanback Shepherd in “Warrenton Virginia, a Unique History of 200 Years” (2010).

The first principal was a Dr. Bacon, who served until after the Civil War. It is believed he was followed by the Rev. H. H. Wyer of the Warrenton Presbyterian Church. The property changed hands, and in 1871 it was sold to John A. Spilman and Dr. Robert Frazer, who ran the school and became the sole owner in 1877.

An advertisement in “The Solid South,” a newspaper published in Warrenton in 1877, stated that for the upcoming session starting Sept. 3, terms were board and tuition $200; students in the Primary Department paid an additional $30, the Intermediate Department $40, and the Collegiate Department, $50. There was also a $50 charge for music classes.

Frazer later left Warrenton and was appointed U.S. Consul to Palermo, Italy. He was succeeded by Rev. Dr. J. A. Chambliss who served for two years; a northern lady named Miss Barnes and her brother, and then the Rev. Alexander Fleet.

It is remembered that Butler had a private boarding school in Pottstown, Pennsylvania, where one of his students was Miss Carrie Ballestier of Rochester, New York, who later became the wife of novelist and poet Rudyard Kipling.

Early during the Butlers’ administration of the school, the Good Will Circle of the King’s Daughters of Warrenton was organized at the Institute, and Edith Butler served as president of the organization for more than 40 years.

Warrenton native Lizzie M. Evans (nee Jordan) (1860-1931) was a student at the Fauquier Female Institute in the 1870s, and after marrying and living in North Carolina, returned to Warrenton during the summers with her husband DeLancey and daughters M. Louise (1887-1966) and Ida Pollard Evans (1866-1966).

Louise Evans recalls visiting Warrenton during the summer of 1899 and boarding at the Institute.

“The session before had not been too profitable for the Butlers, so they threw open the school for summer boarders,” she recalled in an article published in “The Fauquier Democrat” on May 19, 1949. “It was soon filled with some truly delightful guests from Baltimore, Washington, Norfolk and other places in the state. The lovely grounds were hung here and there with hammocks and swings, and there was lots of entertainment for young and old.”

The Evans family moved back to Warrenton permanently in 1904, and at that point the Institute was operating at full capacity. Louise, then 17, was often invited to regular school dances and entertainments at the Institute. In turn, students were permitted to visit the Evans home on Main Street, “certainly well chaperoned,” she explained.

Misses Elizabeth Hutton and Lavinia Hamilton, both life-long residents of Warrenton, were two of the four girls who graduated from the Institute in 1911. There were about 50 girls enrolled there at the time, about half whom were boarders.

Another boy, Douglas MacArthur (1880-1964) was a summer visitor in the early 1890s, when he and his brothers and his mother, Mary Pinkney Hardy MacArthur, were staying at “Fairhaven” on Culpeper Street, home of Mrs. MacArthur’s sister, Emily H. Fair. Later in life, Douglas MacArthur was a five-star general in the U.S. Army and a hero of World War II and the Korean War.

According to Miss Hutton, the basic fundamentals of education were taught there – the Three Rs” – and the girls were required to memorize poems. “Many times, I knew a poem by heart, but didn’t really understand what the poet had in mind when he wrote it,” she explained.

Language studies were a choice of French or Latin, and history and geography were also offered. The only science course Miss Hutton remembered was psychology.

The most important event at the Institute during the year was the annual Commencement. “Long before the hour set for the exercises, the school room was packed to its capacity,” wrote Louise Evans, recalling “… the excitement, the hum of many voices, the buzz, the violins being tuned, and then the long awaited moment when the hall was silenced for the first number on the program, generally a well-trained chorus, was announced. It was truly a community celebration, popular, largely attended and long appreciated.”

Butler died in 1908, and in January 1915, Barry’s heirs sold the Institute property to Warrenton businessmen Herman and Joseph Ullman.

Nellie Butler served as principal, and assisted by Edith, continued operating the Institute until they gave it up in 1923. Three teachers who stayed on attempted to keep the school going, but by 1925, the effort had failed and the school closed.

Nellie died in 1925. Edith Butler continued to live in Warrenton, where she was remembered for her charity work and dedication to St. James’ Episcopal Church. She died at the home of her sister, Sue Butler Craig, on Main Street in March 1939.

The Ullmans remodeled the school building as a boarding house, which they operated until selling the property, then 9 acres, to Mr. and Mrs. Vincent O. Jacobs. During their ownership, many improvements were made to the grounds and the building, which became apartments. Louise Evans recalls that there was always a long waiting list for the Jacobs’ apartments there.

In 1972, Mrs. Jacobs sold the property to the Permanent Financial Corporation, and the property around the Institute was developed by David L. Ferguson as Leeds Square, a townhouse community.

In late 2005, the property was sold to Warrenton businessman Malcolm W. Alls, who made extensive improvements and brought the building back as the Lee Street Mansion.