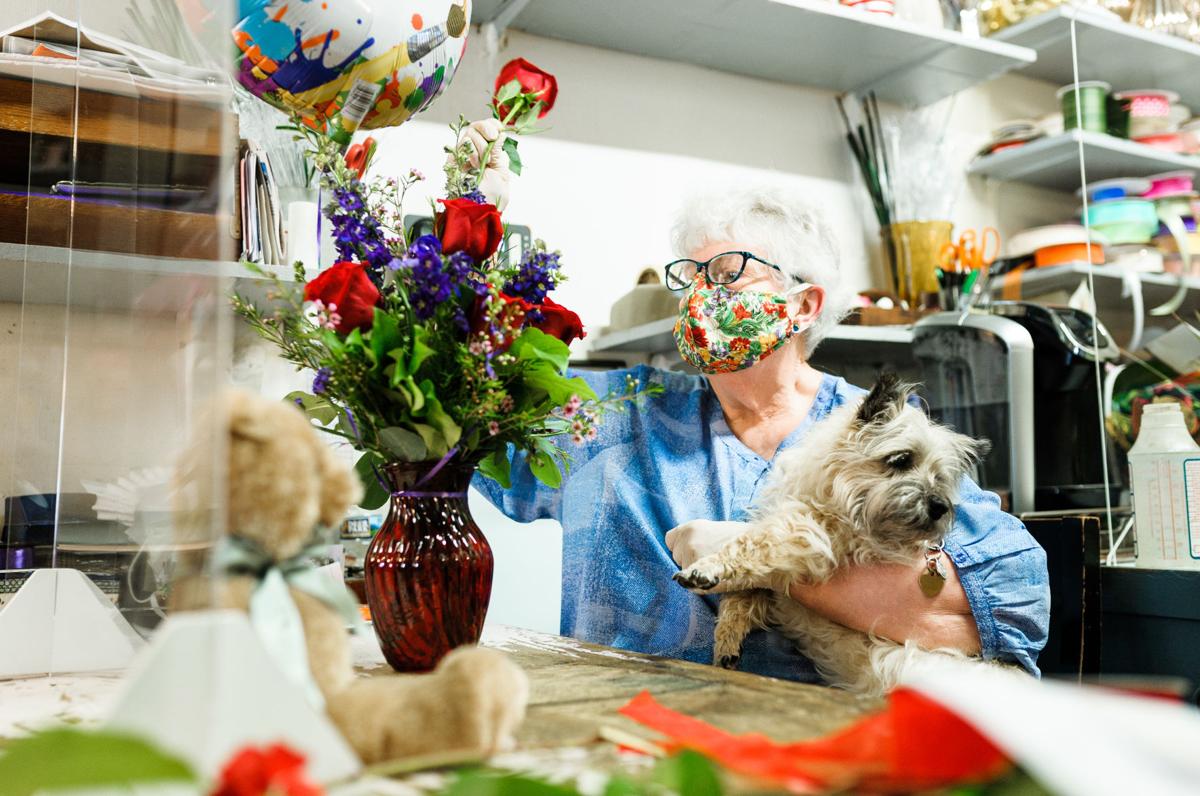 Dawn Borusky, owner of Village Flowers in Old Town Warrenton, works on an arrangement of roses with her dog, Bree 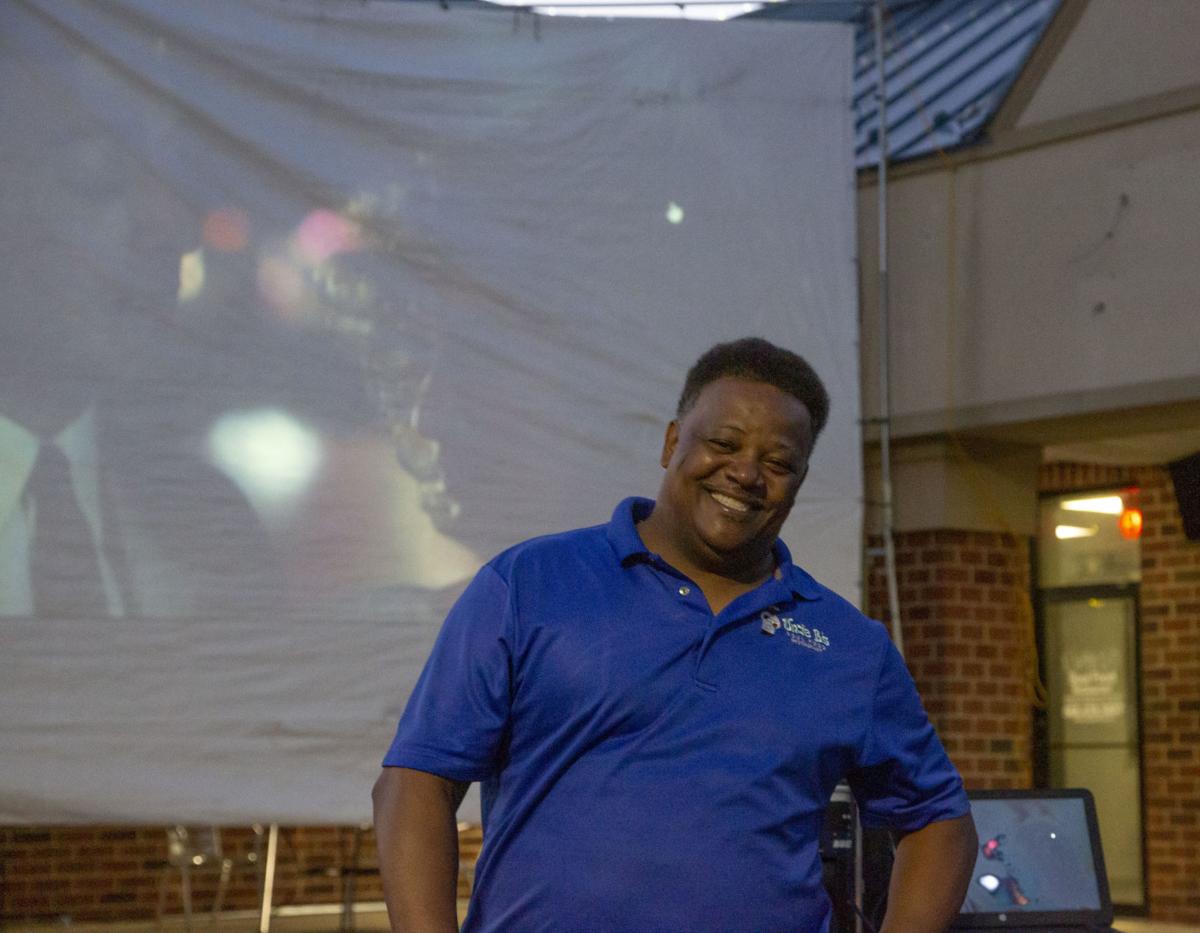 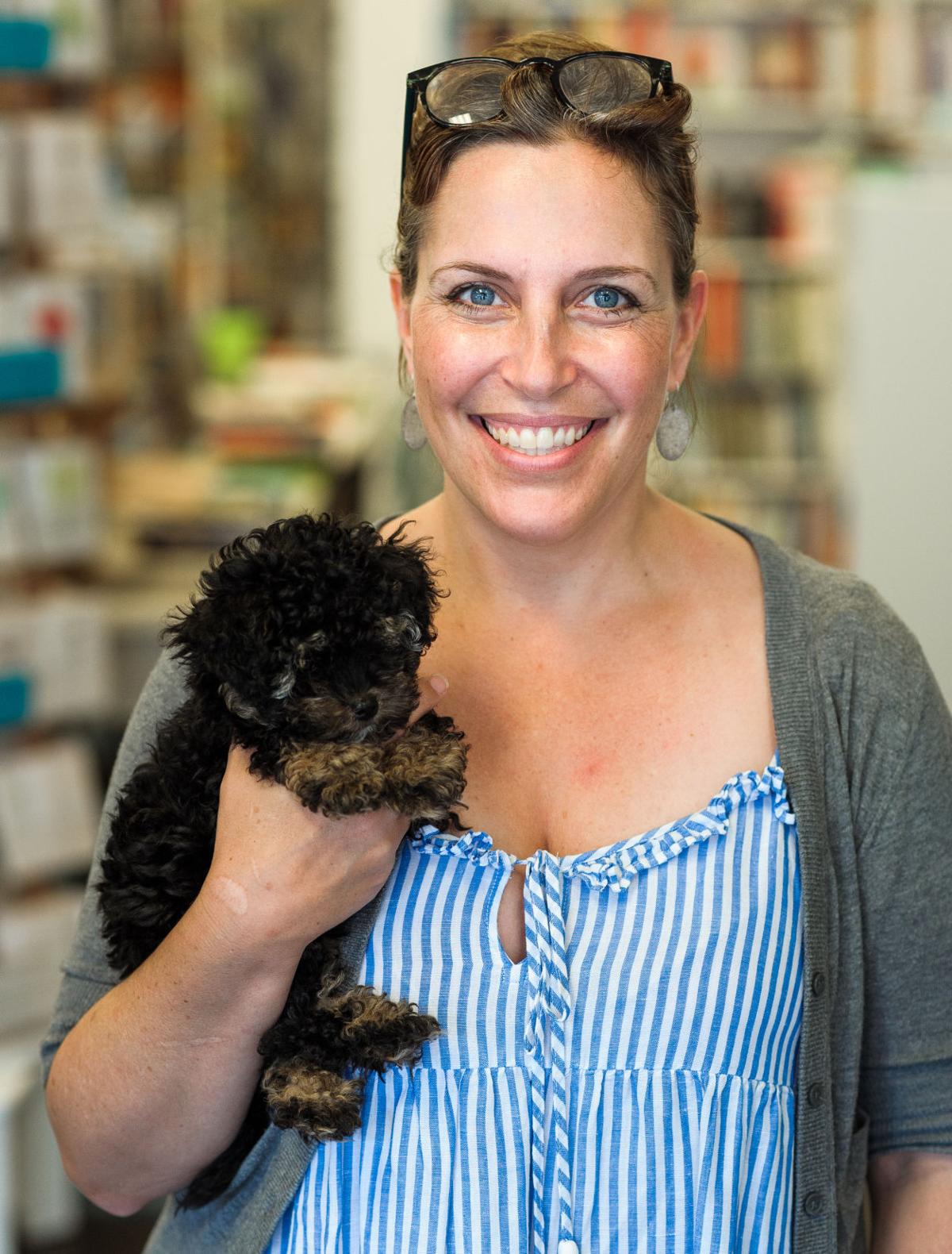 Cammie Fuller with her puppy, Poppins, in the Old Town Open Book in Warrenton.

It’s an old saying: A friend in need is a friend indeed. For some small businesses in Fauquier County that have been shut for weeks during the pandemic, their landlords have turned out to be good friends indeed.

That’s what florist Dawn Borusky found. She has owned and operated Village Flowers in the old firehouse on Main Street for 33 years.

“Our landlord told us that if we could not pay the rent, do not worry about it. I called and told him I was concerned because we had to close down. He stopped me and said, ‘Dawn, whatever you need, you’ve got. Do not worry about it,’” she related.

That landlord is Scott Humphrey, who heads the R.L. Kane property management company in Alexandria and who was part of a group that purchased the historic firehouse in the 1970s. “My wife and I try to support downtown Warrenton in every way we can,” said Humphrey, 88, whose family also owns a farm in Fauquier.

Borusky is “an absolutely wonderful person who does things maybe a lot of other tenants don’t do, making sure the building is safe and secure,” said Humphrey. “I did the same thing with the other tenants in the building.”

He admires the entrepreneurial spirit of small-business owners who “are not interested in the security of a paycheck and don’t always have very much money (to start) … but they work really, really hard to gain equity in their company.”

Nationally, not all landlords have been so forgiving, nor were businesses, big and small, able to keep paying their rent. The Washington Post, citing data collected by Datex Property Solutions, reported that fewer than 60 percent of retailers paid their rent on time in May.

Customers are rallying behind favorite businesses as well.

Restaurateur Stan Heaney opened the Corner Deli in Remington 32 years ago and purchased the building 15 years ago, but still has a mortgage to pay. Take-out orders became its mainstay.

Help came from a longtime customer, Steve Payne, the owner of This n’ That Amish Outlet north of Warrenton, who lent Heaney four big picnic tables to put in his parking lot to give customers a place to eat. “We never had picnic tables before, but he’s been a real good friend to many people in Remington for years,” including the fire and rescue company, said Heaney.

Payne owns Amish outlets in Leesburg and Winchester, too, and is opening a new downtown Warrenton shop this week. When the Corner Deli no longer needs the $1,000 tables, they’ll go back to This n’ That Amish Outlet for sale. Heaney is keeping them spruced up. “We go out and wash them every half hour,” he said.

“We have a wonderful landlord. He cut the rent by 75 percent, with no obligation, no IOU …. he doesn’t want us to go away,” said Fuller, who has a three-to-five-year lease.

The owner of her store and most of the commercial property on that block of Main Street is John Capetanakis of Arlington, Virginia. “I consider this a partnership between myself and the tenants. If they do well, I do well. That’s my philosophy,” said the self-effacing businessman, who has a Ph.D. in electrical engineering from MIT.

“You get to know these people, the tenants. When the pandemic hit, all of a sudden in a week or two weeks, things went very bad. I think it’s going to take months to get back to where they were,” he said.

He is still discounting the rents, although at the moment “they are not covering my costs,” including the county tax bill.  But “if they have no customers, what are you going to do? I’ll work with them,” Capetanakis said.

The doors at The Open Book are open again for customers, two or three at a time. Online sales helped Fuller through the past few months, and she even delivered books to customers’ homes. “The community rallied and a lot of orders came in, with people telling us they didn’t want us going anywhere,” she said.

Bernard Northam, the proprietor and chef of Uncle B’s Soul Food in Bealeton, was accustomed to drawing big crowds to karaoke nights on weekends, as well as diners who came for fat pork chops and other delectables. Now his family and staff carry food out to customers who tailgate in the parking lot and watch movies projected on a newly purchased 20-by-30-foot screen.

“We have a lot of fun,” said Northam, 58 (no relation to the governor). “That’s the joy of not franchising. You can push the envelope. We try to do whatever the clientele is looking for – as long as it’s legal.”

Northam’s landlord didn’t cut the rent but allowed him to pay half twice a month without late charges. “He’s very understanding,” the proprietor said.

Philip Mulford, an attorney and sole proprietor of Mulford Mediation, which provides families facing divorces a less adversarial way to resolve disputes, never approached his landlord about getting a break on the rent, although his business is off 70 percent. “That didn’t even cross my mind,” said Mulford, who’s rented the office above the Black Bear Bistro on Main Street in Warrenton since 2000. “It doesn’t seem fair to them. They still have the mortgage and expenses to pay,” he said.

Richie Parsons, owner of Anytime Fitness franchise in Warrenton Village Center, decided not to accept relief on the rent that the landlord offered all the tenants, including a Chipotle restaurant. Gyms were brought to a standstill by the governor’s stay-at-home order. The offer “was one size fits all, take it or leave it,” said Parsons. “For other tenants, it might have been a good deal, but for me it was not ideal.”

Parsons began occupying that space 13 months ago, not long enough to “build up history of good will and rapport with (the landlord). For us to turn around and say, ‘Hey, 13 months in, now I need a break,’ that could have been problematic for them. They still have a mortgage to make.”

The former political consultant and congressional aide owns another Anytime Fitness franchise in Bridgeport, West Virginia, which has been open for six years; there he did get a break on the rent. Parsons said, “We have a long history with that landlord of payments on time, demonstrating a track record of being responsible and dependable, so when it came time for us to ask for help in a way we never had before, I think they were more inclined to be responsive.” They renegotiated the lease terms and signed the renewal early, he said.

Warrenton’s Anytime Fitness is now back open with new safety protocols and limits on how many people can work out at one time. Business is about half the previous level, but some customers have been eager to get back in and resume workouts and new customers are signing up. “A lot of people realize it’s not just about looking and feeling good, it’s about being healthy and less susceptible to illnesses and disease,” the owner said.

In difficult times, there’s another apt saying that applies to small, enterprising businesses: It’s an ill wind that blows no good.

Field & Main Restaurant in Marshall, once open for dinner only, quickly pivoted to a thriving takeout business, including lunch burgers and sandwiches and home-style meals that customers can take home and reheat for dinner.

Proprietors Neal Wavra and his wife pay rent to the investment group that bought the building when they opened the restaurant in 2016. “Basically, they hold the mortgage. When this happened, they allowed us to sunset the payments. We did that for about a month, but then we caught up,” said Wavra.

Fourteen of his 20 employees are on the job, and the waiters will return in July when the restaurant reopens its dining room.

“I’m not running a super-efficient operation at the moment, sort of intentionally,” said Wavra. “I have more (staff) than I need, but I want them here, working and drawing a paycheck.” He plans to continue selling lunches to go and operating a retail market selling wine, fresh produce and some prepared meals -- even when customers are back in the 80-seat dining room ordering entrees cooked over the 10-foot-wide, wood-burning heath.

“We had some of these ideas before,” he said. The pandemic “provided the opportunity to try them out.”

Christopher Connell is a freelance writer, working with the Piedmont Journalism Foundation.