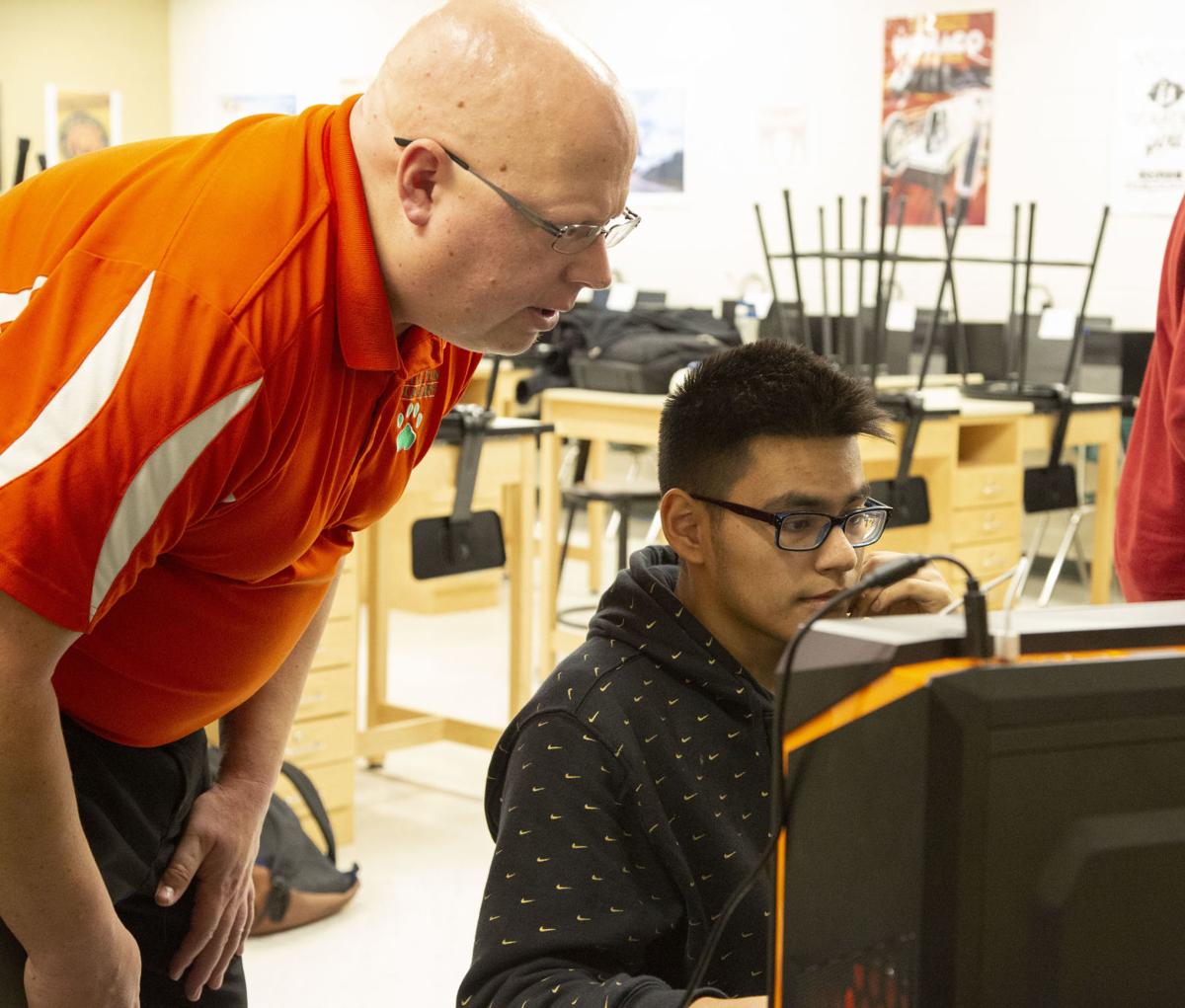 Coach Kurt Mergen and player Felipe Gutierrez talk strategy. Gutierrez is a member of Kettle Run’s second-tier team. He was present during the quarterfinals match to support the team. 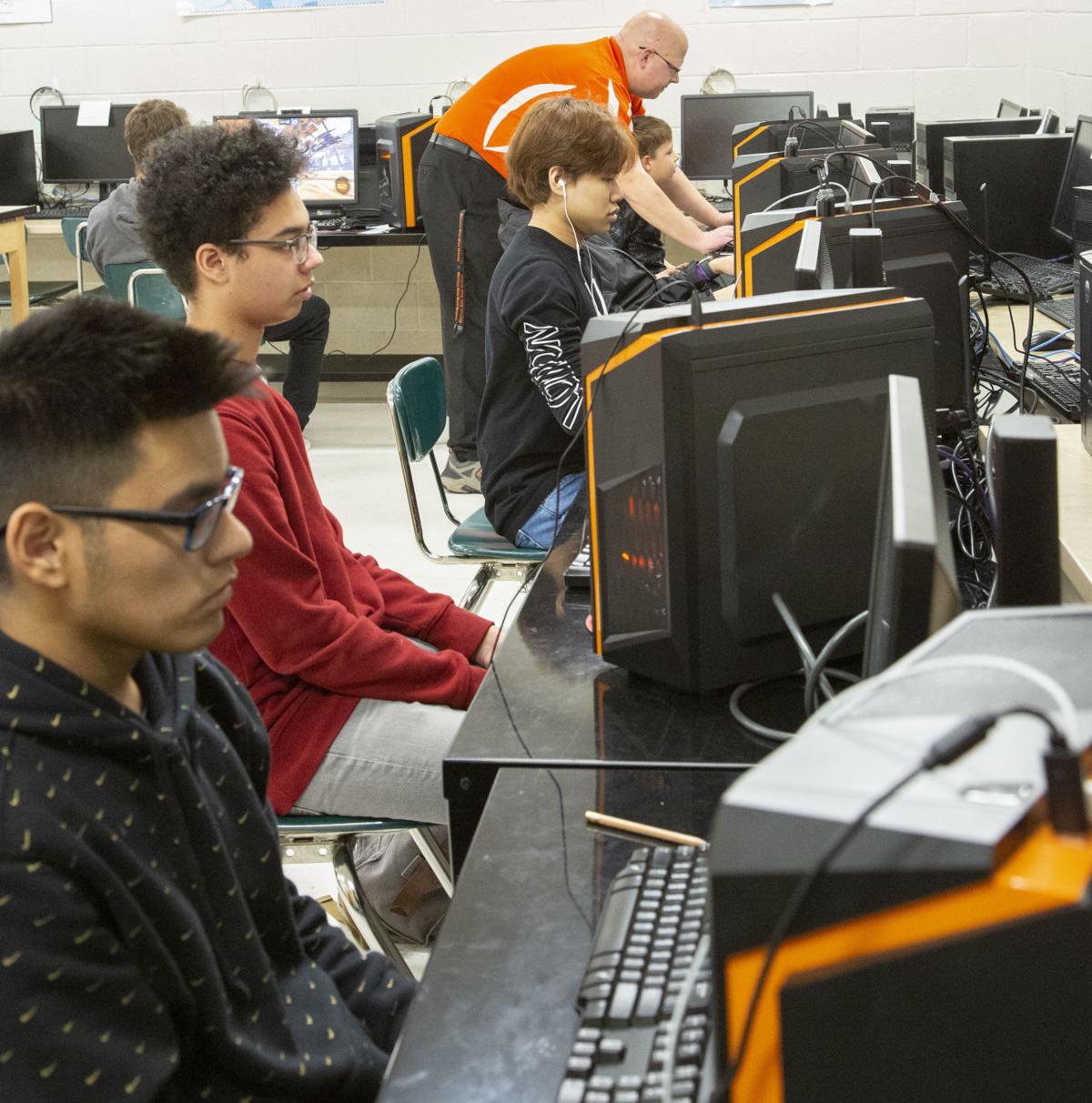 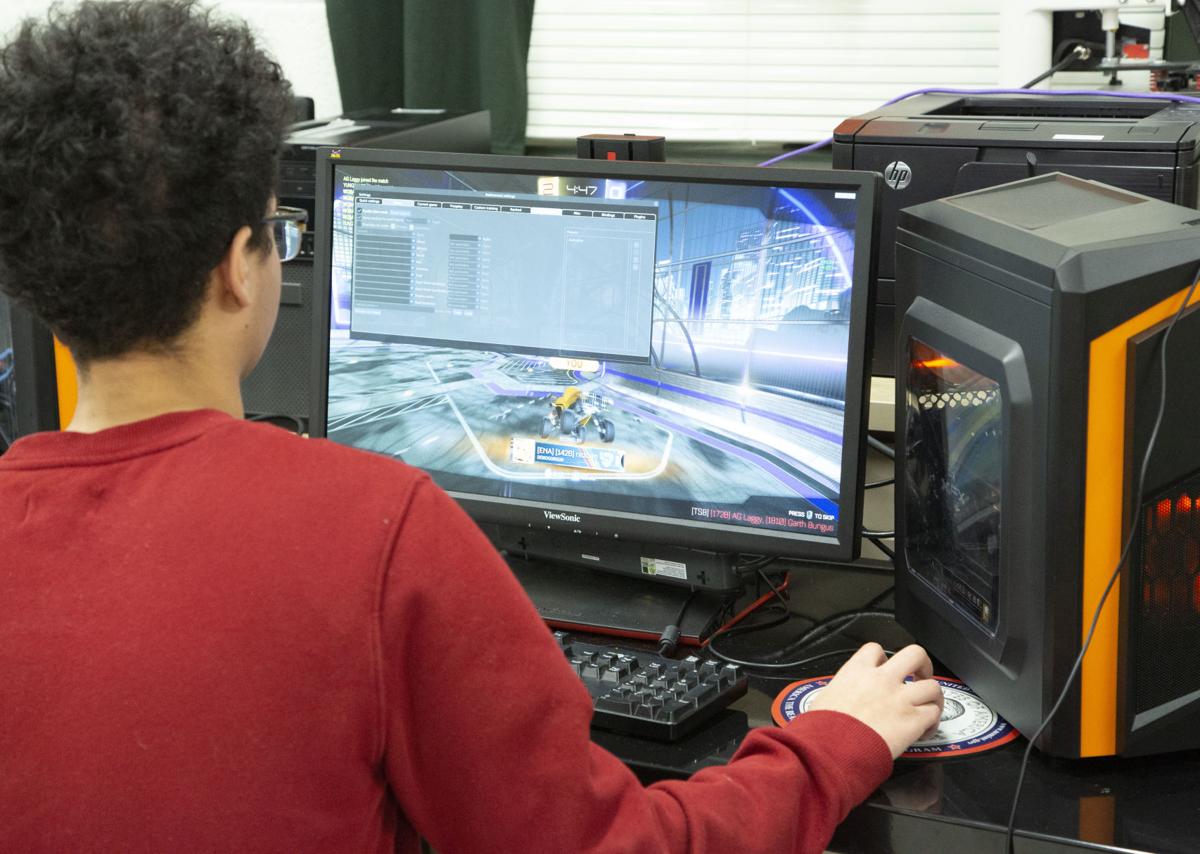 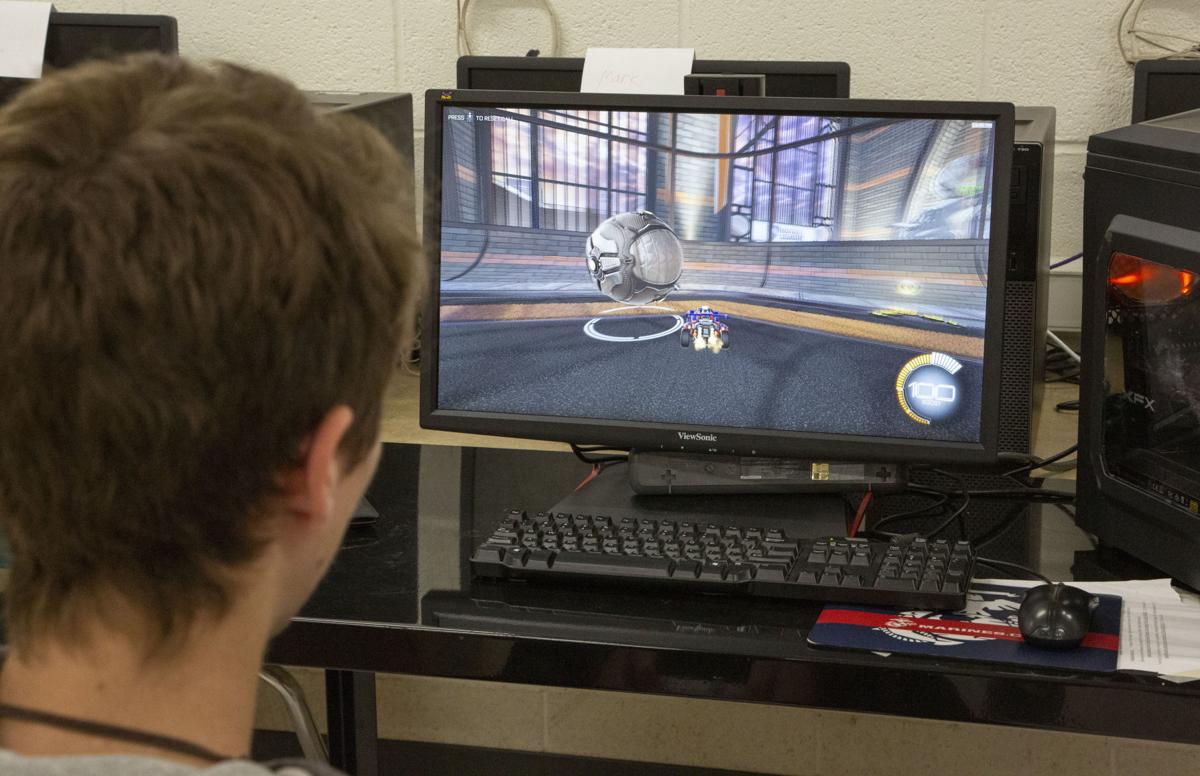 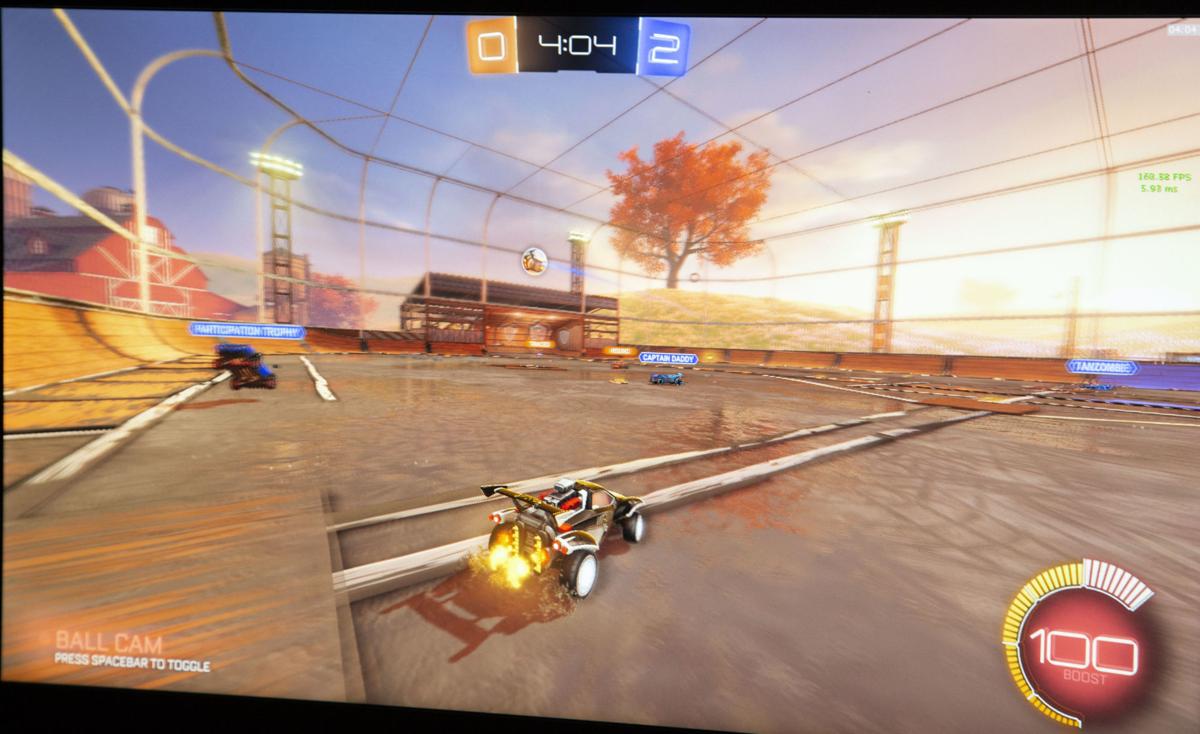 Rocket launch is described as “soccer with cars.”

Coach Kurt Mergen and player Felipe Gutierrez talk strategy. Gutierrez is a member of Kettle Run’s second-tier team. He was present during the quarterfinals match to support the team.

Rocket launch is described as “soccer with cars.”

In this particular quarterfinal high school match, there were no emotional moments of helmet bumping or end zone celebrations. No uniforms or bleachers, either, and no running or jumping. The only balls were one-dimensional. -- on screens in front of the players.

During the first match of the VHSL-sponsored esports playoffs at Kettle Run Thursday, Jan. 9, the atmosphere was decidedly understated, but there were moments that elicited cheers. Not long after the opening bell of the first Rocket League match, two Kettle Run teammates crashed their cars, catching a giant ball between them. The ball was squeezed tight; under the pressure it shot clear across the playing field. It was unclear whether the move was the result of clever strategy or a happy accident, but either way, it was apparently a good thing. A rare moment of celebration broke out in room 204.

The celebration was predictive. The Kettle Run squad won the match and is headed to the state tournament at Shenandoah University on Jan. 18.

Kettle Run esports coach Kurt Mergen said that the school piloted a program in the fall of 2018 with 19 students. That spring, the number doubled. For the fall 2019 season, 47 students were on the roster.

Mergen describes himself as a liaison rather than a coach. “The kids are leading the way; I’m just here to facilitate.” He volunteers his time on Tuesdays and Thursdays when the teams meet to practice.

Kettle Run has four teams that play Rocket League (three players each) and League of Legends (three teams of five players each); Liberty High School plays as well, and also has a team that plays the game Smite. Fauquier High students have expressed interest, but there is no esports team there yet, said Mergen.

He said that the goal in esports is to remain calm and collected; concentration and strategy rule.

The skills the players develop, he said, are cerebral. “They learn strategy, decision-making, risk-reward skills. They develop self-evaluation and reflective skills as well. Physically, they develop finely tuned motor skills and reaction time.” And because it doesn’t matter how tall or how strong a player is, “video games are equalizing.”

Mergen also stressed the value of consistent practice. Some students have more than 4,000 hours of game play logged. Mergen said, “This generation of kids, they are told that the things they like to do are bad. The team validates what they are doing; they may be able to develop what they learn here into viable skills – like piloting a drone.”

Alex Hohn, 11th-grade Rocket League player, said, “The Kettle Run esports program is very innovative and provides a welcoming environment … It gives an opportunity to compete and have fun to students who enjoy playing video games.” He added, “Esports provides a legitimate opportunity for friendly competition for students and is almost always an accepting and beneficial environment for students who enjoy competitive video games …”

He said there is value in “the community and team dynamic that is provided with esports, as well as the opportunity to get better and compete against other schools in a league format.”

Senior Rocket League player Michael Dao said, “[the team] gives people … a feeling of playing on a team for those who don’t play sports or do any other extracurriculars that involve teamwork.”

Matt McNeil, a senior and a member of the winning Rocket League team, mused, “This may not be true, but I feel many people who partake in and commit to esport activities enjoy the comfort of their home. … Being a part of a team consisting of people in real life allows for a more solid relationship. This is not to say online relationships are worthless; however, seeing people in real life comes with a different feel and deeper relationship. So hopefully, with this deeper relationship or understanding, there is better teamwork and overall, a better performance.”

Mergen teaches AP calculus and AP computer science classes and has found that some team members sign up for his classes because they know him as the esports coach. “It’s not measurable, but it may open them up to new opportunities.” He added that video gaming does not directly translate to computer science skills, but many gamers have, out of necessity, become their own tech support.

He said 12 players play on one afternoon, 15 on another. The computers are high-performance machines. Some players use keyboards and mice; others prefer controllers. Mergen said that computers were purchased in components and assembled by the team members.

“That was harrowing,” Mergen remembered.

At first, the team was playing in a room that had big screens so visitors could follow the action, and a few supportive parents would come to tournaments. But Mergen said the team got too big for that room; those interested can follow the game play online.

In the future, Dao said, “I would love to see the program … get a dedicated room for our club and equipment so that we don’t have to move our computers from one computer lab to another to play.”

McNeil agreed that he’d like to see the team have a dedicated room. “I think this concept -- video games as a competitive sport -- is not taken as seriously as it could be, even by people who include themselves in such programs. … A dedicated room to the esports program … could provide more awareness to the program …”

Hohn added, “I would love to see more funding and attention from the school board, and [have] more people try to understand the benefits of esports ...”

Mergen would like to see compensation for teachers who choose to lead esports teams. “Esports is a valuable way to engage kids. Coaches need to be compensated for their efforts. I have three 7-year-olds at home. It’s tough to justify the time I put in to my kids or my wife, without compensation.”

Dao and McNeil are all open to playing esports in college, so long as it doesn’t interfere with their academics. Hohn said, “I would not be opposed to working for an esports organization and involving myself in the scene, but likely not as a player.”

Mergen is seeing interest in esports surging. At the big tournaments, he said, there are big screens and pageantry and play-by-play broadcasters. He’d like to see the school system continue to support the program as interest grows.

“I haven’t had them do gamer yoga yet, but it exists,” Mergen said.