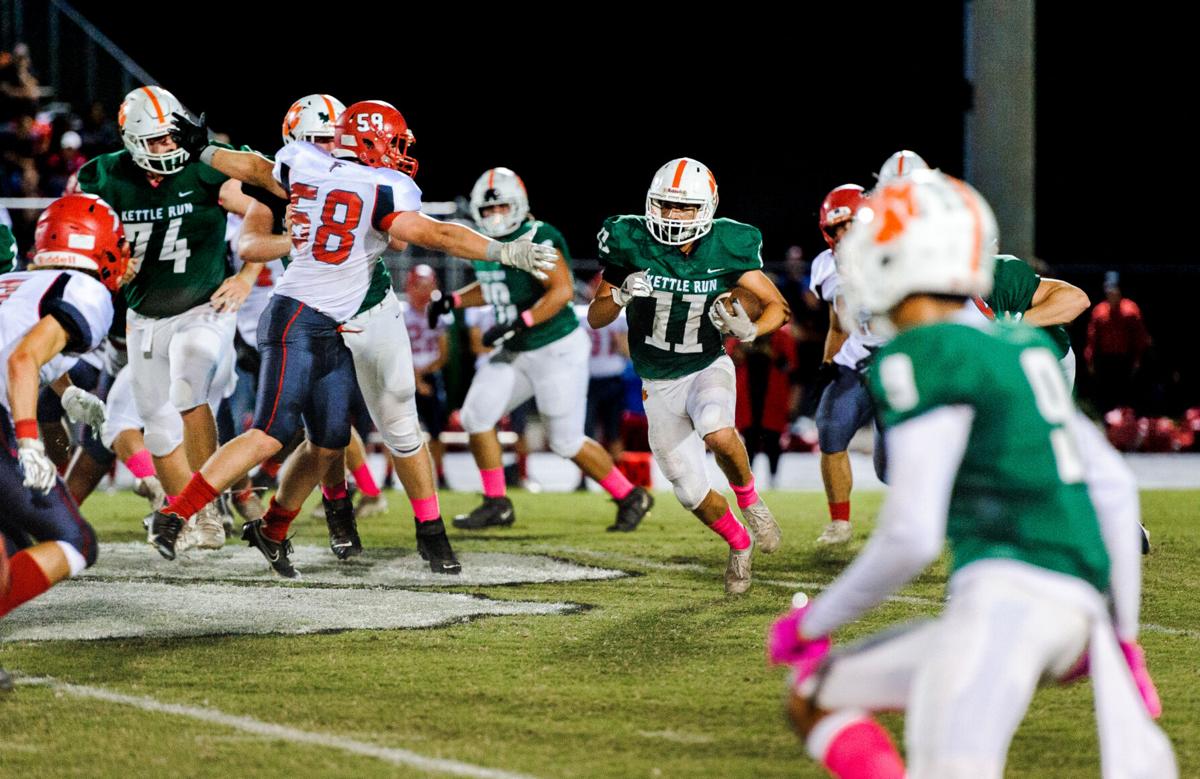 Andrew Strickland (No. 11) ran eight times for 102 yards and Kettle Run’s final touchdown of the night in a 41-0 win over Fauquier that moved the Cougars to 3-0, just ahead of 2-0 Handley. 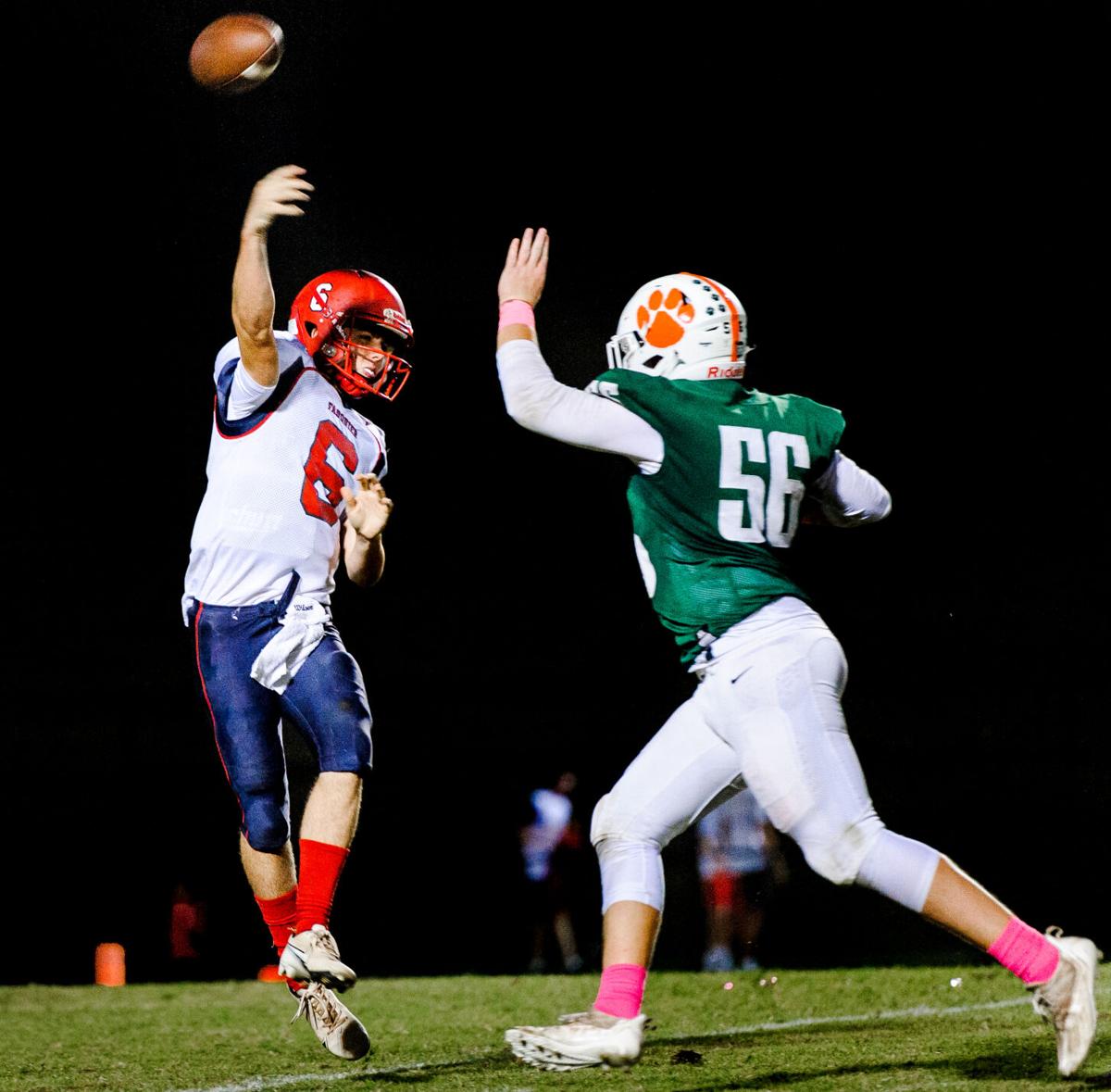 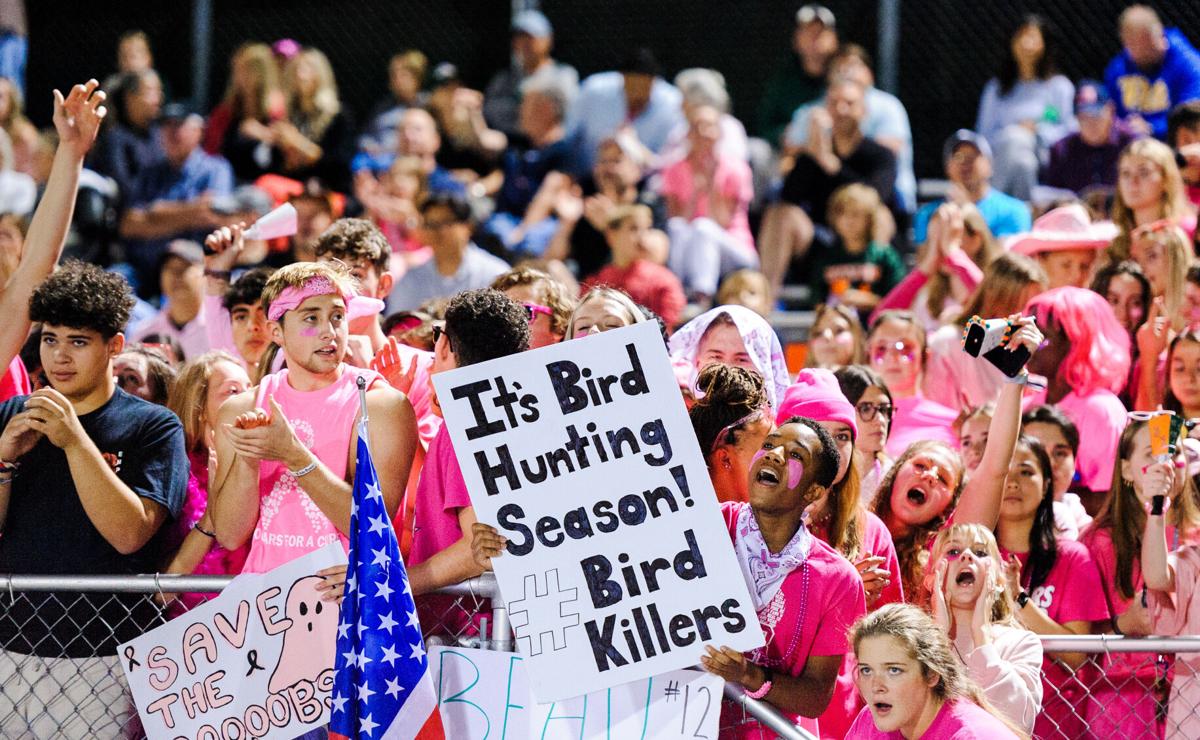 Andrew Strickland (No. 11) ran eight times for 102 yards and Kettle Run’s final touchdown of the night in a 41-0 win over Fauquier that moved the Cougars to 3-0, just ahead of 2-0 Handley.

Could up-and-coming Fauquier hang with district-leading Kettle Run (6-1), and for how long?

Fauquier (2-5) moved the ball well on their opening drives, but when those two efforts fizzled, it was up to the capable Falcon defense, which ultimately proved overmatched.

Using a lethal combination of running and passing, Kettle Run scored touchdowns on its first three drives to build a 20-0 halftime lead and coast to a 41-0 victory before a large home crowd on Pink-Out Night.

Kettle Run now leads the series 10-5. It was Kettle Run's second biggest win margin over Fauquier, falling just short of a 42-0 win over FHS in the 2011 playoffs.

“We didn’t compete as much as we needed to. The end result is what it is,” said Fauquier coach Karl Buckwalter. “We’ll go back to basics and continue on our path.”

The back-to-back wins over the Eagles and Falcons gave Kettle Run the unofficial county title for the second season in a row, but more importantly moved them a step closer to clinching one of the four postseason berths out of the Northwestern District.

Kettle Run may have played its finest game of the season as quarterback Beau Lang’s passes looked exceptionally sharp, and a combination of running backs and receivers gave the Cougars’ offense balance.

“I think as a whole, all together, it was our best game probably,” said Kettle Run coach Charlie Porterfield. “Some mistakes were still made. The thing I’m proud of is that following the short season, there’s not been any lull. The guys and girls keep coming out to work.”

On a 71-degree night with scores of students dressed in pink to support breast cancer awareness, the scene was lively. The game was so crowded, late-arriving fans found no parking spots and needed to turn around and go back to the faculty lot near the front of school.

Fauquier started well, gaining a first down on its opening possession and moving into Kettle Run territory, but quarterback Ben Noland was sacked and the Falcons punted.

Kettle Run then drove 69 yards to make it 6-0 as Lang hit Jacob Robinson for a 16-yard TD on a post route to the left side.

Bidding to respond, Fauquier again moved into scoring position earned on a 29-yard gain by up the right sideline by Craig Allison off a Noland pass, but Cougar Sam Rodgers ended that threat with an interception.

Kettle Run went 70 yards in two pass plays as Lang hit Robinson for 18 yards, then threw a short pass to Jordan Tapscott, who ran over a defender en route to his 52-yard TD. Ella Slevin’s extra point kick made it 13-0 with 1:20 left in the first quarter.

“They have two kids that are dynamite receivers and we couldn’t handle them,” said Buckwalter of Robinson and Tapscott. “Their quarterback is good, too. They have two weapons on each side. They are a good team. They do not make mistakes and they make you make some.They do a nice job.”

Fauquier’s Noland connected with Wesley Heflin for a 34-yard gain on the ensuing possession, but again the drive faltered as Noland was sacked at the KR 32 and a fourth down run was short.

Kettle Run kept the pressure on with a third straight TD as Lang hit Robinson on a crossing route for a 21-yard TD as the lead increased to 20-0.

Fauquier reached the Kettle Run 21 on its next drive, but it ended with a fake field goal attempt incomplete pass by backup QB/holder Banks Massey into the end zone.

Kettle Run took the second half kickoff and scored again as Colton Quaker ran 64 yards for a TD. Quaker showed power and speed as he burst up the middle, then got to the sideline, helping the lead jump to 27-0 with 9:59 left in the third.

Kettle Run added another third quarter TD on Lang’s 10-yard run, and its last TD early in the fourth on a 1-yard run by Andrew Strickland with Kelsi Navin adding the extra point for the 41-0 final.

Fauquier got no first downs in the second half. The mercy rule kicked in for the final xx minutes.

“As a coach you have to wrap your head around what happened and figure it out and go back to basics. You re-teach everything and get better,” said Buckwalter.

Buckwalter says the Falcons still have a lot to play for. His squad has a great chance to beat Liberty in the Nov. 6 Bird Bowl. And the top four in the district make the playoffs.