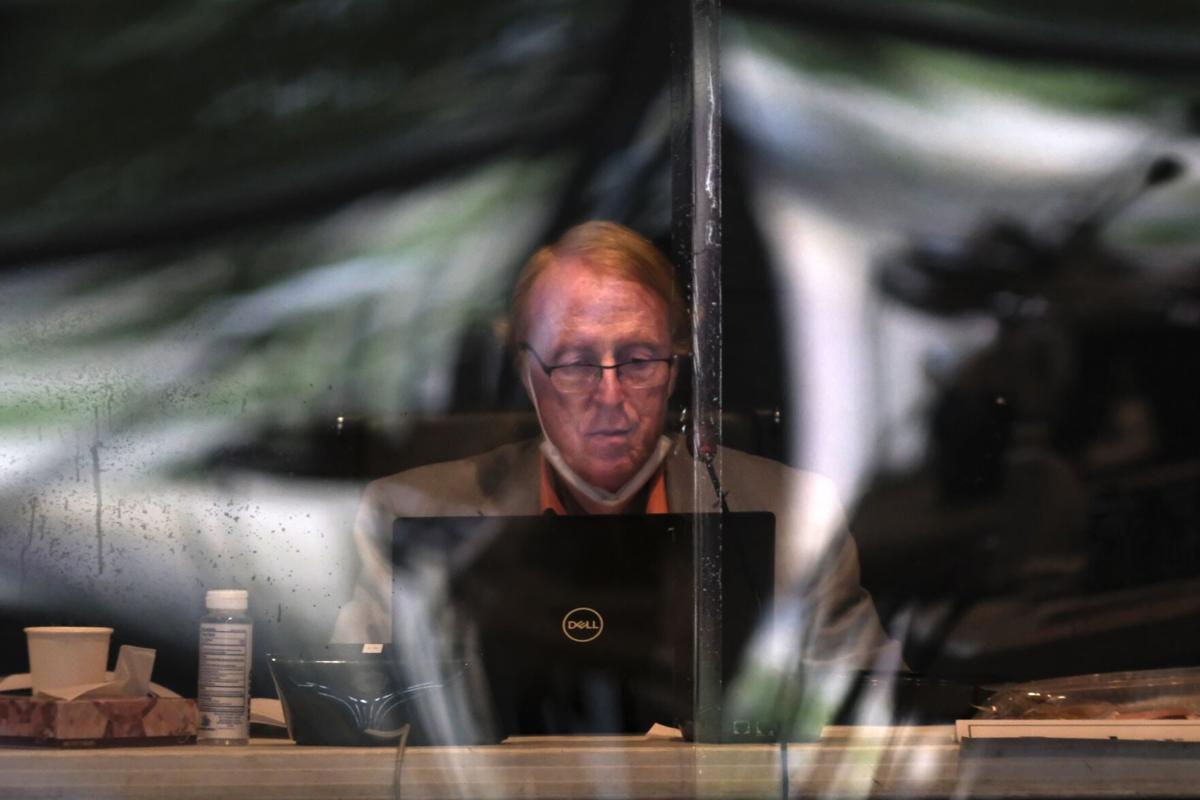 Sen. George Barker, D-Fairfax, sits in his “plastic box” during the Senate floor session in the temporary Virginia Senate chamber inside the Science Museum of Virginia in Richmond, VA Thursday, Sept. 10, 2020. He has been recovering from health issues and was given an extra layer of safety by the Senate Clerk for the special session. 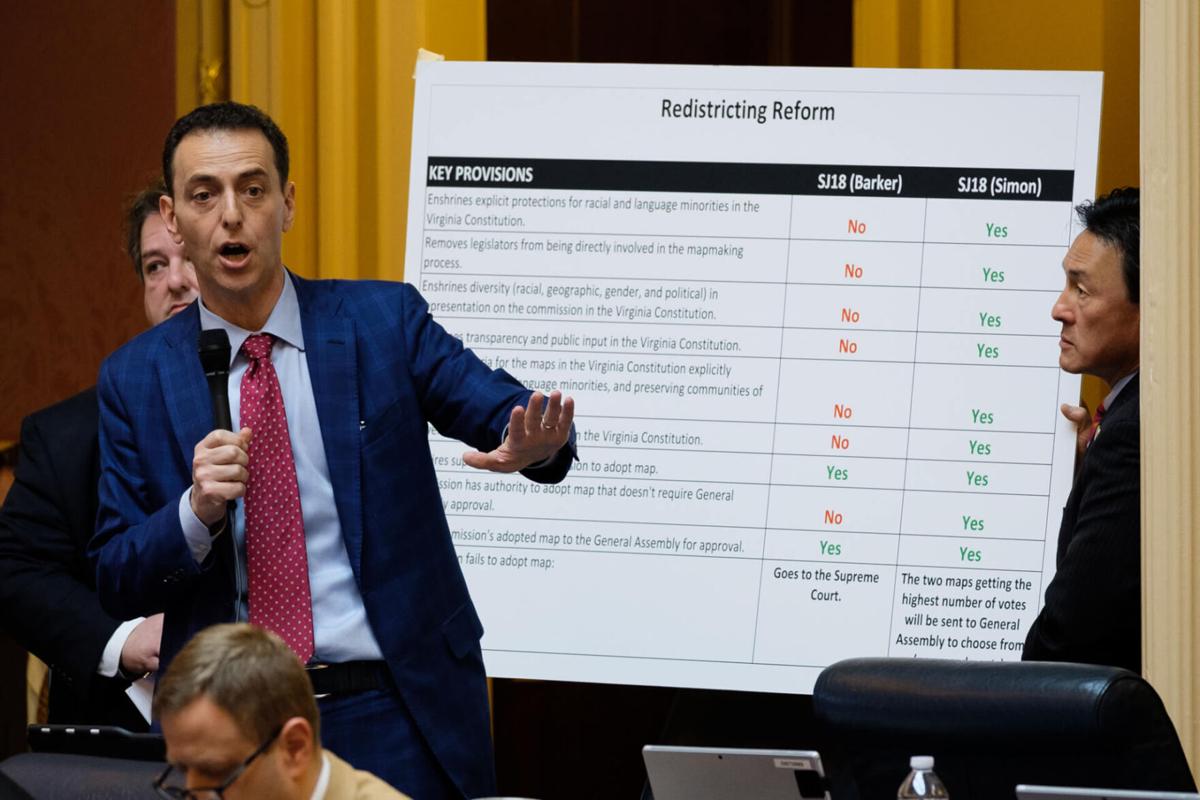 Del. Marcus Simon, D-Fairfax, argued unsuccessfully in 2020 for an alternative redistricting amendment that was supported by a majority of Democrats in the House of Delegates. 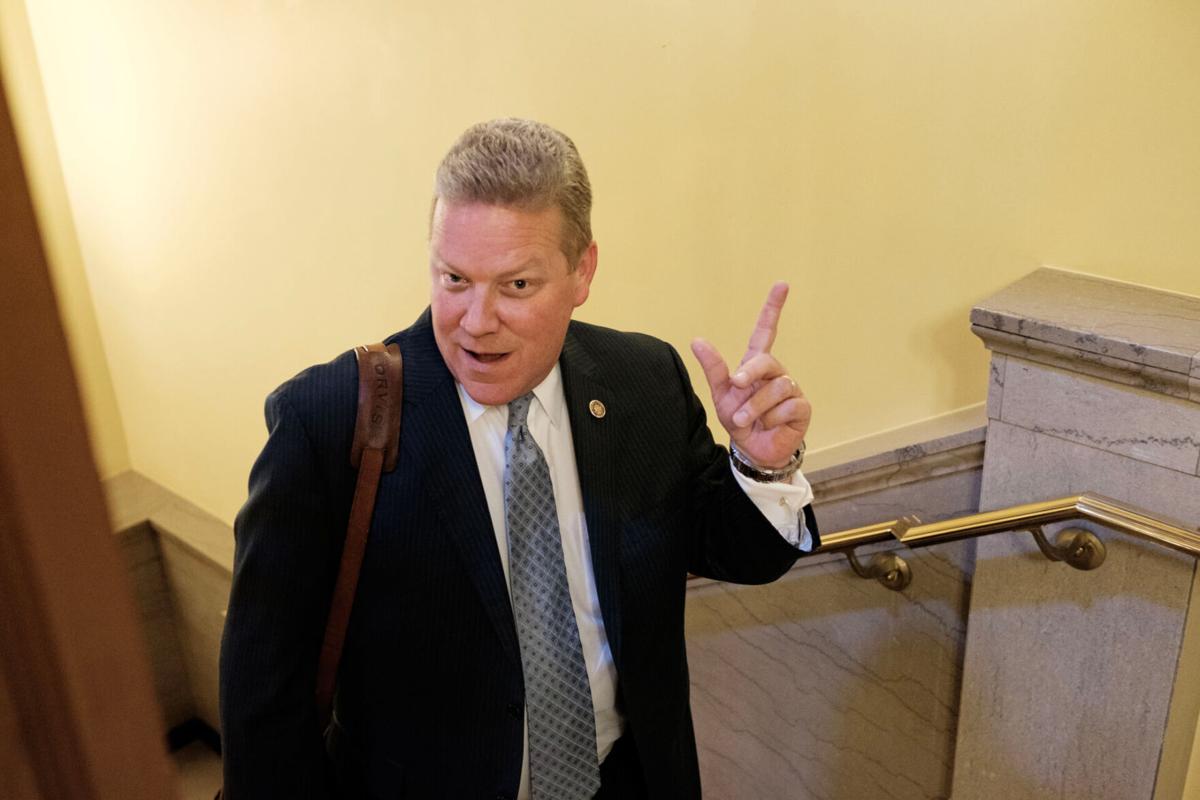 Stopping legislators from drawing their own districts was the main rallying cry behind the new Virginia Redistricting Commission voters approved last year. But one legislator is trying to do just that in full public view from his perch on the commission.

A week after noting a consultant-drawn draft map would push him out of his district, Sen. George Barker, D-Fairfax, drew an amended plan that shuffled just a few precincts, putting himself back in a Senate district with no other incumbents.

The attempt came as a shock to other commissioners, one of whom said it looked like the very thing Virginia voters voted overwhelmingly to end.

Explaining his proposal at a meeting Thursday, Barker said the draft map drawn by the commission’s Republican consultant could push him into a lopsided primary contest with Sen. Chap Petersen, D-Fairfax. It wouldn’t be a fair fight, he said, because most of the district falls under Petersen’s current turf.

“In a primary situation, the people who have been voting for him… they know him, they don’t know me,” Barker said. “And basically in a situation where he has 39 precincts and I have two, there’s no contest.”

He also argued his proposal kept a community of interest together within the Occoquan Watershed, a more rural part of the region that he says is united by certain zoning rules, water and sewer systems and “lots of cellphone problems.”

After Barker’s presentation, Democratic citizen commissioner Sean Kumar asked why the group would even entertain the idea of letting a legislator draw his own district.

“I’m not sure why we’re hearing this,” Kumar said. “This seems to me like it’s a statement of self-interest, not about good government or good districts.”

Mackenzie Babichenko, the commission’s Republican co-chair, said Barker’s map was “considered as a comment” and will have no impact unless the commission decides to do something with it.

In an interview with The Virginia Mercury after the meeting, Barker disputed that his proposal was purely about self-interest.

“I would do the exact same thing for any other senator who had a situation like this, Republican or Democrat,” Barker said. “I only do this because I happen to be the one who was impacted.”

Barker noted his proposal would have no partisan ramifications and require minimal changes to the draft lines drawn by the consultant. Barker has argued that keeping incumbents happy is a real concern that the commission might ignore at its own peril, a point he reiterated after Thursday’s meeting.

“This map has to be approved by both the House and the Senate,” Barker said. “And basically if you’ve pissed off and upset the lives of, let’s say 20 members of the House of Delegates, that doesn’t help it get passed. We need to get this map passed so that we can prove that we can do this in a bipartisan fashion that doesn’t favor either political party.”

Though the commission has access to data showing where all 140 General Assembly incumbents live, the panel has not formally incorporated that information into its process. Its draft maps for Northern Virginia were drawn from scratch, without regard to existing districts and incumbent residency.

It’s become increasingly clear that approach, which drew multiple incumbents into the same district while creating some districts with no incumbents, isn’t sitting well with some Northern Virginia Democrats.

Ken Strasma, a Democratic map-drawer working with the bipartisan commission, acknowledged Thursday that he had made some tweaks to his draft maps for Northern Virginia in response to concerns about incumbent pairing. He didn’t specify where those concerns originated.

One result of the edits was that Del. Marcus Simon, D-Fairfax, who also serves on the redistricting commission, was no longer paired with any other incumbents under the Democratic plan.

In an interview Thursday, Simon said he didn’t ask the consultant to make any changes on his behalf.

“I’m not unhappy that my district’s fixed,” Simon said. “But it wasn’t anything that I engineered or initiated.”

The commission’s Republican and Democratic map-drawers had not yet been given the data on incumbent addresses or any direction on how to use it. The Democratic consulting team explained Thursday that it used incumbency information from the Redistricting Data Hub website while working on its maps.

That didn’t sit well with Sen. Ryan McDougle, R-Hanover, who said consultants shouldn’t be seeking out and using third-party data without clear instructions from the commission.

“I have no idea who they are. But I know we didn’t do it. And we didn’t direct it,” McDougle said. “I use a P.O. box for most of my stuff. Is that where they have me living? I have no clue.”

Democratic attorney J. Gerald Hebert told the commission incumbency can be an important factor later in the process when the commission has to assess whether the statewide map unfairly favors or hurts one party or the other. A map that forces several senior Democrats into early retirement while leaving Republicans unbothered, for example, could arguably be construed as impermissibly friendly to the GOP.

By starting in Northern Virginia, the drafts before the commission deal mostly with Democratic districts, which has meant it’s mostly been Democrats raising concerns about incumbent pairing.

Though both Republican and Democratic plans paired numerous Democratic incumbents together in Northern Virginia, Simon caused a stir Thursday when he suggested partisanship may be a factor in decisions about who gets paired with whom, especially in areas where Republicans can’t “control the political outcome.”

“I’ll just be very frank about it,” Simon said. “If I were a Republican drawing Northern Virginia, my goal would be to duplicate as many incumbents as possible.”

“I do think you’re out of order,” Harrell said.

“Who are you!?,” Simon shot back before the meeting’s chairwoman cut off the exchange.

Simon later apologized, saying he was taken aback by Harrell speaking directly to him instead addressing his comments to the commission chairs per usual General Assembly decorum.

“I know exactly who you are,” Simon said. “You deserve to be here.”

Other commissioners argued that drawing clean maps was necessarily going to cause friction for incumbents, particularly those in densely populated areas who may currently benefit from gerrymandered lines.

“We’re not here to protect our own seats. Or our friends’ seats,” said Sen. Bill Stanley, R-Franklin. “This incumbency stuff, I think, is fraught with peril.”

Stanley was attending his first commission meeting after replacing Sen. Steve Newman, R-Lynchburg, who announced he was stepping down from the commission last week.

The commission is made up of 16 members, eight citizens and eight legislators, with equal representation from both parties and both General Assembly chambers.

The group has not yet voted on any maps but is planning to slowly build a cohesive, region-by-region proposal over the next few weeks. If a final map can be approved by the commission, it then goes to the General Assembly for an up-or-down vote. If the proposal can’t pass the legislature, the Supreme Court of Virginia will redraw the lines using its own consultants.

It remains unclear how the commission is planning to merge draft maps prepared by its Republican and Democratic consultants.

House Minority Leader Todd Gilbert, R-Shenandoah, sent the commission a letter Thursday urging the commission not to take votes on maps for certain regions without giving anyone a chance to see a statewide map and how regional plans interlock with each other.

After reviewing proposals for Northern Virginia without voting on them, the commission is planning to turn its attention to Hampton Roads and the Eastern Shore next week.