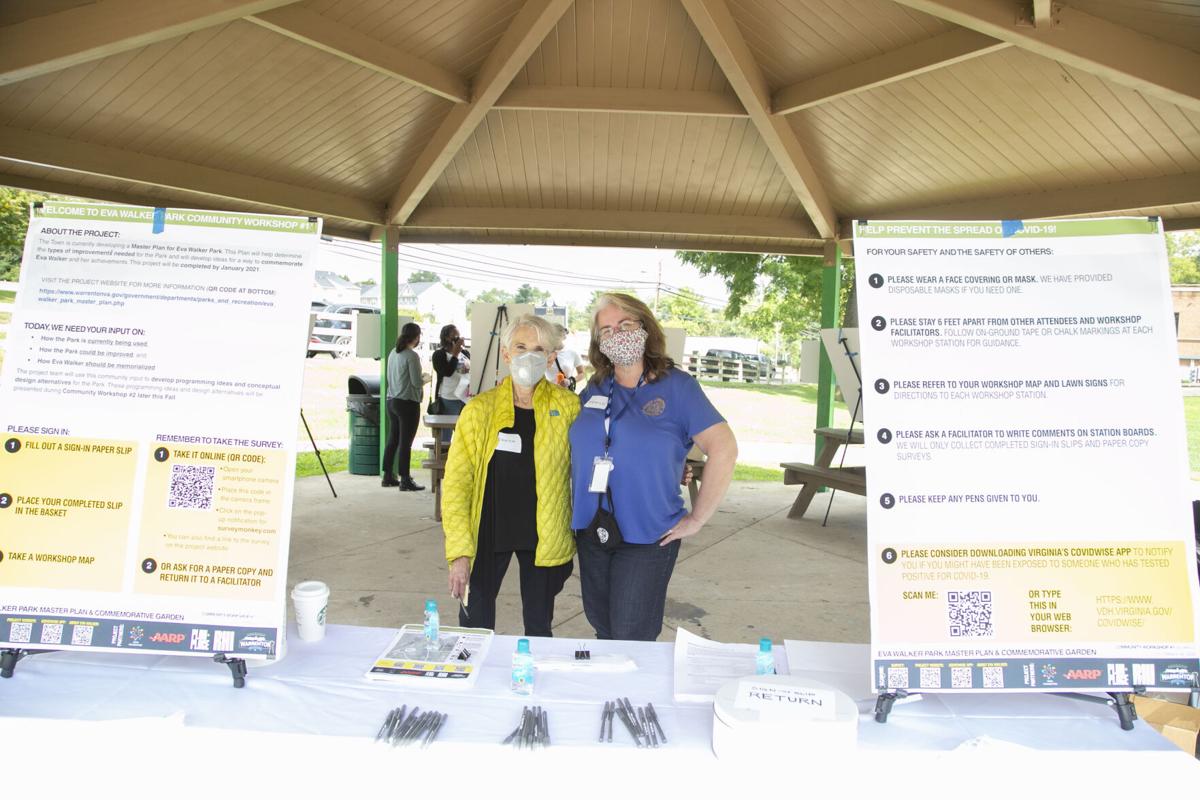 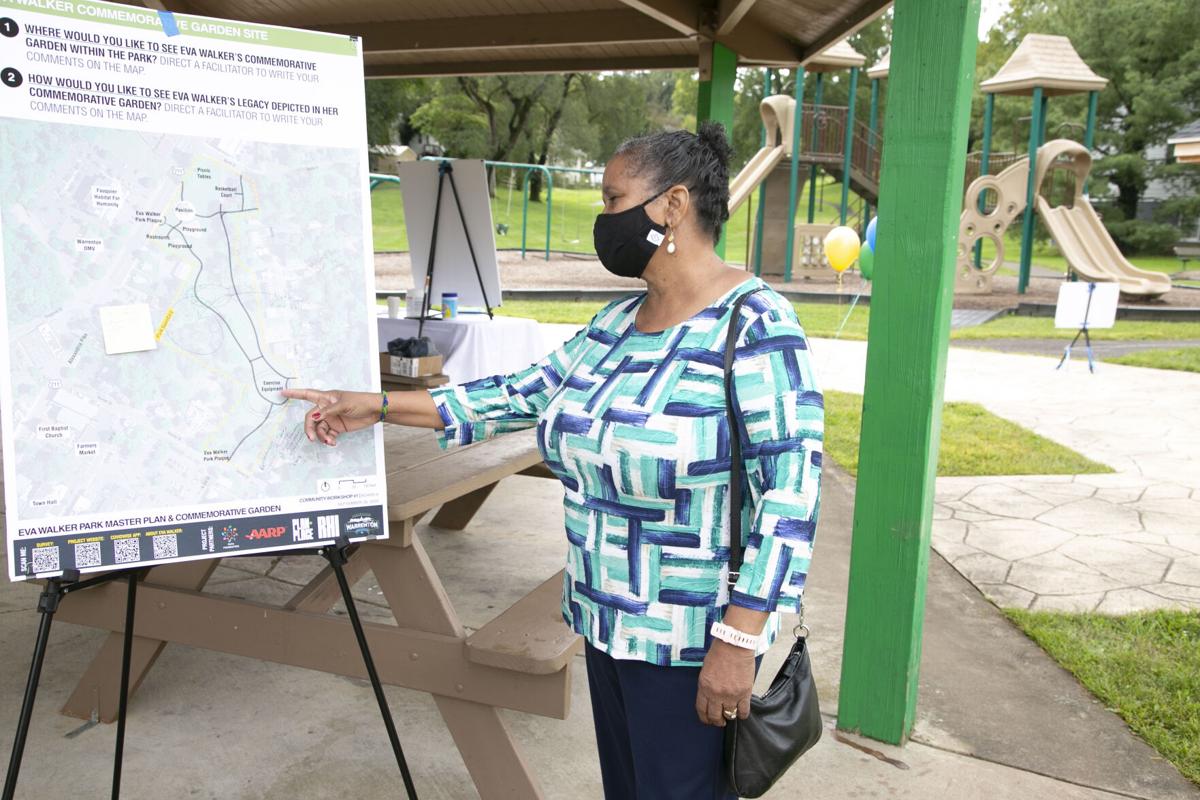 Christine Lewis wants to make sure there are places in the park where visitors can learn about the neighborhood’s history. 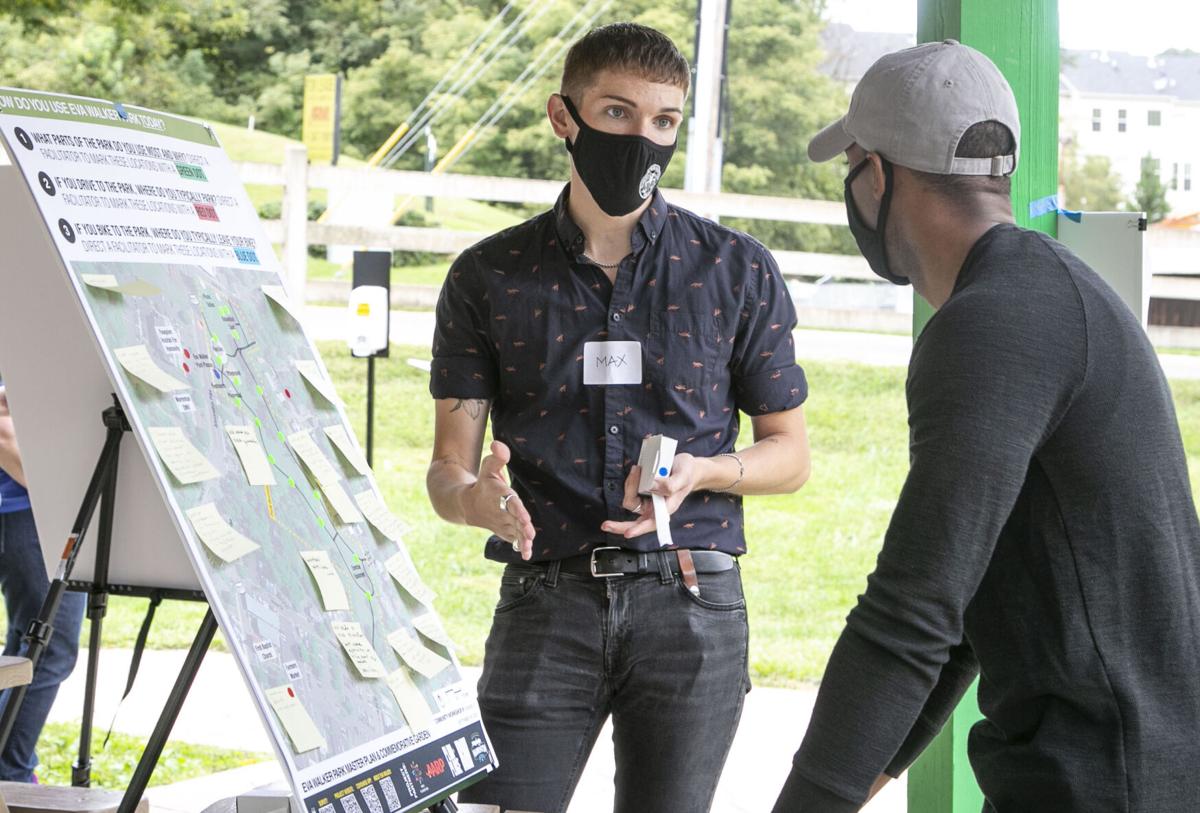 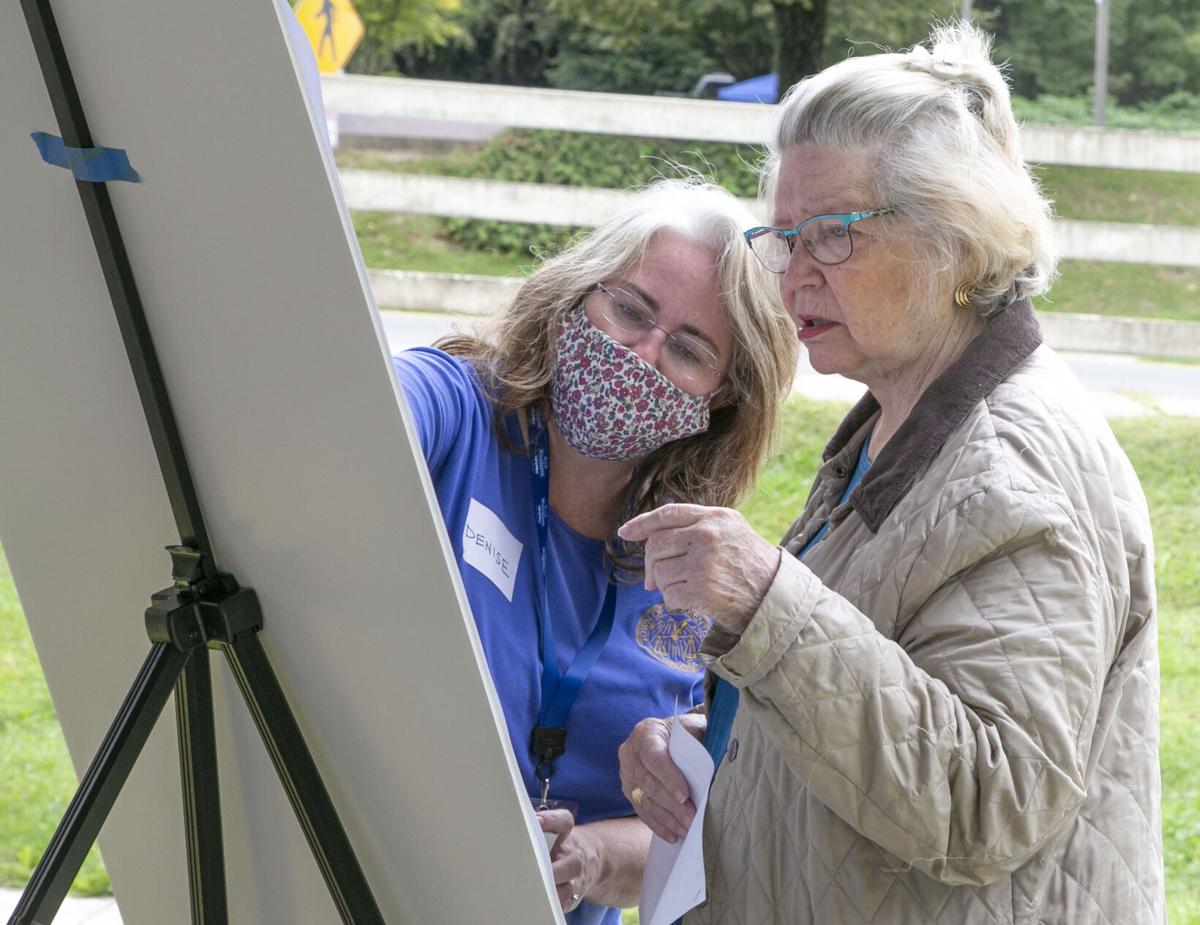 Carole Hertz, a member of the Warrenton Architectural Review Board, offered her thoughts on the future of Eva Walker Park to Denise Harris, Warrenton planning manager. 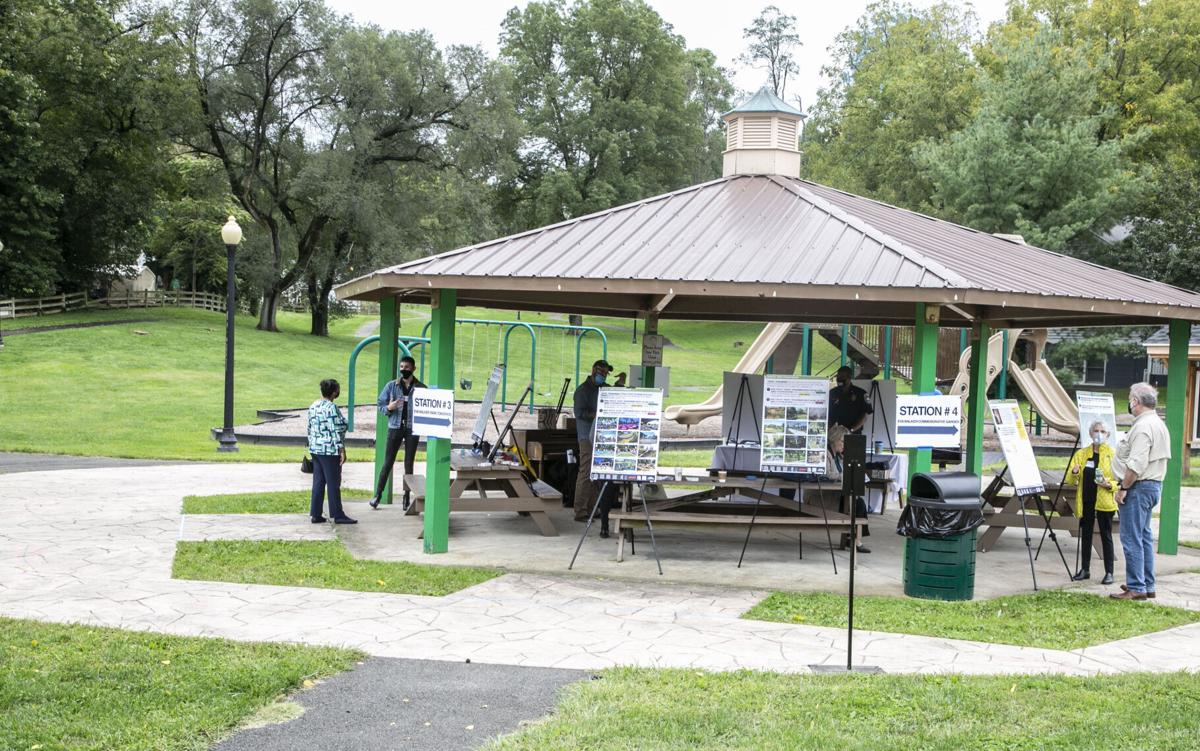 Representatives of the town of Warrenton and of Rhodeside and Harwell Incorporated (landscape architecture, planning and design firm) fielded questions and encouraged participants to share their stories and ideas for the park. 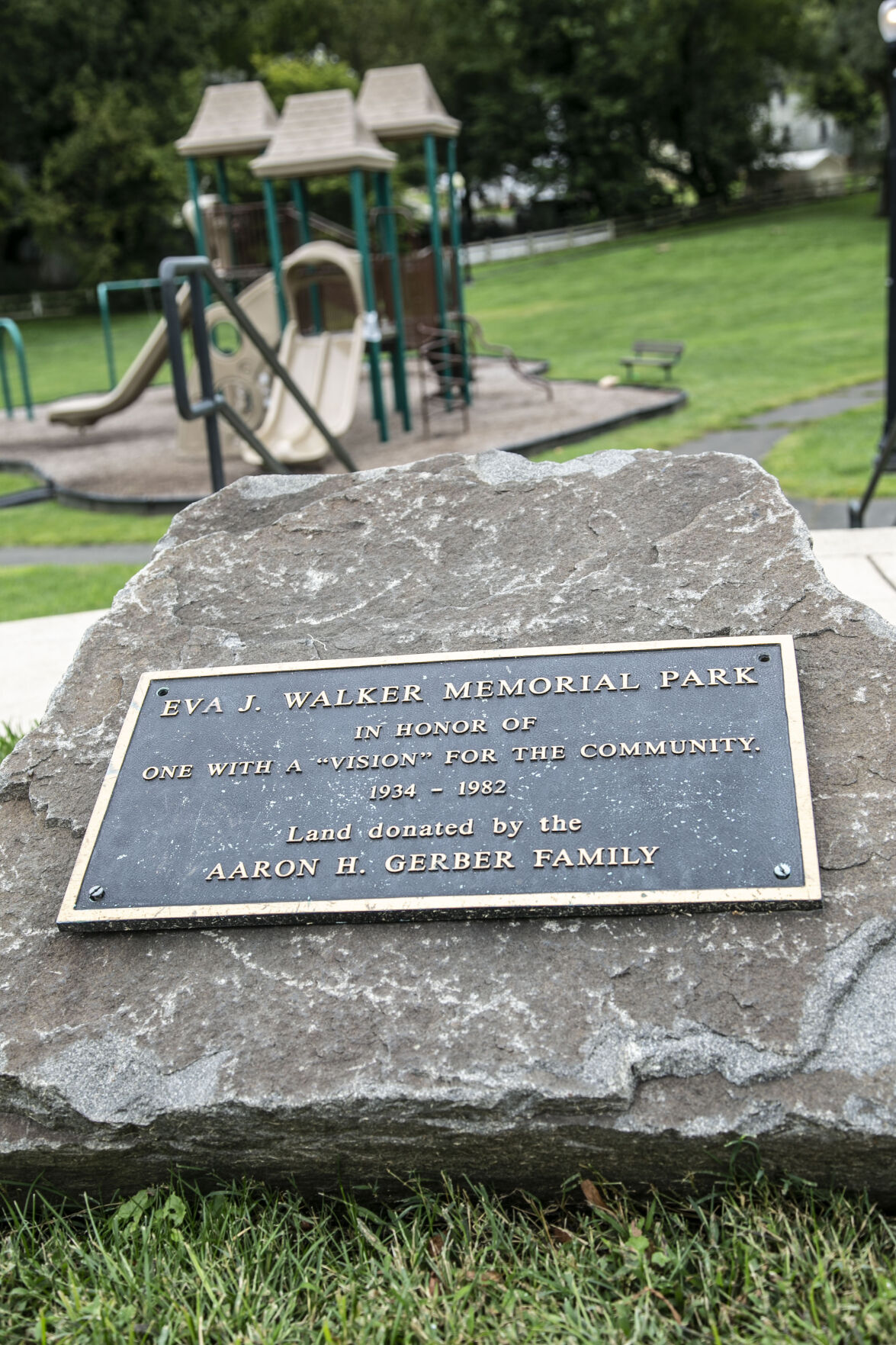 Eva Walker Park is named after a beloved resident of the Haiti neighborhood, who was also a principled community activist. 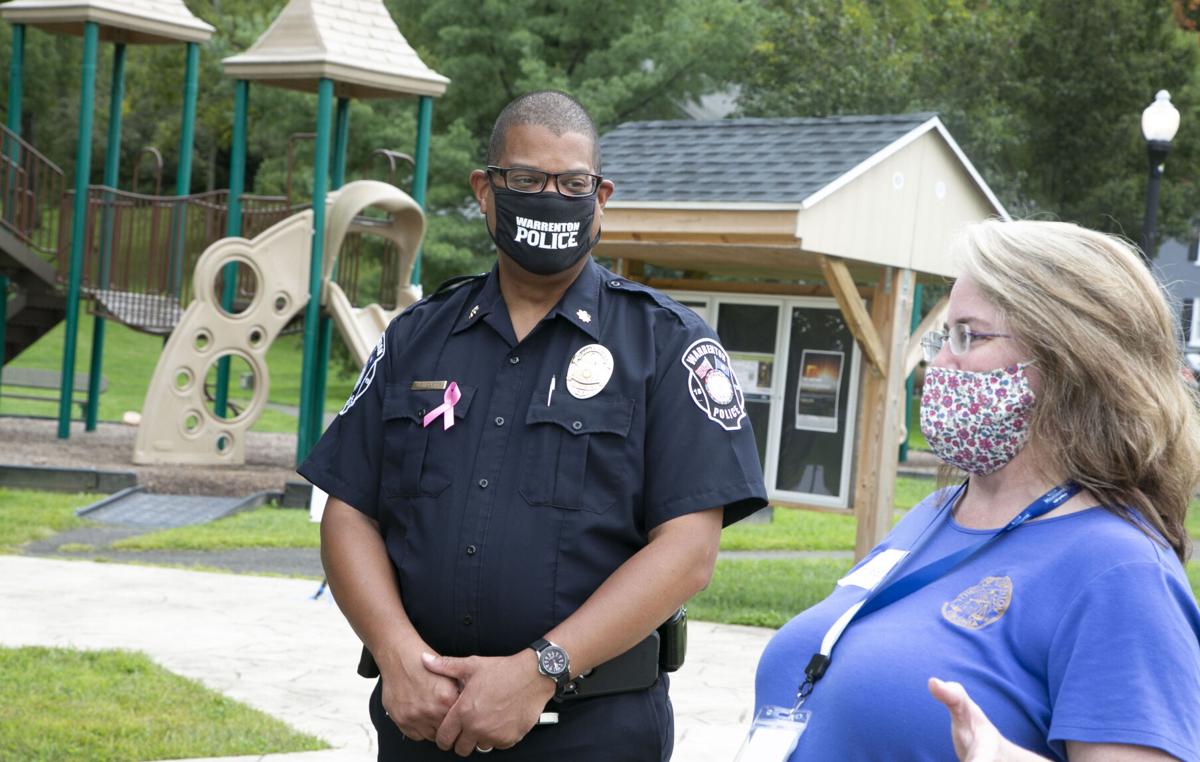 Christine Lewis wants to make sure there are places in the park where visitors can learn about the neighborhood’s history.

Carole Hertz, a member of the Warrenton Architectural Review Board, offered her thoughts on the future of Eva Walker Park to Denise Harris, Warrenton planning manager.

Representatives of the town of Warrenton and of Rhodeside and Harwell Incorporated (landscape architecture, planning and design firm) fielded questions and encouraged participants to share their stories and ideas for the park.

Eva Walker Park is named after a beloved resident of the Haiti neighborhood, who was also a principled community activist.

Warrenton’s Haiti Street residents had the opportunity Saturday to weigh in the future of Eva Walker Park, which borders their neighborhood; town officials organized an event to solicit ideas from residents about what improvements they’d like to see. Haiti Street residents were invited to come to the park from 10 a.m. to noon and other town residents came by from 12:30 to 2:30 p.m.

Some used the opportunity to remember the park’s namesake. Christine Lewis grew up on Haiti Street in the 1950s; Eva Walker and her husband Robert moved into the neighborhood when she was 6 years old.

“She was like family,” said Lewis about Eva Walker. “She was an activist, a liaison between people in the community and the town. When things went wrong in the community, something racial for instance, she would do something about it.”

Lewis continued, “She was very sweet, loving lady, and she loved Haiti. She was very involved in the schools.”

Lewis said that her aunt, Callie Bumbray, and Eva Walker started the Majorettes club for girls; they marched in local parades. “We were segregated back then.”

“Everyone knew Miss Eva and Aunt Callie,” said Lewis. Eva Walker operated a beauty salon from her home. “She drew a lot of people from all over,” said Lewis.

Mike Logan remembers Eva Walker, too. He was about 8 or 9 years old when she passed away in 1982; she was only 48. “She used to watch us at the bus stop every day.” Logan also remembers being in the fashion shows that Walker held every year. A DJ now, he said he got his start in music in the Walkers’ basement.

He remembered that every year, Eva Walker would organize a huge festival for the neighborhood, with horses for the kids to ride, carnival games. “Everyone would come together.”

Logan described Eva Walker as a godparent to everyone. “When it came to make action happen, she stood for the community, she got folks organized. Fauquier wasn’t always a positive place for people like me. There were obstacles.”

Warrenton Deputy Police Chief Tim Carter said Eva Walker’s husband, Robert – who still lives in the neighborhood – wanted the kids to be able to play in the park during the day and be able to get something to drink when they were thirsty. “He put a soda machine at the back of his house.”

Carter said he didn’t know that when he was on patrol one night and saw someone hanging out behind Walker’s home. “Mr. Walker came out and said, ‘no, no, it’s OK,’ and he explained about the soda machine.”

Carter said he’d often drive down to Haiti and talk to Walker on his porch.

Carter laughed and said he discovered years later that one of the Walkers’ daughters was his second-grade teacher. “She was my favorite teacher ever.”

Lewis said the Walkers also had a soda machine in their basement – and a pingpong table and a juke box. “It was a very inviting place to all the local kids.”

Lewis would like Eva Walker Park’s next iteration to have a historical element. “We could incorporate places where people could come together and learn about the history – not just about Eva Walker, but also about the history of the community.” From the pavilion near the park’s Alexandria Pike entrance, Lewis pointed to the other end of the park. “The section of the park near the Horner Street entrance isn’t being used much. It could be placed down there.”

There was discussion of a commemorative garden to honor Eva Walker, or perhaps steppingstones engraved with the names of important neighborhood residents. Town Councilman Renard Carlos (at large) suggested that perhaps benches – sponsored by local businesses or community members -- could be placed along walkways

Bill Semple, town councilman from Ward 2, would like to see a pavilion suitable for community concerts.

Darryl Neher, director of Fauquier Habitat for Humanity, is on the town’s advisory committee about the park. He said that he is “really interested to see what the community comes up with. At center, I’d like to see it made into a place where the community can gather.” He said accessibility is an important consideration. He pointed to the steps at the Alexandria Pike entrance, and said, “It needs to be inviting. It needs to be accessible for all.”

Neher added that the historical significance is important. “People are talking here today about memories that are three or four decades old.”

“A park is more than just a pavilion,” he said. “How do we create an environment that draws people in?”

On one of the Post-it notes pasted on displays provided by the town of Warrenton, someone wrote “A new soda machine, affordable, like Mr. [Robert] Walker’s in the back of his home!!”

That got Warrenton planning manager Denise Harris thinking outside the box: “Maybe we could use that as the way to share historical information. People could press a button on the soda machine and hear about the history!”

For those who could not attend Saturday’s event, an online survey may be found for another week at www.surveymonkey.com/r/evawalkerpark.