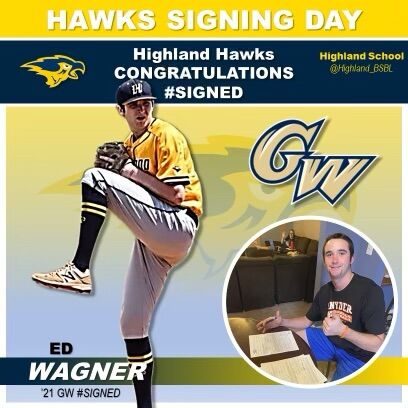 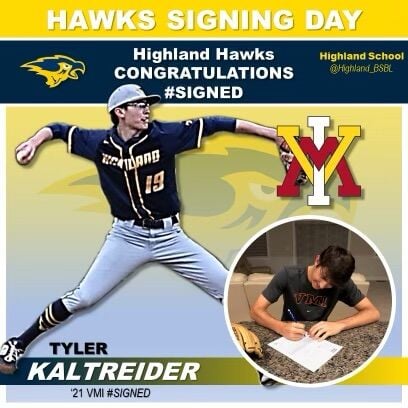 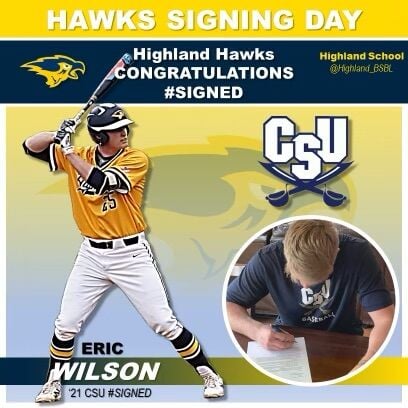 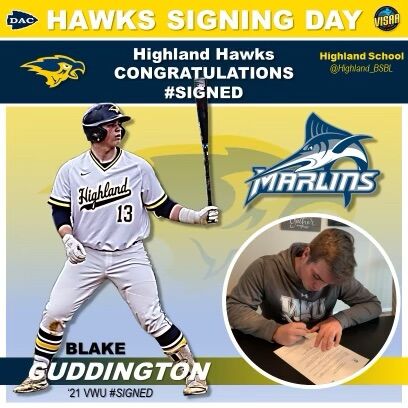 There’s no greater testament to the rise of the Highland School baseball program than this amazing stat.

Every Hawk senior has earned a college offer since 2019. “We’re 11-for-11,” said Highland coach Micah Higgins, citing a spectacular batting average for the red-hot Warrenton program.

Due to COVID-19, recruiting became challenging, as colleges struggled with roster decisions, and the landscape changed dramatically. “I feel blessed we found our seniors a home. It’s all about finding the right fit,” said Higgins.

College coaches locked up Wagner and Kaltreider in the fall of 2019, well before their junior years, while Wilson and Cuddington made their choices last summer. Highland played just four baseball games in 2020 before the pandemic cancellations, so there were no 2020 performances to evaluate.

“Colleges keep an eye on stats, but it’s more of how they project at the next level and the tools they see,” said Higgins.

Wagner is a 6-6, 225-pound righthander who attended Battlefield as a freshman, where he played JV baseball. He transferred to Highland for his sophomore year, joining a powerful team that made the state finals.

Wagner’s crowning accomplishment was his complete game victory in the 2019 VISAA Division 2 state semifinals, a 7-2 win over Greenbrier Christian. Wagner allowed four hits and two earned in seven innings with four strikeouts, and stymied a team that had five Division I recruits, according to Higgins.

“That was his coming out party. After that game interest picked up,” said Higgins.

He committed to George Washington in October, 2019, early in his junior year.

“GW was his first offer. A GW coach came to watch a fall game and five minutes into the game, he texted me, ‘OK, we want to get started on this kid.’ It was a quick process. Ed was on campus in the next two to three days, and they made an offer,” Higgins said.

Wagner is viewed as Highland’s top player for this spring season. He is talking to major league scouts. “There’s a good chance he’ll be drafted this summer,” said Higgins.

Wagner’s stock has risen due to his size and his rise in velocity, up to 93 MPH after throwing 81 as a sophomore.

Tyler Kaltreider, a Warrenton resident who has attended Highland for four years, committed to VMI in the fall of 2019. A starting pitcher and third baseman, he’s got size at 6-3 and interest in going to a military school.

“You’ve got to know what to expect, you’ve got to have thick skin, but it’s a great school to get a degree from. It sets you up for life,” Higgins said about VMI.

“He’s going to be an innings eater for us this year and help lead our starting rotation,” the coach said.

He emerged as the Hawks’ cleanup hitter and pitched once before the pandemic canceled things. “He generated a lot of D-1 interest. He’s a physical kid who’s got a pro body,” said Higgins of the 6-4, 220-pound Wilson.

“He’s a two-way player. He’s a corner infielder with a big bat. He’s a power hitter, who bats in the No. 3-4 hole. He’s another physical specimen who throws in the mid to upper 80s.”

Higgins said Wilson visited Charleston Southern over the summer “and fell in love” and committed in July. The Buccaneers have a new coach, Marc Macmillan, and compete in the Big South Conference.

Blake Cuddington will play at Virginia Wesleyan, a respected Division 3 program in the Old Dominion Athletic Conference. Located in Norfolk, Virginia Wesleyan went 22-17 in 2019 and 31-16 in 2018.

Cuddington is a 6-0, 230-pounder with a powerful bat. He also may pitch collegiately in a relief role. “He plays first base for us, supplies big power to our lineup and anchors the back end of our bullpen” said Higgins.

Will 2021 be Highland's state title year?

Since 2016, the Highland School baseball program is 86-20 with four 20-plus win seasons and three straight trips to the VISAA Division 2 Final…