The Fauquier County School Board used its Jan. 5 organizational meeting to give a green light to the school division’s winter sports season, despite concerns about community spread of the coronavirus.

Board members voted unanimously to allow the three high schools to begin their seasons on Jan. 6 as planned and permitted by the Virginia High School Sports League. (Guidelines from the VHSL may be found here.) Basketball, indoor track, wrestling and swim teams may hold tryouts beginning Jan. 6. Competition may begin Jan. 12. The regular winter season will conclude around Feb. 1. Sideline cheer squads will be allowed to participate as well, but their athletes will count toward the 25 maximum spectators allowed at games. 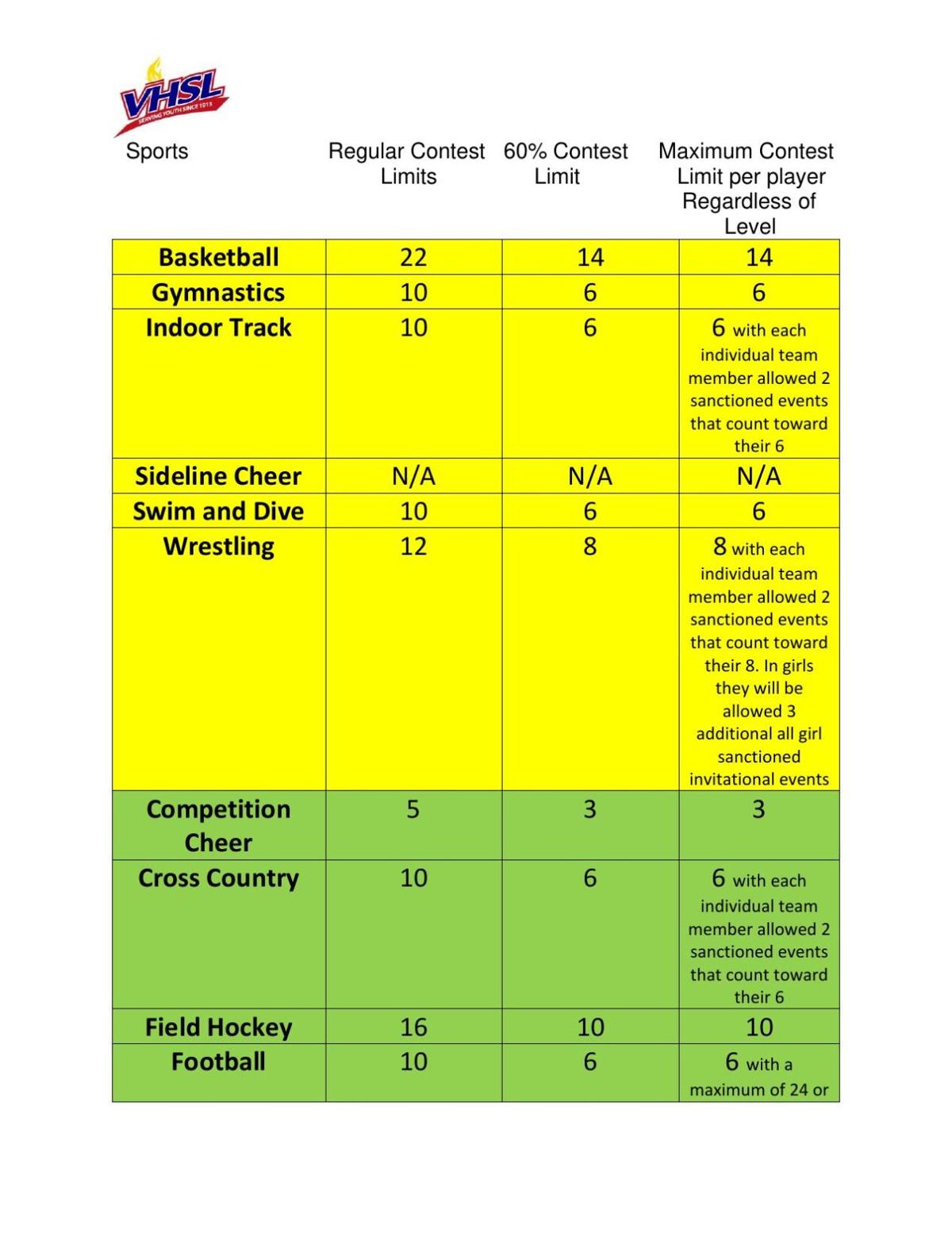 The decision represented a departure from the discussion at the board’s Dec. 28 meeting, when then-chairman Duke Bland (Marshall District) expressed hesitation about allowing students to participate in sports when they couldn’t be in the classrooms. (Fauquier County Schools will be operating under a remote instruction model until at least Jan. 19.)

Newly elected board Chairman Donna Grove (Cedar Run District) explained the shift in an email after Tuesday's meeting, “I think everybody had an opportunity to do some research and to talk with our high school folks.” 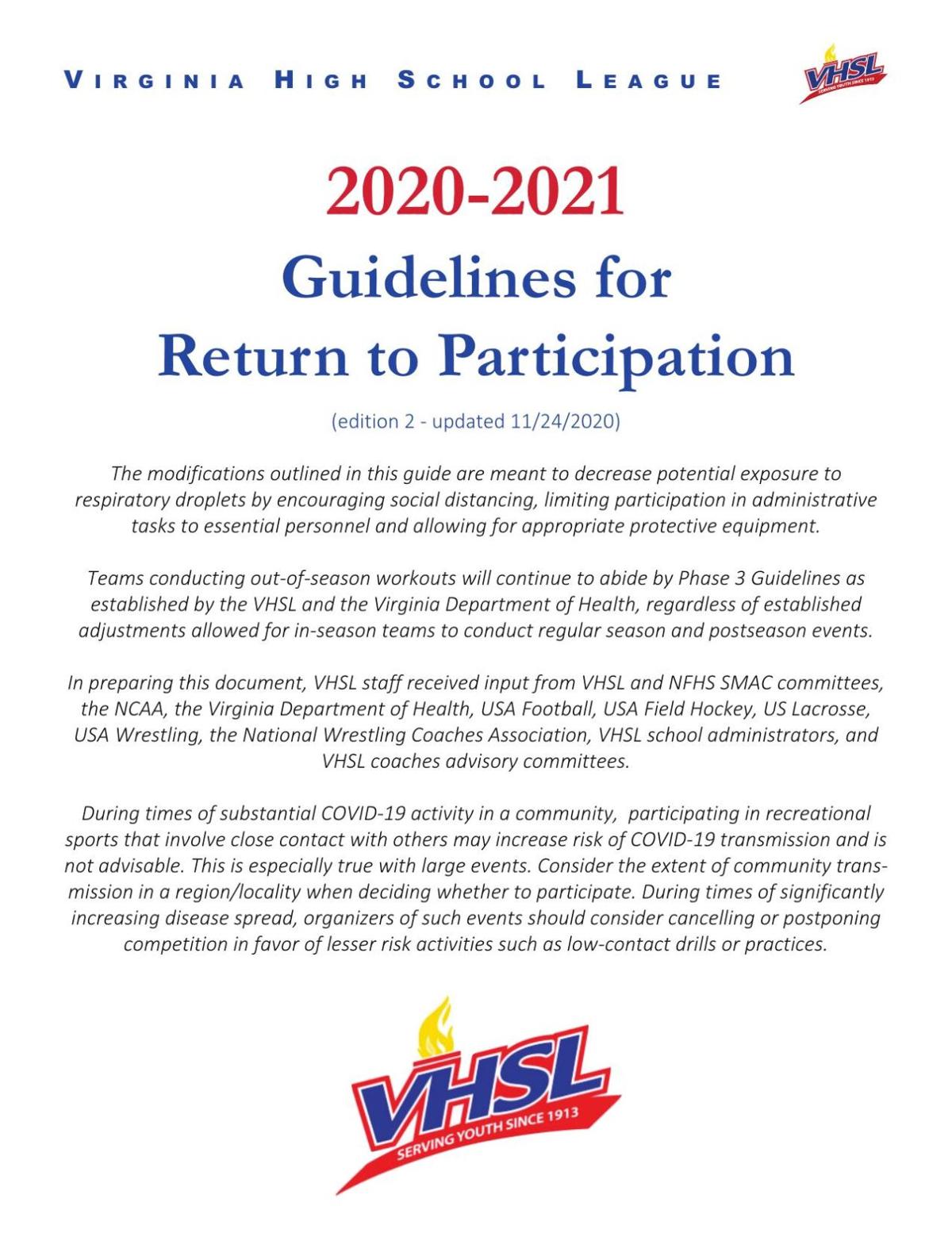 Bland said during the Jan. 5 meeting that he felt more comfortable because “athletic directors have reached out to me to ensure mitigation procedures will be in place.”

After the meeting he clarified, "I felt taking action on it that night (Dec. 28) would mean I would be making an uninformed decision. Since then, I have reviewed the 51-page VHSL guidelines and recommendations (specifically page 26 – wrestling) again and listened to and read coaches', athletic directors', principals', parents' and students' comments and came to the conclusion that we could indeed do this. Thus, I was able to make an informed decision this time!"

During the Jan. 5 discussion, which was attended by principals from Liberty, Fauquier and Kettle Run high schools and their three athletic directors, everyone agreed that the mental health of student athletes was at risk because they lacked the outlet provided by organized sports.

Sam Cox, LHS principal, spoke for his colleagues: “We have watched as other school divisions have returned to athletics… Student athletes thrive on competition... they are suffering from boredom and a lack of purpose.”

He said that students are suffering academically as well. “Our students should have the same opportunities to compete as other school divisions. And they should be able to compete for college scholarships…”

Cox said that the mitigation plan for competition has been “vetted and approved” by Frank Finn, assistant superintendent for student services and special education and is in line with other school divisions. Cox spoke for all of the high school representatives in supporting a return to athletics.

David Jeck, superintendent of schools, said that the mitigation plan for school athletics is “excellent, second to none. These people take their jobs very seriously,” but no details about mitigation were provided during the meeting.

Paul Frye, athletic director at LHS, said, “We are ready to start tomorrow…. They are chomping at the bit to get going.”

Litter-Reber asked if wrestling was to be included in the plan and Frye replied that athletic directors were recommending that all winter sports be included.

At the Jan. 28 school board meeting, Finn had indicated that wrestling was a particular concern during the COVID-19 pandemic because it requires close contact between students. “There is no way wrestlers can maintain social distancing,” he said.

At that meeting, other school board members agreed that if winter sports were to be reinstated, that wrestling might be excluded, but on Tuesday night, there was no will to prevent wrestlers from competing.

Grove said, “For me, discussions with both Paul Frye and Dean Spahr convinced me that wrestling should not be excluded.” She explained why, in her view, wrestlers were not at a greater risk than other athletes: “Mainly, the amount of time that a match will last -- five minutes. Basketball players are on the floor for 20 minutes, I believe, and often in very close contact. Both men felt very strongly about this.”

Susan Pauling (Center District) weighed in through an email Wednesday afternoon. She wrote: "I was very concerned about canceling wrestling and allowing the other sports to continue. We received many emails from parents and coaches begging us to allow a full winter season.

"I spoke with Mr. Ott from FHS and he assured me that wrestling had very strict guidelines for their athletes. He also believed that the plans in place for all sports would protect the athletes and limit the spread of the virus if an athlete should be exposed or test positive.

"I hesitated about voting on sports during the emergency meeting because I didn't have the information I needed to make an informed vote about excluding wrestling. At the time, I felt like the school board was divided and I wanted to give the athletic directors an opportunity to weigh in on what was best for all of our students. I am very glad we postponed the vote, gathered information, listened to our community and made an informed decision."

Several board members cited an outpouring of support from residents who want to see students back on the courts, on the mats and in the pools. Grove described with a smile “a few emails” she’d received about the issue.

Litter-Reber agreed, “I heard my constituents loud and clear.”

She also brought up marching band students being able to get back on the field as well and was assured that when the fall season begins, marching band students would be invited back. “I agree that students are subject to depression” during the shutdowns. “I want the band members and cheerleaders to have an opportunity for this mental health outlet as well.”

The following positions were approved at the Fauquier County School Board’s Jan. 5 meeting. Board members will serve in these positions until January of 2022.

Work sessions: 4th Monday at 7 p.m. at school board office or other location