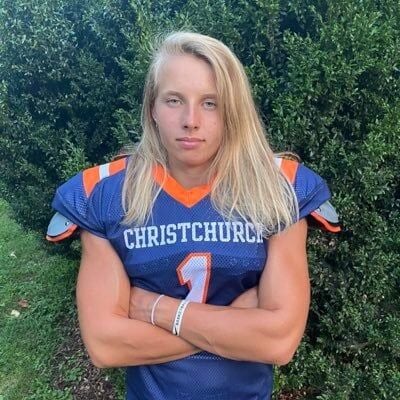 Shenandoah University football coach Scott Yoder said Haley Van Voorhis intercepted a pass at a recent practice.  “She came into camp in good shape and it is apparent she has been training most of the summer,” he said. 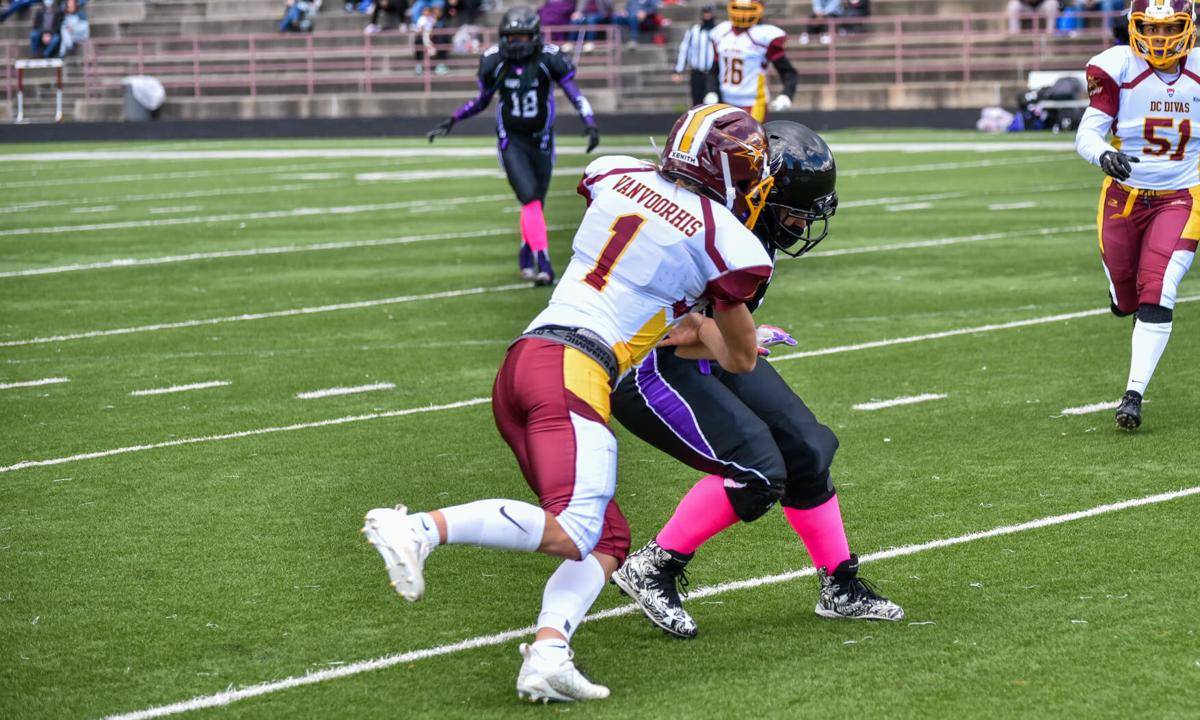 A resident of The Plains, Haley Van Voorhis, 18, will reportedly become the first woman to play NCAA college football in a position other than kicker. She’s a freshman defensive back at Division 3 Shenandoah University in Winchester and played in the spring for the D.C. Divas women’s team, pictured above.

Shenandoah University football coach Scott Yoder said Haley Van Voorhis intercepted a pass at a recent practice.  “She came into camp in good shape and it is apparent she has been training most of the summer,” he said.

A resident of The Plains, Haley Van Voorhis, 18, will reportedly become the first woman to play NCAA college football in a position other than kicker. She’s a freshman defensive back at Division 3 Shenandoah University in Winchester and played in the spring for the D.C. Divas women’s team, pictured above.

A week into the team’s practice schedule, he’s pleased with what he’s seen from Van Voorhis, a freshman defensive back who reportedly will become the first woman to play NCAA college football at a position other than kicker.

“She has been a great teammate. Haley made a nice play and intercepted a pass in a 11-on-11 drill and the defense was really excited about that,” Yoder said.

The 5-foot-7, 150-pounder from The Plains was recruited as a defensive back in December, 2020 after Shenandoah coaches liked her film and saw her at a scouting combine in Richmond.

Due to the pandemic, Van Voorhis missed the final year of football and lacrosse at Christchurch, but she stayed sharp playing with strong safety this past spring for the D.C. Divas of the Women’s Football Alliance.

She made the all-WFA team as a strong safety and recorded 21 solo tackles in the Divas’ five games.

That experience was legal under NCAA rules because she did it before full-time college enrollment and paid to play on the team, said her mother Heidi.

“She really was a terrific Diva, a terrific teammate, and a terrific football player,” Divas’ owner Rich Daniel said on the team website. “And at the age of eighteen, that is quite a statement to make about anybody. Whether it be a boy or a young lady.”

In an article on the Divas’ website, Van Voorhis said, “I got to be physically playing a lot more than I had before, so I was able to pick up new things, and keep myself playing football.”

Although she is a multi-sport standout who also shined in basketball and lacrosse, football captured her attention early. She began tackle football in sixth grade, and played in a Fauquier County boys league for three years.

She attended Kettle Run as a freshman in 2017, playing JV football as a wide receiver/defensive back. She transferred to Christchurch, a boarding school located near the base of the Rappahannock River in eastern Virginia, for her sophomore year and shined in basketball, lacrosse and football as a sophomore.

She played football again as a junior, but with the pandemic hitting, Christchurch's basketball season was cut short and lacrosse canceled. Her entire senior year of sports were cancelled, her mom said.

To fill the void, Van Voorhis trained diligently at home in The Plains and joined the Divas.

A trainer she works with recently posted a twitter video of Van Voorhis dead-lifting 315 pounds.

“No days off this past year until her one beach vacation week in July. We're proud of her tenacity and hard work,” said her mother Heidi. “We look forward to cheering on the entire Shenandoah Football team in September!”

Asked if she feels pressure, Haley told the Divas’ website said she’s aware some people are watching her.

“I’m out here playing football, having fun,” she said. “I mean, I do keep in my mind I’m the first and I gotta put a little extra 110% to prove to myself that women can do anything that maybe they’re not supposed to do. So, playing football is just a dream of mine, and now I’m able to do it.”

“Haley is playing defensive back and is doing well. She came in to camp in good shape and it is apparent she has been training most of the summer. This has served her well,” said Yoder.

“Haley has been extremely coachable and we look forward to watching her progress through the next few weeks.“

Shenandoah begins its season Sept. 4 with a home game against Methodist at 1 p.m.

After a nine-month absence due to the COVID-19 pandemic, athletics returned to the three public high schools on Jan. 6, 2021 for the first time since March 13, 2020.